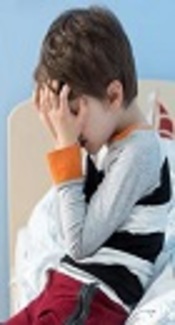 Enuresis has been defined as bed voiding at least twice a week for more than 3 consecutive months in individuals older than 5 years of age. Increased nocturnal enuresis could be possibly associated with dysfunction of autonomic nervous system. To observe autonomic nervous system function in enuretic children, the current study performed management of blood pressure.

In this study, primary non-monosymptomatic nocturnal enuresis and healthy children were enrolled and blood pressure was measured twice, in the morning and afternoon. Urinalysis, urine culture, and urinary system ultrasound were carried out for the patients. A diary on the daily fluid intake and volume of daily urine was required.

Repeated urine voiding in bed more than twice a week in 3 continuous months in a child, who is at least 5 years of age, is considered as enuresis (1). Diurnal enuresis defines wetting while awake and nocturnal enuresis refers to voiding during sleep. Children, who are never consistently dry throughout the night, are considered to have primary enuresis, whereas wetting resumption after more than 6 months of dryness is known as secondary enuresis (2, 3). Monosymptomatic enuresis has not association with daytime symptoms and non-monosymptomatic, more common enuresis, often has at least one subtle daytime symptom. Organic underlying abnormalities have been rarely associated with monosymptomatic enuresis (4, 5).

In adults, without considering gender, body size, or age, Hypertension (HTN) has been defined as blood pressure (BP) ≥ 140/90 mmHg (6). This, as a functional definition, is related to BP elevation levels with the likelihood of subsequent cardiovascular events. However, cardiovascular events associated with HTN, such as stroke or myocardial infarction, usually do not occur in childhood (7). Normative distribution of BP, includes tables such as systolic and diastolic values for the 50th, 90th, 95th, and 99th percentile by gender, age, and height percentile, in healthy children (8). Hypertension, as average diastolic blood pressure (DBP) and/or systolic blood pressure (SBP), has been defined as ≥ 95th percentile for gender, age, and height on ≥ 3 items (9). White coat HTN has been defined as medical setting BP levels ≥ 95th percentile and out of office normal BP (10). The Fourth Report has recommended staging of ≥ 95th percentile HTN (11). Furthermore, BP between 95th and 99th percentile and 5 mmHg as stage 1 HTN, and children with > 99th percentile HTN plus 5 mmHg as stage 2 HTN have been categorized. Asymptomatic stage 1 HTN, without target organ damage, allows evaluation before treatment while more evaluation and pharmacologic therapy are needed (12, 13).

Since HTN could be the causes of voiding dysfunctions, such as NE, it has been suggested to evalute the corelation of HTN and NE. In the current study, the researchers considered HTN effectiveness in primary nonmonosymptomatic nocturnal enuresis in males and females.

This was a case-control, hospital based study conducted at Amir Kabir pediatric hospital. Concordant with inclusion of every patient in the study, a child (above 5 years old) with the same gender, age, and demographic information was entered in the study, in case and control groups. Systolic and diastolic blood pressure was measured by a resident doctor, employing stethoscope and digital blood pressure monitor (CITIZEN REF CH-452). Patient were not allowed to eat for 1 hour and perform heavy activities for 30 minutes before the measurement. Firstly, a cuff was tied around the right arm and held the hand parallel to the heart. Age, gender, and height of the patient were considered in measuring blood pressure and diagnosing hypertension. The researchers employed a blood pressure monitor with an appropriate cuff. In a manner that the cuff’s width covered 2/3 of the child’s arm and its length tied around 80% of the arm. Usage of a small cuff may increasingly result in diagnosis of hypertension. In cases, for whom reassessment was needed, a one-minute interval between 2 measurements was considered or the experiment was repeated after holding the patient’s hand upward for 5 to 6 seconds; in most cases the experiment was repeated twice and results were recorded. In case there was a difference in results of the two tests (6 mmHg in systolic and 4 mmHg in diastolic blood pressure) or the blood pressure was high in the first test, the patient was allowed to rest for 5 minutes and then the experiment was repeated. The blood pressure in children was assessed in accordance with various diagrams in the 2 genders and considering height, weight, and BMI. Blood pressure percentile in children with enuresis was compared with children without it by measuring blood pressure in 110 samples.

All children with primary non-monosymptomatic enuresis were selected in accordance to Nelson book and diagnosis of pediatric nephrologist. Children with gastroenteritis or any other diseases that may effect blood pressure or children, who themselves or their parents lacked cooporation with blood pressure measurement were excluded.

Statistical differences of the 2 groups were calculated by SPSS21 and through the t-test and chi-square tests.

This study investigated the correlation between blood pressure and enuresis dysfunction in children. In this study, the greatest frequency in the case group was between 9 and 11 years old.

In one study, titled “24 hours investigation of blood pressure in enuresis patients”, which was performed by Bayrakci et al. during year 2013 in Turkey, children with primary enuresis were enrolled and their blood pressure was measured for duration of 24 hours and finally the results were compared with healthy children, however the current study lacked this 24-hour measurement. Urine analysis, level of electrolytes in the urine, urine culture, and ultrasound test of the urinary system were performed for all children. They concluded that, blood pressure during night was obviously higher in children with enuresis (14). In a study, entitled “Non-dipping phenomenon in children with monosymptomatic nocturnal enuresis” by Kahraman, a total of 45 children ranging in age from 6 to 15 years, affected by monosymptomatic nocturnal enuresis, as case group and 22 age-matched healthy children as control group, were enrolled. By 30-minute intervals and during a 24-hour period via an ambulatory BP measurement device, they measured BP. They observed that monosymptomatic nocturnal enuresis patients, compared to the control group, had significantly higher measurements (15). A study, titled “Prevalence of hypertension in healthy children in schools of Pakistan and its relationship with body mass index, proteinuria, and hematuria”, by Ajin, 2013, was performed to determine the prevalence of HTN in healthy children from Pakistani schools and its association with high body mass index (BMI). They concluded that HTN was strongly correlated with obesity, asymptomatic proteinuria, and hematuria (16), and this was in concordance with the current study results.

Case group patients had higher blood pressure (90% to 95% prehypertension, and 65% to 99% during Hypertension) in comparison with the control group and as they had higher BMI, thus it could be concluded that hypertension with increased body mass may effect primary enuresis in children. Considering different BMI in members of case and control groups, it is recommended to observe this factor in future studies to discover absolute impact of hypertension in primary non-monosymptomatic enuresis.

This work was performed in partial fulfillment of the requirements for the PHD thesis of Dr. Somayeh Bayat, from the School of Medicine, Arak University of Medical Sciences, Arak, Iran.