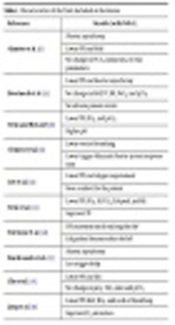 Neurally adjusted ventilatory assist (NAVA) is a novel mode of ventilation that coordinates the mechanical ventilator and the patient via electrical impulses of the diaphragm. Using these impulses as neural triggers, the patient’s respiration synchronizes with the ventilator. Ventilation with NAVA has successfully been performed in adults with various lung diseases but the application of NAVA in neonates is a novel issue.

The aim of this review study was to emphasize the NAVA as a new way of neonatal ventilatory support and the importance of ventilator-neonate synchrony in neonatal intensive care units.

The review of 10 studies showed that asynchrony was less frequent when using NAVA than when using the pneumatic modes of ventilation. Most of the studies observed a reduction in peak inspiratory pressure (PIP) and FIO2 with NAVA. A reduction in mean airway pressure and work of breathing and an improvement in gas exchange were also observed in some of the studies.

We concluded that according to recent studies, the NAVA should be administered in neonates for better synchronization with ventilator and improving the gas exchange and outcomes.

Asynchrony between mechanical ventilation and spontaneous breathing of the patient can lead to ineffective ventilation and adverse outcomes including increased inspiratory pressure, intracranial hypertension, and fluctuation in blood pressure. Diaphragmatic electromyography (EMG) was first used by Petit et al. in 1959 to evaluate respiratory muscle function (1). Sinderby and Beck expanded this concept with the introduction of embedded electrodes in a nasogastric tube to detect diaphragmatic EMG signal (2). This signal reflects the patient’s neural respiratory drive in real time and minimizes artifacts and noises (2). This new minimally invasive bedside technology has been integrated into a commercially available mechanical ventilator (Servo-I, Maquet, Solna, Sweden) that transmits the electrical impulses into a specific assisted breath known as neurally adjusted ventilatory assist (NAVA) (3-5).

This new mode mainly has been employed in the weaning of children from the respirator after cardiac surgery (6). In the neonatal period, weaning is easier to do with the NAVA (7). The NAVA is limited to use in conditions such as neuromuscular diseases, diaphragmatic hernia, and esophageal atresia.

This review study summarizes 10 studies of NAVA application in the neonatal period (Table 1).

Table 1. Characteristics of the Trials Included in the Review

Relevant studies were searched in MEDLINE from Jan 1950 to Feb 2017 using keywords including NAVA, neurally adjusted ventilatory assist, ventilator, and newborn. The publication type was limited to controlled trials. Other sources also were searched, such as EMBASE (Jan 1980 to Feb 2017). We also included studies that used NAVA in comparison with conventional pneumatic ventilation. All studies that used NAVA in the neonatal period were deemed acceptable.

In Breatnach et al. study (9), patients were ventilated with pressure support ventilation for 30 minutes, followed by the NAVA mode for four hours. The neural way was better than the pneumatic way in the synchronization of triggering and termination. After 30 minutes, a 28% reduction in PIP was observed with the NAVA mode, reaching a 32% reduction after 3 hours, without any change in MAP, minute ventilation, tidal volume (TV), respiratory rate (RR), pulse rate, PaO2, and PaCO2. No adverse patient events or device effects were observed.

Stein and Howard (10) examined 52 patients in the neonatal period that were ventilated with conventional or NAVA modes. The parameters of ventilation and ABG were compared in conventional and NAVA modes, along with their complications. PIP and FIO2 were lower, but pH and pCO2 were higher in the NAVA mode. These parameters sustained for 24 hours. They concluded that in preterm neonates, NAVA improves gas exchange and lowers the PIP and O2 requirements compared to conventional ventilation.

Clement et al. (11) examined 23 patients with bronchiolitis from the neonatal period up to two years of age. The patients were ventilated for 120 minutes with either NAVA mode or volume support. Lower trigger delay (40 vs. 98 ms) and lower system response time (15 vs. 36 ms) were observed in the NAVA mode. The work of breathing was also lower in the NAVA mode.

Stein et al. (13) studied five premature neonates. The patients were ventilated with the NAVA mode for four hours that changed to PC (pressure control) for another four hours. This cycle was repeated three times. Patients with NAVA had lower PIP, FiO2, transcutaneous pCO2, electronic activity of diaphragm (Edi) peak, and respiratory rate while the tidal volume was higher with NAVA.

Firestone et al. (14) studied the effects of changing the NAVA level on PIP and electrical activity of diaphragm in premature neonates. Nine patients in the neonatal period were studied with the NAVA mode and another 12 patients with the non-invasive NAVA (NIV-NAVA) mode. The peak inspiratory pressure increased to the break point (BrP) and then remained unchanged. Edi gradually decreased after reaching the BrP level. Neonates showed a BrP level that protected the lung parenchyma from overdistention.

Zhu et al. (16) studied 21 patients that had been operated for CHD with a mean age of 2.9 months and mean weight of 4.2 kg. The infants were ventilated with the NAVA and PSV modes for one hour. PIP and Edi were lower in the NAVA mode than in the PSV mode. After extubation, Edi was larger in patients that needed non-invasive mode or reintubation than in patients who extubated successfully (30.0 - 8.4 vs. 11.1 - 3.6 mV). There were no changes in pulse rate, blood pressure (BP), central venous pressure (CVP), paO2: FiO2 ratio, and pCO2.

Jung et al. (17) compared conventional pneumatic ventilation with NAVA in 29 preterm infants with bronchopulmonary dysplasia (BPD). The values of various ventilatory variables and other measurements were measured one hour before NAVA and 1, 4, 12, and 24 hours after conversion to NAVA. The NAVA significantly improved the PIP, MAP, and work of breathing. Lower FIO2 and improved oxygen saturation were also observed after NAVA. This study suggests the possible clinical utility of NAVA as a weaning modality for BPD in the NICU.

NAVA is gaining attention as a functional modality for neonatal ventilation. The most important finding of the reviewed studies was that asynchrony was less frequent in NAVA compared to pressure and/or flow-triggered ventilation. Other significant findings are as follows:

1- Most of the studies observed a reduction in PIP and FIO2 with NAVA.

2- Some of the studies observed a reduction in MAP and work of breathing with NAVA.

3- Some of the studies observed the improvement of gas exchange with NAVA.

Based on a growing body of literature, it appears that NAVA improves the patient-ventilator synchrony, abolishes ineffective efforts, results in improved gas exchange, and reduces the need for increasing the ventilator parameter in the neonatal period. There was neither complications nor adverse effects with NAVA. Thus, this novel method should be administered in all neonates with respiratory distress for increasing the synchrony with the ventilator and improving the gas exchange.

Copyright © 2019, Journal of Comprehensive Pediatrics. This is an open-access article distributed under the terms of the Creative Commons Attribution-NonCommercial 4.0 International License (http://creativecommons.org/licenses/by-nc/4.0/) which permits copy and redistribute the material just in noncommercial usages, provided the original work is properly cited.
download pdf 94.60 KB Get Permission (article level) Import into EndNote Import into BibTex
Number of Comments: 0