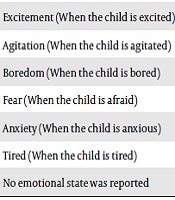 Maternal education, parental attitudes toward sexuality and family sexuality, and stress and violence in the family are associated factors in sexual behavior (8, 9), which have been overlooked in Iran.

This is a descriptive cross-sectional study conducted over 24 months from 2015 to 2017. In this interval, 600 children with the age range of 2 - 12 years were brought to an outpatient child and adolescent psychiatric clinic in Ahvaz with different complaints.

The inclusion criteria were the age range of 2 - 12 years and completion of the informed consent by parents. The exclusion criteria were the absence of a parent or primary caregiver who had detailed information about the life of a child and his/her activities; therefore, the impossibility of taking a precise history .[a1] Two children were excluded from the study because they were brought to the clinic by their aunt or grandmother; therefore, taking a precise history was impossible.

- Parents were asked to complete a questionnaire to obtain demographic features, including ethnicity, education, age, and birth order.

Schoentjes et al. reported that internalizing and externalizing behavior scores on the Child Behavior Checklist (CBCL) is significantly associated with sexual behavior. Children with serious behavioral and emotional problems tent to show a broader range of behaviors, including excessive sexual behavior on the CBCL (9). It is also probable that, comorbidity of psychiatric disorders in children, prevent the effective parenting by parents.

In the current study, most of the children’s mothers had bachelor’s degrees (the highest educational level in this sample). The finding was similar to previously published studies, finding the sexual behavior was related to maternal education (9, 20). Educated mothers probably felt more comfortable with report their children’ sexual behavior or probably because they were more observant of their children (20).

The subjects were selected by convenience sampling; therefore, the findings should be generalized to other groups with caution.

The authors thank the children and their parents for their cooperation.