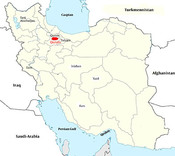 Children sleep disorder (CSD) is one of the most common disorders in children with a high prevalence shown by some studies.

We aimed to determine sleep patterns and factors affecting CSD among 7-12-year-old children.

In this cross-sectional study, 20 elementary schools for boys and girls were selected using stratified-clustering sampling, and 661 students were invited to participate in the study. Children’s sleep habits questionnaire (CSHQ) was used to investigate sleep patterns among the children. A multiple linear regression with backward approach and correlation coefficients were used to determine the factors affecting children’s sleep and inter-correlation between subscales, respectively.

Given the high CSD prevalence and its impact on children’s behavioral disorders, it is recommended carrying out further studies to understand the etiology and formulating plans to increase the awareness of CSD among parents.

Children sleep disorder (CSD) is one of the most common disorders in children. It has gained a growing trend in recent years around the world (1). Studies indicate that 10 - 75 percent of children in the world suffer from CSD, which may be in the forms of simple bedtime resistance, frequent sleep-waking, parasomnias, and obstructive sleep apnea (2). Chronic sleep disorder is concerned because of its association with reduced physical growth and school performance (3), along with increased chances of depression and anxiety (4).

Different countries have shown diverse results with respect to sleep patterns in children. It has been seen that sleep duration is shorter in Asian countries than in other countries approximately by one hour. For example, Chinese children go to bed 32 minutes later and wake up 32 minutes earlier, and therefore their sleep duration is one hour shorter compared to their American counterparts (5). On the other hand, 5% of the Australian children have less than 3 hours of sleep per day (6). The different prevalence of CSD in different communities indicates a variation in sleep patterns among populations (7-9). The difference in sleep patterns among different populations may be due to cultural, social, economic, and environmental variations (10); thus, it is suggested investigating CSD locally among different communities for better health planning (7-10).

Although there are various tools to investigate CSD (11, 12), children’s sleep habits questionnaire (CSHQ) is one of the tools that has been recently developed to assess CSD. This tool, designed by Owens et al. (13), indicates the status of children’s sleep disorders according to the most common manifestations. Various studies were conducted in Iran concerning sleep and health status (1, 14-16). However, the status of CSD among 7-12-year-old children has not been studied. 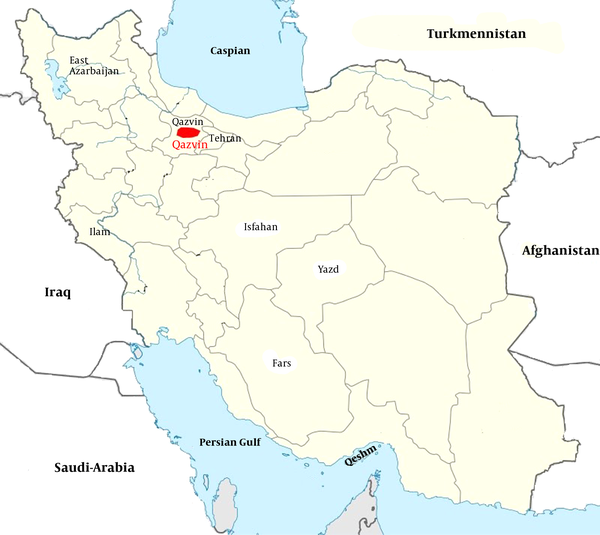 The location of Qazvin province

The sample size was calculated given α = 0.05 and β = 0.2. Considering cluster sampling and given an intra-class correlation coefficient of 0.3, the sample size was estimated at 661. Children with developmental disorders (such as ADHD and autism) and those using medications with possible effects on sleep (CNS stimuli, anticonvulsants, antihistamines, etc.) were excluded.

The children’s sleep habits questionnaire (CSHQ) was used to assess children’s sleep habits and sleep patterns. The questionnaire consisted of two parts: the first part included demographic information, and the second part comprised 35 questions regarding the sleep patterns and sleep habits of children. This part was divided into 8 subsections: (1) bedtime resistance, (2) sleep onset delay, (3) sleep duration, (4) sleep anxiety, (5) frequent night waking, (6) parasomnia, (7) respiratory diseases, and (8) daytime dizziness. A higher score on each subscale suggested a worse status. According to the suggestions of Owens et al. (13), a child with a score of 41 or higher would be considered to have a sleep disorder. The reliability and validity of this tool were assessed in a study conducted by Fallahzadeh et al. (17). In order to collect the data, a packet containing a consent form, a guideline for completing the questionnaire, and the CSH questionnaire was given to the parents, and they were asked to return the packets after two weeks. Parents who failed to return the packet were considered as reluctant to participate in the study.

Stata 11 was used for data analysis. The mean and 95% confidence interval were used for describing quantitative variables and the percentage was used for qualitative variables. A multiple linear regression with backward approach was used to investigate the relationship between demographic variables and CSHQ and its subscales. In this approach, all variables were entered into the initial model, and those with a higher p-value were excluded from the model. This step was repeated until variables with p-values of less than 0.05 left in the model. In order to estimate the inter-correlation between the subscales, the Pearson correlation coefficient (r) was used. The Cluster effect was taken into account to improve the standard error of all analyses. The significance level was set at 0.05. The present study was approved by the ethics committee of Qazvin University of Medical Sciences.

Table 2. The Mean (SD) and 95% Confidence Interval of CSHQ and Their Subscales in 7-12-Year-Old Children

aJust variables that have a significant association, remained in the model.

The results of different studies on CSD should be compared with caution, because the difference in research findings may be due to the socioeconomic variation in different populations and the diversity of the tools used for measuring CSD. According to the findings of the current work, the prevalence of CSD was 89.6 percent. In other words, of every 10 children, almost nine had CSD. This value is much higher than the prevalence of CSD reported among children from Australia (24.6%) (8), India (42.7%) (7) and Saudi Arabia (37.5%) (9). However, this difference can be partly due to the structural differences in the communities, such as cultural and social factors influential on children aged between 7 and 12, which may affect other aspects of their lives, especially their sleep (10). Our opinion is that these differences can be mainly due to the difference in the type of instrument used to measure CSD.

One of the most important findings of our study was its analytical part. According to the findings of the current study, school grade had an inverse significant relationship with sleep-disordered breathing, sleep anxiety, bedtime resistance and the total score of CSHQ (Figure 2). Consistent with the current study, Owens et al. showed that children with higher grade showed a reduced mean score of bedtime resistance (18). In our opinion, individuals with higher school grade show reduced bedtime resistance because they experience less stress due to their more familiarity with the school environment, and their reduced stress may reduce bedtime resistance (19). Of course, it should be noted that school grade is a proxy of age. Thus, increasing age may be a reason for observing such a relationship. The current study rejected the effect of age on sleep anxiety, sleep-disordered breathing, and bedtime resistance and they were eliminated from the final model. However, Blunden et al. (8) in their work showed that age has no independent effect on sleep breathing disorders. On the other hand, other studies have shown the effect of age on sleep breathing disorders (20, 21). 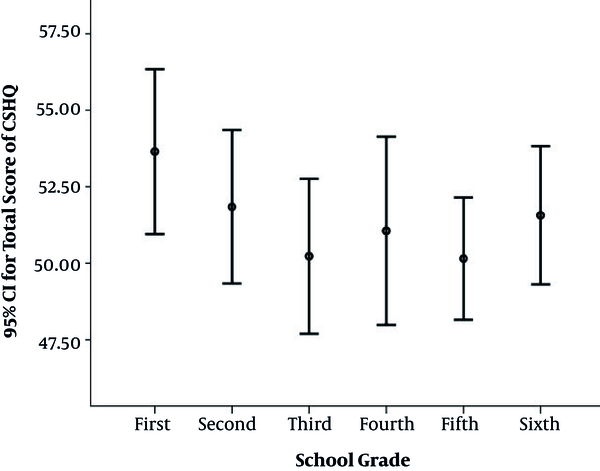 There is conflict about inter-gender differences in the sleep onset delay and total score. Some studies showed that there is no difference in this regard between two genders (8, 15); however, other studies indicated that the prevalence of sleep onset delay disorder is higher in girls than in boys (8, 22), which is consistent with the findings of the current study. This finding could be because girls spend more time at home and therefore they are more prone to use television and computer sets (23). Studies have shown the effect of TV watching on the sleep onset delay and bedtime resistance (9).

There is contradicting evidence regarding the relationship between parents' education and sleep problems among children. Hammam et al. (9) did not observe any relationship between parent’s education and CSD and its subscales whereas Kahn et al. (24) showed that children with less literate parents suffer from a sleep disorder. In line with the findings of Kahn et al. (24) study, our study found that parents’ education was associated with a reduction in sleepwalking and parasomnias. It seems that parents’ education, on the one hand, is associated with improved socioeconomic status (23), and on the other hand, literate parents provide a calmer environment for the child because of better observation of health and psychological recommendations (25). It leads to the reduction of stress and anxiety in children and thus the children experience less sleepwalking and parasomnias.

Despite various research findings regarding the impact of demographic factors on daytime sleepiness and sleep duration (7, 9), the current study did not support these findings (8). Owens et al. (18) also reported that age and gender have no independent effects on daytime sleepiness, which is consistent with our findings. It seems that failure in finding factors affecting daytime sleepiness in the research samples may be due to the problem in the last sleep phase or limitation in the morning sleep in children (7, 9). Other studies have pointed out that a high prevalence of coexisting sleep problems in children may disturb their daytime sleep (8).

The current study showed that there is an inter-correlation between subscales, which is consistent with other studies (7, 8). It can be interpreted in the way that subscales cannot be considered separately, and analyses such as structural equation model analysis should be used when studying them. Considering our wide literature search, we could not find any study in this regard.

The large sample size and using experienced individuals for training parents on completing the questionnaires are the strengths of this study. Since the current study utilized a cross-sectional design, the observed relationships cannot be considered as causality.

Overall, it can be concluded that the prevalence of CSD was much higher in our study than in other studies, which indicates the lack of awareness and treatment plan for coping with it. Given the impact of CSD on children’s behavioral disorders, it is recommended formulating plans for increasing the awareness in communities, especially among parents. On the other hand, coping with CSD requires understanding the etiology. Thus, when investigating the etiology of CSD, social, economic, and biologic factors should be considered besides demographic factors.

This manuscript was part of a thesis entitled: “Evaluation of Children Sleep Habits and sleep patterns in 7-12-year-old students in Qazvin" adopted by Qazvin University of Medical Sciences.

Copyright © 2018, Journal of Comprehensive Pediatrics. This is an open-access article distributed under the terms of the Creative Commons Attribution-NonCommercial 4.0 International License (http://creativecommons.org/licenses/by-nc/4.0/) which permits copy and redistribute the material just in noncommercial usages, provided the original work is properly cited
download pdf 1.35 MB Abstract XML Get Permission (article level) Import into EndNote Import into BibTex
Number of Comments: 0