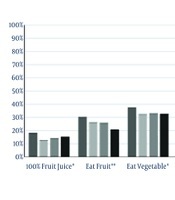 Smoking and alcohol consumption have been common among adolescents in recent years, both of which are risk factors of cardiovascular disease. They may be associated with unhealthy dietary habits that can add to cardiovascular risks in adults.

This study aimed to evaluate the association between smoking status, alcohol consumption, and dietary habits in adolescents.

In this study, 4,372 adolescents (2,223 males and 2,149 females) aged 13 to 18 years were enrolled from randomly selected schools in Northern Thailand. They were asked to complete the Thai Youth Risk Behavior Survey regarding smoking, alcohol use, and dietary habits.

The mean age of the participants was 15.4 (1.7) years and 15.0 (1.6) years in males and females, respectively. The prevalence of smokers and alcohol drinkers was 21% and 28.3%, respectively. Among alcohol drinkers, 52.4% were also smokers. Besides, 11% of the participants were current smokers. The proportions of adolescents with healthy dietary habits, defined as drinking 100% fruit juice, drinking milk, fruit/vegetable consumption, and having regular breakfast, were significantly higher in the non-smoking/non-drinking group (P ≤ 0.05 to P ≤ 0.001).

Adolescents who were smokers and alcohol drinkers were less likely to have healthy dietary habits. This can affect cardiovascular risks and associated diseases in the future. The proper advice for dietary and lifestyle modification among these high-risk groups may be needed from an early age.

Smoking and alcohol consumption are major health problems in adolescents in many countries. The use of tobacco and alcohol has been on the rise in adolescents worldwide. The youth risk behavior surveillance system (YRBSS) in the United States in 2015 indicated that during 30 days before the survey, 10.8% of high school students had smoked cigarettes and 32.8% had drunk alcohol (1). Among the youth, the short-term health consequences of smoking include respiratory effects and risk of other drug use (2). Individual, environmental, and family factors including family members currently smoking synergistically act to motivate adolescents toward smoking (3, 4). While alcohol consumption among adolescents has probably slightly declined over the past decade, the pattern of drinking too much and too early in adolescents has increased public concern (5). Worldwide, 38.3% of the populations aged 15 years or older have a history of alcohol consumption in the past 12 months (6).

Tobacco use and alcohol use are both strong predictors of cardiovascular risks leading to increased morbidity and mortality in adults. Cigarette smoking has an impact on hypertension, diabetes mellitus, dyslipidemia, and stroke in adults (2, 7, 8). Studies have shown that the early signs of these diseases can be found in adolescents who smoke (2, 9). In the same way, several studies have reported the association of alcohol consumption, even in moderate ranges, with cardiovascular diseases including hypertension and coronary artery disease (5, 10, 11). Unhealthy dietary behavior can also be associated with an overall unhealthy lifestyle, including time spent watching television (12), to contribute to overweight and obesity. Consequently, it has added to the risks of cardiovascular diseases. On the other hand, healthy dietary habits are promoted such as 100% fruit juice drinking, fruit/vegetable consumption, not consuming soft drinks and sports drinks, and having regular breakfast (13-15).

This study aimed to study the association between smoking status, alcohol consumption, and dietary habits among Northern Thai adolescents so that appropriate early preventive programs could be provided to this population.

A cross-sectional survey was conducted in secondary and vocational schools randomly chosen across Chiang Mai, a city in Northern Thailand. We invited 5,639 students to participate in this study. A self-reported web-based questionnaire was administered to students in grades 7 to 12 (aged 13 - 18 years). School teachers obtained parental consent verbally and provided information regarding the study to students after a regular computer class period. All students participating in this study were assured that their responses were anonymous and voluntary. The participants were also asked to indicate their consent on the first page of the web-based questionnaire. The study was approved by the Research Ethics Committee of the Faculty of Medicine of Chiang Mai University.

Smoking status and alcohol drinking were determined by the following questions:

“During your life, on how many days have you had at least one drink of alcohol?” Ever drinking was defined as alcohol drinking on any occasion in life.

Dietary habits were determined by the following questions:

Data were collected to evaluate the association between smoking status, alcohol consumption, and dietary habits in adolescents. The SPSS version 22.0 program (IBM Corp., Armonk, NY) was used to perform statistical analyses. The percentages, means, and standard deviations were calculated. Differences between study groups were analyzed using the chi-square test for qualitative parameters. A P value of less than 0.05 was considered statistically significant.

In total, 2,223 male and 2,149 female students participated in this study, providing a response rate of 77%. The prevalence of smokers and alcohol drinkers was 21% and 28.3%, respectively. Among alcohol drinkers, 52.4% were also smokers. Moreover, 11.1% of the participants reported that they were current smokers whereas 18.6% reported current alcohol drinking. The characteristics of the study population are shown in Table 1.

Table 2. The Proportions of Dietary Habits According to Smoking and Alcohol Drinking Status

In this study, the prevalence of smokers and alcohol drinkers was 21% and 28.3% among Northern Thai adolescents, respectively, that is consistent with the prevalence of cigarette smoking (22.3%) and alcohol use (27.9%) reported by the 2013 survey in Thailand (19). In the same way, the prevalence of high school students with current use of tobacco product (20.2%) did not significantly change in the US during 2011 - 2016 (20). In this study, 11% of the participants reported current smoking. Smoking was three times more common in males than in females whereas a previous report showed that smoking was 10 times higher in males than in females (21). This finding indicates more recent female smokers. Among Southeast Asian countries, the age of first smoking of a whole cigarette was 14.6-years-old in Thailand whereas it was 13.9-years-old in Malaysia (22).

Most alcohol drinkers had their first-time drinking at the age of 13 - 14 years, which was near the age of first smoking (23). Males are the gender at risk of health problems due to more episodes and more consumption of alcohol than females. However, similar to smoking, alcohol consumption among females reported by the National Statistical Office in Thailand gradually increased from 8.8% in 2007 to 11.8% in 2013 (24). Alcohol consumption was associated with recognized risks for non-communicable diseases. After adjustment for variables, the odds ratios of outcomes (high cholesterol, hypertension, and liver disease) were significantly greater among both occasional heavy drinkers (OR = 1.2 - 1.5) and regular heavy drinkers (OR = 1.5 - 2.0) compared to non-drinkers (25).

Concurrent use of tobacco and alcohol was 14.8% in this study. The prevalence of alcohol and cigarettes use was found to be 19% - 22% elsewhere (26). Smoking adolescents were reported to be three times more likely than nonsmokers to use alcohol (2). Based on previous studies, smoking and alcohol consumption are the most significant health risks at any age. Mortality from cardiovascular diseases due to coronary heart disease, hypertension, and diabetes is the most well-known consequence of tobacco and alcohol use (27-29). This mortality plays an important role in overall mortality of Thai population (38%-smoking, 16%-hypertension, and 10%-diabetes) in a previous study (29). Accordingly, smoking and alcohol use may be considered to affect both vasculature and cardiovascular risks.

Previous studies indicated that adolescents usually were less likely to engage in healthy behaviors. In the 2015 YRBSS, the findings indicated that 5.2% of high school students had not eaten fruit or drunk 100% fruit juice and 6.7% had not eaten vegetables during the seven days before the survey (1). Similarly, 46% and 60% of the adolescents did not eat fruit and vegetables daily, respectively (30). The international data collected in five Southeast Asian countries showed that 76.3% of the youth aged 13 to 15 years had inadequate fruits and vegetables consumptions (fewer than five servings per day) (31). The lack of protective factors and being physically inactive were associated with inadequate fruit/vegetable consumption and sedentary behavior (31). Unhealthy dietary habits are associated with overweight and obesity and consequently, they add to the risks of cardiovascular disease.

This study showed that the proportion of adolescents with healthy dietary habits was significantly higher in the non-smoking/non-drinking group. Our findings are in line with other studies that evaluated smoking frequency and unhealthy lifestyles and reported the association of smoking frequency with having skipped meals and less healthy food. The smoking frequency was also directly related to the frequency of fast-food and soft drink consumption (16). Adolescents who smoked were less likely to consume fruits, vegetables, and milk/dairy products and they ate significantly more fast-food than non-smokers (32-34). Daily smokers reported more consumption of food rich in sugar and fat than non-smoking adolescents (35). Adolescents who skipped breakfast were found to smoke more than breakfast consumers (14). Furthermore, another study added to previous findings that heavy smokers were significantly less likely to follow healthy dietary restrictions than non-smokers (36). In the same way, adolescents who drank alcohol were found to be less likely to consume healthy food than non-alcohol users (32), which is consistent with the current study. The findings of this study are attributed to the fact that smokers and alcohol drinkers are less likely to consider lifestyle and health consequences. A study in adults showed that eating behavior was associated with BMI, besides current smoking, ex-smoking status, and alcohol consumption (37).

For limitations, our sample included randomly selected schools with more than 1,000 students indirectly implying a relative socioeconomically advantage especially regarding food habits, so that the results may not represent all Thai adolescents.. Furthermore, the results apply only to the youth who attend schools and are not representative of all adolescents in this age group. Finally, we might not be definitely assuring that non-smokers/non-drinkers were associated with healthy dietary habits. A longer study with more depth would provide more information.

This study showed many adolescents in Northern Thailand with recent cigarette and alcohol use. Cardiovascular diseases seem to be growing at the early young age associated with smoking, alcohol drinking, and having less healthy lifestyles. Adolescents who were smokers and alcohol drinkers were less likely to have healthy dietary habits. This may affect cardiovascular risks and their sequential diseases in the future. Health-risks surveillance should be monitored for adolescent health. The proper advice for healthy dietary habits and lifestyle modification in these high-risk groups is needed from an early age.