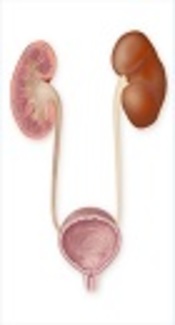 Primary nocturnal enuresis is the most common type of enuresis and has profound detrimental effects on quality-of-life and sleep patterns, and increased morbidity. The purpose of this study was to determine the frequency of urinary tract abnormalities found in ultrasound of children with monosymptomatic primary nocturnal enuresis (MPNE) and to compare with ultrasound findings of children without MPNE to determine whether performing ultrasound in these children is necessary.

One hundred and two children aged three to 13 years with MPNE at Golestan Hospital affiliated to the Military University of Medical Sciences of Tehran, Iran from 2016 to 2017, were enrolled in this case-control study. The control group included 59 children with no history of voiding dysfunction, who had abdominal ultrasoud for other than urinary system-related causes. The ultrasound findings were compared between the MPNE and control group.

Urinary tract abnormality, detected by ultrasound, was found in 15 children (14.7%) in the MPNE group and one child (1.69%) of the control group, with a statistically significant difference (P < 0.05). Findings of the nocturnal enuresis group were mild unilateral or bilateral kidney fullness in three children (20%), kidney simple cysts in one child (6.66%), hydrocele in three children (20 %), increased thickness or irregularity in the bladder wall of eight children (53.33%), and increased bladder wall thickness in one child of the control group.

Urinary abnormalities discovered by ultrasonography in MPNE were not clinically significant and did not require any other diagnostic tests. It may only be of concern to parents and cause unnecessary diagnostic procedures by the physician. This study showed that ultrasound should be done for patients with resistant or inappropriate clinical response during treatments.

Urinary incontinence is the inability to maintain urine in the age, at which the child should naturally have the ability to control his urine. Primary incontinence is when the baby has never had any control over the urine, and if incontinence occurs after a long (three to six months) period of control over urine, the condition is called secondary incontinence. Urinary incontinence up to the age of five years is physiologic, however, the majority of children obtain urinary control up to three years of age and they do not require urological evaluation if they are not accompanied by other urinary tract symptoms (1). Twenty percent of children over the age of four years have enuresis and each year, 15% of these children obtain urinary control, so that at age of eighteen years, only 1% of children have enuresis (2). In almost 75% of these children, one of their parents had a history of nocturnal enuresis. If the father had a history of nocturnal enuresis, the risk for children is seven times higher and also the incidence rate in twins is higher. Although genetic factors are one of the most important factors in nocturnal enuresis, it is important to treat anxiety and other psychosocial factors in families (2). Primary nocturnal enuresis is the most common type and severe nocturia enuresis is characterized by more than three wet nights, weekly (3). This is caused by a range of urological and non-urological diseases (4). The bladder parameters measured by ultrasound were consistent with ultrasound findings, bladder function changes and treatment outcome in children with primary nocturnal enuresis (3). Cayans et al. showed that obtaining a complete history of the voiding dysfunction is enough and urinalysis, and uroflowmetry in the assessment of monosymptomatic primary nocturnal enuresis (MPNE) is not usually necessary (5). Yeung et al. discussed the importance of ultrasound in the diagnosis and management of these children. They believed that ultrasound could differentiate between treatment subtypes and provide guidance in evaluating primary nocturnal enuresis and reducing the use of invasive urodynamic studies (6).

Furthermore, Steffens and Steffens in a study on 672 children at Antonius Hospital, described ultrasound as one of the ways of diagnosis in these patients, and finally divided the causes of enuresis to three main groups, including 46.4% with micturational problems, 33.2% with pathologic anatomic changes, and 20.4% with psychological diseases (7). In a study conducted in Belgium on the basis of a urology service on 150 Belgian children, an ultrasound was used to determine appropriate treatment (8). Another study conducted in Italy on 248 patients with urinary tract disorder was based on a non-invasive approach to the diagnosis and treatment of children with urinary incontinence and used ultrasound as a non-invasive method (9).

The evaluation of kidney volume by ultrasonography may be helpful for physicians to evaluate growth and changes in kidney size (10). Ultrasound can also be used in the diagnosis of bladder dysfunction and incomplete bladder emptying (11, 12). An ultrasound Doppler technique had diagnostic safety and is noninvasive in childhood and ultrasound is also recommended for the evaluation of the intraurethral urinary flow (13). It is also possible to use ultrasound in the diagnosis of spina bifida occulta (SBO) in children with enuresis. The sign of "single and double echogeneous cap signs and the V-shaped tip of spine" in the L5 and S1 can be useful in detecting SBO (14).

The purpose of this study was to determine the frequency of urinary tract abnormalities found in ultrasound of children with monosymptomatic primary nocturnal enuresis (MPNE) and to compare with ultrasound findings of children without MPNE. These findings will be used to evaluate whether or not performing ultrasound in these children is necessary.

One hundred and two children aged 3 to 13 years with MPNE at Golestan Hospital affiliated to Military University of Medical Sciences of Tehran, Iran from 2016 to 2017, were enrolled in the case-control study. The control group included fifty-nine children with no history of voiding dysfunction, who had abdominal ultrasoud for other than urinary system-related causes. The sampling method was simple random sampling and the sample size was calculated using the Altman nomogram method. Age and gender were mathched in two groups. Patients with neurologic deficit and known urological anomalies, such as vesicoureteral reflux, neurogenic bladder, non-monosymptomatic nocturnal enuresis, diabetes or any infection, were excluded from the study. A questionnaire, including demographic characteristics, and family and patient history was completed. Urinary tract ultrasound was performed for all cases and Ultrasound findings were compared between MPNE and control group.

Analyses of data was done by the SPSS statistical software version 24. For qualitative variables, frequency and frequency percentage and for quantitative variables mean and standard deviations were calculated. The results were analyzed with paired t-test and P value < 0.05 was considered significant.

a The patients of two groups were matched by age and sex. No significant difference is observed between the two groups (P = 0.73).

b Values are expressed as mean ± SD.

a There is a significant difference between the abnormal finding of urinary tract detected by ultrasonography in both groups (P < 0.05). However, these findings were not clinically significant and did not require any other diagnostic tests.

Ultrasonography is a non-invasive method for the evaluation of children with nocturnal enuresis. In the current study, the findings of abnormalities by ultrasound were relatively low in children with MPNE and did not require any intervention, because the majority of these findings were not clinically significant. These insignificant findings could lead to additional unnecessary evaluation and examination, and it could also be a concern for parents. A complete history of voiding may be enough to evaluate these children. The significant role of ultrasound is seen in patients, who have not responded to treatment (15).

Naseri reported different results in their study, in which lower urinary tract abnormalities, especially vesicoureteral reflux, were more frequent in children with physiologic enuresis than the normal population (1). He compared non-monosymptomatic nocturnal enuresis (NMNE) children with physiologic urinary incontinence and all children with urinary infection underwent voiding cystourethrography. However, in the current study, the researchers evaluated urological abnormalities in children with MPNE and the ultrasound findings in this group compared with ultrasound findings of the control group without enuresis and any urinary tract symptoms. Sreedhar et al. showed that ultrasound evaluation results are important and may be helpful in guiding clinical management (3). Cayan et al. believed that ultrasonography findings of the urinary tract are similar in children with and without nocturnal enuresis. In this study urinary tract abnormalities were seen in three children (2.83%) in the nocturnal enuresis group and one child (1.75%) of the control group, and the difference was not statistically significant (5), yet in the current study, upper tract anomalies were seen in 15 children (14.7%) of the MPNE group and one child (1.69%) of the control group, with the difference being statistically significant (P < 0.05), although the majority of these finding were not clinically significant in both groups.

Tafuro et al. compared ultrasonography findings in non-monosymptomatic primary nocturnal enuresis with healthy children. They believed that an ultrasonography study should be used in evaluation and diagnosis of these children and it was preferred over the most often harmful urodynamic study (17).

According to findings of the present research, urinary abnormalities discovered by ultrasonography in mono symptomatic nocturnal enuresis are more than the control group. It could also be suggested that these findings are not clinically significant and do not require any other diagnostic tests. It may only be of concern to parents and cause unnecessary diagnostic procedures by the physician. This study showed that ultrasound is not necessary in monosymptomatic primary nocturnal enuresis and should be done in patients with resistant or inappropriate clinical response during treatments.

The authors thank the faculty and members of Pediatric and Radiology Department of Golestan Hospital and all those, who helped complete this project.

Copyright © 2018, Journal of Comprehensive Pediatrics. This is an open-access article distributed under the terms of the Creative Commons Attribution-NonCommercial 4.0 International License (http://creativecommons.org/licenses/by-nc/4.0/) which permits copy and redistribute the material just in noncommercial usages, provided the original work is properly cited.
download pdf 102.88 KB Abstract XML Get Permission (article level) Import into EndNote Import into BibTex
Number of Comments: 0