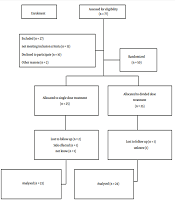 Breath-holding spells (BHS) are common in infancy and childhood. The severe episodes are frightening events for the families. The aim of this study was to evaluate therapeutic effects of piracetam in single daily dose and twice-daily dose of 40 mg/kg/day for treatment of severe spells.

In this prospective clinical trial, 50 children with severe BHS referred to our outpatient university clinics of pediatric neurology and were randomized to single-dose and divided-dose groups. The single-dose group received a single daily dose of 40 mg/kg/day piracetam in the morning, and the divided-dose group received 20 mg/kg/dose of piracetam twice daily. Patients were followed for four months. The number of severe attacks/month before and after treatments were recorded.

Our study showed that once-daily administration of piracetam could be more effective than twice-daily dose in the management of severe spells.

Breath-holding spells (BHS) are a common childhood affliction and based on what Carman and colleagues report (1), 4% to 5% of children experience this condition. Severe spells are frightening events for families, and many families perform cardiac massage, mouth-to-mouth resuscitation, and similar actions in response to them (2, 3). BHS usually occurs between the ages of six months and six years, and in more than 90% of cases, it begins before 18 months of age. It should also be noted that these spells can rarely occur in very young infants. Although the exact pathophysiological mechanism of BHS has not been determined, it appears that autonomic dysfunction is the main cause. Iron deficiency is common in patients with BHS, and in 20% to 30% of cases, there is a family history of the condition (4-6). A BHS occurs when a child begins to cry following a painful blow or when his/her toys have been taken away, or a similar event. After beginning to cry, the child will hold his/her breath after a deep exhalation of air and following this deep exhalation, respiration does not occur, and the child rapidly becomes cyanotic. Cyanosis occurs so quickly that it is not thought to be caused by apnea. The child then becomes weak, and loss of consciousness occurs. In the event of prolonged apnea, the child may experience tonic stiffening of muscles or clonic movements. The spells are usually short-term, and after less than a minute, consciousness is regained. Rarely, these anoxic spells last longer and are accompanied by a long postictal phase. Spells with a similar symptom sequence may be repeated several times a day (7). The prognosis of BHS is excellent, and it usually passes by four years of age. In some cases, it may last to eight years of age. It is also important to mention that a significant percentage of children with BHS are diagnosed with iron deficiency or anemia. Several studies have demonstrated that iron therapy is effective in reducing spells (2, 4). There is no specific paraclinical examination to diagnose BHS. Checking for iron deficiency and electroencephalography may also be necessary in some cases. The typical signs and recurring symptoms usually help with the diagnosis of the condition. Although BHS has an excellent prognosis, severe spells are very scary for most families even after a complete medical explanation about the non-risky nature of the spells (8). Overall, most authors firmly believed that common BHS requires no medical treatments and parental reassurance that these attacks will not harm the child is sufficient (3, 7). Therapies ranging from Chinese herbal medicine to iron supplementation and anticonvulsants have been tried with some success (9), however, accumulating lines of evidence suggest piracetam to be effective in reducing BHS (10). Piracetam, a nootropic drug that is derived from gamma-aminobutyric acid (GABA), has gained the interests of neurologists in treating CNS disorders including cognition/memory, epilepsy or seizure, stroke or ischemia, neurodegenerative diseases, and anxiety and stress (11). Although there are still question marks on piracetam’s mode of action, some theories suggest that piracetam’s actions are mediated through subtypes of glutamate receptors and also by effect on the ion channels to induce a non-specific neuronal excitability (11, 12).

This study is, to the best of our knowledge, the first time to compare the administration of single versus divided doses of piracetam. The current study was designed to address to these issues.

In this double-blinded, randomized, controlled clinical trial that was registered in the Iranian Registry of Clinical Trial (No.: IRCT2016060612782N11), 77 patients with BHS were referred to Isfahan pediatric neurological clinics in 2016, therefore, we selected 50 patients who were diagnosed with severe BHS based on their histories and were entered into the study, according to inclusion and exclusion criteria. Severe BHS was defined as occurrence of cyanosis, apnea, loss of consciousness and muscle contractions following crying or painful blows during wakefulness. In addition, the physical examination, blood samples (CBC, FBC, Ca, Mg, Liver function tests and renal functions tests), electrocardiogram (ECG), and EEG were performed for all patients. The inclusion criteria included the pediatrics patient aged between six months to three years, experiencing BHS spells more than twice a week, and severe spells that lead to loss of consciousness. Patients with a history of seizures or abnormality in EEG, heart disease or prolonged QT interval in ECG and anemia (hemoglobin < 10.5) did not meet the inclusion criteria. Patients who have severe adverse effects, did not follow up, or did not have informed consent were excluded from study. In the onset of the study, demographic information of patients such as age (months), gender, age of onset symptoms (months), convulsion symptom, and family history of BHS were recorded in the checklist. Patients were randomly allocated into two parallel groups as single-dose or divided-dose groups. The randomization was performed with OxMAR software with concealment methods. Piracetam was administered with our expert pediatric neurologists (blinded of group types) for the single-dose group as single daily dose of 40 mg/kg in the morning and divided-dose group as two daily 20 mg/kg/doses in the morning and evening (every 12 hours) until four months. In addition, patients were blinded about the study and after being followed up, two patients of the single-dose group and one patients of divided-dose group were excluded from study (Figure 1). Figure 1. Diagram of the flow of patients through every stage of the study

The data were analyzed with SPSS software version 24. Chi-square, and Independent t-test were performed to compare both groups. Also, ANOVA was used to compare improvement with other variables, number (percent), and mean ± SD shown, and P value < 0.05 was considered a significant threshold.

In the single-dose group, 12 patients (48%) were females and 13 (52%) were males with a mean age of 20.44 ± 8.13 months. The divided-dose group included 14 females and 11 males with mean age of 23.68 ± 9.85 months. There was no significant difference between groups based on gender and age (P = 0.77 and P = 0.21, respectively). A total of 28% of patients have a family history of BHS and 52% of them have convulsion symptom. In addition, chi-Square test showed that there were no significant difference between groups regard to family history of BHS and convulsion symptom (P value were 0.37 and 0.19, respectively) (Table 1). After treatment, 23 and 24 children followed up in single and divided dose groups, respectively and investigation of recovery and medical complications in the groups indicated that overall 22 cases (46.8%) gained complete recovery, 20 (42.6%) gained relative recovery, and five (10.6%) gained no recovery from the total of 47 children. In the single-dose group, 14 cases (60.9%) showed complete recovery and nine (39.1%) showed relative recovery. In the divided-dose group, eight (33.3%) showed complete recovery, 11 (45.8%) showed relative recovery, and five (20.8%) showed no recovery. This difference was statistically significant at P = 0.03. These results indicate that piracetam is more effective when administered in a single-dose over a divided-dose. Investigation of the medical complications found that 83% of children experienced no complications. Of the complications reported, restlessness was reported in four cases (16.7%) and skin irritation was in one case (4.3%) in the divided-dose group. In the single-dose group, restlessness with agitation was reported in one case (4.3%), skin irritation in one case (4.3%), and vomiting in one case (4.3%). There was no significant difference between groups for medical complications (P = 0.42) (Table 2). In addition, ANOVA showed that there were no significant difference between improvement with age and age of onset (P value were 0.98 and 0.65, respectively).

Five hundred years ago, for the first time, BHS was described with an English physician (13). The age of the BHS is in many studies considered in the first 12 months of life, although, BHS can occur at any time after birth including neonates, however it is difficult to confirm neonates until longer observation is employed (14). In the present study, we indicated that piracetam is an effective drug in treating severe BHS and more effective when administered in a single-dose over a divided-dose. Although published data in use of piracetam in BHS children is incomplete, in the study it was found that piracetam has more of an effect than the placebo does in controlling the spells (92.3% vs. 29.7%) (15). Garg (8) showed that two months of piracetam therapy significantly significantly the spells and concluded that this drug is effective and safe, however, till this day, no study has compared routes of administration. The present study found a significant decrease in BHS after administration of piracetam in both groups (daily single-dose and divided-dose), however, the decrease in severity and frequency of spells was more significant in patients treated with a single-dose. This effect may be due to the increase in drug blood level of the single-dose group in daytime, when most spells occur. The decrease in the severity and frequency of attacks per month was more significant in the second and third months after initiation of treatment. These findings were in line with the study performed by Aazam et al. (7), which concluded that the efficacy of piracetam was similar in most (90%) and it was related to the dosage of drug (50 - 100 mg/kg/day), however, these authors did not use the control group for comparison. In similar results that were obtained by Donma (16), it was found that the spells were improved in 92.3% treated with piracetam and 29.7% of the placebo.