A Comparative Study on Ascetic Fluid Biochemical Markers in Cirrhotic Children with and Without Spontaneous Bacterial Peritonitis: A Cross-Sectional Observation 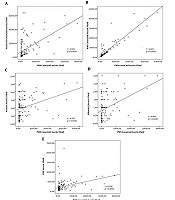 Here, we assessed the diagnostic validity of some inflammatory markers in children with SBP.

This cross-sectional study was performed in the Pediatric Gastroenterology Ward of Namazi hospital of Shiraz. SBP was considered as ≥ 250 polymorphonuclear cell (PMN) /µL ascetic fluid (AF).

Out of 150 liver cirrhotic patients with ascites, 41 (27.3%) were diagnosed with SBP. Mean WBC count and PMN per µL of AF were significantly higher in SBP patients than non-SBP (P < 0.0001). The highest specificity for the diagnosis of SBP was recorded for AF smear test (100%). Positive AF smear and culture tests rendered the highest positive predictive values (PPV, 100% and 88.2% respectively). The highest negative predictive value (NPV) was related to AF leukocyte esterase test (94.2%). The highest area under the curve (AUC) for diagnosis of SBP belonged to WBC count (0.956), total cell count (0.817), and LDH concentration (0.814) of AF. A cut off value of 290 WBC per µL AF resulted in respective 95.1% and 88.1% sensitivity and specificity. Trespass of WBC count and lactate dehydrogenase (LDH) level of AF higher than cutoff values (290 cells/µL, and 175 (u/L), respectively) resulted in 82.9%, 92.7%, 81%, and 93.5% sensitivity, specificity, PPV and NPV, respectively.

Total cell and WBC counts of AF strongly correlated with ascetic PMN count. Ascetic LDH, alone or in combination with WBC count of AF can be used as a potential surrogate for PMN counts in diagnosis of SBP.

Spontaneous bacterial peritonitis (SBP) is an infectious condition complicating the clinical course of patients with cirrhotic ascites. Ascites represents one of the most common complications of liver cirrhosis, and SBP has been reported in 10% - 30% of patients with cirrhotic ascites (1). SBP is defined as polymorph nuclear (PMN) count ≥ 250/µL ascetic fluid regardless of ascetic fluid (AF) culture results (2). Nevertheless, although PMN count is an accurate diagnostic test, this is concerned with individuals born errors that can affect the results. Furthermore, there is a possibility for lysis and missing PMN in AF while handling the specimens leading to pseudo negative results.

Although paracentesis and direct analyzing of AF dedicates the most accurate approach for diagnosis of SBP, recruiting non-invasive approaches is more beneficial for accurate diagnosis and management of SBP. Due to the asymptomatic nature, diagnosis of SBP is a challenge for clinicians. Recruiting sensitive and specific, as well as widely available diagnostic items can have diagnostic and prognostic value in SBP. On the other hand, a persistent inflammatory response in SBP renders inflammatory markers as potential diagnostic parameters.

In the present study, we evaluated the role of some common laboratory tests, including inflammatory markers, in the diagnosis of SBP in cirrhotic children presented with ascites.

The present cross-sectional study was performed during October 2015-November 2016 in pediatric gastroenterology ward of Namazi Hospital of Shiraz. Ethical consideration was according to the Helsinki Declaration. Informed consent was obtained from all the patients or their parents.

The study included 150 children with liver cirrhosis ascites. All demographical information was obtained by interviews.

Patients were included if they were less than 19 years old and were presented with liver cirrhosis ascites.

Abdominal paracentesis was carried out in aseptic condition to obtain 20 ml of ascetic fluid. Ten (10) mL of samples was used for biochemical and cell count analysis, and the other 10 ml was recruited for LET. LET test was performed using urine strips (Combiscreen 11SL, Analyticon, Germany). The strips were immersed into the samples, and the results were read within 60 - 90 seconds. The diagnosis of SBP on the appropriate clinical picture was made by the presence of at least 250 PMN cells per µL of AF with or without positive culture test (3).

Data was entered into SPSS 19 software. Frequencies, mean, and standard deviation were used for presenting the data. Normality of data was checked by the Shapiro-Wilk test. Chi-square and independent sample student t-test were exploited to run the univariate analysis. Any correlation between variables were assessed by either Pearson (for quantitative variables) and spearman (for qualitative variables) coefficients. Scatter plots were depicted to demonstrate the correlations. ROC curve analysis was performed to assess optimum cut off values for different variables and estimate their sensitivity and specificity. P value < 0.05 was considered as statistically significant.

From a total of 150 ascetic cirrhotic patients, male represented 79 (52.7%). Overall, the mean age of the patients was 4.3 ± 4.8 years old (range of 2 months through 19 years old (Table 1). Based on the PMN count of AF, 41 patients (27.3%) were confirmed to have SBP. SBP patients showed significantly higher ratios of positive LET, and nitrite test of AF, while a higher number of non-SBP were tested positive for AF smear test.

Overall, 17 patients (15, 36.6% in SBP group, and 2, 1.8% in non-SBP group) showed positive results for ascetic fluid culture test (P < 0.0001). In the non-SBP group, one patient grew klebsiella and the other Enterococcus. In SBP patients, the most identified microorganism was E. coli (8, 53.3%) following by Acinetobacter, Enterococcus, and streptococcus pneumonia (each with 2 cases, 13.3%). In addition, one culture was grown with klebsiella among SBP patients. Blood culture was positive in 6 patients among non-SBP (two with E. coli, two with staphylococcus, one with enterobacteria, and one with methicillin-resistant Staphylococcus aureus, MRSA), and one patient in SBP (streptococcus pneumonia) patients.

Table 2. Mean and Standard Deviation Values of Selected Parameters in Ascetic Fluid and Serum of Liver Cirrhotic Patients Affected with SBP and Non-SBPa

The highest diagnostic sensitivity for SBP was related to a positive LET (85.4%). The highest specificity was recorded for AF smear test (100%). Positive AF smear and culture tests rendered the highest PPV (100% and 88.2%, respectively). The highest NPV was determined for LET (94.2%, Table 3). Figure 2. Correlation of polymorphonuclear cell count per mL of ascetic fluid with ESR (A), serum level of CRP (B), and WBC (C).

The highest area under curve (AUC) values for diagnosis of SBP belonged to WBC count (0.956), total cell count (0.817), and LDH concentration (0.814) of AF. Considering a cut off value of 290 WBC per µL of AF, 95.1% and 88.1% sensitivity and specificity were documented, respectively. Simultaneous elevation of WBC and LDH higher than cutoff values (290, and 175 respectively) in AF rendered 82.9%, 92.7%, 81%, and 93.5% sensitivity, specificity, PPV and NPV, respectively. Table 4 shows the results of ROC curve analysis for SBP diagnosis in liver cirrhotic patients. In addition, ROC curves for selected variables have been shown in Figure 3. Infections of AF can be categorized as SBP, culture-negative SBP (culture-negative neutrocytic ascites, CNNA), bacterascites, and sterile ascites. The first two are defined with more than 250 PMN count/µL of AF. The difference of these two entities is that AF shows a positive culture in SBP patients. On the other hand, bacterascites, and sterile ascites are characterized with PMN count/µL of AF less than 250, while the difference is lying in culture-negative results of sterile ascites (2, 4). In our study, 41/150 (27.3%) patients with ascites were confirmed to have SBP, while others identified with CNNA. In previous studies, the frequency of SBP among patients with ascetic fluid infection (AFI) has been reported as 25% - 51% (1, 5-7). The different reported ratios of SBP in AFI may be due to different diagnostic criteria recruited by these studies as some authors may consider culture-positive patients as SBP, while others define SBP merely based on PMN count of ascetic fluid, as we recruited in our study (6, 8).

From our 41 SBP patients, 15 (36.5%) showed a positive culture test. This was significantly higher than the ratio of culture-positive episodes in the non-SBP patients (2/109, 1.8%). The most common microorganism identified in the present study was E. coli (53.3%) following by Acinetobacter, Enterococcus, and streptococcus pneumonia (each with 13.3% occurrence). In the study of Abdel-Razik et al., 55.7% of SBP patients showed positive ascites cultures (3). In other studies, a ratio of 24% - 57% of ascetic fluid culture positivity has been noted (9, 10). Common bacteria isolated from SBP patients have been E. coli, Enterobacter, Enterococcus and Staphylococcus aureus, klebsiella, pseudomonas, and Streptococcus pneumoniae (1, 5, 9-13). The rate and strength of immune reactivity is an important factor in determining whether a patient will grow a positive culture or not (14). Positive culture results have shown to exert an adverse impact on survival and the antibacterial response of SBP patients (10, 11). Although a positive culture may not be considered in the diagnosis of SBP, performing the test is important to identify casual microorganisms for an effective antimicrobial treatment. Third generation cephalosporins are considered as the first-line antibiotic therapy in SBP patients (11). Antibiotic resistance has been a serious sequala in SBP patients and may be seen in as high as 78% of these patients (7). Multidrug-resistant (MDR) and extensively drug-resistant (XDR) strains have been described in 20% and 10% of SBP patients, respectively (12). This phenomenon further signifies the importance of identifying microbial causes of SBP.

We noticed that LDH, albumin, and protein levels in AF were significantly higher in SBP patients that non-SBP subjects. In accordance, these markers rendered AUC values of 0.814, 0.706, 0.703, respectively. At a threshold of 175, LDH resulted in 85.4% sensitivity and 74.3% specificity for SBP. PPV and NPV at this threshold were 55.6% and 93.1% respectively. Similar to this finding, LDH was also reported in higher levels in SBP patients compared to sterile cases. LDH also showed 80%, 88%, 66.7%, and 93.7% sensitivity, specificity, PPV, and NPV, respectively, which are close to our values (8). More studies are needed to further show diagnostic validity of biochemical indices such as albumin and LDH in the diagnosis of SBP.

Clinical significant of pro-inflammatory markers in SBP has been proposed. Among blood markers, we found that ESR and CRP were significantly different between SBP and non-SBP patients. Accordingly, patients with AF infections have had higher levels of CRP (13, 15-18). In addition to diagnostic benefits, CRP may also be applicable in predicting prognosis and mortality (19, 20), as well as antibiotic response rate in SBP patients (3, 21). Pro-inflammatory markers; TNF-α, IL-6, and calprotectin have been correlated with SBP clinical course (2). Furthermore, TNF-α, and IL-6 have been correlated with ascetic PMN count in SBP patients (2). In line with these, significant correlations were found between CRP (r = 0.256) and ESR (r = 0.296) with PMN count of AF in our study. Regarding this, both CRP and ESR may be useful in diagnosis and management of SBP.

In conclusion, total cell and WBC counts of AF strongly correlated with ascetic PMN count. LDH, albumin and protein levels in AF were significantly higher in SBP patients that non-SBP subjects. Ascetic LDH, alone or in combination with WBC count of AF can be used as a potential surrogate for PMN counts in diagnosis of SBP. In addition, CRP and ESR may be useful in the diagnosis and management of SBP. For the application of nitrite test in the diagnosis of SBP, a more reliable procedure rendering higher reproducible sensitivities and specificities should be developed.