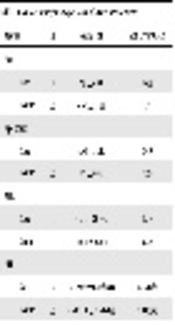 The Frequency of Thromboembolic Complications in Pediatric Nephrotic Syndrome

Nephrotic syndrome (NS) is a common renal disease in the pediatric population, which can be complicated with venous thromboembolic events.

In the present study, the researchers evaluated the risk factors of venous thrombotic events in children with nephrotic syndrome.

In this descriptive cross sectional study, the researchers evaluated 43 cases of NS including 35 uncomplicated and eight complicated patients with venous thrombotic events, who were admitted to the nephrology ward of Ali-Asghar Children Hospital from 2011 to 2015. Two groups were matched for age onset of NS. Data were recorded on age, gender, body mass index (BMI), histopathologic varieties of NS, and serum albumin level.

Nephrotic syndrome (NS) is a disease defined as massive proteinuria, edema, hypoalbuminemia, and hyperlipidemia. It is associated with hypercoagulability and venous thromboembolic events (VTEs). Thromboembolic events are important complications of NS, including pulmonary emboli (PE), deep vein thrombosis (DVT) and renal venous thrombosis (RVT). The different parameters are known as risk factors for VTEs. In the adult population, VTEs occur more frequently in NS with membranous nephropathy, in the first six months of disease presentation, in cases with low serum albumin level, antithrombin activity deficiency, and high level of ionized calcium. Most studies regarding thromboembolic events in NS patients are done on the adult population and there are a few studies on children (1-6).

This study aimed at determining demographic, histopathologic, and laboratory findings in children with NS complicated by VTE.

This was a descriptive cross sectional study including eight cases of idiopathic nephrotic syndrome admitted to the nephrology ward of Ali-Asghar Children’s Hospital of Tehran, Iran from 2011 to 2015. They had VTE as an NS complication. Diagnosis of idiopathic NS was done by the center nephrologist due to clinical manifestation of edema, hypercholesterolemia, hypoalbuminemia, and proteinuria more than 50 mg/kg per day. The secondary NS and also the congenital NS cases were excluded. These cases were admitted because of the first presentation of NS or due to its relapse. Another group of 35 primary idiopathic NS patients without VTE were chosen as the control group. These two groups were matched according to the mean age of disease onset.

Collected data included age, gender, BMI, serum albumin level (SAL), histopathologic result, and the sort of VTE. All data were obtained from medical records and collected through inventories. Statistical analysis was performed using SPSS V. 18. The student t-test and Pearson correlation were employed for comparing variables. P values of less than 0.05 were considered as significant. The project was approved by the Ethics Committee of Iran University of Medical Sciences.

The histopathologic feature of focal segmental glomerulosclerosis (FSGS), membranoproliferative glomerulonephritis (MPGN) and minimal change disease (MCD) were distinguished in one, two, and three cases in the VTE group, respectively (two cases did not undergo renal biopsy), while in the control group, there were eight FSGS, five MCD, and no MPGN with a significant difference between these two groups (P = 0.01 and 0.01 for FSGS and MPGN, respectively). The mean serum albumin level in MPGN was lower than the other patients. Mean albumin level was 1.60 ± 0.56 g/dL in the MPGN patients yet in other pathologic varieties, the mean serum albumin level was more than 2 g/dL (P = 0.05).

Most studies about the frequency and risk factors of VTEs in nephrotic syndrome have been done on adult patients and the studies in pediatric age group are scarce. Study on pediatrics can make better insight on this group.

According to the results of this study, the mean age of patients’ complicated with venous thrombosis is about 3.2 years more than nephrotic patients without VTE. This shows that VTE in NS is not a frequent event at a very young age and by increase in age, the rate of these events will be more in nephrotic patients.

This study showed that there was a relationship between the mean serum level of albumin and the histopathologic varieties. As the results of this study found that the mean serum albumin level in MPGN is less than the other pathologic features, therefore there is greater risk for VTE. Previous studies showed that membranous nephritis (MN) is the most frequent variety that had a direct relationship with VTE (10). This discrepancy between the current study and previous studies could be due to the population of studies; the current population of nephrotic was children under 14 years old yet others were mostly on adult populations, therefore, it seems that more studies are needed on pediatric population.

Regarding the kind and site of VTE, some study results on the adult population with NS, especially with membranous nephropathy, have shown that renal vein thrombosis is the most frequent VTE, especially in the presence of severe hypoalbuminemia (9, 10) Zhang et al. showed that 35% of NS cases had PE or RVT. According to this study PE were more common than RVT. Furthermore, PE in 84% of cases was asymptomatic. According to this study, most PE cases were asymptomatic and older age is a risk factor (11). In Kayali et al.’s study, RVT is more common than PE in NS (12). Li et al. in a study on 100 cases of NS, reported that RVT is more common than PE. It seems that asymptomatic PE cases were the reason of this discrepancy (13).

According to the current study, RVT did not occur. According to Medjeral-Thomas et al.’s study incidence of VTE in MN is more than other forms of NS (14). This difference between previous and the present study might be due to the difference between the age of the population, as membranous nephropathy in adults are frequent but not in pediatrics.

The result of the current study showed that there is a close relationship between serum albumin level and VTE presentation in pediatric nephrotic syndrome. The researchers could suggest the use of anti-thrombotic agents as prophylaxis in nephrotic patients with serum albumin level less than 2 g/dL. However, the limitation of the current study was the number of patients with VTE. More studies in this field on a larger pediatric population are needed.

Copyright © 2019, Journal of Comprehensive Pediatrics. This is an open-access article distributed under the terms of the Creative Commons Attribution-NonCommercial 4.0 International License (http://creativecommons.org/licenses/by-nc/4.0/) which permits copy and redistribute the material just in noncommercial usages, provided the original work is properly cited.
download pdf 106.69 KB Get Permission (article level) Import into EndNote Import into BibTex
Number of Comments: 0