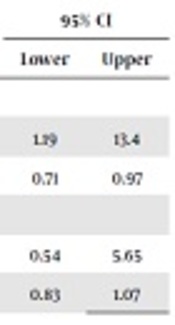 One hundred and twelve infants with birthweight (BW) under 2000 g or GA under 36 weeks that needed artificial ventilation after admission to the neonatal intensive care unit were randomly assigned into two groups. In the first group, neonates underwent synchronized intermittent mandatory ventilation (SIMV), pressure support ventilation (PSV), or SIMV + PSV with volume guarantee (VG); and in the second group, neonates received ventilation without VG mode. All of the survived infants had ophthalmologic examination at the proper age by a retinal subspecialist to find the different stages of ROP.

ROP incidence in preterm infants could be reduced using VG mode of ventilation, since it is a safer ventilation mode in neonates due to reduction in the mean duration of ventilation, peak FiO2 requirement, and PaCO2 fluctuation.

Retinopathy of prematurity (ROP) is defined as an arrest of retinal vascular development with neuronal abnormalities in the preterm infant (1). Several risk factors are associated with its occurrence and progression that are divided into fixed and modifiable ones. Gestational age (GA), low and very low birthweight (BW), and intrauterine exposure to adverse factors are the well identified risk factors at birth (1). Although being small for gestational age is a major risk factor, some studies just proved its impact on older infants (> 29 week of GA) (2, 3).

High oxygen saturations (SpO2) and fluctuations in oxygen concentrations due to different disease processes during the first few weeks of life may have a positive relationship with the incidence of ROP (9).

Since safe level of oxygen saturation differs with postmenstrual age and stage of ROP, no fixed SpO2 range is recommended so far (9). Lower SpO2 level in early days of life could roughly have a preventive effect on ROP; though it increased death rates in several studies (10). Although avoidance of alteration between hypoxia and hyperoxia seems to be one of the desirable methods to decrease ROP, the benefits should be balanced against the risk of mortality and other morbidities such as cerebral palsy (11, 12).

The effects of VG are recently studied with various aims including duration of ventilation, total need of oxygen supplementation, weaning from the ventilation (15), and neonatal morbidities and mortality (16); the latter one was more considerable. Guven et al., demonstrated lower incidence of bronchopulmonary dysplasia, intraventricular hemorrhage, and ROP in the subjects ventilated by VG mode compared to the ones received SIMV (10). However, to the best of authors’ knowledge, no study so far investigated the incidence of ROP after VG ventilation specifically by controlling confounding factors.

The current study was conducted in the neonatal intensive care unit (NICU) of HRH. The study was approved by the Ethics Committee of the Iran University of Medical Sciences. Its layout was randomized, controlled trial and the sample size was calculated 112.

Preterm infants under 2000 g or less than 36 weeks of GA admitted to NICU that needed ventilation in the first week of life were included in the present trial. The exclusion criteria were major anomalies that needed surgery, eye anomalies, and five-minute Apgar scores less than 5. Infants that died before discharge were excluded as well. After obtaining written consents from the parents, the subjects were randomly divided into two corresponding groups, each consisting of 56 infants. The subjects were allocated to the study groups by random number method. The study was performed from May 2013 to December 2015. It was a single-blind study as the nurses and physicians were informed about the ventilation mode. Neonates admitted to NICU after birth in this hospital or admitted from other hospitals in the first week of life with GA less than 36 weeks and respiratory distress were examined by the physician and included in the study if not showing the exclusion criteria. Neonates were intubated and ventilated according to the fixed protocols of NICU (i.e. showing apnea requiring mask and bag ventilation, requiring more than 50% fractional inspired oxygen (FiO2) with nasal continuous positive airway pressure applied at 6 cmH2O, and abnormal arterial blood gas); some of them were intubated after failure of nasal continuous positive airway pressure. Surfactant administration was similar in both groups based on NICU guidelines. In group I, the ventilation mode was SIMV, pressure support ventilation (PSV), or changing between these modes according to their ventilation needs with VG. The targeted volume in VG was 4 - 6 mL/kg. The group II received SIMV, PSV, or SIMV + PSV without VG. Other therapeutic procedures in the two groups were principally similar.

All infants were monitored with Spacelab patient monitors and their oxygen saturation (SaO2) was recorded every one hour and if they needed extra oxygen or resuscitation. FiO2 was recorded at the beginning of each shift and if it was changed more than 5% at the shift. Arterial pressure of carbon dioxide (PaCO2) was measured by arterial blood gases as ordered by the physician and at least once a day till they were ventilated. The required information was gathered on admission using questionnaires including several sections such as general information (gender, GA, BW, Apgar score at birth, place of birth), ventilation specifications (mode of ventilation, peak FiO2, and minimum FiO2), general outcomes (ventilation duration, maximum arterial pressure of oxygen (PaO2), minimum PaO2, maximum PaCO2, minimum PaCO2, pneumothorax, and death), and ROP (occurrence of ROP and severe ROP, which requires treatment) after ophthalmic examination in the NICU or ophthalmology clinic in HRH if they were discharged from hospital at the screening time.

To screen the neonates for ROP, indirect ophthalmoscopy was undertaken based on regular guidelines. Meeting at least one of these criteria was sufficient to be examined: GA < 36 weeks or BW < 2000 g and being ventilated mechanically. A retinal subspecialist with great experience in ROP screened the neonates during the study.

Peak FiO2 and minimum FiO2 results are summarized in Table 1.

Table 1. Comparison Between FiO2 Peak and FiO2 Minimum in the Two Modes of Ventilation

Pneumothorax, as the most important side effect of ventilation, and death, as the main indicator of outcome, were compared. The developing pneumothorax was more possible if the patient was not ventilated by controlled volumes. Nonetheless, there was no difference in the death rate among neonates ventilated differently (Table 3).

Table 3. Odds Ratio of the Two Modes of Ventilation for Pneumothorax and Death

Since many studies revealed contribution of blood gas fluctuations with ROP (5, 6), in the current study, there was more oscillation of such variables among those who developed ROP eventually (Table 4). PaCO2 and PaO2 fluctuations were less prominent in the VG group as compared to the ones received ventilation without VG and it contributed to ROP incidence (Table 4).

The current trial mainly aimed to compare probable preventive effect of SIMV + VG/PSV + VG on ROP incidence. The two variables here were the development of ROP and rate of severe ROP, which needed further ophthalmologic treatment. Since 14 infants did not refer for eye examination (six in the group I and eight in the group II), 91 infants were examined in several sessions by the same ophthalmologist. Overall, 11 infants showed different stages of ROP (12%) and there was a significant difference between the two groups (6% in infants ventilated with VG vs. 17% in the ones ventilated without VG, P = 0.01). Odds ratio (OR) for the development of ROP in patients received SIMV + VG/PSV + VG was 3.25 (95% CI: 1.13 - 9.36) whereas it was 0.83 in the corresponding group (95% CI: 0.71 - 0.97).

Table 5. OR of ROP and ROP Treatment After Two Ventilation Modes

Therefore, it could be concluded that SIMV + VG/PSV + VG in comparison with SIMV/PSV played a preventive role in the incidence of ROP and its higher stages.

Since many studies showed the effect of several fixed factors on the incidence of ROP (2, 3); the primary goal of the current study was to eliminate those factors between the two groups by randomization and show the main effect of oxygen fluctuation, high oxygen level, and PaCO2 on ROP.

Ventilating infants with less oxygen fluctuation in the delivered tidal volume could protect the immature lungs from hypo- or hyperventilation. The most significant advantage of VG is that in the face of rapidly changing lung compliance, the actual tidal volume delivered to the patient circuit remains constant. This theoretically avoids the situations of under distension and consequent alveolar hypoventilation, or over distension and lung injury. Cheema et al., reported lower peak inspiratory pressure and mean arterial pressure in the patients ventilated with VG (11). Reduced time of ventilation was concluded as an advantage of volume control (VC) versus time-cycled pressure-limited (TCPL) methods by Sinha (12), Singh (13) and Duman (14). These ventilation parameters have indirect effect on ROP.

Herein, both minimum FiO2 and peak FiO2 were lower in the VG group. Furthermore, total duration of mechanical ventilation and O2 dependency were lower in this group. A recent trial by Cheema et al., in a stratified analysis revealed that infants with GA > 25 weeks had significantly less hypocarbia when VG was used (11) and it was found that both hypo- and hypercarbia could be lessened with VG.

Although Guven et al., reported no difference in the air leak between VG and SIMV ventilation modes (10), however, pneumothorax was less frequent in VG mode of ventilation in other studies (7, 8, 21) and the impact of VG on the incidence of pneumothorax and mortality rate is still controversial. Herein, pneumothorax proved to be less likely in the VG group. A well-organized Cochrane review concluded lower mortality after receiving ventilation with VG (7), while Guven et al., found no significant decrease in death rate after volume-controlled ventilation (10). Nevertheless, no differences could be observed between the survival rates of the two groups.

The main goal of the current study was to find the impacts of ventilation type on ROP incidence and severity. Based on the current study, ROP incidence and severity were lessened by VG modes of ventilation as compared to other modes without VG. It was tried to lessen the confounding factors between the two groups. This contribution with ROP, as a well-known comorbidity of prematurity, was investigated by few studies before (7, 12). The strength of the current study was gathering sufficient sample size and dividing them into standard corresponding groups; therefore, the results were thought to be more reliable. OR of developing ROP was higher among the subjects ventilated without VG (OR = 3.25; 95%CI: 1.13 - 9.36), and those with higher stages of ROP (requiring treatment) (OR = 3; 95%CI: 0.63 - 14.23). The limitation of the study was that the invasive and non-invasive methods of ventilation were not compared, and there were 14 missing data (15%).

The authors would appreciate Dr. Sedeghat and Dr. Abri (ophthalmologists in Rasoul Akram Hospital) for their role in examining infants for ROP.