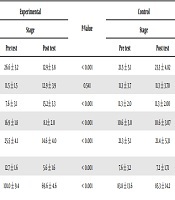 Interpersonal skills enable people to develop positive and effective relationships with each other.

This study aimed to investigate the effectiveness of training on interpersonal skills in female teenagers.

By an interventional study with pretest-posttest design, subjects were randomly divided into case and control groups. The target population consisted of all female teenagers in Ilam in 2016 - 2017. The 60 participants, included by multi-stage cluster sampling, were randomly assigned into two experimental (n = 30) and control groups (n = 30). The short 32-item version of inventory of interpersonal problems (IIP) was used to collection of data, which was completed by all subjects at the pre-test stage. The interventional group received eight sessions of the life skills training program, and two experimental and control groups received the post-test. Data were analyzed by two-variable variance of analysis via SPSS software version 20.

The training program can be effective for interpersonal skills.

Teenagehood is one of the most critical and sensitive stages of life for formal education. Teenagers are highly curious about different issues and have a preoccupied state of mind for life issues and concerns (1). During this period, they need to strike a balance between emotions, wisdom, self-perception, self-awareness, and selection of their goals (2). Interpersonal skills are the ones that engage individuals in interpersonal interactions and communication processes to share their thoughts and feelings through verbal and nonverbal exchanges (3).

As previously shown, interpersonal skills are essential in teenager students to adapt them to outdoor and social occasions (1). In this view, adaptation refers to the ability of individuals to adjust to the environment (4). In terms of education, adaptation is a set of learned behaviors when an individual has not learned the necessary skills to adapt to the problems in life (5). Previous studies suggested that the lack of adaptive communication skills can negatively can exacerbate learning difficulties and often lead to adjustment problems. When it comes to interpersonal skills, we simply think of simple behaviors in various social situations (6). It is acknowledged that the lack of interpersonal skills relate to short-term and long-term risks, including academic, psychological, and social relationship problems as well as low self-esteem, anxiety, and depression in the long run (7).

Some studies have found that the treatments of children with failure in adaptive interpersonal skills can improve other skills, including leaving the class in an orderly manner, taking turns, rejecting a request politely, helping others, greeting, accepting failures, and saying congratulations (8, 9).

Teenagers, especially female students, face several difficulties, so social interactions are quite essential for them because they have a greater tendency towards personal autonomy to widen the circles of their relationships with others (6). Interpersonal skill training can create healthy social interactions (10) in order for people to easily communicate with one another and develop a positive relationship with school staff and teachers (11).

The present study aimed to investigate the efficacy of interpersonal skill training on female teenagers.

In this interventional study, we used a pretest-posttest design with the control group. The statistical population consisted of all female students aged 15 - 18 in Ilam. A multi-stage cluster method sampling was utilized for the selection of samples. Thus, among all of the eligible schools, two schools were randomly selected, and finally, two classes were randomly chosen from all of the classes. Inclusion criteria were agreement to participate in the research project, age range from 15 to 18 years, studying in secondary school, and low score on inventory of interpersonal problems (IIP-32). The exclusion criteria were unwillingness to participate in the research project and any acute or chronic condition that would limit the ability of the subject to participate in the study. The pre-test was taken during school time, so the questionnaires were distributed among the students in the classroom and collected after the completion. One week after the pre-test, a female instructor, with a master’s degree in clinical psychology and sufficient experience in conducting life skills training courses, began teaching the experimental group at the school. The post-test was taken after one week of training. Then, we selected 60 students for whom we explain the aims of the study. Finally, we obtained their informed consent and divided them into two groups of 30.

IIP has 32 items with 5 point Likert scale, ranging from 0 (not at all) to 4 (extremely). The high score on this questionnaire indicates the high levels of interpersonal difficulty. Where the lower bound is score 0, the average Score 64; the upper score 128, accordingly; a score of 0 to 32 indicates low interpersonal problems; a score of 32 to 64 average interpersonal problems, and a score above 64 interpersonal problems high. The subscales of IIP include assertiveness and sociability, openness, caring, aggression, supportiveness, involvement, and dependency (12). In the present study, Cronbach’s alpha coefficient for these above-mentioned subscales has been calculated 0.83, 0.63, 0.60, 0.83, 0.71, 0.63, respectively and 0.82 for the total scores.

Adapted from the book on student’s social skills training (13), this program is based on the theory of social learning, role play, and use of art therapy techniques (music, storytelling, and creative performance). Each technique was performed on the experimental group of eight 90-minute sessions twice a week.

In the first step, both groups received a pretest by IIP32. Then, the interventional group received eight 90-minute training sessions per week. Post-test was performed on both groups after completing the training course.

After the data collection, the data was analyzed by SPSS software version 20. Descriptive methods were used to estimate frequency in groups. Two-way ANOVA was used for the comparison of frequencies. Also, Spearman’s and Friedman correlation coefficient tests were used for other correlations. In all analyses, P-value was considered lower than 0.05 (Table 1).

1) The processor and the time required were fully explained to the participants.

2) The participants signed the written consent to participate in the study.

4) Subjects were free to withdraw from the study at any time.

This article is the result of a Master’s thesis in Clinical Psychology from Islamic Azad University, Ilam Branch (the approval code of 63920701941008).

The informed consent was earned by participants before completing the questionnaire.

Table 2. Descriptive Statistics for Pre-Test and Post-Test in Both Groupsa

Table 3. Multivariate Analysis of Variance (MANOVA) on the Scores of the Studied Variables

Table 4 shows the analysis of variance with control of the pre-test scores. There is a statistically significant difference between the mean scores of assertiveness and sociability, caring, aggression, supportiveness, and involvement and dependence variables in both groups (P < 0.01). Therefore, training can improve assertiveness and sociability (59%), and caring (34%), involvement and supportiveness (35%), and decreased aggression and dependency (19%) among female high school students.

Moreover, the analysis of variance with control of pre-test scores showed the statistically- insignificant difference between the mean score of openness in both experimental and control groups (P < 0.01). Therefore, according to the results, training does not enhance openness among female high school students. Eta coefficient suggests that training improves openness (5%) among female high school students.

Table 4. The Effect of Training on Variables of Assertiveness and Sociability, Openness, Caring, Aggression, Supportiveness, Involvement, and Dependency in Female High School Students

The present study aimed to examine the effectiveness of training on adaptive interpersonal skills learning among female teenager students. Training can ameliorate the assertiveness and sociability, caring and supportiveness, involvement scores, decreased aggression, and dependency traits among female high school students. The first finding suggests that social skills training can enhance adaptive interpersonal skill learning. This finding is consistent with the results of the studies by Albertyn et al. (14), Bieber-Schut (15), and Fallahchai (16). Communication skill training can help students better identify their emotions and feelings with others, so they can receive greater social and emotional support from their environment (17).

Adaptability reflects a person’s willingness to interact constructively with others, especially friends and peers. Life skills training, especially interpersonal skills, helps students to understand a variety of psychological traits in themselves and others and accept them more transparently (5).

This process makes it clear that intimacy and companionship should be developed in spite of some of the key differences between them and others (4). Thus, various training programs should be facilitated to strengthen the adjustment level among students (19).

In this study, the analysis of IIP32 components suggested a significant difference between interventional and control groups in terms of “caring” and “adaptive interpersonal communication” before and after the intervention, which was in line with the results of other studies (6, 20, 21). This finding suggested that social skills training contributed to the high level of social adjustment among students and ultimately positively affected their academic performance (13).

One of the significant goals of education is to help students achieve adaptability and build a useful and effective relationship with others as well as accept their social responsibility. Thus, it was necessary to pay attention to the development of social skills training among students (22). Behpaxho et al. (6) reported that social skills training would help promote the children’s adaptation in different aspects of life and was regarded as the most basic preventive program. Social skills training helped students reflect on their personal characteristics and be able to identify their weaknesses, make an attempt to modify them, and rely on these positive aspects, and improve their thoughts and emotions towards others.

Also, we found that training assertiveness and sociability, aggression, supportiveness, and dependency traits were improved in female teenager’s students after intervention. This finding is consistent with the results of other studies (24, 26-29). Those skills helped the students experience more successful personal and interpersonal relationships because they have a reciprocal enhance the acceptance and a more friendly relationship, increase self-confidence, and ultimately maximize individual’ adaptability (30).

Social skill training is a technique through which people learn how to expand an appropriate and enjoyable relationship in a variety of situations (25). Most scholars agree that social skills can be learned because children raised in unsuitable environments have socially unconscionable behaviors and cannot speak effectively (31). The development of social skills is a part of the socialization process in individuals, and the training should be exclusively offered on the basis of this process (32). Training of emotional, social skills bring several benefits for individuals, including regulated emotions, stress control, emotional management, self-control, and interaction and subsequently lead to a decrease in non-social and aggressive behaviors and an improvement in interactions and desirable behaviors due to the person-environment interactions (33).

In summary, the results of this study indicated that life skill training could affect the interpersonal skills of teenager students. Thus, those students who received a life skill training had more effective and better performance in their interpersonal relationships. For example, those who find themselves incompetent, unattractive, and boring in interpersonal relationships may tend to avoid communication with others. However, those who think of themselves as attractive, amiable, and valuable show more interest to communicate with others and build a friendly relationship. Also, students with poor interpersonal skills are less likely to be accepted by their peers.

The limitations of this study are the small sample size and the existence of control variables. Also, factors such as economic status, single parenthood, parental education, and child rearing were undesirable variables that have undoubtedly influenced the results. Finally, the length of the measurement which causes fatigue could affect the results.

We would like to thank all the participants involved in the study, the Management, Research Assistant and Psychology Department at Ilam Islamic Azad University, Ilam Branch, and all those who helped us during this research.

Copyright © 2020, Journal of Comprehensive Pediatrics. This is an open-access article distributed under the terms of the Creative Commons Attribution-NonCommercial 4.0 International License (http://creativecommons.org/licenses/by-nc/4.0/) which permits copy and redistribute the material just in noncommercial usages, provided the original work is properly cited.
download pdf 118.71 KB Peer Review Comments ( 100.61 KB) Get Permission (article level) Import into EndNote Import into BibTex
Number of Comments: 0