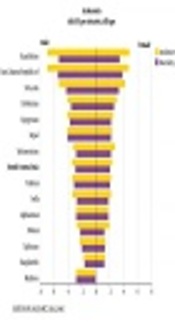 Epidemiology, Incidence, and Mortality of Leukemia in Children Early Infancy to 14 Years Old of Age in South-Central Asia: A Global Ecological Study

The cancer was considered the second cause of death from early infancy to 14 years of age after the inadvertent damage. Also, leukemia was reported as the most common type of cancer in infants.

The current study was aimed to evaluate the epidemiology, incidence, and mortality rates of leukemia from early infancy to 14 years of age in South-Central Asia.

This is a descriptive cross-sectional study. In the current study, the incidence and mortality rates of leukemia in South-Central Asia were determined. The data were extracted from a Cancer Global Project in 2012 available at http://globocan.iarc.fr/Default.aspx.

The cancer is considered the second cause of death around the world, especially in the developed countries after cardiovascular diseases (1, 2) and the third cause of death in less-developed countries after cardiovascular diseases and accidents (2). The rate of cancer was estimated at < 1% of the total cancers from early infancy to 14-year-old age group (6, 7).

The cancer was reported as one of the main causes of death among the infants (8, 9). It was considered the second cause of death from early infancy to 14 years of the age after the inadvertent damages with the mortality rate of 0.41 deaths per 10000 infants (10).

The most common types of cancer, based on the rate of incidence in infants, were reported as acute lymphoblastic leukemia, central nervous system tumors, and lymphoma, respectively constituting half of the total malignancies in infants (7, 11). Leukemia was defined as the malignant switch of hematopoietic precursor cells categorized into lymphoid and myeloid lineages based on the type of the cell, and acute or chronic condition of the disease (11, 12). The etiology of infantile leukemia still remained to be determined. The epidemiologic studies assessed the risk factors for leukemia, including environmental, genetic, and infectious factors (13, 14).

Leukemia in children can be generated by genetic factors such as Down syndrome, Fanconi anemia, Bloom syndrome, and Custman syndrome. Exposure to some medications such as alcohol and urea nitrogen and ionizing radiation can also cause this disorder (15).

Thirty-two percent of infantile cancers are related to leukemia (16). Furthermore, leukemia was indicated as the most common type of malignancy in under 15-year-old infants with the ratio of 40/1000000 people suggesting some 30% of the overall cancers in infants (17, 18).

The incidence rate of acute leukemia was estimated at less than 3% of the total cancers significantly remarked owing to a high rate of mortality (8). The mortality ratio for males and females were ranged from 1.3 to 6.3 and 1.1 to 3.8 per 100000 people, respectively. The low incidence and mortality rates resulted from the lack of disease diagnosis in South-Saharan Africa (3).

The treatment of these patients is done by two approaches. In the first approach, chemotherapy is used and in the second approach, after the initial chemotherapy, a stem cell transplant is used (15).

The data related to the incidence and mortality rates in different populations might provide important information about risk factors and possible changes.

Thus the current study was aimed to evaluate the epidemiology, incidence, and mortality rates of leukemia from early infancy to 14-year-old infants in South-Central Asia.

This is a descriptive cross-sectional study. In the current study, the incidence and mortality rates of leukemia in South-Central Asia were determined. The data were extracted from a Cancer Global Project in 2012 available at http://globocan.iarc.fr/Default.aspx.

The methods of estimation are country-specific and the quality of the estimation depends upon the quality and on the amount of the information available for each country. In theory, there are as many methods as countries and because of the variety and the complexity of these methods, an overall quality score is almost impossible to establish for the incidence and mortality estimation. However, an alphanumeric scoring system which independently describes the availability of the incidence and mortality data was established at the country level. The combined score is presented together with the estimates for each country to provide a broad indication of the robustness of the estimation. The methods to estimate the gender- and age-specific incidence rates of cancer for a specific country fall into one of the following broad categories according to priority order: (1) rates of the projects until 2012 (38 countries), (2) most recent rates applied to 2012 population (20 countries), (3) estimated at national mortality by modeling, using incidence mortality ratios derived from recorded data in country-specific cancer registries (13 countries), (4) estimated at national mortality estimates by modeling, using incidence mortality ratios derived from recorded data in local cancer registries in neighboring countries (9 European countries), (5) estimated at national mortality estimates using modeled survival (32 countries), (6) estimated at the calculated average of the local rates (16 countries), (7) one cancer registry covering part of a country was used as representative of the country profile (11 countries), (8) age/gender-specific rates for "all cancers" were partitioned using data on the relative frequency of different cancers (by age and gender) (12 countries), and (9) the rates of neighboring countries or registries in the same area (33 countries). Table 1. Incidence and Mortality of Leukemia in South-Central Asia by Country in All Group Ages

Table 2. Incidence and Mortality of Leukemia in South-Central Asia by Country in 0 - 14 Years Old

Prominent progress was obtained in treating infantile cancers during the last decades, however, leukemia was reported as one of the most important factors in infantile mortality (22). Massive therapeutic costs, hospitalization length, and psychological problems indicated the heavy burden of the socio-economic situation of leukemia. Approximately, 10.4 million dollars are paid so as to treat acute leukemia in infants in the United States annually (23).

Only 10% of the cases of childhood cancers have been clinically and epidemiologically distinguished and no specific etiology has been identified in 90% of the cases. It seems that childhood leukemia, as well as other cancers, are multifactorial disorders in which environmental and genetic factors play important roles (13).

About 59014 new cases of leukemia with a mortality rate of 37010 were estimated in 2013, which might significantly develop in Northern America and New Zealand compared with the insignificant development in Europe toward Asia region and less-developed countries.

The different rates of mortality of leukemia in the developed countries rather than other countries could be due to different healthcare systems, production and accessibility of effective medications, and stem cell implantation for some types of leukemia (24).

In the study of Hjalgrim et al. performed on the specific incidence of leukemia based on age and gender in infants in 5 Scandinavian countries, including Sweden, Denmark, Norway, Finland, and Ice Land, they estimated the incidence rate of acute lymphoblastic leukemia during the five 4-year periods from 3.84 to 4.03 cases per 100000 people with the annual mean of 0.22% (30).

Leukemia is often accompanied by fatigue, fever, bleeding, chest pain, and splenomegaly. Therefore, leukemia is one of the common causes of child mortality. Identifying effective factors and controlling them and the focus of screening programs on specific subtypes can lead to early detection and effective treatment of the patients (32).

Lack of adequate space, proper nutrition and para clinical useful facilities for detecting complications of chemotherapy drugs in addition to cultural and health problems as well as family poverty can increase the mortality rate of this disease. Since the prevalence of factors affecting leukemia varies corresponding the time and population, the study of effective factors in different regions can lead to more accurate identification of factors to reduce the incidence and mortality of the disease.

Monitoring cancer incidence trend is considered one of the most important branches of cancer supervision system. Evaluation of cancer incidence rates could provide important information about risk factors and possible changes that help us to find ways so as to reduce the incidence of cancer in infants. Thus propagating of screening programs, application of correct and on-time diagnosis and treatment of the disease in infants could decline the rate of mortality in these patients.

Copyright © 2019, Journal of Comprehensive Pediatrics. This is an open-access article distributed under the terms of the Creative Commons Attribution-NonCommercial 4.0 International License (http://creativecommons.org/licenses/by-nc/4.0/) which permits copy and redistribute the material just in noncommercial usages, provided the original work is properly cited.
download pdf 322.02 KB Get Permission (article level) Import into EndNote Import into BibTex
Number of Comments: 0