Age at Menarche and Its Related Factors Among Students of Qaen, Eastern Iran: A School-Based Cross-Sectional Study 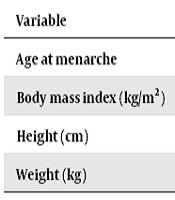 Age at menarche is the key indicator of puberty in females and the reflector of populations’ health that different hereditary and environmental factors can affect it.

This study was conducted to determine the age at menarche and its relationship with body mass index (BMI) and demographic factors among students of Qaen, Eastern Iran.

This cross-sectional study was conducted on 400, 10 - 16-year-old students of Qaen located at the East of Iran, in 2016. The participants were selected by the random multistage sampling of students in elementary and secondary schools that were eligible to participate in the study. Data collection was carried out through interviews and a checklist including demographic and menarche information as well as height and weight measurements in schools. The data were analyzed using SPSS V. 18 by Pearson’s correlation, t-test, and multiple linear regression.

The onset of menstruation and the age which the first menstrual period occurs is considered as the age at menarche, which is an important sign of the puberty in females and a health and socioeconomic status index of societies (1-3). Heredity is the most important factor for determining puberty and age at menarche, which is confirmed by studies that examine the relationship between age of puberty in mother and daughter or sisters (4). However, in addition to inheritance, other factors which have been different and sometimes contradictory in studies also affect the onset time and the progress of puberty. These factors include economic and social status, public health, location and geographical location, nutrition, exposure to light, mental status, chronic diseases, and environmental stimuli (5-7).

The results of studies have shown that during the last decades, the age of puberty and the occurrence of menarche has been reduced in various developed and developing societies, due to improved nutrition and hygiene and improved economic and social status (8, 9). Early age at menarche among females puts them at risk of accelerating skeletal maturity and shortening height in adulthood. Due to the rapid closure of epiphyseal plates in bones, early onset of sexual activity and social and psychological problems are also among other important complications of early puberty (6, 10, 11). According to the studies, early menstruation at an early age is a risk factor for cardiovascular problems, metabolic syndrome, and breast and ovarian cancer, and is associated with an increase in the prevalence of painful menstruation and adolescence pregnancy (1, 6, 10).

The results of some studies have indicated that obesity is one of the causes of early puberty and early menstruation in a person with no specific disease (12). However, in some studies, the effects of overweight and obesity in accelerating the onset of menarche and signs of puberty have been refused (1, 13). In the Sharifi et al.’s study (11) a significant inverse correlation was observed between age at menarche and body mass index (BMI), however, there wasn’t any significant correlation in the Demerath et al.’s study (14).

The present study was a cross-sectional study and study population was all girl students studying at elementary and secondary schools in the city of Qaen in East of Iran in 2016. The sample size was estimated based on the mean estimating formula (n = z2s2/d2) and results of the Sharifi et al.’s study (15); 400 girls were selected by multistage sampling. First, the city of Qaen was divided into five geographical regions (North, South, East, West, and Center), and then in each stratum from the list of girls’ schools, an elementary school, and a secondary school were selected randomly. Then in the selected schools, for each desired grade, one class was randomly chosen. All students in the class who remembered the time of menarche and their menstruation had started 6 months ago, were included in the study. The presence of any underlying and systemic diseases that affect the growth of the individual (such as chronic heart disease, diabetes, thyroid, and hormonal disorders), use of hormonal weight-reducing or increasing drugs, and the presence of diseases such as polycystic syndrome, because of the possibility of relation with obesity or effect on incidence of puberty symptoms, were among the exclusion criteria (4, 10).

Before gathering the data, the objectives of the study were described to students and their parents. It was also assured that all information would remain secret to the researchers and consent was obtained from the parents of students. The present study was approved by the Ethics Committee of Birjand University of Medical Sciences (ethics code: IR.BUMS.REC.1394.86). Data collection were done by interviewing, measuring height and weight, and completing a checklist including demographic questions (including age, studying grade, maternal age, birth order, family size and duration of sleep); questions about the age at menarche was conducted by two midwives in schools. A part of the checklist was due to measuring height and weight for calculating BMI using standard and identical tools including the German Seca portable digital scale along with a graded vertical bar for measuring weight and height, where the weight was measured in light clothing, without shoes, and accuracy of 100 g and height according to an upright position and bare-footed and accuracy of 0.5 cm.

Finally, after gathering the data, they were transferred to SPSS (PASW Statistics for Windows, version 18.0, Chicago: SPSS Inc., USA), and in addition to representing descriptive statistics, they were analyzed by Pearson’s correlation coefficient, independent t-test, and multiple linear regression, at the level of α = 0.05.

Table 1. Description of Age at Menarche, BMI, Height and Weight in Students

Table 3. Multiple Linear Regression to Estimate the Age at Menarche in Terms of Height, Sleep Duration, and Maternal Age in Students

Based on the results of the present study, there was a significant inverse correlation between age at menarche and BMI, so that by increase of BMI, the age at menarche decreased, which was consistent with the results of studies by Farahmand et al., in Tehran (16), and Mohamad et al., in Kish Island (17). In the studies of other countries, Wronka in Poland (7), Cho et al., in South Korea (3), and Harris et al., in Canada (8) confirmed this inverse relationship. However, this relationship was not significant in the study by Keshavarzi and Azad-bar study in Kermanshah (2) and the Demerath et al., study in the United States (14).

The reason of this relationship is not completely clear, however, some studies have found it necessary to have a certain percentage of body fat or specific weight and height for menarche occurrence, and believe that thin people catch these necessary values later and have later menarche (18, 19). Other studies consider this as a result of hormonal changes in obese people (20, 21), and some have mentioned the role of childhood obesity in early menarche and obesity in adulthood (22, 23). Due to the importance of obesity and overweight as a major risk factor for non-communicable diseases and complications of early menarche as a risk factor for some diseases such as breast cancer and cardiovascular disease (24-26), planning for suitable interventions for prevention and treatment of obesity and overweight in childhood and adolescence is more necessary.

In the studies of different countries, the mean age at menarche has been 12.4 in European girls (31), 12.96 in Indonesia (9), 12.9 in Korea (3), and 12.54 in the United States (32). Given the many hereditary, geographical, cultural, and socioeconomic factors affecting the age at menarche, the observed differences can be justified, although different methods of data collection and implementation of studies can also affect these differences.

The concern about the age at menarche in different societies is its decreasing trend as a risk factor for breast cancer and cardiovascular disease (24-26). However, due to the lack of a similar study in the city of Qaen, it was not possible to compare the results and to investigate the trend of menarche age, however, the study of Mohammad et al., reported the mean age at menarche in the eastern regions of Iran in 1990 as 13.81 and 13.67 in 1999, which is more than the present study (33). The lower mean age at menarche in elementary school students, in comparison to secondary school students in the present study, can also be indicative of a decreasing trend in age at menarche. Studies in different parts of the world have confirmed the decline of age at menarche and have mentioned it as a result of changes in lifestyle, industrialization, and the improvement of the socioeconomic status of the societies and the promotion of nutrition and public health (3, 8, 14, 32, 33).

The results of this study showed that there was a significant positive correlation between age at menarche and height of students, which was also significant in the regression model, after adjusting for other variables, and with increasing age at menarche, the height also increased. It seems that the results of various studies in this area have been different with regard to the height measured before or after the menarche. In the studies of Farahmand et al., in Tehran (16), and Hossain et al., in Bangladesh (34), in which height was measured after the menarche, as in the present study, there was a positive correlation between age at menarche and height. However, in studies of Krzyzanowska et al. (23), and Freedman et al. (35), which the height was measured before reaching the menarche, this relationship was negative, and the taller girls had reached the menarche earlier. Although this association has not been significant in some studies (22, 36), it seems that girls who have reached the menarche age sooner and reach sexual maturity, skeletal maturation also occurs earlier in them and their maximum growth is seen earlier as the reason of the closure of epiphyseal growth plates (35, 37). Therefore, girls who have reached menarche earlier than their peers are more likely to be higher in adolescents; however, girls who later reach menarche will be higher due to more longitudinal growth in long bones (38, 39).

In the present study, there was no significant relationship between age at menarche and weight of students, which was consistent with the results of most studies in Iran (11, 16, 36). Kim et al. (38), in a study on Korean girls aged 10 to 18, concluded that girls who had reached menarche were significantly heavier than girls who had not reached menarche. In the Krzyzanowska et al.’s study on British girls (23), there was a negative relationship between age at menarche and childhood weight, and heavier girls had reached menarche sooner.

In the present study, the age at menarche had a significant relationship with the birth order of students and the family size, and with the increase in the birth order and the number of family members, the age at menarche was increased, which was similar to the study of Krzyzanowska et al., in the United Kingdom (23). This relation could be due to a lower social economic level, a crowded family, and less attention to children in more populous families.

One of the most important limitations of this study is its cross-sectional nature, the self-reported age at menarche, and its recall bias. For further investigation of the factors affecting the age at the menarche and confirming the causal relationships, longitudinal studies are suggested in the future.

We would like to thank the participating students and all the people who helped us conduct this project.