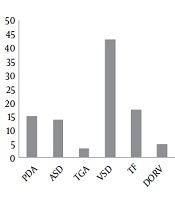 Prevalence of Malnutrition in Children with Congenital Heart Disease

Congenital heart defect (CHD) is the most common congenital anomaly in infants and is known to be a leading cause of malnutrition.

This study aimed to provide insights into the prevalence of malnutrition in children with CHD in Iran.

The study enrolled 515 under-five children with CHD. The diagnosis was based on the definitive result of cardiac catheterization report. They were divided into the subgroups of cyanotic with pulmonary hypertension (PH), acyanotic with PH, cyanotic without PH, and acyanotic without PH according to their diagnosis. The degree of growth failure and the severity of malnutrition were evaluated based on the WHO standards (z-score criteria) in three categories as mild (-1.1 to -2.0 SD), moderate (-2.1 to -3.0 SD), and severe (≤ 3 SD).

The study showed that the prevalence of malnutrition in children with CHD aged under 5 years was noticeably high at this center in Iran. The administration of nutritional requirements such as low-volume and high-calorie diets should be considered for these vulnerable children.

Congenital heart defect (CHD), also known as congenital heart disease, occurs due to a defect in the formation of the heart structure or its vessels during the embryonic period. Such diseases can range from simple and mild cardiac diseases, which cause no serious problems, to complex and severe cardiac diseases, which may lead to the emergence of severe complications in infants (1). The prevalence of CHD among infants has shown to be different in various studies ranging from 6 to 10 cases per 1000 births (2).

Malnutrition is of high prevalence among CHD infants and plays an important role in mortality, hospital infections, and increased length of stay (LOS) of such infants. Regarding the limited protein and fat reserves, high energy expenditure, and increased energy requirement for further growth, infants are more prone to malnutrition than adults. The newborn infants with CHD, particularly those with pulmonary hypertension (PH), will commonly have poor postnatal weight gain despite good birth weight (2).

The degree of malnutrition may be associated with the characteristics of CHD, including the presence of cyanosis and PH. Infants with cyanosis are prone to retardation in both weight and length. Infants with acyanotic lesions have difficulty in gaining weight. Thus, cyanotic defects and PH are very high-risk conditions for these infants (1).

The incidence of malnutrition in infants with cardiovascular diseases (CVDs) depends on several factors, including:

Thus far, no accurate statistics have been presented on the prevalence of malnutrition among Iranian infants with congenital cardiovascular diseases. Thus, the present study aimed to estimate the prevalence of malnutrition among under five-year-old infants with CHD referring to Rajaei Cardiovascular Medical and Research Center. The study paves the way for applying appropriate nutritional strategies to prevent malnutrition progress during the hospital stay and thereby, take some steps toward resolving the problem.

The present cross-sectional study was conducted on 515 under-five infants with CHD referring to Rajaei Cardiovascular Medical and Research Center from July 2016 to January 2017. The infants were admitted for the first time to the children’s wards. The data including height (cm), weight (kg), and age (months) of the infants were recorded by a trained nurse immediately on admission. The infants’ weight was measured by a Seca 334 portable digital baby scale (with the accuracy of less than 5 g) and a Seca 786 mechanical column scale (with the accuracy of 0.3 kg) and their height was determined using Seca 217 and Seca 207 stadiometers with the accuracy of 1 mm.

Furthermore, the diagnosis of the disease was based on the patients’ echocardiography reports. The PH status of the studied infants was determined using the given Cath reports. The mean pulmonary arterial pressure of above 25 mmHg was considered as the indication of PH. In terms of age, the infants fell into the age group of 0 - 60 months.

Statistical analysis was performed using SPSS 22 for Windows (SPSS Inc., Chicago, Illinois). Data were expressed as means ± standard deviation numerical variables and count (%) for categorical variables. One-sample Kolmogorov-Smirnov test was used for evaluating the distribution of data. Mann-Whitney U test, Wilcoxon test, and chi-square test were employed to test the relationship between the variables and groups. A multivariable logistic regression model was developed based on variables with significant results (P < 0.05) from univariable analysis to predict severe malnutrition in patients with CHD. A P value of < 0.05 was considered statistically significant.

In total, 515 children with CHD were included in the study. The mean age of the patients was 19.9 ± 16.8 months and 239 patients (46.4%) were male. The frequency of cardiovascular defects in patients is demonstrated in Figure 1.

Frequency of cardiovascular defects in patients

The type and the severity of malnutrition were determined in infants through comparing their height and weight with standard tables; then, the relationship between malnutrition and heart diseases was evaluated. The nutritional status of the patients is demonstrated in Table 2. Among the studied infants, 102 infants (19.8%) had the normal status of nutrition, whereas 84 infants (16.3%) were diagnosed with mild malnutrition, 124 (24.1%) with moderate malnutrition, and 205 (39.8%) with severe malnutrition.

Table 2. Nutritional Status and Patterns of Malnutrition in Patients

The causes of malnutrition in children with CHD include insufficient energy intake, nausea-induced malabsorption, decreased splanchnic blood flow, delayed gastric emptying, intestinal edema, and increased nutrient excretion in conditions such as fatty diarrhea, protein-losing enteropathy, and increased energy requirement. Therefore, the lack of energy intake is the most important identified cause of malnutrition and growth retardation among these infants. Anorexia is also common among these infants and it is another factor that reduces their food intake and worsens their status. In addition, chronic hypoxia can lead to anorexia and nutritional problems in cardiac patients, one of the complications of which is malabsorption. In children with CHD, the heart and lungs get overworked, which can result in the increased energy requirement. Typically, these children need 50% more calorie intake than their healthy peers. Consequently, these factors altogether would lead to the worsening of their nutritional conditions and the incidence of malnutrition in these children (7).

To date, numerous studies have addressed the effect of CHDs on children’s growth. In this regard, Linde et al. showed the delayed height and weight growth among cyanotic infants compared to acyanotic ones. Nevertheless, they disregarded the effect of pulmonary hypertension on malnutrition (8). Salzer et al. reported that infants with a left-to-right shunt were more prone to weight loss, and were also thinner than those with cyanotic diseases (9).

The present study was conducted on 515 infants with CHD aged less than 5 years (0 - 60 months), including 239 males (46.4%) and 276 females (53.5%), who were admitted to Shahid Rajaei Cardiovascular Medical and Research Center. The highest prevalence rate of CHDs in this study was related to VSD (42.9%), followed by TOF (17.3%). Regarding the type of disease (i.e. cyanotic or acyanotic) and the presence/absence of PH, the studied infants were divided into four groups: cyanotic with PH (n = 36, 7%), acyanotic with PH (n = 157, 30.5%), cyanotic without PH (n = 174, 33.8%), and acyanotic without PH (n = 148, 28.7%). The type and severity of malnutrition in these infants were determined by comparing their height and weight with standard tables to examine the relationship between malnutrition and heart diseases.

As indicated by Leite et al. study on 30 infants with the left-to-right shunt (16 with PH and 14 without pH), malnutrition was more prevalent (83.3%) among infants with PH (P = 0.01) so that this group was more prone to wasting than the group without PH. Finally, PH was shown to be an underlying factor that provides the ground for nutritional problems (12).

According to the findings of this study and other studies in this regard, the presence of pulmonary hypertension is considered as one of the main causes of malnutrition among children (14, 15).

Our study ignored many other factors, such as economic and cultural status of families, food and calorie intake, and the real needs of CHD children, which might have contributed to the incidence of malnutrition. Another limitation of the present work was the lack of reporting the biochemical and blood factors such as Hb, serum albumin, total protein, etc.

We would like to thank all pediatric cardiology staff at Rajaei Cardiovascular Research Center who assisted in this study.

Copyright © 2019, Journal of Comprehensive Pediatrics. This is an open-access article distributed under the terms of the Creative Commons Attribution-NonCommercial 4.0 International License (http://creativecommons.org/licenses/by-nc/4.0/) which permits copy and redistribute the material just in noncommercial usages, provided the original work is properly cited.
download pdf 136.40 KB Get Permission (article level) Import into EndNote Import into BibTex
Number of Comments: 0