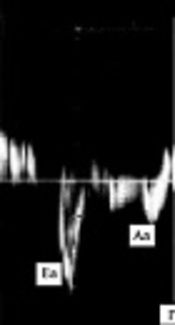 The Tei index is used to evaluate the overall performance of the right ventricle. The index can be measured with pulsed Doppler echocardiography (PW) and tissue Doppler imaging (TDI). Some studies show that severe pulmonary valve regurgitation (PR) can influence the Tei index calculated by the PW method.

The purpose of this study was to compare PW and TDI in calculating the Tei index in PR patients following TOF reconstruction.

We evaluated 21 patients with severe PI who were reconstructed and 21 age-matched normal children. All the children went through PW or TDI. The intensity of Sa, Ea, Aa, IVCT, and the Tei index were calculated.

TDI is a more accurate method for calculating the Tei index for evaluating the overall performance of the right ventricle in PR patients after TOF reconstruction, and the Tei index calculated through PW had limitations for this purpose.

Tetralogy of Fallot (TOF) is one of the most prevalent cyanotic heart lesions. Total surgical repair has proven to be a definite cure since 1954 (1). About 80% of these patients have pulmonary valve stenosis (2); thus, they need widening of the pulmonary annulus with tran annular patch (TAP) (3). Pulmonary regurgitation (PR) is an inevitable long-term complication of the surgery that can lead to right ventricular systolic and diastolic dysfunction. Evaluating the Tei index is a non-invasive method for assessing the right ventricular function. This index can be obtained by pulsed Doppler (PW) or tissue Doppler imaging (TDI).

This study aimed to investigate the two methods in calculating the Tei index in TOF patients with PR following surgery.

This cross-sectional study was conducted between March 2017 and March 2018, with 21 subjects as cases and 21 as controls. The inclusion criteria were defined as the TOF patients who undergone total correction surgery with TAP without any history of previous palliative surgery that had at least moderate pulmonary valve regurgitation. The exclusion criteria were defined as the existence of an arrhythmia and residual pulmonary valve stenosis with a pressure gradient of more than 40 mmHg. The control group was chosen from healthy children with no history of cardiac involvement following a full examination. Ethical approval for the study was obtained from the institutional review board.

The PW two-dimensional echocardiography was performed using Mylab 60 Echocardiography device with 3.5 and 5 MHz transducers. The tissue Doppler imaging was performed by activating the TDI in the same device. Positioning the Doppler sample volume at the tips of tricuspid leaflets, the tricuspid inflow velocity patterns were recorded from the four-chamber view. Angle correction was not performed. In the same apical four-chamber view, a 2-mm sample volume was located on the external side of the Tricuspid valve annulus with a sweep speed of 100 mm/s for acquiring peak myocardial velocities during systole (Sa), early diastole (Ea), and late diastole (Aa). Two carefully placed vertical cursors were used for recording the intervals (Figure 1). All data were analyzed by SPPS version 17. Statistical significance was considered at P value = 0.05.

4.1. Echocardiographic Results for the Controls

4.2. Echocardiographic Results for the Cases

4.3. Comparing the Cases and Controls

Table 2. Tei Index Measured By PW and TDI in TOF Patients and Controlsa

Tetralogy of Fallot (TOF) is one of the most prevalent cyanotic congenital heart diseases. Pulmonary valve stenosis is found in 80% of these patients (2). In 1954, the complete repair of the defect was performed, including ventricular septal defect closure and pulmonary stenosis resolving, which has been preferred for almost every patient since then (1). Most of the patients have small pulmonary annulus that necessitates the surgeons to use the transannular patch (TAP) for widening the pulmonary annulus (3). Pulmonary valve regurgitation (PR) is known as an important long-term complication of the TOF total repair, which additionally leads to right ventricle systolic and diastolic dysfunction, dilation, and arrhythmia (4-6). Sudden death may occur as a result of pulmonary valve regurgitation plus impaired right ventricle function (2). Furthermore, based on our study, the impaired RV and PR following TOF total repair caused longer contraction time and isovolumic loosening, showing systolic and diastolic ventricle function, as well as diastolic velocity (Ea and Aa) and systolic myocardial (Sa) decrement. The IVCT and IVRT were longer and the values of Ea, Aa, Sa, and TAPSE were significantly lower in TOF patients than in the control group.

The Tei index, first described by Tei et al., is a Doppler index for the assessment of both systolic and diastolic functions of the left ventricle (7). Moreover, it has been found useful for assessing the right ventricle function in the fetus (8, 9) and children (10-12). However, this index is not sensitive enough in patients with significant PR who had undergone TOF total repair (13). The Tei index obtained by tissue Doppler imaging (TDI) has proven to have a high correlation with that obtained by pulsed Doppler (PW) (14, 15).

PR brings about the augmentation of the ejection fraction of the right ventricle, which results in no changes in the b time obtained by PW. In conclusion, the Tei index will be lower than the real amount in these patients. In other words, the Tei index obtained by PW will be in the normal range falsely. Based on our findings, calculating the Tei index by TDI is more accurate than by DW for evaluating the overall performance of the right ventricle in PR patients after TOF reconstruction.

Copyright © 2019, Journal of Comprehensive Pediatrics. This is an open-access article distributed under the terms of the Creative Commons Attribution-NonCommercial 4.0 International License (http://creativecommons.org/licenses/by-nc/4.0/) which permits copy and redistribute the material just in noncommercial usages, provided the original work is properly cited.
download pdf 257.27 KB Get Permission (article level) Import into EndNote Import into BibTex
Number of Comments: 0