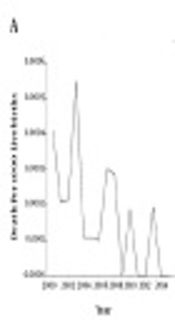 Trend Analysis of Mortality Rates for Leading Causes of Death Among Under-Five Children in Iran, 2000 - 2015

This secondary study is the first to assess the trend of mortality rate and its variations among Iranian children.

The mortality data of under-five children were extracted from the WHO reports. All-cause and cause-specific mortality rates were calculated per 1000 live births and by age groups for each year from 2000 to 2015. The average annual rate of reduction (AARR) was used to determine the changes in mortality rates.

Of 21011 under-five children who died in 2015, 52.3% were attributed to infectious causes. The overall mortality rate among children under five years decreased from 35 per 1000 live births in 2000 to 16 per 1000 live births in 2015, representing a decline of 55.5% over the 16-year period with an AARR of 5.5%. There was a significant decreasing trend in the mortality rates of all causes except for HIV/AIDS and pertussis.

The overall all-cause mortality rate decreased from 2000 to 2015 in Iran although this pattern varied according to the causes of death. There is still a relatively high proportion of mortality rates among children due to congenital anomalies, prematurity, birth asphyxia, sepsis, and acute lower respiratory infections.

Although child mortality has a decreasing trend worldwide (1), it is estimated that more than six million children die before the age of five years (2). This is while most of the death causes are preventable and they predominantly occur in poor countries. There is considerable inequality in the children’s mortality rate between countries so that six countries account for 50% of the under-five deaths worldwide (3). The infant mortality rate (IMR) is one of the most important indices to determine the economic, cultural, social, and public health status of countries (4).

Numerous epidemiological studies have been conducted around the globe on infant and childhood mortality (2, 5-8), many of which have reported that more than half of the deaths are attributed to infectious causes (2, 6). In addition, based on the global statistics, the leading causes of death include preterm birth complications (14.1%), intrapartum-related complications (9.4%), and sepsis or meningitis (5.2%), as well as pneumonia (14.1%), diarrhea (9.9%), and malaria (7.4%) among older children (9).

Several studies have used local and national data of infant and children’s mortality rates in Iran (10), all of which have focused on the causes of death and reported a decreasing trend in the children’s mortality rate based on comparisons with other findings. However, it is not well known whether the fourth Millennium Development Goals (MDGs) regarding a reduction in child mortality by two-thirds between 1990 and 2015 have been achieved (11).

This secondary cross-sectional study was conducted in 2016 based on the mortality data of children under five years of age extracted from the World Health Organization (WHO) observatory database (12).

The minimum required data including age groups (0 - 27 days, 1 - 59 months), the cause of death, the year of death, and mortality rate per 1000 live births were extracted from the global health observatory database. The causes of death included congenital anomalies, acute lower respiratory infections, diarrhea, other communicable, perinatal, and nutritional conditions, prematurity, birth asphyxia and birth trauma, sepsis and other infectious conditions of the newborn, tetanus, pertussis, measles, HIV/AIDS, malaria, injuries, and meningitis/encephalitis.

The average annual rate of reduction (AARR) was calculated using the regression analysis to quantify the changes in mortality rates during the study period. To this end, the mortality rate of each cause was considered as the dependent variable and the year as the independent variable. For example, the mortality rate in our analysis in a baseline year t0 (the year 2000) was Y0 and 16 data points (2000 - 2015) after t0 were considered for trend analysis; then, each of the 16 points could be written as:

is a constant in a simple linear regression of ln(Yi) against ti. Then, using the coefficient B, the AARR was calculated based on the following formula (13):

For example, the AARR of 5.5% for all causes in Figure 1 was calculated based on Table 1. More than 52% of 21011 deaths occurring among under five-year children in 2015 were due to infectious causes. Among 10029 deaths from non-communicable diseases, 47% and 36.3% of them were attributed to prematurity and congenital abnormalities, respectively. The mortality rates per 1000 live births by the cause of death and age groups in 2015 are shown in Table 2.

bThere was one value for Tetanus and Malaria. We found a significant decreasing trend in the mortality rates of all causes and by age groups. The under-five all-cause mortality rate decreased from 35 (95% CI: 13.6 - 56.3) to 16 (95% CI: 5.7 - 28.7) per 1000 live births in 2000 - 2015. The AARR of 5.5% found in this study was higher than the rates of some neighboring countries (17) like Iraq (AARR = 2.1%), Pakistan (AARR = 2.1%), and Saudi Arabia (AARR = 4.5%) and lower than the rate of Turkey (AARR = 6.8%). Similar studies from China showed a downward trend in under-five mortality rate by 71% from 1990 to 2008, which was mainly attributed to declines in deaths from pneumonia, birth asphyxia, and preterm birth complications (18). Over years, various nationwide health programs and initiatives have established by the Ministry of Health and Medical Education (MOHME) of the Iranian government to promote the health care of pregnant women, newborns, and infants, such as mother and infant care in primary health care (PHC), immunization, screening of congenital abnormalities, family physician plan, prenatal diagnosis testing and recently, health sector evolution. All of these programs aimed to reduce the maternal and children mortality rates to achieve the MDGs. Therefore, the mortality rate of children should be considered as a health issue in the region.

Another main finding of our study was a significant declining trend in mortality rates of congenital abnormalities (AARR, 6.0%), sepsis (AARR, 8.4%), prematurity (AARR, 24.3%), and birth asphyxia (AARR, 14.3%) among newborns in 2000 - 2015. We suggest that the great part of the overall reduction rate (55.5%) was attributed to a decline in the death rates of these causes. Among the four major causes of death, congenital abnormalities with an AARR of 6.0% remain a public health concern. A study on the trend of death causes has predicted an increasing pattern in deaths from congenital abnormalities in the long term (18). Cui et al. (5) showed a decreasing trend in the congenital anomalies-specific under-five mortality rate from 407.7 per 100000 live births in 1996 to 217.4 per 100000 live births in 2013, with an AARR of 6.4% and 3.8% in urban and rural areas, respectively. They also concluded that congenital anomalies are becoming one of the leading causes of death in the community (5). A large epidemiologic study to determine global, regional, and national causes of child mortality in 2000 - 2013 showed that sepsis, prematurity, and birth asphyxia were the most common causes of neonatal deaths, followed by congenital abnormalities (2). A national study has also reported that the most common causes of mortality are congenital and chromosomal abnormalities among Iranian children aged 1 - 59 months (15). As a result, monitoring the trend of mortality rates and addressing the most common causes of deaths are crucial to informing what diseases to prioritize, which can help policymakers to better plan for health at national and local levels.

Despite the high coverage of immunization programs in Iran (19), there are still a number of deaths due to vaccine-preventable diseases. In our study, there was a significant declining trend in the deaths from tetanus and measles, but this descending trend was not found for pertussis mortality. There was a downward slope in the trend of measles mortality in 2003. One reason can be the mass immunization campaign against measles and rubella established in 2002 to eliminate the disease (20). In a study conducted in the Czech Republic to determine the epidemiological situation of pertussis, an upward trend in pertussis in under-one children was observed during 1997 - 2013 (21). Some reasons may explain this result. Rejali et al., for example, showed a high incidence rate of delayed vaccination (22); moreover, non-Iranian immigrants may also play a role in the Iranian immunization program (19).

A significant declining trend was found in the mortality of infectious diseases such as diarrhea, meningitis, and acute lower respiratory infections. Despite this declining trend, there are still some cases of mortality among children in Iran and another region (23). In addition, emerging different types of influenza and viral respiratory co-infections should be considered as an important issue in the mortality rate among children (24). A local Iranian study to evaluate the knowledge of mothers with under-five children about diarrhea reported inadequate knowledge about the diagnosis and treatment of diarrhea among this group of mothers (25), emphasizing the need for direct educational programs towards this target population. In this regard and according to the promotion of health literacy in women, an international conference on women’s health is annually held in Iran (26).

Our results also indicated that the mortality rate of HIV/AIDS had a significant upward trend as a serious public health problem, which should be considered for interventional programs (29). The proportion of HIV/AIDS deaths increased with an AARR of 0.1% over the 16 years. This is consistent with other reports in Iran and other regions, reporting an increasing trend for HIV (30). The change in the transmission patterns of HIV/AIDS in our country over time (31) may justify the upward trend in our study. For example, the role of sexual transmission has increased from 4.2% in 2001 to 21.1% in 2010. In addition, the low proportion of HIV-testing among women (32) and the lack of awareness about HIV prevention (33) have been reported in previous studies.

This study had some limitations. We used the national secondary data from the WHO reports and there was limited access to data at the provincial level. Hence, future research may make effort in local and national data collection to generate the patterns of mortality rates in children to improve the better estimation. We also did not have any information about other variables such as gender, place of residence, medication errors, or adverse drug events to perform subgroup analysis. In addition, as stated in the methods section, the age-cause-specific mortality rates were pooled to obtain the overall mortality rate in each year, which might have led to a phenomenon known as Simpson’s paradox. Accordingly, the overall mortality rate in our study may differ from the rate reported by the UNICEF (17). Despite these limitations, the trend analysis of mortality rate adds insights into time changes and helps identify the potential planning issues to achieve the targets of MDGs.

The overall all-cause mortality rate in children decreased from 2000 to 2015 in Iran although this pattern varied according to the causes of death. There is still a relatively high proportion of mortality rate among children due to congenital anomalies, prematurity, birth asphyxia, sepsis, and acute lower respiratory infections. Accordingly, more effective strategies in perinatal, neonatal, and children health care are needed to achieve further prevention and control of the mortality.

Copyright © 2019, Journal of Comprehensive Pediatrics. This is an open-access article distributed under the terms of the Creative Commons Attribution-NonCommercial 4.0 International License (http://creativecommons.org/licenses/by-nc/4.0/) which permits copy and redistribute the material just in noncommercial usages, provided the original work is properly cited.
download pdf 713.49 KB Get Permission (article level) Import into EndNote Import into BibTex
Number of Comments: 0