A Retrospective Survey of Pediatric Urethral Stricture in Isfahan, Iran 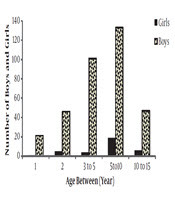 In order to ensure maximum recovery, stenosis management of the narrow and fragile tissue of urethra in children should be based on ingenious preserving of adequate urethral caliber.

Owing to advancements in pediatric surgery that lead to improving the quality and quantity of life in recent years, it is necessary to evaluate urethral strictures and its management. With this respect, we studied the management of children with urethral strictures in two tertiary hospitals in Isfahan, Iran.

After obtaining ethical committee clearance (code number 396454), a retrospective search of the hospital information system was carried out for urethral stricture in children aged up to 15 years from 2008 to 2018. We studied all children who underwent the management for urethral strictures associated with recorded data (ICD-10; n = 35.9). Data were analyzed by SPSS and age, as a continuous variable, was expressed as mean ± standard deviation (SD). A P value of < 0.05 was considered statistically significant.

For over a period of 10 years, there were 383 children, including 348 boys and 35 girls, with the mean ± SD age of 5.5 ± 3.4 years old. The management strategies for boys with the disease of urethra ranked as: dilation of urethra (n = 99), urethral meatotomy (n = 82), urethral meatoplasty (n = 75), urethrotomy (n = 7) and unspecified management (n = 85). In girls, the ranked values corresponded to dilation of urethra (n = 14), diagnostic ureteroscopy (n = 7), and unspecified management (n = 12). There was a significant difference associated with age in each subgroup. Statistical analysis based on the Kruskal-Wallis test showed a significant difference between the variables (P < 0.0001). The minimum age for urethrotomy in the population studied was 4 years old.

In pediatric, surgical treatment is an optimistic surrogate transaction to take the majority of cases with urethral strictures. As a result, in order to decrease complications such as incontinence, impotency, and surgical risks associated with major reconstructive procedures, proper repair at the appropriate time is recommended.

In those with (1) short bulbar stricture of urethra (2) failed urethroplasty with stenotic annular rings, urethrotomy and dilation are acceptable choices of management. Anastomotic urethroplasty via a perineal approach could successfully repair anterior urethral strictures of the bulb if short, and buccal graft substitution urethroplasty if long. When the defect of the urethra is longer, a transpubic or partial pubectomy posterior anastomotic urethroplasty is needed in most cases. In general, the rate of success for urethroplasty was mentioned in about 83% (4-7). Irritative voiding symptoms, including dysuria, urgency, frequency, initial hematuria may be accompanied with urethral strictures (8-13).

It is well-known that urethral stricture is a condition that can permanently destruct the total urinary tract if not managed properly. In children, most existed data are usually extrapolated from the adult literature. With this in view, we aimed to study the management of children with urethral strictures in two tertiary hospitals in Isfahan, Iran.

This investigation was conducted at the Isfahan Kidney Transplantation Research Centre (IKTRC). The Institutional Review Board approved the study by ethics code number: 396454. Patients with urethral stricture disease and admitted to the two tertiary hospitals (Alzahra and Khorshid) were recognized. In the first step, urethral strictures were defined according to the International Classification of Diseases (ICD-10) by the code (n = 35.9) from hospitals registry databases’. In the second step, all pediatric patients (aged up to 15 years) with urethral strictures were studied for over 10 years from 2008 and 2018. There were no exclusion criteria and a retrospective plan of evaluation was expected for patients regarding basic demographics and clinical management. Microsoft Excel was used to arrange raw data before being inputted into the Statistical Package for Social Science (SPSS® version 20; IBM Corp., Armonk NY, USA) for analysis. Age, as a continuous variable, was expressed as mean ± standard deviation (SD). The normal distribution of age was tested using the Kolmogorov-Smirnov test. Variables such as gender, age, and type of management were expressed by the frequency and percentage. Figure 1. Distribution of age in the boys and girls with urethral strictures Figure 2. Management treatments for urethral disorders in the girls Figure 3. Management treatments for urethral disorders in the boys
Table 2. Management of Disorders Associated with Urethra in the Boys

Previous studies confirmed that meatal stenosis occurs when there are recurrent meatitis and local irritation at the junction of the glans epithelium and urethral mucosa. Epithelium denudation and side-to-side adherence most normally starts centrally and extends toward the glans tip. This decrease in caliber leads to diminished urinary stream and strenuous voiding, which further causes cracking of the meatal edges and meatitis, resulting in dysuria and this vicious circle continues. In the pediatric population, over time, meatotomy has developed as an optimistic procedure that is often done under local anesthesia with or without penile block or under short general anesthesia (12).

In this study, the treatment of urethral strictures was based on dilatation method in most cases. Meatotomy (31%), meatoplasty (28%), and urethrotomy (7%) were the other surgical treatments of choice in children with urethral stricture. This is in agreement with previous published articles that confirmed urethral meatotomy as a type of treatment for meatal stenosis. Furthermore, there is little known data about the patient experience following meatotomy as a common pediatric urology procedure. Similarly, reconstructive meatoplasty is also suggested as a curative method that can be done under a brief anesthetic.

Moreover, previous studies confirmed that discrepancies in stricture etiology may be related to inherent regional differences and practice patterns, access to quality health care, social and environmental settings, or variation in diagnosis that could lead to variation in the manifestation and treatment. In those who are unresponsive to standard therapy (such as neurogenic bladders), dilation of the urethra can be an effective method with no demonstrated long-term effects on continence (1-16).

Our study demonstrated that 86.2% of surgical treatments for urethral strictures were at the age of 1 to 10 years, and the number of the boys with urethra stricture was 9.9 times higher than the girls. In most cases, the management strategy was based on dilation of the urethra, followed by meatotomy and meatoplasty. The mean age (years) for surgical treatment associated with urethrotomy, dilation of the urethra, meatotomy and matoplasty was as follows: 9.1, 6.4, 4.9, and 4.4, respectively. More extensive studies are needed to recommend the optimum pharmacotherapy guidelines, the length and diameter of stricture, hospital stay as well as overall success rate.

We appreciate Isfahan University of Medical Sciences for supporting this study.