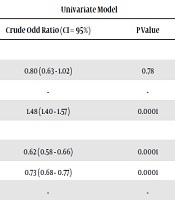 Exclusive breastfeeding contributes to the health and survival of the newborn. Many factors influence this behavior.

This study aimed to identify the related determinant factors.

In this case-control study 8130 cases that did not have exclusive breastfeeding at 6 months of age were matched with 53266 people from control group. The two groups were compared in terms of risk factors such as sex, birth rank, weight, height and head circumference, type of delivery, maternal age, hypothyroidism in the infant, mother’s disease, mother’s educational level, job and breastfeeding at night. Bivariate and multivariate logistic regression was applied to determine the association between independent variables and non- exclusive breastfeeding.

planning interventions aimed at knowledge promotion, encouraging vaginal delivery, paying attention to employed mothers and mothers without breastfeeding at night could be beneficial in improving exclusive breastfeeding among mothers.

The first years of life are the most important developmental period of the child. Therefore, the child’s nutrition during this period plays a significant role in his performance in later years (1). According to World Health Organization (WHO) reports, it is recommended that all children should exclusively breastfeed for the first six months of life. Some studies in industrialized countries have shown a shorter breastfeeding period than 6 months increases the risk of common infectious diseases such as respiratory and digestive infections (2). The positive effect of breastfeeding on both the mother and the child is already proven (3). Breastfeeding is the most ideal type of nutrition during the first 6 months of life and covers all the nutritional needs of the child including vitamins and minerals (4). It is associated with a reduced rate of gastrointestinal and respiratory infections (5).

The studies performed have shown that exclusive breastfeeding has been associated with lower mortality and morbidity (6). In Iran, reports have mentioned that the prevalence of exclusive breastfeeding at six months was only 28% (7). Due to the significant positive impact breastfeeding on child growth, an immediate effort is needed to establish an effective program to promote exclusive breastfeeding (8). The duration of breastfeeding is influenced by several factors, such as: mother’s age and education, nipple problems, contraceptive method and place of residence (city or village), which can be taken into consideration (9, 10).

Different studies have shown that the most important factors associated with the reduction in exclusive breastfeeding in the first 6 months of life are socio-economic factors such as mother’s age, mother’s occupation, mother’s level of education and the child’s rank among the siblings (11). Since then, different levels of intervention have been designed to emphasize on exclusive breastfeeding both in health centers and at the community level.

Since breastfeeding in different societies can be affected by various personal, social and economic factors, given the lack of a research background on this important population-based issue and the necessity of examining it in different situations, the present study was performed aimed at investigating the status of exclusive breastfeeding at the age of 6 months and its related factors in the covered population by Mashhad University of Medical Sciences (MUMS).

This case-control study was performed in 2017 in the covered population by Mashhad University of Medical Sciences. This article has been written with code of ethics IR.MUMS.REC.1396.361. The required data were extracted from the Sina Health Record System (SinaEHR) supervised by MUMS. The recorded information in this system includes the health records of each child. In this study, all children who did not have exclusive breastfeeding during the first 6 months of life were considered as the case group. In total, 61397 children were studied (8130 children in case group and 53266 children in control group). The control group was almost five times larger than the study group. In this study exclusive breastfeeding, based on the WHO recommendation, has been considered since the first day of birth. If the baby has only received breast milk without water or any solid food, it will be accepted as exclusive breastfeeding. The dependent variable in this study was exclusive breastfeeding in the two categories (yes/no). The probable predictive factors were mother’s age, occupation, education, residential area, type of delivery, infant’s sex, weight, height and head circumference (HC), rank of the child among siblings, the presence of hypothyroidism in the infant, diabetes, hypertension or hyperlipidemia in the mother, mental or behavioral disorders in mother, breastfeeding at night and the number of breastfeeding times during 24 hours by the mother.

Data was entered into the SPSS software, Ver 15. In order to determine the study variables were used descriptive statistics. Gayatri logistic regression was applied to specify the factors affecting in exclusive breastfeeding. Variables with a probability value less than 0.2 were included in the bivariate analysis as compared to multivariate analysis to control for possible effect. Adjusted odds ratios with 95% confidence interval were used to assess the degree of dependency and probability less than 5% to report the statistical effect on the dependent variable in multivariate analysis.

Table 1. The Influential Factors on Exclusive Breast Feeding Analyzed by the Logistic Regression Model (for the Infant)

Table 2. Influential Factors on Exclusive Breast Feeding Analyzed by the Logistic Regression Model (for the Mother)

In this research among all the studied variables, factors such as the residential area, rank of the child among siblings, weight, height and HC at birth, type of delivery, maternal age, mother’s educational status, mother’s occupation, presence of a mental or behavioral disorder, breastfeeding at night and the number of breastfeeding in 24 hrs were significantly associated with non-exclusive breastfeeding.

When comparing cesarean section to NVD, the rate of non-exclusive breastfeeding increased significantly, this is consistent with the results of similar studies in Iran (19, 20).

As the results of this study show, the mother’s age at breastfeeding is one of the factors that are inversely related to exclusive breastfeeding. During the last 10 years, this pattern (increased maternal age and decreased breastfeeding) has been repeated in the reports from Iran and other countries, becoming stronger by the passage of time (21, 22).

Furthermore, a significant association was found between breastfeeding failure and the mother’s occupation. The main cause for failure and formula initiation was the mother’s return to work. The results of the study by Jalahi et al. (25) on 462 mothers also showed that a working mother was one of the causes of using artificial milk in children under 6 months. In addition, the results of the study by Merten et al. (26) and Li et al. (27) on 3032 and 212 mothers respectively, showed a significant relationship between mother employment and non-exclusive breastfeeding.

The other important finding was the significant association between the mother’s educational level and breastfeeding failure. Accordingly, the failure of nutrition with breast milk in mothers with a higher educational level was significantly more than others. The results of the study by Mosenzadeh et al. were matched with our study (20).

One of the strong aspects of this study was the application of records of over 61000 infants which can be a true representative of exclusive breastfeeding in the population covered by MUMS. Given the study limitations, the errors made in filling the forms in the system can be mentioned. Supervising the correct registration of data in the electronic file and settings of the electronic form in such a way to avoid possible errors made by users in the recording of information is highly recommended for future research.

Copyright © 2019, Journal of Comprehensive Pediatrics. This is an open-access article distributed under the terms of the Creative Commons Attribution-NonCommercial 4.0 International License (http://creativecommons.org/licenses/by-nc/4.0/) which permits copy and redistribute the material just in noncommercial usages, provided the original work is properly cited.
download pdf 115.79 KB Get Permission (article level) Import into EndNote Import into BibTex
Number of Comments: 0