Spontaneous Gastric Perforation in a Preterm Infant: A Case Report of Etiologies and Anesthetic Considerations 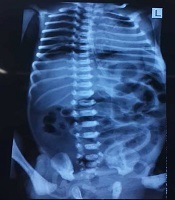 Gastric rupture is responsible for 7% of all gastrointestinal perforations in neonates and has a poor outcome and it can be lethal. There are many situations such as prematurity, asphyxia, excessive respiratory resuscitations and other conditions leading to this condition. We introduce a 2-day-old premature neonate (male) with abdominal distension following nutrition and then we will discuss the anesthetic care for him.

Gastric rupture of neonates is responsible for 7% of all gastrointestinal perforations in neonates. This situation has a poor outcome and it can be lethal. Prematurity, asphyxia, congenital anomalies, stress at birth, excessive respiratory resuscitations, distal obstruction of the bowel, and anatomic abnormalities of the stomach can lead to this condition. The outcome of this situation is worse in male gender, metabolic acidosis, premature birth, and low birth weight. The etiology and prognostic factors of gastric rupture of neonates however, aren’t still fully recognized (1).

A clinical review showed that neonatal asphyxia was the most commonly seen predisposing cause of gastric rupture of neonates (63%). The best diagnostic tool is radiologic imaging of the abdomen and surgical repair is the best treatment (2).

The patient was a 2-day-old neonate with 32 weeks gestational age and birth weight of 800 grams (Figure 1). The patient had abdominal distension following nutrition and the initial examinations for diagnosis were performed. Figure 1. General appearance of the neonate in operating room

The mother had no underlying illnesses and it was her first pregnancy at age 30. Initial examinations immediately after birth, did not show any problems and they were completely normal. The patient had abdominal distension and abdominal tenderness in physical examinations and the primary diagnosis was considered as acute abdomen due to acute intestinal obstruction. Radiologic examinations of the abdomen showed the presence of free air under the diaphragm (pneumoperitoneum) and the patient was a candidate for surgery with the diagnosis of intestinal perforation due to intestinal obstruction (Figure 2). The patient’s vital signs were blood pressure = 95/58 mmHg and pulse rate = 184 bpm and he was transferred to the operating room whilst he was fully conscious. Following pre-oxygenation, fentanyl and atropine were injected by a dose of 2 μg/kg and 0.10 mg respectively via intravenous access. Anesthesia was induced by sevoflurane (5% to 30% in a gradual decreasing trend) and awake intubation method. Endotracheal intubation was performed by number 2.5 cuffless ETT fixed at 5.5 cm at lip. Correct insertion of the tube was confirmed by auscultation of the lungs and inspection of bilaterally symmetric chest expansion. Atracurium was used at a dose of 0.23 mg/kg for neuromuscular blocking thereafter and anesthesia maintained with oxygen 2 L/min and sevoflurane 3%.

After performing laparotomy and observing the patient's gastrointestinal tract, the surgeon noticed a rupture in the stomach (contrary to the initial diagnosis), and primary gastroraphy was performed (Figure 3). Surgery lasted for an hour. During the operation, the patient's blood pressure was monitored periodically by an 8 cm cuff.

Heart rate and ETCO2 were monitored continuously. Anesthesia was reversed with neostigmine (65 Mcg/kg) and Atropine (0.1 mg) and the patient was extubated and transferred to the recovery room with stable vital signs. Written informed consent was taken from parents for reporting this study. The gastric perforation of the newborn was first described by Siebold in 1825. The condition may happen in three ways: trauma, ischemia, and spontaneous; and the most common cause is gastric rupture caused by insertion of the gastrointestinal tube. Spontaneous gastric rupture is a rare condition in healthy newborns and usually occurs in the first week of birth, especially in preterm infants. There is a possibility of pneumoperitoneum and even cardiac suppression due to the severity of the rupture. Spontaneous linear tears of the stomach in infants can be lethal. Pneumatic rupture of the stomach is probably the most common cause of the gastric tear. However, the etiology of this problem is not clear. Vomiting mechanisms in infants are immature and it can lead to incoordination of the muscles and cause high pressure in the stomach and produce tears in the stomach wall like Boerhaave's syndrome in the esophagus. The prevalence of gastric perforation is much higher in the first seven days of life than the other times. It is a lethal condition, and needs urgent surgical intervention (3, 4).

All airway and ventilation techniques such as mouth-to-mouth ventilation, oxygen therapy by nasal cannula and laryngeal mask airway during cardiopulmonary resuscitation can lead to gastric rupture of neonates (5-7).

The laryngeal mask airway was a revolution in airway management and resuscitation. It needs less skill and training than with either facemask or endotracheal intubation. The use of laryngeal mask as a standard equipment in hospital and other medical settings is increasing. The leak of gases and over inflation of stomach are some of complications of positive pressure ventilation with laryngeal masks. There are some studies that reported massive gastric dilation, gastric rupture, and tension pneumoperitoneum caused by laryngeal mask ventilation, particularly if the position of the airway is not correct and if the inspiratory pressure exceeds than 20 cmH2O (7).

Chest compressions alone, during cardiopulmonary resuscitation can cause gastric rupture, particularly if it is performed too low on the sternum or upper abdomen. Mouth to mouth ventilation or bag-valve mask ventilation seems more likely to cause gastric inflation than in the laryngeal mask airway ventilation. Malalignment of the mask or rescuer's mouth will cause gastric inflation because it prevents gas escaping through the patient's mouth, and high pressures will be transmitted entirely to the esophagus. Therefore using a laryngeal mask airway instead of a face mask to ventilate the lungs during cardiopulmonary resuscitation, possibly reduces the incidence of gastric overinflation (8, 9).

Gastric rupture during resuscitative procedures is usually fatal. There are some cases that have been reported in which the esophagus has inadvertently been intubated resulting in gastric perforation. It should be suspected when intubation is followed by abdominal distension, rigidity and tenderness (10).

In this study it seems that the patient’s prematurity and low birth weight were predisposing factors of gastric rupture. Since the patient had not been under CPR, or ventilation or NG tube insertion, before developing the symptoms, it seems that the gastric rupture was spontaneous in this infant. Awake intubation was done because these patients cannot be considered as NPOs and risk of aspiration is minimum in this method. Also, fluid and electrolyte management were given a high importance in this patient. As in any other conditions, the major anesthetic consideration is vigilance of the anesthesia provider and rigorous monitoring of the patient (11).