The Risk Factors Associated with Congenital Anomalies in Newborns 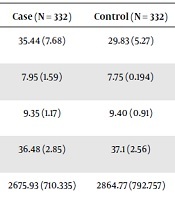 Congenital anomalies are a physical impairment that occurring to baby at birth. About 10% of anomalies are caused by teratogenic effect, including chemicals, viruses, physical agents, and medications.

This study was conducted to determine the risk factors of congenital anomalies in newborns.

332 infants with congenital anomalies (case group) and 332 healthy infants (control group) were compared in this case-control study, which was conducted in Akbar Abadi Hospital from April 2016 to April 2017, on infants who are diagnosed with congenital anomalies, based on a first pediatric examination. The data obtained from these infants were analyzed, based on questionnaires and clinical records.

maternal disease, the history of having child with abnormality, and the history of abortion were the most effective factors in anomalies. In the next step, the consanguineous parents, smoking, the type of delivery, and father’s age were important risk factors. Finally, maternal age and gestational age had significant effect on anomaly.

Despite the improvements in understanding of etiology and pathogenesis of infant anomalies, the congenital anomalies are the leading cause of death in 22% of infants’ anomalies. Health care for such infant anomalies impose a great cost on the government and families (1-3). The prevalence of major congenital anomalies varies among races and according to the exposure to some environmental factors (4). Consanguineous marriages play an important role in the development of congenital anomalies (4-7). Some studies cite that in the same region, the prevalence of anomalies in Muslims is more than the Christians. This is only related to religious beliefs about the Muslims’anti-abortion policies and consanguineous marriages (8).

2% - 3% of infants with anomalies have major structural anomalies at birth, which these are detected in 2% - 3% of them, by the end of the 5th year (1). However, most anomalies are not hereditary, and there is genetic disorder only in a slight part of those with birth defects, who seek for counseling. Also, about 10% of congenital anomalies are caused by teratogenic agents, including: chemicals, viruses (rubella, cytomegalovirus, and toxoplasmosis), environmental factors, physical factors (X-rays), and drugs. Infants whose mothers over consumed drug during pregnancy, were more likely to have congenital anomalies (2).

In addition, some congenital anomalies are associated with the baby sex, birth weight, and parental age, especially the age of mother and fetus (3). Consanguineous marriage increases the incidence of autistic autosomal recessive diseases in infants of these parents (4). The significant effect of some factors, such as the family history of genetic diseases, low birth weight, and premature infant, on congenital anomalies have been indicated in some studies, and the incidence of anomalies are ranging from 0.82% in Arak to 2.3% in India (9, 10).

According to the implemented studies, about 2% - 3% of infants have severe anomalies, a few of which are so problematic that may cause death, but in the rest of them disability and death can be prevented by early diagnosis and treatment (11). However, since it is possible to prevented many congenital anomalies, recognizing and preventing congenital anomalies in societies impose a far less cost compared to their treatment or rehabilitation (4).

This study was conducted to determine the risk factors of congenital anomalies in infants in Akbar Abadi Hospital, Tehran, Iran, in order to provide a basis for genetic counseling and, if possible, prenatal diagnosis in subsequent children and creating a context for future studies.

This case-control study was conducted in Akbar Abadi hospital, Tehran, from April 2016 to

April 2017. To conduct this research, the data were collected from patients who referred to the maternity clinic of Akbar Abadi Hospital, from April 2016 to April 2017. In the current study, congenital anomalies of infants were reviewed based on pediatric examinations. In order to make the similarity between two groups, the control group was selected from the same hospital. The control group was selected from healthy infants at the same time, who were born in the hospital, and 83 healthy infants were randomly selected in each season to participate in the study.

Cases were selected within a year, from 10187 infants. Accordingly, 332 infants with confirmed congenital anomalies were considered as cases group, and they were compared to332 healthy infants as the control group.

The exclusion criteria included: (a) Parental dissatisfaction on participating in the study; (b) inaccessibility of parents. The maternal factors including age and diseases, consanguineous parents, father’s age, the history of abortion in mothers, residence place, mother’s smoking habit, the history of having a child with abnormality, and factors related to the baby, including weight, sex and Apgar score, along with other important points were recorded in the examination of the infants.

The data were collected using a questionnaire, which included infant and parental characteristics and insertion anomalies of the infants. A questionnaire was filled up for each infant, and a result was recorded in the questionnaire for the newly hospitalized infants after the baby was examined by a pediatrician.

This study was conducted within a year. During this study, two groups of case and control were studied, which the case group included 332 infants with abnormality and control group included 332 healthy infants. Also, none of the infants in case group met the exclusion criteria, and all of them were included and analyzed in the current study. Unilateral Undiscerning Testis (UDT), hypospadias, and club-foot were the most common anomalies in premature and term neonates. The prevalence of anomalies were 13.8% for unilateral UDT, 13.5% for hypospadias, 13.5% for club-foot, 11.4% for bilateral UDT, 7.4% for low set ear, 6% congenital hydrocephalus, 3.9% microcephaly, 3/3% down syndrome, 3% cleft lip and cleft palate, and other anomalies were less prevalent. There have been multiple anomalies (at least 3) in 6% of infants. There were also 800 deficits, such as atrial septal defects (ASD), ventricular septal defects (VSD), and patent foramen ovale (PFO) based on echocardiography, and according to the need for cardiac counseling for infants during the first 3 days.

aP value < 0.05 was considered as significance.

aAll variables with P < 0.05 were included in the model (parents’ kinship, the type of delivery, abortion, maternal disease, smoking, the history of child with abnormality, mean of father age, mean of gestational age, mean of maternal age)

Briefly, there was a relationship between consanguineous parents, maternal disease, the type of delivery, abortion history, mothers’ smoking habit, and the history of child with abnormality (P value < 0.05). There was not statistically significant difference between gender of infants, gravidity, place of residence, the season of birth, Apgar, Apgar score in 5 minutes, and gestational age, and they were almost the same (P value > 0.05).

Major anomalies refer to disorders, which if are not corrected or cannot be modified in a timely manner, the normal functioning of the body is impaired or the lifetime of the individual is decreased. The cleft lip, cataract, hydrocephalus, and malignant cell are the major anomalies. In this study, the prevalence of anomalies in Akbar Abadi hospital was estimated 3.2% in one year. The total number of patients with congenital anomalies, reported in other studies, wasranged1.86%, and it was reported 3% - 5% in developed countries, approximately 4.3% in Taiwan, 7.92% for the United Arab Emirates, 2.46% for Oman, 2.7% for Bahrain, and 3.6% for India (12-16). The reported prevalence of congenital anomalies in Iran was 2.3% for Tehran, 1.01% for Gorgan, and 3.76% for Yazd (17-19). These results are partial estimations, since they have only been expressed based on the physical examination of the infants, and the additional anomalies, which are recognized by age or cause death in the fetus, are not considered. In the current study, only 6% of the anomalies were multiple. About two-thirds of congenital anomalies are isolated and located at one point of the body.

According to our findings, the prevalence of congenital anomalies was higher in boys compared to girls, but according to the logistic regression results, there was no significant relationship between the anomaly and gender. This finding was in agreement with other studies (20, 21). There was no relationship between the sex of infants with anomalies and year of birth. A study in Iran reported that the prevalence of anomalies in boys is higher than girls, and it was in agreement with our results (22). Another study (18) reported that infant boys were more affected than girls, but some studies reported that the prevalence of congenital anomalies is not affected by the gender of infant , therefore both genders had similar possibility of having congenital anomalies (19, 23, 24). Also in our results, the gestational age had an effect on anomaly, such that there was an increase in anomaly by decreasing gestational age. This result was in accordance with the results of a study conducted by Mohajer Shirvani et al. (25) in which there were a significant relationship between the age of pregnancy and the length of fetal kidney.

As mentioned above, unilateral UDT, hypospadias, and club-foot were the most common anomalies. In some cases, other studies are in agreement with our findings and, in some cases, they are not. In a study in China, conducted by Ge Sun Zhe-Ming Xu in 2011, the 12-year prevalence of congenital anomalies were examined, and the results showed that, although there was an increased intestinal CHD intake, kidney failure, and hypospadias, the anorectal, poly-ductility, sin-ductility, and hydrocephalus were decreased (32). In a study in Nigeria, conducted by Ekwere et al. in 2011, the most common types of anomalies among 200 types, were respectively gastrointestinal anomalies (30.30%), the central nervous system anomalies (24.25%), and the others (13.5%) (33). There was an outbreak of congenital anomalies in Shari’ati Hospital, Tehran, in 2002 - 2004 by Hamideh Shajari. Among 3840 infants who were included in the study, 118 cases (1.3%) had anomalies. Anomalies were more prevalent in boys and the skeletal system and nervous system anomalies were the most common ones (34).

It was attempted to investigate as many patients as possible. However, we could not find more than 332 patients in a year. On the other hand, this study was performed only on infants who were born in Akbar Abadi Hospital from April 2016 to April 2017. Despite its limitations, this study could examine the effect of several potential risk factors on congenital anomalies.

The results of this study determined the potential risk factors for congenital anomalies in the considered population. It was concluded that maternal age, maternal disease, the type of delivery, history of abortion, father’s age, smoking, history of having child with abnormality, gestational age and consanguineous parents are the potential risk factors of congenital anomalies. In terms of adjusted logistic regression, maternal disease, the history of having child with abnormality, and the history of abortion were the most effective factors in anomalies. In the next step, the consanguineous parents, smoking, the type of delivery, and father’s age were important risk factors. Finally, maternal age and gestational age had significant effect on anomaly. There was no relationship between birth weight, gender and congenital anomalies. However, our study was an observational study, and other studies with larger sample size are needed to investigate exact effect of aforementioned factors.