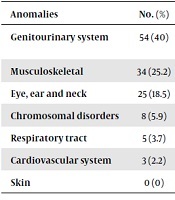 The present case-control study was conducted in the hospitals affiliated to Hamadan University of Medical Sciences for 6 months in 2017. The study targeted all the newborns from birth to hospital discharge. The neonatal cases with congenital anomalies were identified through clinical examination. A report sheet was assigned to a healthy newborn, as a control, per each case of congenital anomalies born on the same day and in the same hospital. Once data was collected, they were statistically analyzed by means of SPSS V. 16 software.

According to the current results, the prevalence of congenital anomalies was 0.85% (8.5 per 1,000 live births). Genitourinary (40%), musculoskeletal (25.2%), eye, ear and neck (18.5%), chromosomal (5.9%), respiratory tract (3.7%) and cardiovascular system (2.2%) were the most common congenital anomalies, respectively. Consanguineous marriage, concomitant use of contraceptive methods and male sex were found to be the most important risk factors for congenital anomalies.

The present study aimed at identifying the various types and prevalence of congenital anomalies in Hamadan province. Regular prenatal examination and early diagnosis for prevention, early intervention and scheduled termination of pregnancy are recommended. Besides, public awareness of the disadvantages of consanguineous marriage and other pertaining risk factors affecting the incidence of congenital anomalies is also recommended.

Congenital anomalies refer to any anatomic birth malformations that are diagnosable in almost 3% - 5% of newborns (1-4). The etiology of congenital anomalies is multifactorial which remains unrecognized in 40% - 60% of birth defects. The observed risk factors for congenital anomalies consisted of 15% for genetic and chromosomal attributes, 10% for environmental exposures and 20% - 25% for the interplay of genetic and environmental factors (5-9). An annual amount of 30,000 - 40,000 disabled and paralyzed infants are born in Iran; the disability of these infants not only does make them suffer from many physical and psychological disorders throughout their life but also causes their families and the government countless psychological and economic problems (10-12). Despite etiologic and pathogenic advancements, about 22% cases of neonatal deaths are caused by major congenital anomalies. Such internal malformations as renal, cardiovascular and pulmonary anomalies may not be identified at birth but later in life (13); that is why the prevalence of congenital anomalies reaches 3% - 4% at exactly 1 years old while it equates 5% - 6% at the age of five (14). Congenital anomalies range from mild to severe defects and are classified into single and multiple body involvement. Severe anomalies are easy to diagnose while the mild ones require more accurate clinical examinations. The significance of mild anomalies is due to the fact that they may be a part of a specific syndrome, whose detection facilitates the diagnosis of the syndrome (15-19). Various outbreaks of anomalies have been proven in different races. Research has shown that nearly 15% of neonatal deaths are attributed to severe anomalies. The prevalence of anomalies in LBW (low birth weight) newborns, preterm infants and both fourth-time mothers and those older than 35 years is respectively 3 times, 4 times and twice as much as the total cases of anomalies at live births. Family medical history, patients’ sex and disease severity affect the recurrence of anomalies in subsequent children. The overall prevalence of congenital anomalies has got a descending trend in different countries (20-22).

The present study intended to determine the risk factors for congenital anomalies of newborns in Hamadan province in order to accentuate the significance of pre- and post-marriage genetic testing so as to prevent births with potential severe malformations through early prenatal diagnosis.

The present case-control study was conducted on the hospitals affiliated with both Hamadan University of Medical Sciences and the Social Security Organization as well as private hospitals in Hamadan for 6 months in 2017. The inclusion criteria targeted all the infants born in the hospitals of Hamadan province whereas exclusion criteria involved Hamadan non-residents and incomplete questionnaires. Case refers to all newborns with congenital anomalies while control denotes infants who were born in the same hospitals and without any clinically observed congenital anomalies. One control was intended per each case with homogeneous neonatal sex, maternal age, and place of residence (city or town). Data collection tool was a standard inventory retrieved from the website (Child Death Care System tab) of Children Department in the Ministry of Health. The questionnaire was composed of 8 sections including demographic information, delivery information, neonatal medical history, and neonatal examination and pertaining anomalies, diagnostic interventions, family medical history, pregnancy history (exposure to risk factors) and maternity lifestyle. The exposure variables used to compare the case and control groups included maternal medications, smoking habit, drug and alcohol abuse, parental consanguineous marriage, history of abortion, history of or exposure to eruptive diseases associated with fever during pregnancy, preterm delivery, maternal underlying diseases, exposure to X-ray or chemicals, surgery during pregnancy, stress, hormonal contraception and infertility therapies. Sampling was carried out using census method. Neonatal cases with congenital anomalies (minor and major) were identified. The sample size encompassed all births with congenital anomalies during the research time. A report sheet was assigned to a healthy newborn, as a control, per each case of congenital anomalies born on the same day and in the same hospital. Data were collected through neonatal physical examination, interviewing the mothers, reviewing medical dossiers and completing the registration form by the interviewer.

To analyze data, we used Independent-sample t-test and chi-square test to assess the associations. Moreover, to control confounding factor, logistic regression was used. A P value less than 0.05 was considered statistically significant. SPSS version 16 was used for analysis.

Congenital anomalies refer to any anatomic defects at birth, which are diagnosed based on clinical examinations on the delivery day by a pediatrician using fetal or neonatal radiography, ultrasonography and echocardiography which are recorded.

Table 1. Comparison of Risk Factors for Congenital Anomalies in the Intended Newbornsa

According to the results of the present study, the most prevalent congenital anomaly belonged to genitourinary system (40%) and the least one was related to cardiovascular system (2.2%). None of newborns had skin anomalies (Table 2).

Table 2. Prevalence of Anomalies in the Intended Newborns

The most common congenital anomaly was related to the genitourinary system (40%), with hypospadias ranking first, while musculoskeletal system (25.2%) scored second, with clubfoot as highly prevalent amongst the observed anomalies. Khoshhal-Rahdar et al. (24) and Alijahan et al. (25) found musculoskeletal anomalies as the most common congenital defects. In the Hosseini et al. (26) study, anomalies of eye, ear and face ranked first followed by nervous system disorders. According to Jalali et al. (23), the most and the least prevalent congenital anomalies were respectively linked to musculoskeletal and genitourinary abnormalities. The contrasting rate of prevalence reported by various studies may be attributed to the significant role of underlying factors in disease development and the basis for the diagnostic methods of congenital anomalies since most inherited defects are mainly recognized on the basis of clinical examinations. Despite precise initial physical examinations by pediatricians, some congenital anomalies were not initially diagnosed due to their specific nature (unobservable at birth) while other defects required radiography and echocardiography.

The present findings showed that the risk of malformed births was 4.5 times higher in parents with consanguineous marriage, with the third-degree marriages (92.5%) ranking first. Alijahan et al. (25) and Kushaki and Zeyghami (31) indicated that parental consanguinity significantly surged the risk of abnormal births to respectively 2.3 and 8.7 time more than other factors. The prevalence of consanguineous marriage ranges from 17 to 31 percent in Iran (31), the differing range of which may contribute to its diverse frequency in different districts of Iran.

Moreover, emergency C-section delivery was the most common risk factor for congenital anomalies amongst various types of delivery. Nevertheless, since the presence of a potential congenital abnormality may necessitate an emergency C-section, they present more association than vaginal delivery; this is in line with the findings of Sarkar et al. (30).

The significant relationship between hormonal contraceptive methods and the risk of congenital anomalies in the intended newborns highlights the importance of healthy fertility care.

Since such variables as parental age, parental occupation and place of residence (city or town) did not significantly correlated with congenital anomalies, they were not recognized as risk factors for anomalies. Parental age, however, was considered as an identified agent for fetal chromosomal disorders; accordingly, most birth cases with Down’s syndrome were prenatally aborted through early diagnostic screening during pregnancy and those born with Down’s syndrome constitute only a little percentage of abnormal cases. This is why maternal age was not found to be a potential risk factor for congenital anomalies.

According to the findings of the present study, such risk factors as acute maternal disease (7.4% vs. 3.3%), maternal drug intake (5.2% vs. 1.5%), family medical history of congenital anomalies (7.4% vs. 3.7%), history of pregnancy problems (3.4% vs. 0.7%) and stressful pregnancy (3% vs. 0%) were apparently observed while insignificantly different, in abnormal births.

Besides, nutritional problems and respiratory distress were most common in the abnormal group that can be assignable to congenital anomalies.

The results of the present study identified various types and prevalence of congenital anomalies in Hamedan province. Regular prenatal examination and early diagnosis are recommended for prevention, early intervention and scheduled termination of pregnancy. Besides, public awareness of the disadvantages of consanguineous marriage and other pertaining risk factors affecting the incidence of congenital anomalies is also recommended.

The current study was approved under the number 9505192938 by the Deputy of Research Technology in the Hamadan University of Medical Sciences. Therefore, the researchers would like to express their genuine gratitude to the venerable deputy who sincerely sponsored the present study.

Copyright © 2020, Journal of Comprehensive Pediatrics. This is an open-access article distributed under the terms of the Creative Commons Attribution-NonCommercial 4.0 International License (http://creativecommons.org/licenses/by-nc/4.0/) which permits copy and redistribute the material just in noncommercial usages, provided the original work is properly cited.
download pdf 103.08 KB Peer Review Comments ( 124.58 KB) Get Permission (article level) Import into EndNote Import into BibTex
Number of Comments: 0