Intranasal Versus Intravenous Naloxone in Opium Poisoning in Children, A Pilot Study 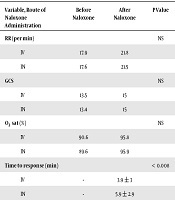 Opioid poisoning is a common and fatal poisoning in children in our country.

This study was designed to compare the effects of intranasal (IN) dribbling with intravenous (IV) injection of naloxone in opioid poisoning in Loghman-Hakim Hospital, Tehran, Iran.

This is a prospective, clinical trial study performed on children between the ages of one to 13 years with opioid poisoning from April 2018 to April 2019 compared to IN naloxone 0.01 mg/kg dribbling versus Intravenous naloxone 0.01 mg/kg injection. Patients with nasal congestion, severe poisoning and co-ingestion were excluded. The main outcomes included GCS, response time, respiratory rate, and O2 saturation. This study was approved by the Ethics Committee of Shahid Beheshti University of Medical Sciences (IR.SBMU.RETECH.REC.1397.258) and was registered with the Iranian Registry of Clinical Trials (www.irct.ir) (IRCT20180226038869N1).

A total of 44 patients (22 IV and 22 IN) with a mean age of 38.2 ± 28.8 months in IV and 36.8 ± 19.7 months in the IN naloxone group, 14 methadone and eight opium poisoning in IV and 13 methadone and nine opium poisoning in the IN group. The male/female ratio was 14/8 in both groups. There were no statistically significant differences between the two groups in RR, GCS, and O2 saturation before naloxone administration. The IV and IN groups had similar average increases in RR, O2 saturation and GCS after naloxone administration. There was a significant difference in the time of response between the two groups (P < 0.008), 3.9 ± 3 minutes in IV group and 5.9 ± 2.9 minutes in the IN group. No complications were observed in this study.

This study showed that Intranasal naloxone is safe, effective, and a well-tolerated needleless method for opioid poisoning in children. Although the time to response was longer in the IN groups, if we add the time needed for IV catheter insertion it seems that the IN route is faster.

Opium poisoning is a common and fatal poisoning in children. Parallel with an increase in production and availability of methadone in Iran, poisoning from this drug has increased (1, 2). The only approved antidote is naloxone and the best route is intravenous, however, this route is difficult and time wasting, mainly in children (3). The IN route is a clinically effective method for a number of medications in adults and pediatrics, including pain control, anxiolysis, and seizure control (sufentanil, midazolam, ketamine, and dexmedetomidine, etc.), with lots of advantages including rapid onset, high plasma bioavailability, direct transport to CNS across the high vascularization of the nasal mucosa, bypass the first pass metabolism effect, needleless, decreased pain and anxiety for IV catheterization, inexpensive, more tolerable and easy to deliver, and saves valuable staff time (4, 5). In addition, intravenous access in children may be difficult mainly in infants and critically ill patients for inexperienced providers (5). There were two types of administration of IN drugs explained in the literature: drop instillation or by a mucosal atomizer device (MAD) with better bioavailability, however, unfortunately we don’t have Narcan Nasal Spray in our country (6). Nasal discomfort, vomiting and unpredictable dose of IN delivery are the common side effects (3, 7). There are several reports that intranasal naloxone can be safely administered for the reversal of opioid intoxication in the pre-hospital and hospital settings in adults (4).

Outcomes included changes in level of consciousness (Pediatrics GCS), time to response, respiratory rate, O2 saturation before and after naloxone administration, side-effects, and need for re-administration.

A total of 44 patients (22 IV and 22 IN) were enrolled in the study. The mean age was 38.2 ± 28.8 months in the IV naloxone group and 36.8 ± 19.7 months in the IN naloxone group. There was 14 methadone and eight opium poisoning in the IV group and 13 methadone and nine opium poisoning in IN group, all of them were unintentional via oral ingestion. The male/female ratio was 14/8 in both of our study groups (IV and IN). Age (P = 0.85), gender (P = 1), opioid agent (opium and methadone) (P = 0.23); route of poisoning before naloxone administration between the two groups were not significantly different.

Mean respiratory rate increment before and after intervention was 3.68 ± 3.04 in the IV group and 4.13 ± 2.29 in the IN group, was statistically not significant (P = 0.74). There were no statistically significant differences between the two groups in RR, GCS and O2 saturation before naloxone administration (P = 0.74, P = 0.91, P = 0.22). The IV and IN groups had similar average increases in O2 saturation and GCS after naloxone administration (Table 1).

In total, clinical response to IN naloxone was observed in all of our patients. There was a significant difference in the time of response between IN and IV groups (P < 0.008), 3.9 ± 3 minutes in IV group and 5.9 ± 2.9 minutes in the IN group. Nine patients (41%) in the IV and 20 (91%) in the IN group required further doses of naloxone, which had a statistically significant difference (P < 0.001).

The IV and IN groups had similar average increases in O2 Saturation and GCS after naloxone administration.

Table 1. Respiratory Rate, O2 Saturation, and GCS in Opioid Poisoning in Patients Before and After Naloxone Administrationa

aNone of the IN naloxone group was reported to have vomited or any other complications after IN naloxone dribbling.

Although we have not found any related article about IN Naloxone in children, there are some articles about the IN route in children. Warrington et al., reported that the IN route is a quick, painless alternative to more invasive routes for pediatric pain management, with similar time to the clinical effect compared to the intravenous route, while minimizing anxiety in both patients and their parents (8). AlSarheed reports the effectiveness of intranasal (IN) sedatives to achieve conscious sedation during dental procedures amongst children and he found that the onset of action for IN midazolam was five to 15 minutes, which is longer than IV; their results about onset was similar to our results (9). Krieter et al., showed the effectiveness of the Aptar Unit-Dose device IN naloxone and that intranasal naloxone resulted in plasma concentrations greater than those observed following the intramuscular dose (10). Madah-Amiri et al., showed successful reversals of opioid overdose with naloxone sprays, however, their research was in adults and Naloxone nasal spray, nonetheless we used IN naloxone dribbling in children (11).

The result of our study regarding RR and GCS were similar to Sabzeghabaee’s result in adults (4). Our study showed that among opioid (opium and methadone) poisoned children, IN naloxone is effective, however, with a short time delay in comparison to IV naloxone. Although our results showed no significant difference between the two groups after naloxone administration in the level of consciousness and respiratory rate increment, O2 Saturation was higher in patients administered IN naloxone than those in the IV group.

In our study response time in the IV and IN group were 3.9 ± 3 and 5.9 ± 2.9 minutes respectively, however, McDermott et al., reported that the mean time taken for the IN and IV group was 87.1 seconds and 178.2 seconds, respectively, which may be due to the fact that they added the time needed for IV catheterization (14).

Disadvantages are not extensive; including nasal irritation, restricted delivery volume (max; 1 mL per nostril), and nausea; we had no complications in our study (15).

In addition, the use of this needleless route is effective in the treatment and minimizing the risk of blood-borne exposures to EMS personnel, mainly in addicted patients (16, 17).

This study showed that the administration of intranasal naloxone is a safe, effective, and well tolerated needleless method for treatment of opioid poisoning in children. Intranasal naloxone has been shown to have many advantages mainly in children both in prehospital, EMS setting, and hospital setting. Although the time to response was longer in the IN groups, if we add the time needed for the IV catheter insertion it seems that the IN route is faster. There are also some limitations to our study, we excluded young infants, critically ill patients, and our study population was not large. Authors recommended similar studies with a higher naloxone dose, large population number, study comparing intranasal and IM or SQ routes, use of other forms of intra nasal medications, and multicenter studies for future researches.

The authors would like to thank the Clinical Research Development Unit (CRDU) of Loghman Hakim Hospital, Shahid Beheshti University of Medical Sciences, Tehran, Iran for their support, cooperation, and assistance throughout the study.