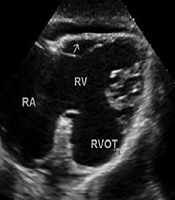 Being known as a rare genetic disorder, Arrhythmogenic Right Ventricular Dysplasia (ARVD) occurs due to the replacement of right ventricular myocardium with fibrofatty tis-sue that comes with ventricular arrhythmias and sudden cardiac death (SCD). The prevalence of ARVD is estimated between 1:2000 and 1:5000. It can lead to right ventricle (RV) volume increment and RV ejection fraction decrement. The ARVD condition is an essential trigger of ventricular arrhythmias in children and young adults, possibly leading to palpation, syncope, and even heart failure symptoms in advanced stages (1). The diagnosis is based on major and minor standardized task force criteria, a combination of clinical, morphological, and electrocardiographic aspects as detailed by the European Society of Cardiology (ESC) and the World Heart Federation (2). Tricuspid regurgitation (TR) and left ventricle dysfunction may occur due to right ventricle structural changes that are associated with worse prognosis (3). In this paper, we aim to cast light on clinical di-agnostic and treatment methods of the unique case of a nine-year-old boy diagnosed with ARVD with free TR and LV dysfunction.

A nine-year-old boy was presented with generalized edema, ascites, and palpitation for the last two weeks. The patient was not febrile and did not have any history of chest pain, syncope, or dyspnea. Before this episode, he had been complaining of cough and fever, which recovered after taking antibiotics.

He had no significant family medical history. Holosystolic murmur of tricuspid regurgitation was detected on cardiac auscultation besides the presence of shifting dullness on abdominal examination. There were no other abnormalities on examination. The clinical signs and symptoms were in favor of chronic right-sided heart failure.

Moreover, 24-hour ECG Holter revealed normal diurnal variation with minimum and maximum HR of 48 and 174 b/min, respectively. Moreover, it showed PACs whole tracing. The QTc was 495 ms. Genetic analysis was not done because all other criteria were fulfilled.

Prolonged episodes of sinus bradycardia were noted at each hospitalization. Overall, the patient met the criteria for ARVD. After the diagnosis, the patient received digoxin, furosemide, captopril, Aldactone, anticoagulant and antiplatelet agents (warfarin, ASA). Anti-arrhythmic agent (Amiodarone) was added to the treatment regimen since the inial event of atrial fibrillation.

Arrhythmogenic Right Ventricular Dysplasia (ARVD) primarily affects the right ventricle. Several major and minor criteria have been defined for the diagnosis of ARVD, including RV systolic dysfunction with the preservation of LV function on non-invasive cardiac imaging. The LV involvement may appear through the dysplastic process, hence leading to biventricular pump failure that is a significant risk predictor for sudden cardiac death (4).

There are many conflicts in LV involvement, including abnormalities of the LV wall motion, systolic dysfunction, and dilatation of the LV. In addition, atrial arrhythmias are associated with LV and RV involvement, especially arterial fibrillation. The prevalence of arterial arrhythmia in AVRD patients is about 14% that tricuspid regurgitation and RV dilation are the most important predicting factors; they appear to be suggestive for disease severity.

Tricuspid regurgitation (TR) is considered to be secondary to right-sided heart disease. The RV and right atrial (RA) remodeling may result in the presentation of TR in these patients. It may be conducive to aggravate heart failure by both RV filling pressure increment and RV stroke volume decrement (5). Our case was a nine-year-old boy whose AVRD was diagnosed based on epsilon wave and inverted T wave in V1 - V3 on ECG, RVOT aneurysm, RV EF of < 40% on MRI, PAC of more than 1000 on Holter, and RV FAC of < 40% on echocardiography. Free tricuspid and LV dysfunction were also reported in echocardiography. He also developed AF arrhythmia. To the best of our knowledge, this is the first AVRD case with free TR and LV dysfunction.