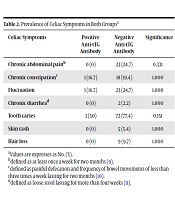 The association of the celiac disease with attention deficit hyperactivity disorder (ADHD) is unclear.

The current study aimed to examine this relationship and the prevalence of the celiac disease in ADHD patients.

From 2016 to 2018, we tested 99 patients aged 4 to 18 years with ADHD diagnosed with clinical interviews for serum IgA and anti-tissue transglutaminase (anti-tTG) antibody for the diagnosis of celiac disease.

There was no IgA deficiency in our patients. The prevalence of positive anti-tTG antibody-IgA test was 6.06%, all in boys. The ADHD children with positive test results were significantly heavier and more well-nourished. There was no association between ADHD severity serum anti-tTG antibody positivity.

The prevalence of celiac serology was higher in ADHD children than in the general population. Among all symptoms of celiac disease and ADHD, only was body mass index significantly higher in patients with positive serology.

Attention deficit hyperactivity disorder (ADHD) is a common psychiatric disorder in children and adolescents. According to DSM-IV, it is the persistent pattern of inattentiveness and/or hyperactivity-impulsivity that affects daily functions. There are three subtypes mainly including inattentiveness, hyperactive-impulsive, and combined. The prevalence of ADHD is 5.29% among children and adolescents up to 18-years-old (1) and it is 10.1% in Shiraz, Iran (2).

Celiac disease (CD) is an enteropathy with malabsorption of food, which is stimulated by dietary gluten and the immune system. Foods containing gluten like wheat and rye may induce the disease. The immune system invades the small intestine and causes it to become flat with limited ability to absorb food (3). Celiac disease is defined as an infantile disease as gluten is introduced to the enteric system but the symptoms show up at the age of 10 - 40. The symptoms vary from diarrhea, abdominal pain, vomiting, failure to thrive, anorexia, to weight loss (4). The anti- tissue Transglutaminase immunoglobulin A (anti-tTG immunoglobulin) level was obtained as 2% in school-aged children in Iran and the prevalence of celiac biopsy was 0.6%, based on a sample size of 1500 cases (5). Other symptoms include gluten ataxia, epilepsy, seizure, peripheral neuropathy, inflammatory myopathy, headache, and gluten encephalopathy as neurological symptoms and anxiety disorders, depressive and mood disorders, attention deficit hyperactivity disorders, autism spectrum disorders, and schizophrenia as psychological symptoms (6). The serologic diagnosis of CD is possible through anti-transglutaminase (anti-tTG) antibody and anti-endomysial antibody, which are sensitive markers.

This study aimed to examine the rate of ADHD in CD.

This cross-sectional study recruited a convenience sample of children from the Clinic of Child and Adolescent Psychiatry, affiliated to the Shiraz University of Medical Sciences, Shiraz, Iran. Out of 160 patients, only agreed 100 patients run the tests. All the patients were clinically diagnosed with ADHD at the psychiatric clinic of Imam Reza in 2016 - 2017.

An 18-item checklist for DSM-IV ADHD diagnostic criteria was used with a four-point scale. The response to each question was scored, as follows: (0) as never, (1) as seldom, (2) as sometimes, (3) as often or always (7). It was used to determine the severity of ADHD symptoms. The total score of inattentive items and the score of hyperactivity-impulsivity represented the ADHD severity.

This questionnaire includes the domains of emotional, conduct, hyperactive problems, peer and prosocial behaviors. In the current study, we used only “hyperactive problems” scores for analysis. Some items of the hyperactivity domain included restlessness and overactivity, constantly fidgeting or squirming, easily distracted and concentration wanders, thinking things out before acting and sees seeing tasks through to the end. The total score of these five questions is categorized as follows: the score of 0 - 5 is considered normal, 6 is borderline, and 7 - 10 is abnormal (8).

Only gave 100 participants their consent to perform blood tests for IgA level and anti-tTG IgA antibody. Among them, one patient was excluded because of the exclusion criteria defined as autoimmune diseases such as thyroid disease, diabetes, alopecia areata, and neurological disease such as seizure. Finally, the study was done with 99 children clinically diagnosed with ADHD aged 4 - 18 years.

Five milliliters of blood was taken from all participants and stored at -80°C for examination. All samples underwent the IgA level antibody assay to find out IgA-negative seropositive cases. The IgA level was measured by indirect immunofluorescent.

In the next step, for the definite diagnosis of celiac disease, a small bowel biopsy was taken. In the current study, only gave one patient consent for it and others did not provide consent for endoscopy.

All the cases were informed completely about the whole study process. Written informed consent for the study, blood tests, and endoscopy was provided by the patients and/or parents. This study was approved by the Ethics Committee of the Shiraz University of Medical Sciences.

Data were analyzed by SPSS version 19 for Windows. The Mann-Whitney and Fisher exact tests were used to analyze the data. An application named Med-calc was used to determine the difference in the prevalence of the celiac disease in the ADHD group. A P value of less than 0.05 was considered significant.

A total of 99 children aged 4 - 18 years with ADHD clinical diagnosis referring to the clinic were screened for serum levels of IgA and anti-tTG antibodies. All the cases were IgA-positive. Therefore, none of the cases had IgA deficiency.

The prevalence of positive celiac serology was 6.06% in the ADHD group in our study while the prevalence of celiac serology positivity was 2% in the normal population of Shiraz with a sample of 1500 cases (5). We compared the prevalence rates in these groups using the Med-calc application and the chi-square test. The difference in prevalence between the two groups was 4.060%. The chi-square test was run and showed that with the test statistic of 5.234 and the 95% confidence interval of -0.693 to 8.813, the P value was 0.022. It showed a significant difference between the two groups; that is the prevalence of anti-tTG antibody positivity was significantly more in ADHD children than in the general population.

Among these 6 cases that had positive tests, only one patient gave consent for a biopsy. The pathology was negative for celiac disease.

Table 2. Prevalence of Celiac Symptoms in Both Groupsa

bdefined as at least once a week for two months (9).

cdefined as painful defecation and frequency of bowel movements of less than three times a week lasting for two months (10).

ddefined as loose stool lasting for more than four weeks (11).

The 18-item ADHD checklist was compared between the two groups, as shown in Table 3 (7). In this questionnaire, there was a question asking about any other autoimmune disease for exclusion. The total score of the first nine questions was considered as the inattention score. The total score of questions 10 to 18 showed the hyperactivity score. The mean inattention score was 18.3 ± 5.04 in the positive anti-tTG immunoglobulin group while it was 13.97 ± 5.79 for the negative test group (P = 0.077). The mean hyperactivity score was 17.83 ± 5.84 in serum-positive ADHD children while it was 14.49 ± 6.87 for ADHD children with negative serum (P = 0.366).

The SDQ questionnaire data analysis showed that the total scores of hyperactive items were more than 6 in both positive and negative anti-tTG antibody ADHD children, which were abnormal. However, there was no difference between the two groups (P = 0.738). The mean scores were 7.33 ± 3.204 for the positive test group and 7.34 ± 2.204 for the negative test group.

Celiac disease is a gluten sensitivity disorder with multiple symptoms, the commonest of which are abdominal pain and constipation. Sometimes, it is associated with other problems like diabetes, skin rashes, thyroid disease, Down syndrome, and neurological problems (12). Slim et al. found out an association between celiac disease and some mental diseases like depression and eating disorder (13).

Some studies showed that some kinds of food can contribute to food allergy, which, in turn, can cause immune dysregulations and cell-mediated hypersensitivity, leading to chronic T cell inflammation. It may also cause neurologic inflammation and possibly ADHD. However, it is unclear whether ADHD has an immunologic basis and it is controversial if it has any association with other atopic diseases. They both seem to remit with age. Therefore, it may be a coincidence of the relationship between them (14). Repo et al. found out that in some patients with anti-tTG immunoglobulin positivity, there was anemia as a symptom before villus damage.

Therefore, it is possible that ADHD symptoms are present in patients with positive tTG antibody (15).

A study suggested that celiac disease is over presented in ADHD patients and a gluten-free diet can improve the symptoms (16). In a systemic review by Sethi and Hughs, they reviewed all studies published in this subject. Although there were many issues with some articles, they proposed not to screen ADHD patients for celiac disease with no additional symptoms (17). Dehghani et al. found a 2% positivity of anti-tTG antibody in the general population of Shiraz (5), while our study found a 6% rate. Therefore, the prevalence of serology positivity for celiac disease was higher among ADHD children. As Helmet Neiderhofer and we concluded the higher serology positivity for celiac among ADHD children and both of our samples are small. We do not know have no idea if other factors likesuch as different gene expressions, races, regions, and diets could contributed.

Cortese and Tessari, concluded that ADHD had a significant association with obesity and suggested that abnormal eating patterns may be associated with ADHD (18). In the current study, all cases with positive tests seemed to be better nourished and gain better weight despite celiac disease presentation. It could be possible that the symptoms may appear later in ADHD children or that the anti-tTG antibody can exaggerate the link between ADHD and obesity with an unknown mechanism.

As the severity of ADHD in both positive and negative anti-tTG antibody groups was the same, it is useless to look for the detection of celiac disease among patients with severe ADHD symptoms. As we did not conduct endoscopy due to the lack of patients’ consent, we did not find the true prevalence of the celiac disease among ADHD children. Celiac screening tests are acceptable for ADHD patients as the prevalence of anti-tTG antibody is higher among these patients than in the general population. Due to the low educational status of our society, we could not have a larger sample and do endoscopy for diagnosis. We recommend obtaining comprehensive results by conducting studies in larger or multi-center samples.

The present article was extracted from a thesis written by Maryam Barkhordarian financially supported by the Shiraz University of Medical Sciences (grant no. 12337).

Copyright © 2019, Journal of Comprehensive Pediatrics. This is an open-access article distributed under the terms of the Creative Commons Attribution-NonCommercial 4.0 International License (http://creativecommons.org/licenses/by-nc/4.0/) which permits copy and redistribute the material just in noncommercial usages, provided the original work is properly cited.
download pdf 123.59 KB Peer Review Comments ( 125.47 KB) Get Permission (article level) Import into EndNote Import into BibTex
Number of Comments: 0