Infectious Causes and Associated Factors of Mortality in Pediatric Patients: Letter to Editor 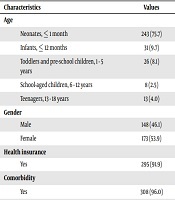 Although millennium development goal 4 (MDG4) calls for an end to preventable child deaths, child mortality remains a problem in many nations, and millions of children are still dying due to preventable causes (1, 2). Likewise, analyzing child mortality, as a basic indicator of health and development of countries, can help health policymakers, health caregivers, and researchers to prioritize funding, improve interventional activities, revise medical services, and increase survival (3). On the other hand, based on evidence, infectious diseases are the most important causes of death in children, especially younger than five-year-old children (4, 5). Therefore, the current study was conducted to explore deaths caused by infectious and parasitic diseases and predicting factors among patients ≤ 18 years admitted to Imam Reza Hospital (IRH) for five years from 2011 to 2016.

The study setting was Imam Reza Hospital (IRH), located in the north of Kermanshah City. In this retrospective descriptive-analytical study, all deaths caused by infectious and parasitic diseases were explored for data related to the study objectives for five years from April 2011 to March 2016. The inclusion criteria were the age of ≤ 18 years and adequate information. The cases with incomplete personal or medical information and deaths before medical services in IRH were excluded.

Data were collected by two nurses who well trained for data gathering using an open-ended questionnaire developed based on the study objectives. The questionnaire was evaluated and approved based on expert opinions comprising a statistician and an internal specialist medical doctor. Demographic characteristics (e.g., age and sex), medical histories (e.g., admitted ward), and the cause of death were collected.

Data analysis was performed using Statistical Package for Social Sciences (SPSS) software (version 22.0; IBM Corporation, Chicago, USA). Qualitative/categorical variables were expressed as frequencies and percentages. The chi-square test was used to assess any association between the causes of death and explanatory factors such as age, gender, and comorbidity. A probability value (P value) of less than 0.05 was considered statistically significant.

The total number of recorded deaths was 1,113 between 2011 and 2016. The most frequent causes of in-hospital child mortality were respiratory system diseases (34%), infectious diseases (28.8), diseases of the blood (13%), diseases of the circulatory system (5.6%), congenital malformations (4.2%), trauma (2.9%), and neoplasms (1.3%). Indeed, 321 deaths (28.8% of the total) were caused by infectious and parasitic diseases. These results are consistent with the findings by Sankaran et al. (6) and Lawn et al. (7), who showed that infectious and parasitic diseases were the leading causes of child mortality. Infectious and parasitic diseases being on the top of mortality causes are concerning and necessitates serious attention. Most deaths were among neonates (75.7%) and females (53.9%). This is in line with the results of previous studies. Similarly, Rabbani et al. (8) and Liu et al. (9) showed that child mortality mostly occurred in the neonatal period. Nowadays, child mortality is shifting to the time of birth; thus, we need advances in perinatal and neonatal care to reduce neonatal mortality rates.

About 96.0% of cases were suffering from at least one comorbidity. Preterm birth and hyaline membrane disease (HMD) were the most common comorbidities, accounting for 34.7% and 18.2% of cases, respectively. The most frequently occupied hospital wards by participants were neonatal ICU (74.1%) and pediatric ICU (20.2%). Similarly, previous publications reported significant mortality rates in NICUs (6, 10). About 91.9% of the cases had been supported by health insurance (Table 1).

The study demonstrated that the most frequent causes of in-hospital child mortality were sepsis (82.2%) and septic shock (12.5%). Previous studies conducted by Liu et al. (4) and Alijani Ranani et al. (11) showed that sepsis was the most common cause of pediatric deaths. Age was significantly associated with the causes of death (P value = 0.001). Deaths due to sepsis and septic shock were more common in neonates, while pneumonia was the main cause of death in toddlers and pre-school children.

A major limitation of this study was the poor documentation of medical information. To face this limitation, we obtained the data from both paperwork records and electronic medical records. In addition, the lack of detailed patients’ information made it difficult to assess the associated factors.

We would like to thank the Kermanshah University of Medical Sciences and Kermanshah Imam Reza Hospital (Center for Development of Clinical Research) for funding this project.