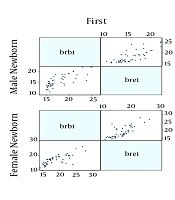 This descriptive-analytical study was conducted on the icteric term and late preterm neonates in Sabzevar, Iran between Oct 30, 2016, and Aug 7, 2018. Within 24 hours of birth, the TcB and then TSB of the neonates were measured before and after phototherapy. The TcB was performed using BiliCheck (KJ-8000 Transcutaneous Jaundice Meter) during phototherapy, at the forehead between the two eyebrows and the middle part of the sternum which were covered by a white 3 × 3 cm gauze.

200 neonates were eligible, the bilirubin level of 50.5% of male infants were ranging from 15 to 18 mg/dL of serum. The correlation for serological-transcutaneous frontal tests was 0.74, 0.82, 0.76, and 0.55 for the first to the fourth day, respectively, versus to 0.71, 0.91, 92 0, and 0.69 for the mentioned days for serological-transcutaneous sternal tests. Based on Bland-Altman and intraclass correlation coefficient (ICC) methods for four days; although the correlation between the two methods is high on the first day in both areas, the value of reduction is greater on day four in the frontal area.

Our findings revealed that the covering of sternal and frontal areas does not affect the correlation between the TcB and TSB methods. Also, TcB in the absence of TSB could be a good alternative in order to measure the level of bilirubin.

Jaundice is one of the most common problems in the neonatal period and is the clinical manifestation of hyperbilirubinemia (1). In healthy subjects, the concentration of bilirubin in blood plasma is low (< 17 μmol/L). However, this increased in those with jaundice (> 30 μmol/L). Concentrations of bilirubin in infants increase immediately after birth due to high turnover of hemoglobin, which the body is unable to eliminate in the short run (2). Jaundice occurs in the first week of life in approximately 60% of the term and 80% of preterm infants and is one of the main reasons for the hospital referral during the first month after birth (3). Most of the cases are physiologic, but in the case of pathologic jaundice, if not treated, it can lead to serious disorders such as impaired development of the central nervous system (neurotoxicity or kernicterus) (4).

Predisposing risk factors of pathological jaundice include infection or trauma at birth, prematurity or polycythemia and genetic factors (5). Total serum bilirubin measurement (TSB) is the gold standard method for bilirubin measurement. However, since this method is aggressive, painful, and in need of skill, transcutaneous bilirubin measurement (TcB) can be used as an alternative to TSB (6). Transcutaneous bilirubin measurement is a non-invasive, quick and easy method that measures the bilirubin level through the skin and subcutaneous tissues (7, 8). This method predominantly indicates bilirubin in extravascular spaces and is likely to be influenced by skin pigmentation and thickening. Conversely, TSB reflects intravascular bilirubin concentration (9) Although the TcB measurement provides accurate estimates, no correlation was discerned between TcB and TSB during phototherapy; BiliChek and JM-103 bilirubinometers significantly elevate TSB levels in dark-skinned neonates and may lead to unnecessary or extra treatments (10).

The aim of this study was to compare serum bilirubin level with two measurement methods of TcB and TSB after covering the frontal and sternal area of the infants.

This descriptive-analytical study was conducted to compare the accuracy of the reported serum bilirubin level of neonates under phototherapy with two methods of TSB and TcB.

The study population consisted of eligible neonates admitted to the neonatal ward of Vasei Hospital in Sabzevar, Iran, between Oct 30, 2016 and Aug 7, 2018. The convenience sampling method was performed. The icteric term and late preterm neonates with a total bilirubin levels above 15 mg/dL and gestational age of more than 34 weeks and weight of more than 2200 grams were enrolled in this study in their first 96 hours of life, and those with diseases other than jaundice, the need for exchange transfusion due to high hyperbilirubinemia or direct hyperbilirubinemia were excluded. The informed consent was obtained from all parents whose newborn was admitted to this study. This research was approved by the Ethics Committee of Sabzevar University of Medical Sciences with the code of (IR.MEDSAB.REC.1394.75).

During the first 4 days of birth, the TcB and then TSB of the neonates were measured. The neonates with hyperbilirubinemia (bilirubin > than 15 mg/dL) underwent phototherapy. Again, after 12 to 24 hours of phototherapy, as before, first TcB and then TSB were measured. Measurements of TcB and TSB were carried out with two hours’ interval. Measurement of TcB was performed using BiliCheck KJ-8000 Transcutaneous Jaundice Meter, made by Xuzhou Kejian High-Tech Co., Ltd with product registration number of YZB/SU0372/2007 at the forehead between the two eyebrows and the middle part of the sternum. The calibration function of the device is auto and the calibration screen display; “00.0” or “00.1” for “00”. Measuring TSB was performed by a clinical laboratory method using a semi-automated biochemical analyzer on a blood sample taken from the neonatal heel. Infants were placed with a distance of about 20 - 25 cm in the phototherapy devices (made by NeoMedLight® Company), the 8 Tumble branded Tucson lamps (TL 20W/52 bulbs) with wavelengths of 425 - 475 nm, for 24 hours a day for four consecutive days. In addition to shielding the eyes and the genital area, in order to prevent the injury during phototherapy, the sternum and frontal areas were also covered by a white 3 × 3 cm Gauze. All measurements of TcB and TSB were performed by a trained nurse who had working experience in the neonatal department. For each patient, the data on both TcB and TSB, before and after phototherapy, as well as the date and time of the measurements were recorded in an Excel chart. The mean levels of bilirubin of the sternum and frontal areas were recorded as TcB value at each measurement.

Figure 1. The correlation between the two serological (TSB) and transcutaneous (TcB) test in the frontal area, separated by male and female from the day one to four of birth

Figure 2. The correlation between the two serological (TSB) and transcutaneous (TcB) test in the sternal area, separated by male and female from the day one to four of birth

Figure 3 the correlation of the serological-transcutaneous frontal and sternal tests with the Bland-Altman method during four days; although the correlation between the two methods is high on the first day in both areas, the value of reduction is greater on the fourth day in the frontal area.

Figure 3. The correlation of the serological-transcutaneous frontal and sternal tests with the Bland-Altman method during four days

Table 2. Correlation Between Serological and Transcutaneous Methods in Frontal and Sternal Area

In the study by Mahajan et al. (17), the correlation between the two methods for the uncovered sternal area was reported r = 0.90, which is more than the value of correlation for the corresponding area in our study. But in studies conducted by Taylor et al. (18) and Tan et al. (14), the correlation for this area was r = 0.78 and 0.60, respectively, which is close to that of our study. Our study also found that the TcB method overestimated the serum bilirubin levels compared to TSB. These results are consistent with the results of the studies conducted by Greco et al. (19) and Murli et al. (20). This can be due to the TcB method standard and tool used for the measurement.

Considering the TcB test has good diagnostic accuracy and is a reliable tool to assess bilirubin for the screening of neonatal jaundice, it can replace the TSB test to reduce repeated blood sampling. Since this is the first study carried out in term neonates using the TcB test with covering sternum and frontal areas, additional data needs to be collected to verify our findings, so further studies are recommended with higher sample size and using a different type of Bilicheck.

One of the major limitations of our study was using one type of Bilicheck instead of two or three versions and also that it was not the newest one. Moreover, sample size was not enough to statistically analyze the difference between extreme premature and premature infants. On the other hand, the main strength of our study is having a new method by covering sternum and frontal that was not applied by other studies.

Words of thanks are offered to the Clinical Research Development Unit of Vasei Hospital, Sabzevar University of Medical Sciences for their assistance in this article.