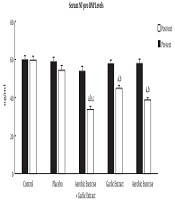 A total of 50 male obese hypertensive patients with a mean age of 53 ± 7.6 years were recruited in this study. They were randomly assigned to five groups, including aerobic exercise, garlic extract, aerobic exercise + garlic extract, placebo, and control. The experimental groups were subjected to eight weeks of aerobic exercise (three sessions per week, each session for 35 - 60 min with a maximum heart rate of 50% - 70%) and/or garlic extract supplement (6 g daily). Blood samples were collected before interventions and 48 h after the last exercise session. Statistical analysis of data was performed by dependent t-test and Analysis of Covariance (ANCOVA).

It seems that both aerobic exercise and garlic extract are able to decrease obesity and hypertension. However, their simultaneous use has no additional effects on hypertension control although it influences the body composition and natriuretic peptides.

The prevalence of overweight and obesity has doubled worldwide since 1980 so that approximately one-third of the global population is ranked as obese or overweight (1). Obesity negatively affects almost all physiologic functions of the body and is a significant threat for public health. Obesity increases the risk of numerous diseases such as diabetes (2), cardiovascular diseases (1, 2), different cancers (3), and musculoskeletal disorders (4), all of which have negative effects on the quality of life, efficiency, and healthcare costs. The risk of cardiovascular diseases is higher in overweight people, and physical activity is considered a supplement to obesity treatment regimen and cardiovascular system health (5). Maintaining systolic blood pressure at about 140 mmHg reduces stroke by 28% - 44% and ischemic heart disease by 20% - 35% depending on the patient’s age. Lifestyle adjustment, including exercise, weight loss, and reduced sodium intake play a key role in controlling systolic blood pressure (6). In addition to the blood circulation, the heart acts as an endocrine gland and secrets natriuretic peptides. Natriuretic peptides include atrial natriuretic peptide (ANP) and brain natriuretic peptide (BNP), the important factors for the diagnosis of cardiac disorders and diseases associated with them (7). ANP is seen as storage granules in mammalian atrial myocardial cells in a 28-amino acid sequence synthesized from a polypeptide. BNP with a 32-amino acid sequence is secreted from the Purkinje cells and heart ventricles (8). Increased ANP secretion is considered an important neutralizing mechanism that excretes sodium and increases vascular expansion by inhibiting the secretion of renin-angiotensin-aldosterone and sympathetic nerve. BNP is released as a result of pressure on the walls as well as ventricular dilation and is disintegrated into active (BNP) and passive (NT-pro BNP) hormones. The plasma half-life of BNP is only 20 min, while that of the NT-pro BNP is about 60 - 120 min. BNP and NT-pro BNP reduce blood pressure by increasing glomerular filtration and sodium reabsorption (9). Studies have shown an association between ANP and BNP and diseases such as congestive heart failure, stage 1 hypertension, myocardial infarction, nephrotic syndrome, ventricular fibrillation, and coronary artery occlusion (10). ANP and BNP are secreted from the heart continually, but the amount of secretion varies in response to different stimuli, and various factors are involved in their synthesis control and secretion. It has been shown that atrial wall stretch is the most important stimulus for the secretion of cardiac hormones (11). Further, endothelin stimulates ANP secretion, and inhibition of endothelin receptor reduces its response to hypoxic conditions (12). Cardiac hormones play a pivotal role in the regulation of blood pressure and volume (13). Yet, their concentration is variable in different physiologic conditions. Sport activity, a non-pharmaceutic intervention for prevention and even improvement of cardiovascular diseases such as blood pressure (5), is able to change the levels of natriuretic peptides. Pirooz et al. (14) reported ANP reduction and lack of NT-pro BNP change following eight weeks of endurance exercise in the healthy young participants, while endurance and combined endurance and resistance activities did not change the levels of these peptides. Moreover, Bordbar et al. (15) indicated NT-pro BNP level was unchanged after eight weeks of endurance exercise in the healthy adults, but it was followed by a significant increase after endurance exercise. In addition, Beltran Valls et al. (16) reported an unchanged NT-pro BNP level after a 12-week endurance exercise program in the elderly. Furthermore, Berent et al. (17) found NT-pro BNP level reduced after four weeks of aerobic exercise in the cardiac patients. Although a number of studies have investigated the chronic effects of sports activities on natriuretic peptides, the changes of these peptides have not been explored owing to adaptability to aerobic exercise in blood pressure conditions.

Garlic is a plant that has been widely used for the treatment of illnesses associated with aging. It has potent antioxidant properties (18), reduces blood glucose, blood lipid, blood pressure, and blood concentration, and prevents atherosclerosis and cardiovascular diseases (19). Garlic affects the vessels and increases blood flow to arteries and capillaries (20). The beneficial effects of sports activities and consumption of garlic supplement on cardiovascular health seem to be associated with cardiac hormone changes.

Therefore, the present study was aimed to investigate the effect of an eight-week aerobic exercise program and use of garlic extract on serum ANP and BNP levels in obese hypertensive patients.

In this quasi-experimental study, 50 male obese hypertensive patients, aged 53 ± 7.6 years, were recruited voluntarily from region three of Tehran, Iran. The participants had no history of tobacco and alcohol consumption as well as other diseases. Obesity was diagnosed by body mass index (BMI) formula and BMI ≥ 30 was considered obesity.

In this quasi-experimental study, 50 male obese hypertensive patients, aged 53 ± 7.6 years, were recruited. The participants had no history of tobacco and alcohol consumption as well as other diseases. Obesity was diagnosed by body mass index (BMI) formula and BMI ≥ 30 was considered obesity. The blood pressure of the participants was measured by OMRON M2 digital barometer with accuracy of 0.1 mmHg. Systolic blood pressure > 140 mmHg and diastolic blood pressure ≥ 90 mmHg in at least two separate measurements in two different days were considered hypertension (21). Then, the participants were randomly divided into five groups, including aerobic exercise, garlic extract, aerobic exercise + garlic extract, placebo, and control. The experimental groups were subjected to eight weeks of exercise and/or garlic extract supplement.

SPSS (version 16) software was used for the analysis of data. Normal distribution of data was examined by Kolmogorov-Smirnov test and homogeneity of variances was studied by Levin’s test. Intergroup comparison was performed by dependent t-test and between-group comparison was done by one-way ANOVA and ANCOVA. In the case of significance, the Bonferroni follow-up test was applied. P ≤ 0.05 was considered significant.

This study is taken from a research project approved by Kermanshah University of Medical Sciences (ethical code: IR.KUMS.REC.1398.656) and registered in the Iranian Registry of Clinical Trials (no.: IRCT20190918044813N1). All participants were informed of the study procedures and included in the study after completing informed consent forms. It is noteworthy that the required medical care was taken into account during blood sampling and exercise.

Data were presented as mean ± SEM (standard error of the mean). The results of the pretest showed no significant difference in body weight, blood pressure, ANP, and BNP among the study groups (P > 0.05). However, to eliminate the effect of the covariate variable (pretest scores), ANCOVA test was used for between-group comparisons in the posttest.

Table 1. Anthropometric and Physiologic Characteristics of the Participantsa

This study was aimed to investigate the effect of eight-week aerobic exercise program and garlic extract consumption on serum ANP and NT-pro BNP levels in obese hypertensive patients. Both aerobic exercise and garlic extract could significantly reduce systolic and diastolic blood pressure in the patients. However, there was no significant difference between a combination of these two interventions and each intervention alone in controlling blood pressure. Numerous studies have reported decreased blood pressure following regular exercise (23, 24) or garlic supplement consumption (25).

It has been shown that exercise makes a balance between vasodilation and vasoconstriction cytokines such as nitric oxide (26), prostacyclin, and thromboxane (27). The possible mechanisms of the antihypertensive function of garlic can be associated with its semi-prostaglandin effects, which reduces the resistance of peripheral vessels (28). Garlic decreases the E2 prostaglandin and B2 thromboxane (29). Further, gamma-glutamyl cysteine is a compound in garlic that inhibits the angiotensin-converting enzyme (30). Garlic also inhibits endothelin-1-induced contraction in a dose-dependent manner (31). This study evaluated the weight loss mechanisms and changing levels of natriuretic peptides, which can potentially influence blood pressure.

Although the changes of serum ANP and NT-pro BNP levels due to severe exercise were not taken into account, its high increase following exercise has been reported previously, which can be considered a mechanism for the decreased weight and BMI in this study. The levels of natriuretic peptides are inversely associated with visceral fat (24) and BMI (32). These observations show that obesity may reduce with the lipolytic effects of these peptides (33). It has also been shown that ANP acts as a lipolytic hormone and can increase the free fatty acids and heighten oxidation in skeletal muscles, liver, and adipose tissue (34). Aerobic exercise reduced serum ANP and Nt-pro BNP levels in obese hypertensive patients, while garlic extract only reduced serum NT-pro BNP level.

It seems that the participants recruited in various studies are one of the factors involved in this contradiction. A review of randomized controlled trials found aerobic and resistance exercises decreased natriuretic peptides, especially NT-pro BNP in patients with cardiac failure (36). Plasma NT-pro BNP is known as a useful biomarker for the diagnosis and prognosis of cardiac failure in clinical trials (37). In this regard, a review by Hamasaki (38) showed that exercise increased the natriuretic peptides; however, these peptides decreased 72 h after exercise.

The use of garlic extract reduced the systolic and diastolic blood pressure in obese hypertensive patients, which is followed by reduced weight, BMI, and serum NT-pro BNP levels. On the other hand, regular aerobic exercise reduced natriuretic peptides (ANP and NT-pro BNP), body weight, BMI, and blood pressure. However, concurrent use of aerobic exercise and garlic extract had no additional effect on blood pressure control although it mostly influenced the body composition and levels of natriuretic peptides.