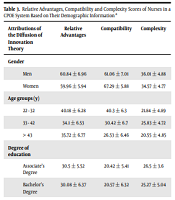 The main objective of this study was to understand the nurses' attitudes in implementation and adoption of CPOE system through Rogers’ innovation diffusion theory.

This study was cross-sectional and performed in four months (from March to June, 2017). In order to understand the acceptance of the CPOE investigated level of nursing staff’s computer literacy. The major factors influencing the nursing staff’s acceptance and use of the CPOE system were examined through Rogers’ innovation diffusion theory. Data were collected using a researcher.

Majority of the nursing staff adopt this innovation. The level of nursing staff’s computer literacy was high (71.32%). Highly educated nursing staff were more likely to accept computer work. The acceptance or rejection of the use of a computer is related to experiencing the HIS system in nursing. Our finding showed that the received relative advantages, compatibility, the complexity of the system were 66.29%, 71.94% and 40.36% for the nursing staff.

Majority of the nursing staff had a good degree of computer literacy. The analysis of the finding shows that CPOE systems improve the quality and safety of healthcare. CPOE increases the security and quality of health care and reduces errors.

Computerized provider order entry (CPOE) systems are electronic versions that end-users can registration orders into a computer application rather than use paper records (1) also ensure standardized, legible, and complete orders (2-4). Technologically, CPOE is discussed nearly half a century (5). Until 2009, CPOE was available in less than 20% of US hospitals (6-8). In 2012, majority of hospitals use CPOE for variety tests (9). While the results of searching show that the only one public hospital in Iran uses CPOE just for prescribing (10).

One of the most popular adoption models for understanding how CPOE innovation between providers is the diffusion of innovations theory and understanding how CPOE innovation accepts between providers (20-22). To increase the scientific value and generalizability this research, Rogers’ innovation diffusion theory was used to analyze the impact of factors on the nursing staff attitudes toward the acceptance or rejection of the CPOE. A CPOE technology’s relative advantage, compatibility, trialability, and observability generally lead to a faster rate of adoption, while increased complexity leads to a lower rate of adoption.

The views and attitudes of nursing staff are essential on the usefulness and ease of use of a CPOE. Since nursing staff are one of the main users of CPOE, in this study, we set out to examine factors that may influence CPOE adoption among nurses in a large healthcare organization. The diffusion of innovation theory was used to understand nurses’ attitudes and thoughts about implementation and use of the CPOE system.

This cross-sectional study was conducted in Urmia City, North West of Iran, in 2017. Four teaching hospitals were in this region: 450-bed Emam Khomeini, 205-bed Motahari, 153-bed Seyedoshohada and 218-bed Taleghani. All nurses working in hospitals were included in data collection. The major factors influencing nursing staff’s acceptance and use of the CPOE system were examined through Rogers’ innovation diffusion theory.

Table 1 describes the research population. A total of 273 questionnaires were distributed among the nursing staff. The results showed that 177 nursing staff (64.84%) completed the questionnaire. Approximately, the number of female participants (n = 94, 53.1%) was higher than the number of male participants (n = 83, 46.9%), and most of them were young with an average age of 34.97 ± 5.85 years.

Table 1. Characteristics of the Nursing Staff in the Final Study Population

4.2. The Level of Computer Literacy

The questions and responses are listed in Table 2. Generally, the level of nursing staff’s computer literacy was high (71.32%). Respondents indicated that a large number of nursing staff download scientific contents from the internet (n = 171, use email (n = 89), also to work on the PC while at the workplace (n = 140).

Table 2. Distribution of the Nursing Staff Responses About the Level of Computer Literacy

The collected data showed that just 26% of the nursing staff was aware of the CPOE system. Also we found that the compatibility, relative advantages, and complexity of the CPOE were 71.94%, 66.29% and 40.36%.

4.3.1. Level of the View of Nursing Staff About the Relative Advantages of CPOE 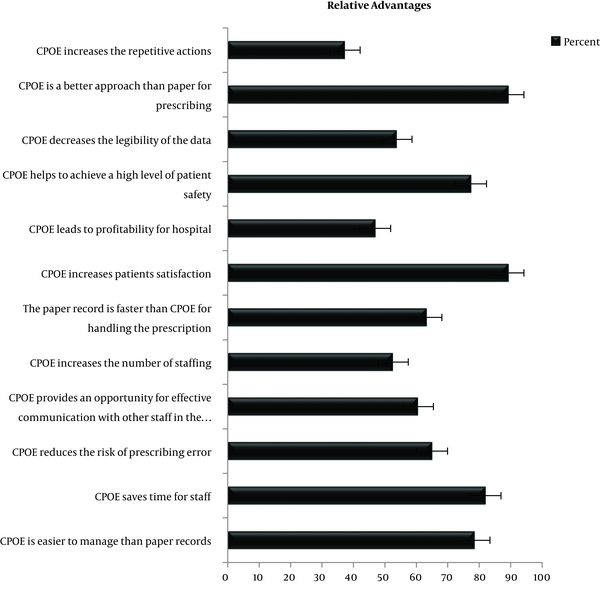 4.3.2. Level of the View of the Nursing Staff About the Compatibility of CPOE 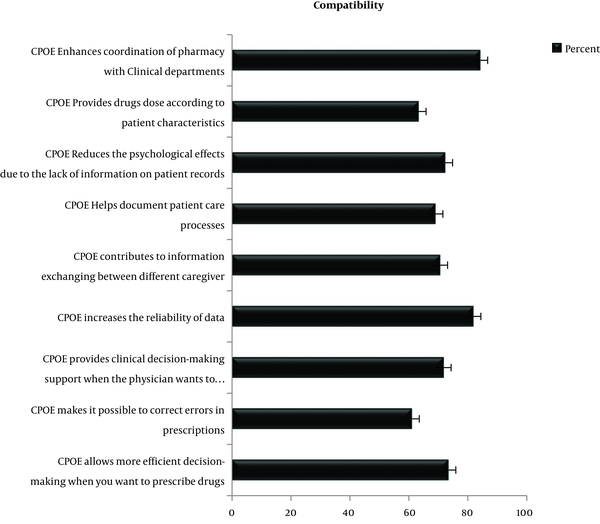 4.3.3. The Level of the View of the Nursing Staff About the Complexity of CPOE 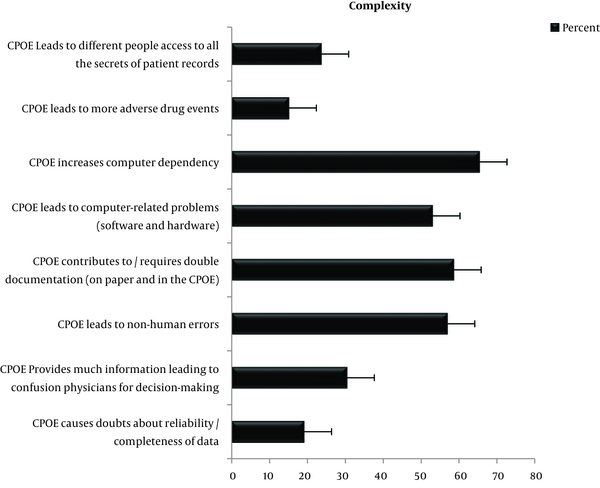 4.4. Comparison of the View of the Nursing Staff About the Innovation of CPOE with Gender, Age, Educational Level, Experience of Using the HIS System and Computer Literacy

Table 3. Relative Advantages, Compatibility and Complexity Scores of Nurses in a CPOE System Based on Their Demographic Information a

The findings showed that the degree of education has the same effect on the recognition of Relative advantages, Compatibility and Complexity of the CPOE system (degree of education section from Table 3). Although nurses with a baccalaureate degree and more had better computer literacy, the educational level did not affect CPOE acceptance (P > 0.05).

All of the organizations and individuals are interested to change (24). The present study has demonstrated that understanding the nursing staff’s computer literacy and their attitude and satisfaction can be effective in accepting and the implementation of a CPOE system. Although prescribing is done by the physicians, our study examines nursing staff satisfaction with CPOE. The results of this study show that to how extent nursing staff agree with the use of computers in the workplace and the implementation of CPOE.

Since the level of nursing staff’s computer literacy was high, it is expected that they would easily accept CPOE. The findings indicated that the educational level did not affect CPOE acceptance. Likewise, Khajouei’s study revealed that there was no significant relationship between nurses’ satisfaction and educational level (27). However, evidence shows that gradual acquisition of the skills through training could effectively increase users’ satisfaction (28). Young nursing staff accepted CPOE implementation more easily.

Often, studies have shown that CPOE provision of just-in-time feedback to physicians when they want to prescribe drugs (29-31). In our study, most of the nursing staff believe that CPOE makes it possible to correct errors at the moment of prescription. Correct errors at the moment of prescription increase patient satisfaction that one ﬁnding in our study demonstrated that approximately all nursing staff thought CPOE increases patient satisfaction.

Another important finding of this study was that approximately half of the nursing staff agreed about increasing prescription legibility. Also study Foster and Antonelli on CPOE showed the same opinion (32). They believe that the advantages of CPOE include order legibility, improved response time, reduction in adverse drug reactions, and improved patient outcomes.

This study has several limitations. First, this study was limited to the perception of innovation attributes such as relative advantage, compatibility and complexity and other studies could be carried out to include other factors such as trialability and observability. Second, the number of the participating nursing staff was also low.

Despite these limitations, this study has identified a factor that could have an impact on the users’ high satisfaction. Results of this study emphasize the importance of training programs that aim at improving computer literacy among nursing staff and ultimately would increase their levels of satisfaction with the system and increase productivity with ease.

This study was supported by Urmia University of Medical Sciences, Urmia, Iran (grant number 1394-01-42-2106). The authors would like to thank all the nurses who participated in this study.

Copyright © 2020, Journal of Clinical Research in Paramedical Sciences. This is an open-access article distributed under the terms of the Creative Commons Attribution-NonCommercial 4.0 International License (http://creativecommons.org/licenses/by-nc/4.0/) which permits copy and redistribute the material just in noncommercial usages, provided the original work is properly cited.
download pdf 229.47 KB Peer Review Comments ( 100.07 KB) Get Permission (article level) Import into EndNote Import into BibTex
Number of Comments: 0