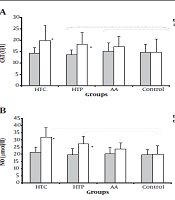 The aim of this research was to study the influence of consuming ascorbic acid during high -intensity endurance training on catalase (CAT), nitric oxide (NO) concentration, and blood pressure (BP) in hypertensive male.

36 hypertensive male voluntary participated in the present study and randomly assigned into endurance training-ascorbic acid (HTC; n = 9), endurance training-placebo (HTP; n = 9), ascorbic acid (AA; n = 9) and control (n = 9). The exercise protocol was including continuous running exercise training with gradually increasing of duration and intensity, 3 times a week for 10 weeks. The supplement groups consumed daily 500 mg of ascorbic acid, and the placebo group consumed the same amount of maltodextrin. Fasting blood samples was gathered before the beginning exercise protocol and one day after last session for analyzing CAT and NO.

Finally, we concluded that, continuous running exercise training has positive effect on the catalase and oxide nitric activity, and can improve blood pressure in the hypertensive men. Anyway, combined the high -intensity aerobic training with ascorbic acid may have not more efficacy.

Nowadays, hypertension is the main threatening factor for mortality and disability in the worldwide (1). Indeed, it is the most common risk factors of cardiovascular disease that lead to heart attack, heart failure, kidney diseases, and vascular dysfunction (2). The major function of endothelial cells is impaired, whereby the resistance of the wall of blood vessels against blood flow increases (3). In hypertension progression various factors are involved hypertension progression including; genetic factors, improper diet, obesity, inflammation, and increased free radical, and oxidative stress status (4).

The importance of reactive oxygen species in the function of vessels and development of hypertension has recently attracted a great deal of attention (4).

It has been reported that patients with hypertension may produce large amounts of reactive oxygen species (5) and have abnormal antioxidant levels (6). In a hands, some biochemical agent role such as nitric oxide (NO) in blood vessel function is very important (7). It has been reported that NO plays a significant role in blood pressure regulation, whose course of production is impaired due to increased oxidative stress (8). NO is a free radical produced from endothelium of vessels in response to the physiological and mechanical stimulation (9). It plays significant roles in many physiological and pathological functions of biological systems. Therefore, NO is a free radical which potentially acts as an endogenous factor which can relax the endothelium (9). Therefore, any disorders in the production or in its bioavailability or its signaling pathway result in different diseases such as hypertension, atherosclerosis, and vascular disorders (10).

In addition, some enzyme antioxidant such as catalase (CAT) is crucial in improving disease processes and preventing oxidation damage by free radicals (11). It has been reported that CAT can reduce H2O2 to H2O and O2, where special control of H2O2 in the kidneys can be a suitable therapeutic method for hypertension (12).

Exercise training is considered a non-pharmacological method to reducing hypertension. In this regard, it has been reported that aerobic exercises training (AET) is better than that of other exercises to reduce and control hypertension (13). Hakimi et al. (2018) reported that aerobic exercises resulting in improved systolic and diastolic blood pressure in hypertension subjects (13). Beside these, healthy diet and nutrition is another important factor which can be effective in improving and decreasing blood pressure (14). In this regard, the role of vitamin supplements antioxidant such as ascorbic acid has been indicated (15). Therefore, it is expected that combining physical training such as aerobic exercises training with ascorbic acid supplement should yield a better effectiveness for hypertension. More interestingly, if this effectiveness is examined in hypertension patients with a mechanism approach, it can be more practical.

The present study was conducted with the aim of investigating the effect of 10 weeks of continuous running exercise training and ascorbic acid supplementation on changes in catalase enzyme, nitric oxide, and blood pressure in hypertension male.

The present study is semi quasi-experimental study, performed as double-blind randomized clinical trial and controlled with placebo, at pretest and posttest design with control group. The statistical population of this research consisted of middle-aged men within the age range of 30 - 45 yrs. with hypertension who had referred to the hospital in west Azarbayjan center. 40 hypertension men were and randomly assigned into endurance training with ascorbic acid (HTC; n = 10), endurance training with placebo (HTP; n = 9), ascorbic acid (AA; n = 9) and control (n = 9).

After the call and announcement in healthcare centers and having contacted those who had referred to the hospitals across the city, 62 men announced their readiness to participate in the research. Finally, 36 male who met the inclusion criteria were participate in the study. The inclusion criteria of the participants was: no experience exercise training, age range of 30 - 40 years, no smoking, and systolic and diastolic blood pressure > 120 and 80 mmHg, respectively any diseases such as circulatory, pulmonary, gastrointestinal disorders, metabolic, and taking reducing hypertension drugs during the research, plus irregular presence in the exercise course constituted the exclusion criteria of the participants.

One week before beginning the exercises in a briefing session, all programs, advantages, and possible risks, as well as the method of performing the aerobic exercise training were explained completely to the subjects. During the implementation of the exercise training, each participant was checkup by medical practitioner. The participants were told that at any stage of the exercise they can quit the course in case they no longer wanted to cooperate. Finally, all participants signed the informed contentment document and notified their preparedness to take part in the study voluntarily. This study approved by MUK (ethical code: IR.MUK.REC.1397.5018) and registered in the Iranian Registry of Clinical Trials (IRCT20191225045892N1). All participants were informed of the study procedures and included in the study after completing informed consent forms. It is noteworthy that the required medical care was taken into account during blood sampling and exercise.

To measure the anthropometric indicators such as the subject’s weight, scale (Seca, Mod 220, Germany) with the precision of 0.1 kg was used. Further, to measure height, wall stadiometer (Kaveh, Mod 44440, Iran) was employed. In order to determine the body mass index (BMI) of the subjects, the following formula was used: weight (kg)/height (m2) (16). Further, systolic and diastolic blood pressure were measured twice in a resting position by a cuff blood pressure monitor (Andon KD-5917, PRC). Mean values were recorded as systolic and diastolic blood pressures.

The protocol of continuous running exercise training consist of 10 weeks of endurance exercises training, in three nonconsecutive session per week. The program of the endurance exercise training included running for of progressive intensity in a gym, where during the start the week, the session length was twenty min, which was performed at the 70 - 80% MHR intensity. As the cardiovascular fitness of the subjects improved, and the intensity of exercise and duration of running also gradually increased. It continued until the intensity of exercise in the last week reached 80% of the MHR, and the exercise session reached 45 minute (17). At the start of sessions, the subjects performed ten min of warming up, and after exercise training, they cooled down for 5 min. The maximum heart rate of the subjects was calculated using the following formula to determine the intensity of the endurance training (18): Maximum heart rate = (Age × 0.7) - 208. During exercises training session, the intensity and number of heart rate was controlled by a pulse meter (polar, China).

The HTC and AA consumed 500 mg of ascorbic acid (Shahrdaru, Iran) daily basis as a capsule, in the morning and after (19). Note that to supply the supplement, ascorbic acid tablets should be placed in capsules. In a similar way, inside the same capsules, sugar was embedded and used as placebo. It should been mentioned that taking of ascorbic acid and placebo in the intervention groups was double-blind.

The blood samples were gathered at pre and post exercise training period. In the pretest phase, one day before starting the training program and after 10 hours of fasting, five mL the blood sample was taken at 8 - 10 a.m. by the technician from the antecubital vein of the right hand in a sitting position, and after 5 min of rest. Also, 72 hr. interval with last training session, exactly similar to the pretest phase, after 10 hours of fasting at 8 - 10 a.m., 5 mL blood sampling was gathered. Next, the samples were directly transferred to laboratory for analyzing. To separate the serum, centrifugation of blood samples was performed at 2500 - 2700 rpm for 5 - 10 min.

The subject’s characteristics presented as mean ± standard deviation in Table 1.

Table 1. The Characteristics of Subjects Before Beginning the Study 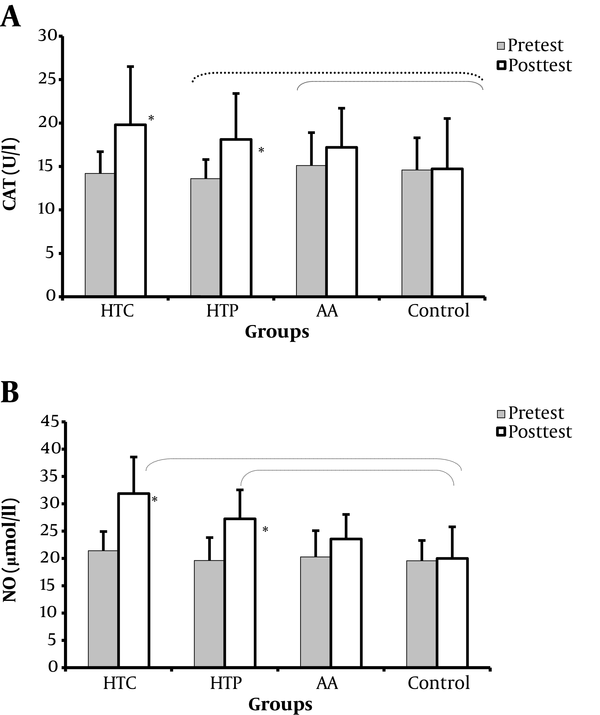 In addition, the results showed that the SBP and DBP significantly decreased in the HTC and HTP, however in the AA and control, it did not change significantly (P > 0.05).

b *Significant difference from pre-test.

The present study was performed with the aim to investigate the effect of vitamin C supplement during high intensity aerobic training on catalase, nitric oxide, and blood pressure in hypertensive men.

Consistent with present results, it has been reported that CAT may increase following aerobic exercises training (20, 21). However, some studies has been reported the opposite results (22). It seems that variable such as, exercises training intensity, subjects health status may effect on the results. Also, type sample may effect on contradictions of results the. In the present study, the subjects were men hypertensive, and its exercise training was done at high intensity, while Vesali-Akbarpour et al. used rats as sample study. During exercise session, especially high intensity aerobic training leakage electron mitochondria increased (23), and may cause to increase ROS and oxidative stress. Therefore, it seems that CAT increment in the present study can be a compensator response to the free radicals production during exercise training session, since CAT can decompose H2O2 to H2O and O2. Furthermore, we found that extent of elevation of catalase serum level was higher in the HTC and HTP, than to the control, while there is no significant difference between exercising group (HTC and HTP). These means that supplementation with ascorbic acid had not effect on CAT activity, and effectiveness high intensity exercise training is more effective than ascorbic acid supplementation.

In the present study SBP and DBP decreased in the HTC and HTP than control, while there is no significant difference was found between HTC and HTP after supplementation and exercise training period. Most likely one of the causes of SBP and DBP reduction can be elevated nitric oxide levels. NO affects the smooth muscles of walls of vessels, and relaxes them. Nitric oxide changes into nitrite and nitrate in smooth muscle cells of the wall of the cells in the presence of oxygen, after which it enters the bloodstream (28). In this way, it can be effective as an important intermediate substance in a variety of physiological actions such as a regulation of blood pressure and vasodilation (29). Nitric oxide results in elevated levels of cGMP, whereby vasodilation occurs, culminating in diminished blood pressure (30). In other hands, it has also been reported that physical activity can improve vasodilation without elevating eNOS through the mechanism of increasing antioxidant defense and reducing oxidation stress, causing enhanced nitric oxide production (31). Therefore, reduction of SBP and DBP may be induced mentioned mechanism.

Generally, it can be concluded that 10 weeks of performing aerobic exercise training alongside ascorbic acid supplementation can cause a significant improve in catalase activity, nitric oxide concentration, and improvement in systolic and diastolic blood pressure in hypertensive men. In any case, the extent of effectiveness of aerobic exercises training is more effective ascorbic acid.

Copyright © 2021, Journal of Clinical Research in Paramedical Sciences. This is an open-access article distributed under the terms of the Creative Commons Attribution-NonCommercial 4.0 International License (http://creativecommons.org/licenses/by-nc/4.0/) which permits copy and redistribute the material just in noncommercial usages, provided the original work is properly cited.
COMMENTS