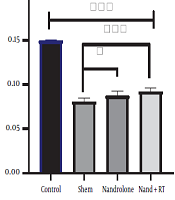 how to cite: Heidari E, Hosseini S A, Azarbayjani M A . Effect of Nandrolone Treatment with and without Resistance Training on Superoxide Dismutase Concentration and Pathology of Kidney Tissue in Rats. J Clin Res Paramed Sci. 2020;9(2):e102497. doi: 10.5812/jcrps.102497.

The prevalence of anabolic steroids abuse in athletes and non-athletes is associated with the risk of injury to various organs, but there are limited studies of oxidative changes in kidney tissue following nandrolone (N) administration.

the aim of this study was to investigate the effect of N treatment with and without resistance training (RT) on superoxide dismutase (SOD) concentration and tissue pathology of kidney tissue in rats.

It seems that N treatment with and without RT reduces SOD activity in kidney tissue, but more studies are needed in this regard given the normality of tissue oxidative stress results.

Today, anabolic-androgenic steroids and growth hormones are widely used in men and women with different goals. Studies show that anabolic steroids are used in athletes to develop strength and increase muscle mass, and in non-athletes to reduce fat mass and increase body mass (1, 2). Although anabolic steroids are prescribed and used for the treatment of some diseases, abuse of anabolic steroids can lead to acute injury, chronic injury and glomerular toxicity in various parts of kidney. These studies show that the abuse of anabolic steroids by the mechanism of activation of the renin-angiotensin-aldosterone system through activation of endothelin and development of free radicals increase the expression of pre-fibrotic and pre-apoptotic proteins, and increase inflammatory cytokines (TNF-α, IL-1b and IL-6).Anabolic steroids also cause changes in the size, glomerular filtration ratio, and changes in the function of the tubules in these individuals (2). On the other hand, nandrolone (N) administration for 6, 8, 12 and 24 months in the treatment of certain diseases in men and women with AIDS had beneficial effects on fat loss and improving immune function (3, 4). Also, consumption of 100 mg/kg N for three months had a significant effect on increased net body mass and decreased serum albumin levels, but no significant change in catabolic ratio of protein, fat, hematocrit factors, glomerular function was observed in renal patients (5). Moreover, dose-dependent N consumption increased lean mass in women with chronic renal injury, with a dose of 200 mg/week having more favorable effects than doses of 100 and 50 mg/week (6). Human studies have investigated the effects of anabolic steroids by interpreting the serum levels of the variables, while fundamental studies of the effect of anabolic steroids on renal tissue provide limited results; in addition, the full effect of stanazole on kidney tissue has not been known yet. For example, six week use of testosterone derivatives in rats altered the expression of nephrin and podocin in kidney tissue and caused pathological changes in renal tissue structure and decreased clearance of blood creatinine, fibrosis and proliferation of renal cells compared to the healthy controls. Also, the rate of injury in the strenuous exercise group was significantly lower than the N consumption group (7). A study showed that the use of stanozolol increased oxidative stress in renal vascular endothelial tissue and decreased glomerular filtration function (8). Also, in another study, resistance training (RT) + N consumption decreased catalase activity and increased glutathione peroxidase activity in cardiac tissue compared to the N consumption control (C) group (9). Previous studies on the effect of N consumption on renal tissue are unclear, additionally the results of human and tissue studies on the effect of Non renal tissue are not fully understood. Given the increasingly prevalent use of these anabolic drugs, it seems necessary to collect and provide comprehensive information that can inform target communities of these effects.

This study aimed to investigate the effect of N treatment with and without RT on superoxide dismutase (SOD) concentration and pathology of kidney tissue in rats.

In this experimental study, 20 male Wistar rats with mean age of 9 ± 1.0 weeks and the mean weight of 191.9 ± 80.60 were purchased and transferred to animal laboratory, and were then kept for one week for environmental acclimation under standard conditions (22 ± 2° C, 12 h light-dark cycle, 55 - 60% humidity in autoclavable polycarbonate cages).

After the adaptation period, the rats were randomly divided into four groups of five rats including 1) control (C), 2) sham (receiving normal saline peritoneally) (Sh), 3) N, and 4) N + RT Groups 3 and 4 received 10 mg/kg N peritoneally once per week (Iran Hormone Company) (10) and the N + RT group performed 1 m ladder climbing for eight weeks and three sessions per week (11). Forty-eight hours after the last training session, the rats were anesthetized with diethyl ether (German Merck Company). Then their kidney tissue was extracted by cleaving the chest and kept at -20° C until the test variables were measured (12). SOD levels in the kidney tissue of rats were measured by ELISA and radioimmunoassay. Hematoxylin-eosin (H&E) staining was used to evaluate oxidative levels of kidney tissue.

The RT protocol in this study consisted of eight weeks of climbing a 1-meter ladder with 26 steps at 85˚ slope. Each session consisted of three sets of five repetitions, with one-minute rest between each repetition, and two minutes of rest between each set. The training was performed after weights were attached to the tail of the rats. In the first week, the weights were 50% of their body weight, increasing by 10% each week to reach 120% by the final week. The animals became accustomed to climbing the ladder during the weeks before starting training, and would be prompted by manual stimulation if they refused. The C group was also present at the training placebo experience all current conditions (11).

Renal tissue biopsy specimens were fixed in 10% formalin and thin slices of the kidney tissue were prepared after processing. Laboratory slides were used for tissue slices, and then H&E staining was performed. The staining steps, respectively, included floating in two containers of xylene (10 minutes each), 96% alcohol (5 minutes), 100% alcohol (5 minutes), and hematoxylin (10 minutes); immersion in alcohol acid container once and then Lithium carbonate; three stages of water washing, eosin (3 min); incubation in 96 and 100% alcohol container, and finally xylol clearance. The specimens were then examined by a pathologist to study the levels of oxidative stress in the kidney tissue.

The Shapiro-Wilk test was used to investigate the normal distribution of the findings. One-way ANOVA with Bonferroni’s post- hoc tests were used for analysis of the findings in SPSS version 22 (P ≤ 0.05). 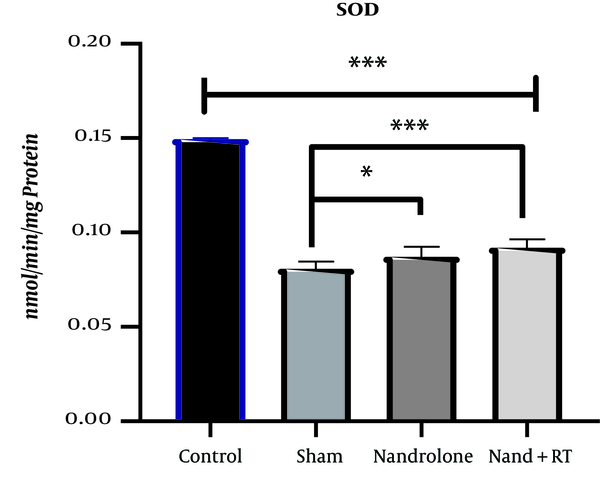 The results of this study showed that N administration reduced SOD levels in the kidney tissue. Researchers have reported in the latest studies that N causes changes in the kidney tissue in both human and animal models (13); N seems to cause hypertrophy of organs such as the heart, liver and kidneys. In other words, the mechanisms of hypertrophy in the cortical tissue lead to increased lipid metabolism, whereas limited studies of antioxidant enzymes in renal tissue following N administration have been reported (7, 13).Based on the researchers, by increasing the levels of blood lipoproteins such as LDL and VLDL as well as lowering HDL levels, N leads to increased lipid peroxidation; this will increase tissue free radicals and reduce antioxidant stores. Disrupting the balance of the antioxidant-oxidative stress system decreases the ability of creatinine clearance in the blood and causes major changes in the metabolism of renal proteins, thereby increasing malondialdehyde levels and decreasing levels of catalase, glutathione peroxidase and superoxide dismutase (7, 9, 13). Following antioxidant balance disruption, programmed cell death pathways are activated, leading to impaired renal function (13). Consistent with the present study, the researchers suggested that N consumption at doses of 10 mg/kg (9) and 20 mg/kg could decrease the activity of catalase, glutathione peroxidase and SOD in the cardiac and kidney tissues of rats. Increased renal hypertrophy in these studies was also reported to be associated with decreased clearance of creatinine, indicating renal dysfunction (13); however, inconsistent with the present study, eight weeks of N consumption at dose of 10 mg/kg/week had no significant effect on renal oxidative changes, although histopathological results showed that glomerular filtration was impaired and blood creatinine levels increased (14)

Differences in baseline levels or toxicity inducing interventions of renal injury appear to be the reasons for the differences in the results of these two studies. The present study was performed only with N to evaluate its toxicity in the kidney tissue, but in Shalaby et al.’s study administration of 4 mg/kg/day was also performed. Also, administration of supra physiological dosage of N once weekly reduced the activity of catalase in the kidney tissue of rats, but had no significant effect on glutathione peroxidase and SOD levels in the kidney tissue (15). It seems that in addition to the dosage of consumption, the variable measurement methods could make differences in results, as in the present study, SOD was measured by histophotometric method, but in the study of Frankenfeld et al. it was measured by mRNA method.

Also, the results of this study showed that there was no significant difference in SOD levels in the kidney tissue of rats following N consumption and RT with N consumption. Previous studies have shown that exogenous consumption of testosterone derivatives in athletes and non-athletes may cause impairment in the kidney through different mechanisms. Exogenous use of anabolic steroids by the mechanism of impairment of the renin-angiotensin-2-aldosterone (RAAS) and endothelin system increases blood pressure in the renal arteries and with positive feedback increases water and sodium uptake, increases water retention in the tubules and increases blood pressure. Vasodilatory depletion in these arteries following vascular stenosis caused by renal vascular epithelium hypertrophy coincides with increased inflammatory factors (TNF-α, IL-1b and IL-6) leading to renal vascular fibrosis (2). Studies have shown that there is limited information on the effects of anabolic steroid abuse on renal tissue. However, in a review study, Luciano et al. suggested that levels of nephron injury and risk of post-hepatic renal injury were higher in athletes who used supra- physiological doses of anabolic steroids (16). Although previous studies have shown the role of anabolic steroids in the recovery of some renal injuries (5, 6), consistent with this study, researchers have shown that anabolic steroids intake is associated with impaired testosterone and blood creatine levels in bodybuilding athletes (17). A case study also found increased nephron calcium and oxidative damage to kidney tissue in a 22-year-old bodybuilder (18). But the role of regular, long-term exercise activity on improving glomerular filtration and albumin-urea reduction in chronic kidney disease has been reported in previous studies (19).

The concurrent use of anabolic steroids and RT on renal oxidative stress markers is still unclear, and further research is needed in this regard. Given that creatinine, urea-albumin, sodium, and potassium are markers of renal injury in blood and urine, lack of measurement of these factors is a limitation of the present study. Therefore, it is recommended to study these variables in future studies. Also, considering the effect of Non fat metabolism and fat peroxidation, it seems that non-measurement of malondialdehyde as a marker of fat peroxidation is another limitation of the present study. Therefore, it is suggested that in future studies, factors such as malondialdehyde and glutathione peroxidase following N consumption without training as well as training along with N consumption should be considered.

In conclusion, N consumption with and without RT seems to have antioxidant-lowering effects on kidney tissue of rats, but given that histological studies showed normality of kidney tissue in all groups, further studies in this area are necessary.

Copyright © 2020, Journal of Clinical Research in Paramedical Sciences. This is an open-access article distributed under the terms of the Creative Commons Attribution-NonCommercial 4.0 International License (http://creativecommons.org/licenses/by-nc/4.0/) which permits copy and redistribute the material just in noncommercial usages, provided the original work is properly cited.
download pdf 14.34 MB Peer Review Comments ( 132.10 KB) Get Permission (article level) Import into EndNote Import into BibTex
Number of Comments: 0