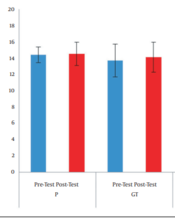 In this quasi-experimental study, 40 female volleyball players aged 16 - 25 years based on body mass index (BMI) were divided into four groups of 10 persons including (1) placebo (P), (2) GT, (3) RT, and RT + GT. During eight weeks, groups 3 and 4 performed RT for three sessions per week, and groups 2 and 4 consumed 3 capsules of 500 mg GT daily after each main meal. Kolmogorov-Smirnov and factorial ANOVA tests were used to analyze the findings (P ≤ 0.05).

It seems that eight weeks of RT, GT and RT + GT are not effective on changes of liver enzyme levels in athletic female.

Resistance trainings (RT) increase muscle strength and hypertrophy (1). Several mechanisms have been suggested for muscle adaptations following these exercises, including increasing the frequency of fast twitch fibers in hypoxia situation, reactive oxygen species (ROS), nitric oxide, secretion of catecholamines, as well as lactate accumulation and anaerobic metabolism- induced increase in growth hormone (2). However, tissue hypoxia increases in RT, and this increase in tissue hypoxia may be damaging to some tissues, including hepatocytes (3, 4). Therefore, RT, along with its positive role in causing physiological adaptations, can also be associated with liver damage. The liver is the largest gland in the body and has been involved in many metabolic functions, including protein synthesis and detoxification, as well as the site of release of various enzymes including alanine aminotransferase (ALT), aspartate aminotransferase (AST) and alkaline phosphatase (ALP). All three enzymes (ALT, AST, and ALP) are extensively present in the liver, and the entry of any damage to the liver cells causes the release of these enzymes into the bloodstream (5). The results of studies reporting the effect of RT on liver enzymes are inconsistent, so that significant decrease (6-8) and no change (9, 10) in lever enzymes after exercises have seen. Drinking green tea (GT) or consumption of its extract has been reported to have a great effect on preventing the accumulation and deposition of lipids around the liver, while also helping to accelerate the healing process of fatty liver (11, 12). Tea has been regarded as a source of biological and pharmacological activities beneficial to human health. The therapeutic properties of tea extract and its catechin polyphenols have led to scientific studies for prevent and treat numerous diseases by this extract. GT scientifically known as Camellia sinensis and is one of the richest flavonoid sources. GT is rich in catechin, epicatechin, epigallocatechin and epigallocatechin gallate (13). These flavonoids and other constituents of green tea, including caffeine, theanine, vitamins and saponins, have been identified as anti-inflammatory, antioxidant, and anti-cancer agents, as well as have been shown to improve insulin resistance and reduce obesity (14, 15). Some studies have shown that GT consumption helps improve liver enzymes in liver disease (16, 17). The effect of exercise along with GT consumption on liver enzymes has also been studied. For example Fathi et al., (2017) reported that eight weeks of GT supplementation along with aerobic training significantly reduced liver enzymes in overweight women (18) also Mansoori et al., showed that ALT and AST significantly reduced immediately after the acute intense interval training and GT consumption (19). However, the effect of RT combined with GT consumption on liver enzymes little has been investigated. RT has attracted the attention of many people, especially women with health goals (20). These exercises result in structural changes and physiological adaptations such as improved muscle strength, body composition, metabolic efficiency, and bone density in women (21, 22). Measuring serum levels of liver enzymes following RT may help to better understand the effects of training on the liver function. In the same way, volleyball players, like other athletes, go through intense trainings to achieve peak performance, and RT is also an integral part of volleyball trainings. On the other hand, the effect of GT on liver enzymes has been less studied, and few studies have examined the effect of GT on liver enzymes in patients or overweight subjects and there has been little research in this area in athletes.

The present study aimed to investigate the effect of eight weeks of RT and GT supplementation on liver enzymes in athletic female.

In this applied study, 40 female volleyball players in Lamerd city of Iran, aged 16 - 25 years, were selected as statistical sample. Initially the research process was explained to all subjects and informed consent form was completed for all subjects. Then 7 cc blood samples (12-hour fasting) were taken from the brachial vein in the laboratory, and demographic characteristics such as age, height, weight and BMI were measured. Subjects were then divided into four groups of 10 persons including (1) placebo (P), (2) GT, (3) RT, and (4) RT + GT based on BMI. During eight weeks, groups 3 and 4 performed RT for three sessions per week, and groups 2 and 4 consumed 3 capsules of 500 mg GT daily after each main meal. Forty- eight hours after last training session and GT consumption 7 cc blood samples gathered in laboratory then blood samples were stored at -20°C. The concentrations of AST, ALT and ALP were measured by enzymatic colorimetric method.

The RT protocol consisted of three sessions of training per week for eight weeks. Trainings were performed at an intensity of 40 to 60% of a maximum repetition until fatigue. The movements included chest press, arm dumbbell, front thigh with machine, back leg with machine, leg press with machine, boat movement, and sit-up with machine. There was 1 - 2 minutes rest between each movement.

Kolmogorov-Smirnov test was used to ensure the normal distribution of data. To compare changes in liver enzymes in four groups of study and in two blood sampling times the factor analysis of variance (ANOVA) in a 4 × 2 design (4 groups and 2 time of measurement) was used in SPSS software (version 22) (P ≤ 0.05).

The demographic characteristics of the subjects are reported in Table 1. Serum levels of AST, ALT and ALP are also presented in Figures 1 - 3 respectively. 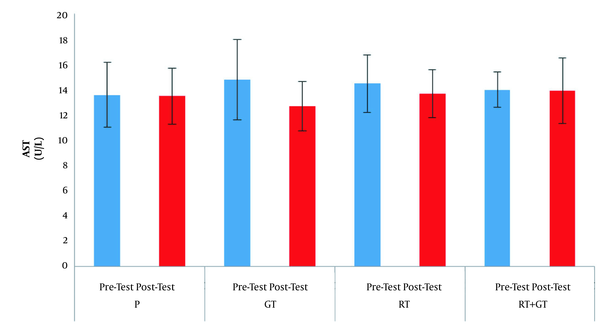 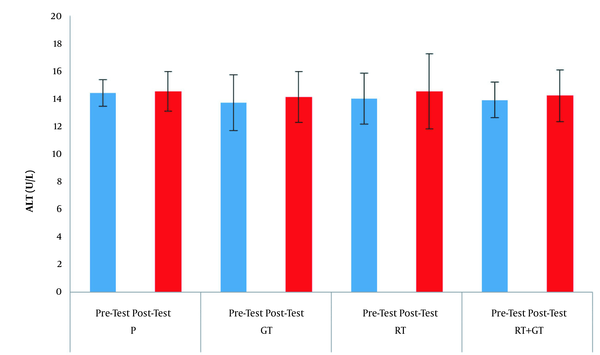 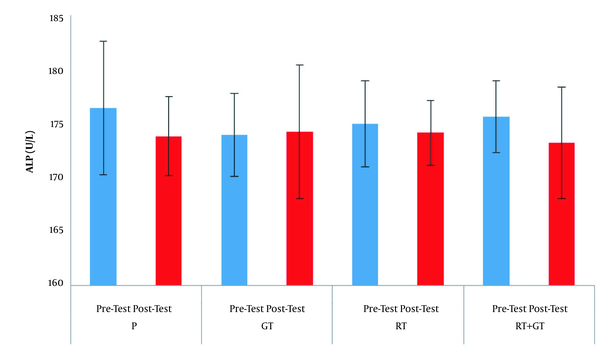 Table 1. The Demographic Characteristics of the Subjects

Findings of present study showed that eight weeks of RT had no significant effect on serum levels of AST, ALT and ALP in athletic female, which is consistent with the results of some previous studies (8, 9, 24). Weight loss has been shown to improve BMI and serum ALT levels (25). Prolonged exercise time and increased exercise sessions per week appear to improve hepatic AST and ALT enzymes. It has been shown that a 12-week aerobic exercise program without energy restriction significantly reduced liver enzymes (26). Contrary to the findings of the present study, some previous studies have reported significant changes in liver enzymes levels following RT (6-8). Different results may be due to differences in individual characteristics such as age, subjects' physical fitness, higher baseline or normal liver enzymes in the subjects.

Also, in the present study, eight weeks of GT consumption had no significant effect on serum levels of AST, ALT and ALP in athletic female. Contrary to the results of present study, some researches have shown that GT consumption reduces liver injury indices in obese and diabetic patients (18). However, in the present study, no significant effect of GT was observed in volleyball players. It appears that athletes of present study had normal resting liver enzymes. GT is one of the richest sources of flavonoids and is used as a medicinal plant (27). Flavonoids have considered in terms of health. In addition, green tea catechins have antioxidant and free radical scavenging properties (28). Therefore, it can be suggested that GT compounds be used as a plant with beneficial properties in athletes.

In addition, the combination of RT and GT consumption had no significant effect on serum levels of AST, ALT and ALP in athletic female. Few studies have shown that GT consumption combined with aerobic training (18) and intense interval trainings (19) induces decrease in liver injury indices in obese and diabetic patients, as well as in professional footballers. The reason for contradicting the results of present with the above findings is the difference in the subjects and especially their training status. RT (29) and GT consumption (30) reduce triglyceride, cholesterol, and LDL levels, as well as increase HDL levels. These positive metabolic changes resulting from regular RT and GT consumption may eventually lead to liver function improvement, which can be characterized by a lack of elevated liver enzyme levels. In present study perhaps if the time of RT with GT consumption was taken for more than eight weeks, it would allow for greater adaptation to the liver enzymes. Strict dietary control and calorie consumption of the subjects were among the limitations of the present study. However, the dosage of GT supplementation should not be ignored, so that it may be possible to achieve clearer results by varying the amount of GT supplementation and its administration at different doses.

It seems that eight weeks of RT, GT and RT + GT are not effective on changes of liver enzyme levels in athletic female.

Thanks and appreciations are offered to all colleagues and researchers who helped us with this article.

Copyright © 2021, Journal of Clinical Research in Paramedical Sciences. This is an open-access article distributed under the terms of the Creative Commons Attribution-NonCommercial 4.0 International License (http://creativecommons.org/licenses/by-nc/4.0/) which permits copy and redistribute the material just in noncommercial usages, provided the original work is properly cited.
download pdf 707.98 KB Get Permission (article level) Import into EndNote Import into BibTex
Number of Comments: 0