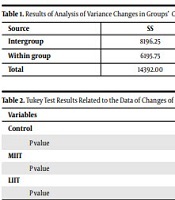 The creatine phosphokinase-MB (CPK-MB) isoenzyme level is useful in determining the myocardial infarction (MI) extent and time. Evidence indicates the possible effect of exercise training on reducing the amount of CPK-MB, but the proper intensity of exercise is still unclear.

In this study the effect of intensity of exercise training on creatinine kinas after a myocardial infarction in plasma levels of male Wistar rats was comparing.

Thirty two male Wistar rats at 10 weeks of age were divided in to four groups [low (N = 8), moderate (N = 8), and high (N = 8) intensity interval training and a control (N = 8) group (no exercise)]. Six weeks later, rats became MI patients through surgery. CPK-MB plasma levels were investigated before training, immediately after training for six weeks as well as 12 hours after MI. The data were analyzed by ANOVA with repeated measure and Tukey (α ≥ 0.05).

In this study, six weeks of interval training with each intensity was likely to make cardiac cells resistant to necrosis resulting in low levels of the CPK-MB enzyme compared to the control group after the myocardial infarction event.

Today, myocardial infarction (MI) as a complication causes thousands of death each year. This disease is definitely serious and more than 7.1 million people suffer from this condition in America (1). This complication, occurs when blood flow decreases or stops to a part of the heart muscle cells.

The main reason for MI is obstructed cardiac arteries (2) cardiac troponin-I (cTnI), cardiac troponin-T (cTnT) and creatinine kinase (CK and its isoenzyme, CK-MB) are regarded as a sensitive and specific marker for myocardial injury (3, 4) which increase as a result of cardiac necrosis.

Creatinine kinase (CK) is an enzyme that catalyzes the reversible transformation of creatine and ATP to creatine phosphate and ADP. It is a dimer with a molecular weight of 5000 Dalton. CK is involved in mitochondria and cytosol in muscle cells. The dimeric enzyme, consisting of two subunits, M and B, has three isoenzymes: (1) CK-BB (CK1), (2) CK-MB (CK2), and (3) CK-MM (CK3). CK-MM is the dominant form found in all tissue. CK-BB is present in the brain, kidney, and gastrointestinal tract. CK-MB can be found in the heart, skeletal muscle, small intestine, diaphragm, uterus, tongue, and prostate (5). For the diagnosis of myocardial infarction, the total CK is not specifically sufficient, but its normal value has a high value in myocardial infarction (5). The CPK-MB test or troponin used for the diagnosis of myocardial infarction. CPK-MB isoenzyme is exclusive to myocardial cells and its level increases in plasma 3 to 6 hours after myocardial infarction. If no new lesions are caused for myocardium, the CPK-MB level will reach its peak 12 to 24 hours later and will return to the normal level 48 hours after infarction. The CPK-MB Isoenzyme level is useful in determining the extent and time of myocardial infarction onset (6). CK is the major cardiac enzyme in patients with cardiovascular diseases. As its clearance and metabolism are well known, its measurement in 12 hours and 24 hours after admission can precisely show timing, quantity and recovery from myocardial infarction (7).

The role of regular physical activity in health has been proven well, but the proper intensity is still unclear (8). Epidemiological studies show that regular exercise training is associated with reduced cardiovascular risks (8). The risk of mortality from coronary heart disease is reduced double in active people than non-active people (9). Despite numerous findings on the relationship between physical activity and cardiovascular harm reduction followed by regular exercise, there is disparate information about verifying the effect of exercise on the cardiovascular system (9). Some of these findings suggest that high intensity physical activity is associated potential risks for cardiac function (10-12). The risks increase even after an hour of exercise (13). Toutsoka also pointed out the increase of creatinine kinase enzyme levels after endurance training (14). In another study, Mariana et al. showed that low-intensity physical activity (50% of maximal isometric force and active recovery) also significantly reduced creatinine kinase levels. In addition, high intensity exercise (70 to 90% of one maximum repetition) also reduces the serum creatinine kinase values (15).

Today, researchers are interested in high intensity interval training (HIIT) in the health of the people as well as low-intensity interval training (LIIT) with a maximum impact on cardiovascular capacity and average intensity (MIIT). All the three intensity trainings are a strong stimulant to cardiovascular and muscular adaptations and increases VO2max, metabolism, athletic performance, reduces the reliance on carbohydrate and fat, improves insulin function, and reduces hypertension. In hypertension and cardiovascular patients, it improves their cardiovascular fitness. As mentioned, countless studies have been conducted related to the effect of activity intensity on the creatinine kinase enzyme. However, there is no straight study in relation to the effect of previous activity in reducing complications of myocardial infarction specifically changes in levels of creatinine kinase. But the evidence suggests the impact of physical activity on reducing the intensity and extent of the condition and also reducing the factors affecting cardiac cells’ apoptosis and necrosis.

The present study was aimed at examining the appropriate intensity of training to prevent and reduce myocardial infarction complications, the creatinine kinase enzyme in particular, as one of the symptoms of this condition.

In this experimental study, 32 male Wistar rats at 10 weeks of age were randomly divided into four groups [low (N = 8), moderate (N = 8), and high (N = 8) intensity interval training and a control (N = 8) group]. The rats were kept in separate cages with free access to water and food parcels according to the principles of Laboratory Animal Care (D NIH-publication) in the 12-hour sleep-wake cycle. Plasma levels of creatinine kinase in rats were measured by blood sampling before the test. Additionally, the rats’ VO2max was measured to estimate the rats’ initial running speed (each rat first warmed for 10 minutes at a intensity of 10 m/min then every two minutes, the treadmill speed was increased to 1.5 m/s until the rats were exhausted. The speed at which the rats became exhausted was included in the formula and VO2max was calculated (16, 17).

Rat’s running speed was calculated individually based on their VO2max. Then, rats were randomly divided into three experimental groups of LIIT, MIIT, HIIT and a control group.

Rats’ activity in the experimental group was based on the following protocol in three days a week for 6 weeks:

Rats were active 8 minutes in warming up program (5 meters per minute) on a treadmill three days a week for 6 weeks. In contrast, the rats in the control group did no exercise. Then, rats underwent surgery after 6 weeks of training and their left descending coronary artery (LAD) was blocked and so the rats took severe myocardial infarction (Risk of myocardial infarction was confirmed by Doppler echocardiography).

Plasma creatinine kinase levels were measured again after six weeks of training and 12 hours after myocardial infarction by Pars Azmoon laboratory kit and using a Selectra2 auto-analyzer (made in the Netherlands). Data were analyzed by ANOVA and Tukey in SPSS18 (0.05).

As the results of the table showed, there was a significant difference between the changes in serum creatinine kinase among the groups. The Tukey test was conducted to examine the differences between the two groups (P = 0.001) and the results are shown in (Table 2).

a Was the difference.

b Was the significance level.

Based on the results, we can conclude that there was a significant difference between the effects of training methods and six weeks of LIIT, in comparison with MIIT and HIIT, managed to significantly prevent the increase of creatinine kinase enzyme 12 hours after myocardial infarction. In the meantime, comparing the MIIT and HIIT protocol indicated that there was a meaningful difference between enzyme changes in the two methods showing the benefit of the HIIT method.

The findings showed that all three intensity type trainings could significantly reduce plasma levels of serum CK-MB compared to the control group. In the meantime, the low intensity interval training was more effective. It seemed that despite increased levels of CK-MB compared to normal values which could be caused by myocardial damage as a result of myocardial infarction (6) this increase was significantly lower in the experimental groups compared to the control group which represented less damage to myocardium in the three experimental groups. Probably six weeks of training with any intensity level can be effective by creating compatibility in reducing harm after myocardial infarction as well as less Cytosol leak after harm and prevents rupture in myocardium cell membranes from increasing too much creatinine kinase. In the meantime, low intensity interval training is more effective by creating compatibility in increasing inhibitory factors and reducing provocative factors in the process of necrosis and apoptosis in reducing cardiac tissue damage as well as creatinine kinase. Probably, the oxidative stress induced by exercise may increase RNA polymerase III which plays a key role in miR-1 and miR-133 gene expression resulting in reducing the apoptosis of cardiac cells (18). Also adaptation to exercise increases Ca2+-ATPase levels that reduces Ca2+ levels. Reduction of Ca2+ can also reduce calcineurin A and finally reduces the amount of CK (18). It seems that handling and transport of calcium has improved due to the effect of adaptation to training (18) and this had increased the natural level of SERCA2 myocardial. On the other hand, cardiac myofibers’ sensitivity to calcium has increased due to training which has activated calcium-calmodulin (CaMK) dependent kinases. CaMK activation also activated HDAC (18). Inhibition of caspase-9 and HSP 60/70 and apoptosis reduction eventually prevented cardiac damage and increased its associated creatinine kinase.

As respects many enzymes and hormones such as lactate dehydrogenase (LDH) are affected by myocardial infarction so it is recommended that their effects will be examined in future studies.

The findings of this study indicated that six weeks of interval training with each intensity was likely to make cardiac cells resistant to apoptosis and necrosis resulting in low levels of the CPK MB enzyme compared to the control group after the myocardial infarction event.

Thanks and appreciation are offered to all colleagues and researchers who helped us with this article.

Copyright © 2021, Journal of Clinical Research in Paramedical Sciences. This is an open-access article distributed under the terms of the Creative Commons Attribution-NonCommercial 4.0 International License (http://creativecommons.org/licenses/by-nc/4.0/) which permits copy and redistribute the material just in noncommercial usages, provided the original work is properly cited.
download pdf 111.77 KB Get Permission (article level) Import into EndNote Import into BibTex
Number of Comments: 0