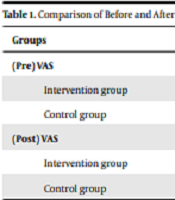 Preoperative anxiety is a common problem of surgical patients because it causes a range of emotional, psychological and physical problems. Numerous pharmacological and non-pharmacological methods have been used to reduce the level of anxiety in patients undergoing general surgery.

The aim of this study was to evaluate the effect of electronic education on preoperative anxiety in patients undergoing laparoscopic cholecystectomy (LC).

The present study was a randomized controlled trial on 88 patients who were candidates for LC in two intervention and control groups in one of the Kermanshah hospitals. Patients in the intervention group received electronic education before surgery. The Visual Analog Scale Anxiety (VAS-A) questionnaire was used to measure anxiety before surgery in the study. Data analysis was performed using SPSS statistical software.

Anxiety is human reaction to any unknown situation (1). Preoperative anxiety is a common problem for surgical patients because it causes a range of emotional and physical problems (2). Presence in the hospital and being hospitalization is a stressful and life-threatening experience for patients that cause fear and anxiety. Surgery is one of the methods of treating many diseases that may cause a stressful experience during the life of any person (3). Surgery, regardless of its extent, duration, and type, has always been considered an anxious experience (4). Anxiety is common in patients who are candidates for surgery, so that Como and Ferreira reported its prevalence in adults between 11 - 80% and by Berns et al. about 20% (5, 6).

The degree of anxiety of any patient depends on many factors. Anxiety is one of the possible causes of cancellation of elective surgeries (7). Anxiety has an effective role in increasing the incidence of heart attack and reduces the observance of care principles such as diet, exercise and correct care activities (8). It has the potential to affect all aspects of anesthesia such as preoperative visit, process of anesthesia, postoperative period and postoperative recovery (9). Preoperative anxiety may increase blood pressure and tachycardia, thus leading to increased postoperative bleeding as well as the need for higher doses of postoperative analgesics and intraoperative anesthetic drugs (10, 11). Death, pain, financial loss, fear of anesthesia, bleeding, and hospital environment are some of the causes of high preoperative anxiety (12, 13). It's reported that more than 20 million people in the United States have gallstones (14). Today, more than 93% of cholecystectomy operations are performed by laparoscopic technique (15). Despite the small incision, pain, and postoperative complications of this surgery, laparoscopic surgery, like any other surgery, can make anxiety for patients (16).

Today, medication is mainly used to reduce preoperative anxiety, while these drugs have side effects such as drowsiness, suppression of the immunity system and sometimes lead to adverse reactions (17), non-pharmacological measures can relieve the anxiety of patients who are candidates for surgery without serious side effects and are usually less dangerous for the patients Compared with other methods (18). In different countries, different non-pharmacological methods are used to reduce preoperative anxiety, including psychological counseling sessions, educational videos, listening to music, showing pictures, and preoperative care (19). Using multimedia as a valuable tool in Patient education and counseling, especially preoperative education, has been introduced to reduce anxiety and control vital signs (20). Preoperative education not only provides information to prepare the patients for surgery but also has many health benefits. Patients who are aware of the surgical procedure have shorter hospital stay, experience fewer postoperative pain and nausea, and lower preoperative anxiety level (21). Some studies have shown that educating patients who are candidates for surgery before transfer to the operating room, regardless of its type, is effective in reducing their anxiety (22-24), although studies with conflicting results have been published (25).

Electronic health (eHealth) and mobile health (mHealth) are potential tools for actively educating patients and reinforcing their behavioral changes (26). Electronic education means the use of new electronic and digital tools in the process of educating patients (27). Most same structure studies have analyzed statistical populations from the United States or other developed countries, and countries with different cultures or with poor economics have been less studied (23).

Since no study has been done on this subject in Kermanshah, the researchers decided to investigate the effect of electronic education on anxiety before surgery in patients undergoing laparoscopic cholecystectomy.

The present study is a randomized controlled trial that was approved by the Deputy of Research and Technology of Kermanshah University of Medical Sciences. This study performed in one of the hospitals affiliated to Kermanshah University of Medical Sciences. The statistical population of the present study consisted of patients who were candidates for laparoscopic cholecystectomy elective surgery that referred to Imam Reza Hospital from April to September 2021. Ninety eight patients entered the study and 88 of them completed the study. Ten patients exclude because of surgery cancellation and withdrawal from the study. After approving the study protocol and receiving the code of ethics, we made the relevant coordination with the mentioned medical center, and then researchers proceeded to implement the study. This study was conducted by the Helsinki Declaration on studies with human samples. In this study, inclusion criteria included at least 18 years old of patients, without any lack in communication skills, ability to read, with any drugs addiction, with any mental problems, any participating in other study and satisfaction with participating in the study. Exclusion criteria included incomplete completion of the questionnaires, surgery cancellation and withdrawal from the study. In-hospital sampling of the study was performed after admission of patients on the day before surgery with available and continuous randomized sampling. The objectives of the study were described for the selected samples and their written consent was obtained to enter the study. It was emphasized that there is no need to mention the name and surname in the questionnaire forms, the mentioned information will remain completely confidential, the results of the questionnaire isn't effect of their treatment process, and participation in studying is optional for them. Based on the randomization process, patients were included in the intervention or control group. Then, demographic information questionnaire and anxiety measurement was completed by subjects included in the study. The intervention group provided preoperative education in the form of electronic-based educational contents. Educational contents included the subjects of preoperative care and preparations, the process of surgical day, the surgical process, and familiarity with the theater space and postoperative care etc. The control group received only routine medical nursing care. Then, the anxiety was measured again. The instruments that used in this study were a questionnaire consisting of two parts: (1) demographic information questionnaire included age, gender, level of education, marital status and history of surgery; (2) the instrument used to measure anxiety was the Visual Analog Scale (VAS). This test is a self-reported anxiety scale. VAS is widely used to determine the presence and severity of symptoms. The VAS consists of a 100 mm line. The VAS score was "no anxiety" on the left and "very anxious" on the right. Patients were asked to rate their anxiety on the scale (28).

SPSS statistical program and descriptive statistics were used to analyze study's data. The level of statistical significance in this study was considered P < 0.05.

Ninety eight patients were included in the study, ten of whom were excluded from the study as mentioned. Finally, the data of 45 patients in the electronic education group and 43 patients in the control group were analyzed. The mean (SD) age of the participants in the intervention group was 41 (11) years and in the control group were 40.7 (10.7) years. Most of the subjects in the intervention (87%) and control (84%) groups were women and housekeeper. The mean duration of surgery was 49 minutes in the intervention group with standard deviation of 9.2 and in the control group 46 minutes with standard deviation of 7.4. Based on the statistical test results, patients in the two groups were homogeneous in terms of demographic characteristics and there was no statistically significant difference anxiety score on the VAS-A scale before surgery between the two groups.

Table 1. Comparison of Before and After Mean Anxiety in VAS-A Scale in Intervention and Control Groups

It has been stated that the presence of preoperative anxiety in all surgical candidates patients isn't an unexpected phenomenon because surgery considered as a potential risk for any patient that can provoke their anxiety and can even be so severe that the patient refuse from surgery (29). Therefore, performing interventions, especially interventions based on modern and up-to-date methods, maybe show us an effective way for reducing the anxiety of surgical candidates patients. The aim of this study was to investigate the effect of electronic education on preoperative anxiety in patients undergoing LC surgery. In this study, the results of statistical analysis in the mean of post-intervention anxiety on the VAS-A scale showed a significant difference between the two groups; Anxiety after the education was significantly lower in the patients of intervention group.

In this study, there was no significant difference between the two groups in the mean of basic anxiety on the VAS-A scale. The results of the study of Amiri et al. (2017) with title of "The Effect of Natural Sounds on Anxiety in Patients Undergoing Coronary Artery Bypass Graft Surgery" showed that preoperative anxiety wasn't significantly different between the two groups (30).

In the study of Mirbaqher Ajorpaz et al. (2014), video training reduced the anxiety of patients who are candidates for surgery (32). Also, in the Fahimi study (2018), trait anxiety was significantly reduced in patients after multimedia educational interventions (33). These studies supported the findings of our study in such a way that electronic educational interventions are low-cost and simple instruments that can reduce patients' anxiety before surgical interventions. These low-cost methods can be widely use in the pre- and post-surgery periods.

In a randomized controlled trial conducted by Chevillon et al. (2015) with the aim of investigating the effect of multimedia preoperative education on delirium and postoperative anxiety in patients undergoing pulmonary thromboembolic end arterectomy, there wasn't any significant difference between the post anxiety test of the two groups (34). This difference may be due to demographic cultural differences and high anxiety from cardiovascular surgery.

It's suggested that if preoperative training is provided through modern educational tools and other electronic methods similar to this study, it may have an effect on reducing patients' anxiety, because one of the benefits of new educational methods is providing information about postoperative care with more details, usability for patients of different levels of education, providing the possibility of step-by-step instruction and frequent reviews (35). In future studies, combined interventions such as educational brochures, educational videos, muscle relaxation, etc. can be used simultaneously and the results can be compared and discussed with electronic methods.

One of the limitations of the present study was extra-anxiety may caused by hospital environment clinic and physician visit, which may have influenced the results of study which was hard to control. Also, the fewer number of males in statistical samples and performing the study during the COVID-19 pandemic situation were other limitations of the study, which were partially controlled by randomized sampling.

The results showed that electronic-based educational intervention can be effective in reducing pre-surgery anxiety in patients undergoing LC surgery. Therefore, it's suggested that these intervention used in preoperative patient education and support as an effective strategy to reduce patients' anxiety and prevent the effects of side effects of surgical anxiety.

The authors appreciate the Research and Technology Deputy of KUMS for supporting this thesis by 4000093 code, and also the managers and staff of the selected hospital in Kermanshah for assisting us in conducting this project.

Copyright © 2021, Journal of Clinical Research in Paramedical Sciences. This is an open-access article distributed under the terms of the Creative Commons Attribution-NonCommercial 4.0 International License (http://creativecommons.org/licenses/by-nc/4.0/) which permits copy and redistribute the material just in noncommercial usages, provided the original work is properly cited.
download pdf 106.65 KB Peer Review Comments ( 165.12 KB) Get Permission (article level) Import into EndNote Import into BibTex
Number of Comments: 0