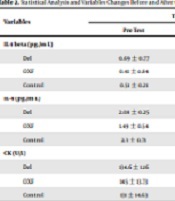 Exercise intensity sequence of resistance training (RT) has a key role in the physiological response and adaptations.

The aim of the present study was to compare the effect of DeLorme and Oxford resistance training techniques on the concentration of interleukin-4 (IL-4), interleukin-1 beta (IL-1beta) and creatine kinase (CK) enzyme in overweight men.

Thirty overweight young men (25 ≤ BMI < 30) voluntarily participated in the present study and were randomly assigned to the DeLorme (Del; n = 10), Oxford (OXF; n = 10) resistance training techniques and control (Con; n = 10). Del performed 4-5 sets at intensity of 50% of one-maximum repetition (1RM) for warm up, the second set with 85% of 1RM, the third set at 90% of 1 RM, and the fourth set at 95 of 1RM, and finally the fifth set at 100 1RM of exercise, while the OXF performed mentioned protocol exactly reverse order for eight weeks. RT was done three day/week in nonconsecutive for eight week. Blood sampling was gathered before RT, and repeated 72 hour after the last session of RT, and the levels of CK activity as well as the concentration of IL-4 and IL-1beta concentration were measured in the plasma.

The positive effect of resistance training (RT) on many diseases and physiological systems is well established (1). RT can increase body mass and improve body composition, improving blood pressure and insulin resistance, as well as reduce oxidative stress and improve systemic inflammation (1). Systemic inflammation has been reported to be associated with many diseases, including cardiovascular disease (CVD) (2). Plasma indices of inflammation include an increase in some pre-inflammatory cytokines (3). Interleukin-6 (IL-6), interleukin-4 (IL-4), and interleukin-1beta (IL-1beta) are cytokines that show more inflammation than normal values, and are associated with cytokines and pre-inflammatory factors (4).

Anyway, RT has many factors and variables compared to other types of exercise training mode such as aerobic training, and it seems that the change in each variable of RT has a special response and adaptation to training (8). Accordingly, this issue has been considered by studies and in this regard, some variables of RT such as intensity on changes in pre-inflammatory cytokines have been investigated (9).

However, the intensity of exercise is an important factor in influencing many biochemical changes and adaptation (8). But how to apply the intensity of the exercises, especially in RT, can also be considered. In this regard, it has been reported that the intensity of training from high to low and or from low to high during resistance training improves strength, and there is no difference in the amount of cell damage between the two types of training (10).

All participants were required to be eligible for the following research prior to enrollment. (1) None experience in regular exercise training programs. (2) No history of common chronic health problems. (3) No smoking. (4) Have not taken any antioxidant supplements for the past 6 months. After explaining the full description of the topic, goals, study methods, and completing and obtaining the consent form health questionnaire and sports history of all volunteers after fulfilling the mentioned conditions. The present study was carried out with the approval of the ethics committee of Sport Sciences Research Institute of Iran with the ID number (IR.SSRI.REC.1399.797).

First, anthropometric indices were measured in the first session. Initially, the subject’s weight and height were assessed by scale and audiometer (Seca, Mod 285, Germany) according to the instruction. Then, based on the weight and height, body mass index (BMI: kg/m2), all subjects were calculated. After that, subjects were trained in a separate session on how to properly perform the resistance exercise program and safety tips. Firstly, each exercise was performed by the coach, and sufficient explanations were presented for subjects. The subjects then performed the exercise without load. During the performing exercises, the subjects were given the necessary explanation and feedback on exercise technique.

Also, the general and specific resistance training warm up were explained to the subjects. Then, in the last session of training, the measurement of maximum repetition (1RM) in Leg press (LP) and Bench press (BP) exercise in all three groups was estimated through the Brzycki equation (11). In this way, the subjects selected a weight by initial estimation of their maximum strength, and performed the exercise to the exhaustion (the number of exercise need to be less than 10 repetitions). Then, by including the amount of weight and the number of repetitions in the formula for the estimation equation, a 1RM was calculated by the Brzycki formula. (0278/0 × Number of repetitions to the point of fatigue) - 0278/1 [/ amount of weight transferred = one more repetition.

The resistance training was performed three times a week in nonconsecutive days for eight weeks. All training sessions were done simultaneously in the Del and the OXF at 5 PM under the supervision of the expert coaches. The exercises for the upper limbs were chest press (CP), lat pull down (LP), bicep (BC) and triceps curls (TC) barbell. Also Leg press (LP), knee flexion (KF) and extension (EF) with machine were included in the lower limb exercises. Sit-ups exercise are also used to improve the abdominal and trunk muscles. Also, 5 - 10 minute warm-up training was included at the beginning and end of the each session. (10)

The OXF also performed the exercise training program using the method of gradual reduction of intensity and increasing the number of repetitions (10). The control group did not participate in any physical activities or exercise training, and continued their daily activities without any change (10).

In order to evaluate the biochemical variables, 5 mL blood sampling was gathered in two phase, before any intervention, and also after 2 months of resistance training in fasting status with 48 hour interval with the last exercise training session. Subjects were first asked to avoid any physical activity 2 days before the test. Then 5 mL of blood sample was gathered from the antecubital vein in setting position after 15 rests at 8 - 10 am. After that, the serum was separated from the cell by centrifuging (Hitek, Germany) in the 2500 rpm for 7-10 min. IL-4 concentration serum IL-4 and IL-1beta were determined by an enzyme-linked immunosorbent assay (ELISA) with special kits according to the specifications of the manufacturer (abcam, Co, UK). Kits [(ab215089, UK); (Sensitivity: 1.08 pg/mL; Intra-assay: 6 %; and Inter-assay: 7%] and [(ab46052, UK) (Sensitivity: 6.5 pg/mL; Intra-assay: 4.5%; and Inter-assay: 8.7%] were used for IL-4 and IL-1beta assay; respectively. Also, the CK activity of enzyme was measured by the kit (Pishtaz Teb, Iran). The activity of CK in the (U/L) and the concentration values of interleukin-4 and interleukin-1beta were expressed as (pg/mL).

All data were expressed as (Mean ± SD). Kolmogorov-Smirnov test was first used to test the normality of data distribution. For the comparison of before and after the intervention, ANOVA with repeated measure was used. All statistical analyzing were performed at a significance level of P ≤ 0.05 using SPSS-16 software.

The anthropometric characteristics of the subjects are presented in Table 1.

Table 1. Characteristics of the Subjects Before Resistance Training Intervention a

a Values are presented as mean ± standard deviation.

Table 2. Statistical Analysis and Variables Changes Before and After the Resistance Training a

a Values are presented as mean ± standard deviation.

The aim of the present study was to investigate the effect of DeLorme and Oxford resistance training techniques on changes in IL-4, IL-1 beta and CK in overweight men.

The strength changes indicate that resistance training protocol in the current study could challenge the physiological systems, and therefore it has been effective on stress and stimulate systems.

Results showed that there was no significant difference in BMI between the Del and OXF before and after eight weeks resistance training.

The results showed that both Del and OXF did not significantly change IL-4 and IL-1beta concentration after 48 hours of the last session of resistance training. Also, we found that intra-group changes (time effect) were not statistically significant; this means that, regardless of the resistance training technique, both RT protocols had not a significant effect on IL-4 and IL-1beta. Therefore, it seems that the oxidative stress and damage caused by both protocols is similar, because the amount of these cytokines as inflammatory systemic indices had similarly behavior after both resistance exercises. It has been reported that exercise leads to a robust inflammatory response mainly characterized by the mobilization of leukocytes and an increase in circulating inflammatory mediators produced by immune cells and directly from the active muscle tissue (12). However, the relationship between CK and inflammatory responses to exercise and physical activity suggests that resistance training will disrupt myofibrils (13), especially during the eccentric phase. The rupture of the fibers leads to inflammatory responses that are modulated by cytokines (14). Cytokines have been shown to play an important role in muscle repair and repair processes (15). Consistent with the results of the present study it has been reported that resistance training for four months did not affect on IL-6 and TNF-alpha levels in healthy middle-aged men (16). However, it has recently been reported that moderate to high resistance training improve inflammatory factors in inactive elderly women (17). With considering the intensity of resistance training, the present resistance training protocol is similar with the resistance training protocols mentioned in the study, however, it seems that some other factors such as subject’s sex, age and resistance training duration may affect the discrepancy of these results (18, 19), because gender hormones such as estrogen may affect inflammatory factors (20). It doesn't seem reasonable to introduce that the duration of the current resistance training (8 week) is the main cause for the unchanging IL-6 and IL-1beta (21). However, in refuting this issue, it should be noted that studies that have used the same duration (10-12 weeks) have reported a significant reduction in IL-6 and TNF-alpha (22). Therefore, the different cytokines behaviors do not appear to be due to the different of the training protocols used in the studies, and physiological factors such as body fat percentage should be considered.

However, in comparison between the effects of exercise training on changes in inflammatory indices, some inconsistencies are related to the type of sample from which the cytokine was measured (tissue sample vs. plasma samples). On the other hand, biochemical methods of measuring cytokines (ELISA vs. Flow Cytometry) and human factors are also involved. However, because IL-4 and IL-1beta, as well as the activity of CK, were not affected by resistance training, it was difficult to compare intergroup and the susceptibility of these cytokines to the two types of resistance training technique with varying sequences intensity, it will be inexplicable.

Finally it can been concluded that Delorme and Oxford resistance training technique did not have favorable effects on systemic inflammatory factors, and it can be said that the sequence of resistance training intensity did not influence on the inflammation and injury and there is a need for further research in this context.

Copyright © 2022, Journal of Clinical Research in Paramedical Sciences. This is an open-access article distributed under the terms of the Creative Commons Attribution-NonCommercial 4.0 International License (http://creativecommons.org/licenses/by-nc/4.0/) which permits copy and redistribute the material just in noncommercial usages, provided the original work is properly cited.
download pdf 121.75 KB Get Permission (article level) Import into EndNote Import into BibTex
Number of Comments: 0