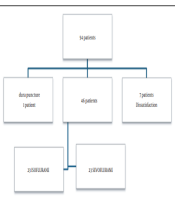 Maintenance of Anesthesia in Paranasal Endoscopic Sinus Surgery: Sevoflurane or Isoflurane? Which One Is Better?

Volatile anesthetics are the most prevalent drugs in maintenance of anesthetics and their platelet effects are compared. Functional endoscopic sinus surgery is known as a common type of nasal surgery. One of the most problems in this surgery is the blood filling up the nose or obscuring the lens of the camera as well as the surgeon’ view. It can cause the procedure take longer or accidently damage surrounding structures such as eye and brain.

This study was performed for comparing the effectiveness of isoflurane and sevoflurane on the bleeding rate of functional endoscopic sinus surgery (FESS).

This study is a triple blind study on elective functional endoscopic sinus surgery. A total of 23 patients were assigned to each group, and after informed consent, isoflurane was administered for one and sevoflurane for another group. The evaluation was performed by an anesthetic assistant who arrived at the end of study plus the grade score. The surgeon also evaluated the extent of bleeding during the surgery. The results were assessed by Spearman and Mann-Whitney tests.

Nose endoscopic surgery is used as a common operation in head and neck surgery. The common indications for this type of surgery are nose polyps, chronic sinusitis, foreign body removal, and mucocele treatments (2). One of the main problems in endoscopic nose sinus surgery or functional endoscopic sinus surgery (FESS) is bleeding during surgery. Bleeding fills the surgery field and obscures the surgeon’s vision. This causes prolonged surgery and sometimes damage to the patient’s brain system (5, 6).

This was a double blind randomized controlled trial. The study was approved by ethic committee at Kurdistan University of Medical Sciences (IR.MUK.REC.1396/36) and it was registered in IRCT (IRCT20120801010471N3). The patients referring to Tohid and Kowsar Hospital of Sanandaj city for elective sinus endoscopic surgery were evaluated. The sample size was calculated as 23 patients in each group considering the first type error of 5%, the blood volume loss of 60 cc and 120 cc in the first and second groups respectively in the group (based on bleeding rate of 30 cases that evaluate as a pilot study), and the power of 90%. The inclusion criteria were all elective patients between 18 and 60 years old with ASA 1, 2 undergoing elective FESS surgery. The study exclusion criteria were: BMI ≥ 30, history of alcohol or drug use, pregnancy, medications affecting MAC, any hematologic problem, communication problems, fungal sinusitis or nose polyps greater than 3 (due to increased inflammation and vascularity of the vessels, both of which causing increased bleeding in the surgical field and Surgery Grade Score) (5).

The included patients were randomly assigned to sevoflurane and isoflurane groups. Random allocation and provision of anesthetic medicines was performed by an anesthetist who would not interfere with the procedure and outcome measurements. We covered the surface of vaporizers by a shield.

Surgery was then performed by an ENT specialist with a surgical board. Continuous clinical monitoring was performed with EKG, pulse oximetry, temperature, BP for every 3 minutes, and Bispectral Index (A 2000 BIS_XP, aspect medical system INC, Norwood, MA, USA). The patients’ height and weight in both groups were evaluated at the beginning of the entry by similar devices and anesthetics assistance. Subsequently, 5 minutes before initiation of induction, 5 mL/kg of ringer was administered. Then, 2 μ/kg of fentanyl, 0.15 mg/kg midazolam, 1 mg/kg lidocaine, 8 mg dexamethasone, and 10 mg of metoclopramide were injected in 5 minutes to the patients. Then, propofol at a dose of 2 mg/kg was administered for induction in 30 seconds. During induction, 100% oxygen was inducted to the patients. After disappearance of lash reflex, a dose of 0.5 mg/kg bolus of atracurium was injected for muscle relaxation in 30 seconds. Intratheracheal intubation was performed with spiral tube number 7 for women and 7.5 for men. After intubation, mechanical ventilation was done to reach end tidal CO2 25 - 35 mmHg with 50% O2 + N2O and the volume of 8 cc/kg and I/E: 1/2 and peep: 0 and RR: 12. Both sevoflurane and isoflurane groups were given 1 MAC during inhalation anesthetic operation. Our goal was to reach MAP: 65 and HR: 85. Then, if MAP was lower than 60, 5 mg of ephedrine bolus was prescribed. If MAP was greater than 85, 50 μg of TNG was injected.

We did not exclude patients for any other reasons including use of another medicine or changing the patient’s ventilation. During surgery, every 30 minutes, according to the value of TOF, non-depolarizing muscle relaxation was repeated based on narcotic BIS. Immediately after completion of the surgery, all medicines were discontinued except for oxygen, and the patient was extubated after observing airway reflexes. A large sterile curtain cover was used for the anesthetic surgery field. Note that the surgeon had no knowledge of the type of medicine used during anesthesia. Then, the amount of bleeding was measured based on the mass of utilized sterilized gases using a calibrated scale each day and the amount of blood accumulated in the suction in terms of cc. This evaluation was performed by an anesthetics assistant who arrived at the end of the study with no knowledge of inhalation medicine. And after 60 minutes through Grade Score, the surgeon also evaluated the extent of bleeding during the surgery. Surgeon opinion is evaluated by the questioners based on Yoo et al.’s study (5).

Three different surgeons carried out the 46 procedures using the same technique. There was no case selection by surgeons of the 46 patients (7).

The data were analyzed by software SPSS 17.0. First, quantitative data were described, after which the mean and standard deviation were calculated. Then, the frequency and percentage of the qualitative variables were also presented. After the study, the mean bleeding value was compared using independent t-test. Using repeated measurement, the bleeding rate between the two groups was compared.

54 patients were entered to our study.one of them had a complication of surgery (dural puncture) and seven patient’s dissatisfaction and exit the study (Figure 1). 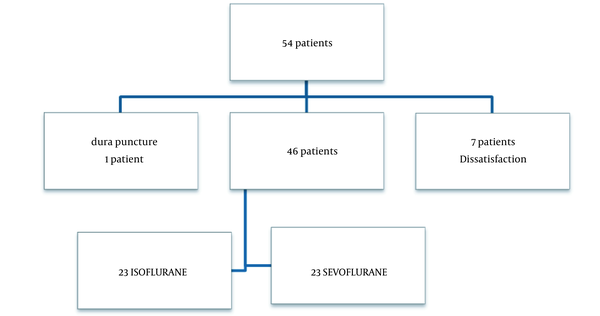 Frequency of all participant in study

There is a lot of maneuvers to achieve a bloodless surgical field and thus improves the surgeon’s sight. Getting to the point that anesthesia procedure can reduce blood loss is not a new idea. Some studies have cited to reduce amount of blood loss in local anesthesia than general anesthesia. Although the surgical conditions are statistically affected by heart rate and blood pressure, low blood pressure has traditionally been associated with a reduction in bleeding, however, complications like elevated reflex blood pressure, reflex tachycardia, vasodilatation, and ischemia of the body organs have also been reported (8). We want to evaluate the effect of two kind of volatiles on bleeding rate of surgery.

Intraoperative blood loss may be associated with complications such as skull base damage and increased cerebrospinal fluid leakage. Factors that can reduce the level of blood loss include surgical procedures and anesthesia, including the control of blood pressure and the patient’s position (9). Isoflurane and sevoflurane are considered as common anesthetics for maintenance of anesthesia in Iran. Some studies have indicated that sevoflurane has more potent inhibitory effects on platelet accumulation (4). Further, many surgeons in our hospital’s surgical centers claim that the use of sevoflurane and isoflurane act differently in reducing the amount of intraoperative blood loss. Sevoflurane is also more expensive than isoflurane and the health economy was also as one of the reasons for carrying out the present study. The results of data analysis revealed differences between the two groups in terms of age, weight, and the minimum pressure. All the necessary points were taken into account while carrying out the clinical trial procedure. Although all the randomization process was carried out, these results were achieved (Table 1). This result is consistent with the results of the Yoo et ai.’s study (5). The present study revealed no significant difference between isoflurane and sevoflurane groups in terms of the amount of blood loss in endoscopic surgery in and our qualitative assessment of surgeons also did not significantly correlate with the quantitative blood loss (QBL) (Table 2). This issue is one of the major challenges in our center and there is always a discrepancy between the surgeon’s assessment of the amount of blood loss and the amount of QBL, from which the anesthetist is aware of. It is noteworthy that one of the patients who were excluded from our study was a patient that underwent long surgery due to dural tear. Although the surgeon did not consider blood loss as the main cause of this issue, it was thought of as one of the causes. One of the traditional assumptions regarding the reduction of the intraoperative blood pressure is to have proper control blood pressure at the beginning of the surgery, and it is argued that the amount of blood loss will increase significantly in the event of inappropriate blood pressure at the beginning of the surgery, which was investigated in the present study and there was no significant relationship between the amount of blood pressure at the beginning of the operation and the amount of intraoperative blood loss and blood pressure (Table 2).

There was no difference between isoflurane and sevoflurane, two inhalation anesthetics, in terms of reducing the amount blood loss for maintenance of anesthesia during endoscopic nasal surgery.

The involvement of many surgeons in the type of the preservative, which led to several days of delay in the study, was solved after a holding a session. Another important point is obtaining informed consent form from patients in our country; however, there is a lot of resistance in this area and the team conducting the study did its best to provide adequate explanations in this regard, and six patients were excluded for the same reason.

Copyright © 2022, Journal of Clinical Research in Paramedical Sciences. This is an open-access article distributed under the terms of the Creative Commons Attribution-NonCommercial 4.0 International License (http://creativecommons.org/licenses/by-nc/4.0/) which permits copy and redistribute the material just in noncommercial usages, provided the original work is properly cited.
download pdf 281.86 KB Get Permission (article level) Import into EndNote Import into BibTex
Number of Comments: 0