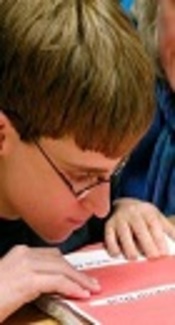 Orientation means the personal ability to use the senses to determine one’s location and what relationship he/she has with environmental objects and persons. This ability is important for a blind person, so the purpose of this study was to review the developmental status of spatial orientation of students with visual impairments compared with normal ones.

Subjects of this descriptive-comparative study were 8 - 12 year old students selected from public schools of Kermanshah. They included 65 students in a cluster-random way as the healthy group. Thirty children with a visual acuity between 0.05 and 0.4 diopter as the low vision group and 16 ones with maximum visual acuity of 0.04 diopter as the blind group were included from rehabilitative centers. Their spatial orientation capability was measured by throwing a ball towards a target and counting the dribbling of a basketball for 15 seconds. Analysis of data was performed by SPSS software in descriptive and perceptional statistics (one-way ANOVA and post hoc tests).

Statistical results showed that there was no significant difference among the 3 groups in throwing the ball towards the target but there was a difference in the other test.

There was no significant difference in the test of throwing a ball towards the target indicating corrective and compensatory mechanisms, but in dribbling the ball test there were significant differences among the three groups, and the healthy children compared with the visually impaired ones were in a better condition to show the importance of visual receptors for obtaining information from the surroundings.

Vision, as the most powerful source of external world perception, has the duty of transferring 80 to 90 percent of the acquired data to the brain. The existence of even minimal disorders in its performance leads to apparent severe disorders in physical, mental and motor development (1)

Due to the importance of vision in social communication, visual impairment is more obvious than other disorders and is of greater concern for the patients (2). Therefore, the experts in psychological, psychotherapy, physical education and sport sciences have paid more attention to the effects of vision on body activity and individuals’ mental health, specifically among disabled people, in order to find suitable methods for public health.

All motor performances are directed by the central neuronal system and the relevant transferal tracks, because mobility is the primary and internal form of all human activities (4).

In childhood, motion has always been associated with vision and the child moves to get the object that has been already visualized and these activities form gross and fine motor skills. While some children suffer from visual disorders, normal children observe, compare their motions with other parts, and correct them. This fact is not realized in the blind and visually impaired children. These children gradually ambulate just with their audiology capabilities (5).

According to Griffin, Shirley, Trusty and Rickard (2000), orientation and mobility includes two separate but relevant parts, where orientation means the personal ability to use the senses to determine where one is and what condition there is in relation with objects and environmental individuals. Mobility means the ability to move around (6).

A blind person, in order to have the suitable mobility and orientation needs required and important information about the environment and space, and body knowledge, applying hearing and the sense of touch. A blind person should be aware of his/her other abilities and improve them to reach the main goal of orientation and independency and improvements in the quality life (7, 8).

A visual impaired person, first of all, should improve the other senses including hearing, touch and olfactory, which is the main assistant of the child’s motion and orientation, to know where and what he/she is going to do (7).

The existence of efficiency in each organism forces it to resolve disorders and compensating for the damages. The effects of deficiency in the body’s organism are permanently dual and paradoxical. On the one hand it weakens and hurts its performances considered as its negative aspect, and on the other hand the created disorder is positive simulation of other performances to compensate for deficiencies (9).

Compensatory mechanisms in children with visual impairments are done indirectly. compensating deficiencies resulting from visual deficiency are not possible directly, and instead are through the other senses; this performance is called sensory compensation theory (10).

According to the above discussion, these questions should be asked: 1) Are the visually impaired children successful in spatial mobility and orientation regarding the compensatory aspect of deficiencies and the existence of corrective and compensatory mechanism? 2) Is there any difference between these children and normal ones?

In this descriptive comparative study, the spatial orientation capability growth was investigated in blind and low vision students in comparison with their healthy peers. The sample of the test was all of the students 8 - 12 years old in public schools in Kermanshah, where 65 students were selected randomly as the healthy group, and 30 students were selected from special and public schools with a visual acuity between 0.05 or 0.4 diopter as the low vision volunteer group and 16 students were selected from special schools with a maximum visual acuity of 0.04 diopter as the blind group. The spatial direction capability was measured by throwing a ball towards a target and counting the dribbling of a ball within 15 seconds. To regulate the intensity of exercise pressure and considering the principal individual differences, factors like: controlling the child’s symptoms including skin color, the amount of sweating, deep breathing, movement execution and expressing emotions were applied. However, the exclusion criteria were secondary disorders such as cardiovascular and skeletal system problems. Analysis of data with SPSS software in descriptive and inferential statistics (by one-way analysis of variance [ANOVA] and post hoc Tukey tests were performed to investigate the mean difference of the indexes at P ≤ 0.05).

The results of the test in throwing the ball to the target showed no significant difference between the measures as one of the samples’ spatial orientation capabilities. It means that there was no difference between healthy children and low vision and blind children (Table 1).

However, the results of the test of dribbling the ball showed a significant difference between the two groups. In order to determine the different results, a Tukey post-hoc test was performed (Table 3).

Table 3. Comparing the Frequency of Dribbling the Ball in the Three Samples’ Groups

The results of this study showed visually impaired children, despite the type and level of visual disorder, in some of their motor abilities were retarded as compared with their peers, which indicates the importance of vision as the most important informative source from the surrounding environment for executing capabilities. It also emphasizes the importance of peripheral vision, which has a significant role in conception surrounding. Spatial and big objects have a higher sensitivity compared with mobile objects and provide spatial orientation as well (11).

Lack of a significant difference between the three groups implies the sufficiency of compensatory mechanisms in blind children and a corrective mechanism in low vision ones for compensation. Auditory sensation is very important for children with visual impairment, because auditory stimulation in addition to influencing the auditory sensation in low vision and blind children provides the possibility of spatial orientation and environmental conception through voice in a way that transfers impulses from motor sensors to the central neuronal system. These signals transfer the relevant data to the kymographs, working the muscles and interactions of bony levers, which are adjusted with muscular activities. If this sensation becomes disabled, other sensory organs especially vision completes its performance. Eye closure can lead to falling from an upright posture by second sensory organ deprivation. According to this common biological and psychological theory (sensory compensation theory), deficiency during abnormal growth construction leads to a defect in the performance of the person. A corrective simulation mechanism by stimulation of the rest of the function of the damaged organ and compensating mechanisms with sensory organ replacement is the mechanism for compensating deficiency by the other organs. In blind children, the defect for the perception is compensated by other senses including touch, auditory and olfactory senses as far as possible (12).

However, regarding the features of this capability it can be concluded that the reason for the existence of such differences in spatial orientation results from lack of experience rather than visual disorder, that is, a reflection of sensory and educational deprivation in the field of neuro-muscular harmony with other senses rather than motor deficiency, because visual disorder leads to isolation and motor delay. These factors decrease executing motor skills experience as well as motor adjustment (13).

The results of the study indicate that due to the complex and combined nature of motor-harmonious capabilities, the physical education instructors should be aware that assessing tools and methods and developing such capabilities are very diverse. Low vision and blind children despite their visual impairment enjoy some potential for compensating for deficiencies in motor adjusting capabilities. Their performance level is diverse in different parts of these capabilities and the instructor should try to realize them.

In these children, disregarding the type of exercises and considering their safety, only motor opportunities should be provided for children that have a determining role in rehabilitation, learning, motivation empowerment, mobility and orientation (16).

Copyright © 2018, Journal of Clinical Research in Paramedical Sciences. This is an open-access article distributed under the terms of the Creative Commons Attribution-NonCommercial 4.0 International License (http://creativecommons.org/licenses/by-nc/4.0/) which permits copy and redistribute the material just in noncommercial usages, provided the original work is properly cited
COMMENTS