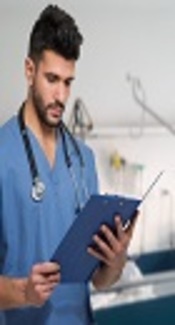 Nurses form the largest group among the healthcare workers and are legally and ethically responsible for the quality of patient care. Given that the performance of standards is one of the important aspects of care of the patients, particularly those undergoing surgery, this study aimed to evaluate the performance of nurses in the care of patients in surgical wards in the hospitals of Kermanshah University of Medical Sciences.

This was a cross - sectional study conducted among all the nurses in the abdominal surgery wards, and the sample size was 30 nurses. The data collection instrument was a researcher - made questionnaire about the standard care of patients after abdominal surgery, and its validity (using expert panel) and reliability (using test - retest) were confirmed. The SPSS software was used for the analysis of the data.

The reasons for the non - performance of standards can be the factors such as the lack of equipment, the low number of nurses, high workload, and lack of motivation. Therefore, it is recommended that studies be conducted on the causes of and obstacles to the performance of these standards.

Surgery is the mainstay of treatment for many diseases and injuries (1). Annually, approximately 72 million surgical procedures are performed in the United States (2). The patients undergo hospitalization for several days and require health services and qualified care to prevent complications and accelerate the recovery process. Quality of health services is the level of access to the most desirable health services so that the provided services are effective, efficient, and cost - effective (3).

Nurses form the largest group among the health workers and are legally and ethically responsible for the quality of patient care (4). In defining quality, the emphasis is placed on two important aspects, “standard of service” and “patient satisfaction.” It can be said that the quality is providing safe services based on nursing standards to the client in such a way that it leads to patient satisfaction (4). Standards can be used as a target to be aimed at and a criterion for assessing patient and nurse safety, saving time and budget, and facilitating decision making. Therefore, the performance of standards can be used to examine how nursing care is being provided.

The nursing care standard determines the minimum nursing competence scales at work so that the quality of care can be measured (5). The standards to be followed after surgery include setting the amount of intravenous fluid for the patient after abdominal surgery taking into account the tests, measuring and recording the vital signs of the patient after surgery at least 4 times a day, early withdrawal of the patient from the bed, enabling mobility in the patients, changing the dressing based on principles of asepsis, fixing the nasogastric tube until the onset of bowel movement, starting a diet for the patient in the presence of bowel sounds, paying attention to the signs of paralysis or bowel obstruction, training the patients at the time of discharge, measuring the secretions in the drains of the patient, putting the patient in a proper position, paying attention to the symptoms of the dumping syndrome, etc. (6).

The performance of standards in patient care after surgery can prevent complications such as pneumonia, hypoxia, deep vein thrombosis, infection, pulmonary embolism, and wound opening or its protuberance and can reduce the costs and duration of hospitalization (6). In contrast, the lack of performance of standards would increase the costs, bed occupancy, and complications after abdominal surgery. Therefore, in this study, we investigated the performance of the nurses in the provision of proper care to the patients, which we hope will help the health of the patients.

This was a cross - sectional study. The study population included all the nurses of the abdominal surgery wards of the educational and therapeutic centers of Kermanshah (Imam Khomeini, Imam Reza, and Taleghani hospitals). Due to the limited number of nurses working in these wards, all of them were selected based on consensus (12 nurses in Imam Reza, 8 nurses in Imam Khomeini, and 10 nurses in Taleghani Hospital). The data collection tool was a researcher - made questionnaire which included demographic information and performance of nursing standards after abdominal surgery. It included 18 questions regarding the standards. The study was single - blinded and completed by a researcher observing the performance of the nurses. These 18 questions were about the standards that nurses had to perform after abdominal surgery, and the response options were yes, no, and somewhat.

After verifying the face and content validity of the tool by 10 faculty members of Tarbiat Modares University, its reliability was confirmed using the test - retest method, and the internal correlation coefficient was measured in a sample of 20 nurses. The Cronbach’s alpha coefficient was 0.81, and the Spearman coefficient was 0.84. The data were collected by the researcher and categorized using descriptive statistics. The data were analyzed using SPSS version 16. The ethical considerations in this study included obtaining written consent from the study participants and maintaining the confidentiality of the information collected.

The mean number of beds in the surgical wards was 39 beds. Table 1 shows the standard care provided by the nurses after abdominal surgery.

Performance of standards in patient care is necessary to prevent complications of surgery and reduce costs and duration of hospitalization. Our findings showed that the lowest standard performance in the surgical wards was for relieving pain by administering the drug using an infusion pump, and the highest standard performance was for dressing based on the principles of asepsis, which has been emphasized in studies and is one of the ways to prevent infection. Pain relief by using the infusion pump, which had the lowest level of nursing performance, could be due to the lack of equipment and lack of awareness among nurses regarding the use of this method as the most appropriate method of pain control in patients after abdominal surgery.

Pain is one of the most commonly diagnosed problems in nursing, especially in the surgical wards. Despite the evidence for proper control of pain, adequate pain relief still remains a problem. Poor relief of pain can cause adverse effects on the cardiovascular system and may lead the patient to tolerate chronic and prolonged pain. Nurses play an important role in evaluating and controlling the pain in patients (7).

Our study showed that the standard with the lowest rate of performance was the use of an infusion pump for administering analgesics to relieve pain in the patients. Tabassi et al. in their study entitled “The study of the effect of acupuncture on the pain after inguinal surgery” showed that lesser availability of opioids in the surgical wards for use with the infusion pump caused postoperative pain in many patients and the worst memory of hospitalization in the surgery wards (8). By taking proper nursing measures and analgesics, these can be greatly reduced.

Also, in another study conducted by Tavakoli et al. entitled “Satisfaction rate of postoperative pain relief in educational hospitals in Kerman,” the results showed that 24 hours after surgery, most patients were completely dissatisfied with the pain relief, and others had poor or moderate satisfaction (9). Therefore, it is important to use an infusion pump to relieve pain after abdominal surgery.

One of the high - performance standards in the surgical wards was the change of dressing based on the principles of asepsis. Rajaei et al. (2007) concluded in their study that dressing after a clean surgery after the first 48 hours had not an effect on the wound infection, and in the non-dressing group, the anxiety was reduced (10). Therefore, removal of the wound dressing after the first 48 hours of dressing is recommended for clean surgeries. Changing the dressing after 48 hours in the surgical ward is not important, and more attention should be paid to other standards.

Another standard that should be performed in patients with abdominal surgery is the initiation of oral nutrition, which was performed in 50% of the cases in our study. In the study by Adeli et al. (2013), the comparison of the consequences of starting feeding 4 and 12 hours after cesarean section was assessed. The authors concluded that the severity of abdominal distention 24 hours after cesarean section was less in the study group; also, the return of bowel sounds, expulsion of gas, and bowel movements were less in the study group; the severity of pain decreased, and there was no difference regarding wound infection (11). Also, Aslanabadi et al. (2011), studied the early onset of oral nutrition in children who underwent intestinal anastomosis and showed that early nutrition decreased the time to onset of intestinal movements and reduced the duration of hospitalization (12). Therefore, it is recommended that this standard be considered important.

Training at the time of hospital discharge was performed by only 46% of the nurses. Lemos et al. in their study entitled “Patient satisfaction on the day after surgery” showed that the respiratory training is often not fully completed, and 25.5% of the patients were dissatisfied with the training on the first day and 37.6% on the 30th day after the discharge, which indicated that the information obtained during discharge was not sufficient for the patients (14). Considering that education leads to the increased ability of the patients for self - care and, thus, improves health and prevents diseases, this standard is one of the main duties of the nurses for the promotion of community health (15).

In this regard, Toloei et al. (2006) showed that the factors such as job security, work conscientiousness, awareness, interest in work, recognition and appreciation, career advancement, and promotion increase nurses’ motivation to perform the standards (16). In the field of patient education, Haddad’s study showed that the most important barrier to patient education in the field of management was the lack of motivation among the nurses. Other barriers include the low number of nurses working in the wards, large volumes of work, and consecutive shifts (17).

Our findings showed that the lowest standard performance was in the surgical wards for relieving pain by administering the drug using an infusion pump, and the highest standard performance was for dressing based on the principles of asepsis. The reasons for the non - performance of standards could be factors such as the lack of equipment, the low number of nurses, high workload, and lack of motivation. Therefore, it is recommended that further be conducted on the causes of and barriers to performance of these standards.

Therefore, considering the issues presented by the current study results, the following are suggested:

The authors would like to thank those who contributed for implementation of this study especially research deputy of Tarbiat Modares University. This study was extracted from MSc thesis with code 1105734.

Copyright © 2018, Kermanshah University of Medical Sciences. This is an open-access article distributed under the terms of the Creative Commons Attribution-NonCommercial 4.0 International License (http://creativecommons.org/licenses/by-nc/4.0/) which permits copy and redistribute the material just in noncommercial usages, provided the original work is properly cited
COMMENTS