The Effect of Circuit Resistance Training on Plasma Concentration of Endothelin-1, Nitric Oxide and Vascular Diameter in Elderly Men 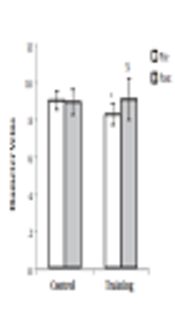 aging is associated with an increase in vascular dysfunction but it can be prevented by exercise training. However, the effect of circuit resistance training as a useful training method in improving cardio-respiratory and muscular strength is unclear.

The aim of this study was to investigate the effect of CRT on plasma endothelin-1, nitric oxide (NO) and vascular size in aged men.

Circuit resistance training as a proper training method could induce the increase in endothelial function in aged individual and prevents vascular dysfunction related to aging.

In industrialized countries, vascular diseases such as myocardial infarction, heart attack, and obesity become more prevalent with age (1). The prevalence of these diseases is associated with increased activity of the endothelial system during aging (1). At endothelial level, aging is associated with increased endothelial cell disorders, decreased endothelium-dependent vasodilation, increased endothelium-dependent vasodilatation, and decreased nitric oxide activity (2). Endothelin-1, an endothelium-derived vasoconstrictor, affects the function of various tissues such as the heart, pancreas and the nervous system (3). Endothelin causes increased vascular contraction, increased cell proliferation, blood coagulation, and inflammation (4) and is associated with the development of atherosclerosis and increased blood pressure with aging (5, 6) which can play an important role in disease and aging processes. However, increase in other substrates can inhibit the harmful effects of endothelin-1. Nitric oxide is one of these inhibitors which acts as a vasodilator and anti-inflammatory and anticoagulant substrate (7). The imbalance between nitric oxide and endothelin-1 plays a role in the pathology of renal and pulmonary and previous diseases (5).

The purpose of this study was to investigate the effect of circuit resistance training on endothelin-1 and nitric oxide plasma concentrations in the elderly.

The population of this study was elderly volunteers. They were selected through call in public and administrative centers. Twenty healthy elderly men with an average age of 55 years were randomly divided into two control and circuit resistance training groups. Then, after measuring 1 maximum repetition, the resistance training group performed 10 movements (bench press, pec deck flys, barbell curls, low pulley curls, pushdowns, back lat pulldowns, seated rows, leg extensions, lying leg curls and, angled leg press) with the intensity of 40% - 65% 1maximum repetition 3 sessions per week for 3 months. The control group continued their routine daily activities during the three-month study period. The vascular diameter was measured 48 hours before the exercise program and 48 hours after the last training session using the SUN Doppler method. To perform sono-doppler, every participant was laid flat to the back on the bench with hand located beside the body and a qualified cardiologist performed the test using a 5 - 13 MHz (linear) multi-frequency probe. Blood samples were collected from the brachial vein before and 48 hours after the last training session, and after plasma isolation, the samples were stored at -20°C for measuring levels of Endothelin-1 and nitric oxide. The results of intra-group analysis in circuit resistance training group showed that, compared to the pre-test, exercise significantly increased vascular diameter (P = 0.021), and decreased endothelin-1 (P < 0.001), and systolic blood pressure (P < 0.001); however, it has no significant effect on plasma concentration of nitric oxide, diastolic blood pressure and heart rate (P < 0.05) (Table 1 and Figure 1).

Elderly is not a disease, but is a biological process associated with changes and problems in the body, including cardiovascular disease, hypertension and coronary artery problems (18). In general, inappropriate performance of endothelial cells has been observed to be associated not only with diseases such as high blood pressure, high cholesterol, and atherosclerosis but it is also associated with age. Vascular endothelial cells play an important role in regulating vascular activity by producing vascular activating agents, such as endothelin-1 and nitric oxide (19). Endothelin-1 is the strongest vascular vasoconstrictor, that its contractile effect is ten times higher than angiotensin-2, vasopressin and neuropeptide Y. It acts through two receptors A and B that located in the membrane of the cell (19). In relation to the effect of physical activity on endothelin-1, it has been determined that exercise increases endothelin B receptors in smooth muscle and ultimately bronchial contraction. Also, endothelin B receptor in endothelial cells leads to vasodilatation by increasing nitric oxide. Type A receptors are found mostly in cardiac muscle and vascular smooth muscle, and the main mediator of vascular contraction is by endothelin, while type B is found in the kidney, uterus, central nervous system and vascular endothelial cells, and Its stimulation produces nitric oxide (20). Various factors contribute to the production of this index various factors in the production of this index include rheological and neurohumorrhagic factors which these factors are also affected by exercise. Endothelin-1 produces nitric oxide and eventually artery vasodilatation with effect on type B receptors (19).

In addition, it has been reported that exercise lowers vascular tone induced by endothelin-1 (22). In this study, the plasma concentration of nitric oxide increased but not significantly. One of the reasons for lack of change in nitric oxide can be due to a significant decrease in endothelin-1 since these two substrates are opposed to each other. Given that decreased endothelin-1 lowered its contractile effect on the arteries, there was no need for a compensatory mechanism to increase nitric oxide for vasodilatation. The decrease in endothelin-1 was also associated with a reduction in systolic blood pressure. Hence, with a reduction in endothelin-1, vascular smooth muscle might have returned to their resting condition, resulting in a reduction in systolic blood pressure. Research has also shown that circuit resistance training, especially when light weights used (40% - 60% 1MR), are useful for controlling body weight (17). In addition, during circuit resistance exercises, heart rate, metabolic cost, and energy consumption are higher than those in traditional resistance exercises (26) and can be a desirable exercise strategy to increase cardiovascular fitness and strength (17). Results of this study showed that circuit resistance training can increase vascular diameter and thereby contribute to increased cardiac respiratory endurance.

The major mechanism of the main changes of the effect of vascular training is not clear, but it has been shown that 12-week circuit resistance training reduces arterial stiffness without altering blood pressure in the elderly (27). Previous studies have reported that changes in the endothelium of arteries are due to chronic changes in endothelium- and nitric oxide-induced blood flow (28, 29). As the current study showed, the reduction of arterial stiffness due to exercise was because of an increase in vascular diameter and a decrease in endothelin-1 concentration, which reduces its contractile effect. In addition, it has been shown that muscle fibers affect the sensitivity of endothelin-1 so that aging is associated with a decrease in endothelin sensitivity in fast twitch fibers (20). In the current study, the resistance type of exercise was used that could have a positive effect on increasing fast contractions. Therefore, in this study, the increased sensitivity of endothelin-1 is one of the reasons for the decrease of endothelin concentration, but this finding requires more research because due to limitation, the percentage of the fibers were not examined in this study.

In this regard, Thijssen et al. In relation to the role of endothelin-1, on the contraction of the elderly's leg arteries, showed that increasing the cross-sectional area in leg vascular contraction with age, partly done by endothelin. Also 8 weeks of bicycle training in elderly people without mobility reduced leg vascular contraction and somewhat decreased endothelin-1 (22). In examining the decrease in the diameter of the blood vessels with endothelin-1 and its increase with age in healthy people and reducing it by exercise, Van Guilder et al. found that endothelin-1 increased blood pressure by decreasing vascular diameter; This index increases with age and decreases due to the regular aerobic exercise activity (36).

In one study on the effects of short-term leg resistance training on arterial performance in older men, artery stiffness did not change with resistance training, and plasma nitric oxide concentration increased after these exercises and no changes in endothelin-1 plasma concentrations were observed (14). The exact mechanism for reducing endothelin-1 plasma after exercise resistance is uncertain. The regulation body tropical hormones by physical activity or changes in body weight and total fat mass, as well as increased strength and power of skeletal muscle around blood vessels, is likely to reduce the body's need to the vascular endothelial cells to function, as a result, the secreted material of these cells in the plasma also decreases (15, 37).