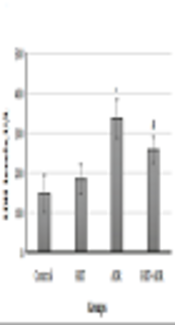 Adriamycin (ADR) is a useful drug for the treatment of hematologic malignancies and solid tumors. However, its clinical uses are limited due to dose-dependent cardiac toxicity. Contrary to moderate endurance training, there is little research about the protective role of high-intensity aerobic interval training (HIIT) against the ADR-induced cardiac toxicity and its mechanisms.

The present study aimed to investigate the protective effect of HIIT against ADR-induced cardiac toxicity in the left ventricle of rats by assessment of the serum biomarkers of cardiac injury (LDH and CK-MB).

Therefore, the HIIT can be a proper non-prescriptive strategy for preventing ADR-induced cardiotoxicity via reducing the serum biomarkers of cardiac injury.

Adriamycin (ADR), as one of the most common anticancer anthracyclines, is used widely to treat hematologic malignancies and solid tumors such as acute leukemia, bone/soft tissue sarcoma, and many other malignant neoplasms (1). However, its prescription has been limited due to cardiac toxicity (irreversible dose-dependent cardiac damage), during or even years after the treatment (2). Although the molecular mechanisms of ADR-induced cardiac toxicity are not yet fully understood, excess production of reactive oxygen species (ROS) and mitochondrial dysfunction have been suggested as well-accepted mechanisms (3). The level of ADR-induced ROS production in the heart tissue is ten-fold higher than that in other tissues such as liver, kidney, and spleen, which shows the sensitivity of heart tissue to this drug (4).

The cardiac biomarkers are released into the bloodstream when the heart is damaged (2). Of the many enzymes used for the detection of cardiac dysfunction, lactate dehydrogenase (LDH) and creatine kinase (CK) have gained wide clinical approval (1, 2). The results of various studies have shown that the serum biomarkers of cardiac injury increase following ADR-treatment in the blood (5, 6). In one study, Venkatesan examined the effect of intraperitoneal (i.p.) injection of ADR (30 mg/kg.bw) on cardiac enzymes in rats, and stated that the serum levels of CK-MB and LDH were significantly increased compared to the control group (5). Also, Shirinbayan and Roshan reported that ADR-induction led to an increase in the serum level of biomarkers of cardiac injury, including LDH, CK-MB, troponin-I (cTnI), alanine aminotransferase (ALT) and aspartate aminotransferase (AST) in rats (7). Therefore, the primary diagnosis of ADR-induced cardiac toxicity could provide the proper prevention strategy (2, 8).

Older cancer patients often die of heart failure during the ADR-treatment, while child cancer survivors live long enough to face the long-term cardiac toxicity consequences (3). More than a quarter of ADR-treated patients have died of the cardiovascular diseases (9). Therefore, different strategies should be taken to prevent ADR-induced secondary cardiovascular side-effects. Moderate endurance exercises, as one of the proper protective strategies, can protect the heart against the ADR-induced cardiac toxicity (10, 11).

Furthermore, high-intensity aerobic interval training (HIIT), including repetitive periods of high-intensity training with periods of rest or low-intensity training (12), has a positive effect on the cardiovascular system in patients (13). HIIT can improve the stability of cardiomyocytes energy metabolism in patients with chronic heart failure via upregulation of the AMPK pathway (14). Also, recent research has suggested that cardiovascular adaptation associated with HIIT in some cases is more than that of moderate endurance exercises (15). For instance, the HIIT-induced VO2max development is twice as high as that of endurance exercise (16). It has been shown that HIIT prior to and during ADR-treatment could reduce cardiovascular side-effects by increasing the antioxidant enzyme content in the rats’ heart tissue (17). However, few articles have addressed the protective role of HIIT against the ADR-induced cardiac toxicity and its cellular mechanisms.

The purpose of this study was to investigate the protective effect of HIIT against ADR-induced cardiac toxicity in the left ventricle of rats by assessing the serum biomarkers of cardiac injury (LDH and CK-MB).

Twenty-four male Wistar rats (3 weeks old) were purchased from the Laboratory Animal Research Center of Tabriz University of Medical Sciences. In order to adapt to the new environment, the rats were kept for a week at room under controlled temperature (of 21 ± 2°C) with free access to food and water under the 12-hour light/dark cycle. All rats were initially familiarized with a rodent’s treadmills (3 sessions, 10 m/min, 15 minutes) before randomization (Table 1). Then, the animals were divided into one of four groups randomly (n = 6 per groups): (1) sedentary control (control), (2) sedentary adriamycin-treated (ADR), (3) exercise trained (HIIT), and exercise-trained, treated with ADR (HIIT + ADR). All experimental procedures were reviewed in Research Ethics Committee of Sport Sciences Research Institute and were approved according to Ethics Standards in Research of the Ministry of Science, Research and Technology, (IR.SSRI.REC.1397.311).

Exercise protocols were developed based on a previous study (18). Breifly, HIIT was performed 1 hour/day, 5 days/week for 8 weeks in the morning from saturday to wednesday. HIIT protocol included three steps: (1) Warm-up: 10 minutes warm-up with 50% - 55% VO2max, (2) Main body: 7 sets of intervals with 4 minutes at 80% - 90% VO2max interspersed with 3 minutes periods of 65% - 75% VO2max, (3) cool-down: 1 minute cool down period with 50% - 55% VO2max. Because we did not have instruments such as respiratory gas analyzers for estimating VO2max directly, we indirectly estimated the intensity of animal exercise according to the speed of movement at the beginning of every 2 weeks (there is a strong correlation between the running speed and VO2max) (19).

Immediately after the last HIIT session, animals received a cumulative dose of ADR hydrochloride (20 mg/kg.bw, i.p.). Groups without ADR-treatment received a similar amount of saline. Seventy-two hours after ADR or saline-injection, each rat was anesthetized using an i.p. injection of xylazine-ketamine combination (90 and 10 mg/kg, respectively). Blood samples were taken directly from the left ventricle of the rats and immediately centrifuged at 3000 rpm for 10 minutes. Afterward, serum was separated from the plasma and kept at 70°C for measuring LDH and CK-MB levels. The LDH and CK-MB levels, indicators of cardiac damage (20), were measured using spectrophotometric procedures with available kits (Roche Diagnostics, Germany) according to the manufacturer’s instructions. The enzyme values are reported as U/L.

The results of this study are similar to those reported by previous researchers (19, 20) that ADR-induction leads to cardiac toxicity along with the increased levels of cardiac injury biomarkers in rats. Consistently, Venkatesan stated that ADR-treatment led to an increase in the serum levels of CK and LDH in rats (5). Yagmurca et al. also noted that the activity and levels of AST, LDH and CK-MB, as well as the heart rate and blood pressure were significantly increased in the mice treated with acute ADR-injection (20 mg/kg.bw i.p.) compared to the healthy animals (18). Another study by Pizarro et al. revealed that chronic ADR-induction led to a 50% increase in the serum LDH levels and cardiomyocytes necrosis after 24 hours of treatment (21). Also, Nimbal and Koti who studied the effect of some kinds of vitamin supplements on ADR-induced cardiac toxicity reported that acute ADR-induction results in a significant increase in the serum LDH, CK-MB and cTnI levels (22). Mantawy et al. also stated that chronic ADR-induced cardiac toxicity (15 mg/kg.bw i.p.) resulted in a significant increase in the serum LDH and CK-MB levels in rats (23). In agreement with our results, a significant increase was observed in the serum levels of LDH and creatine phosphokinase (CPK) in rats after 72 hours of the ADR-tratment (chronic injection, 10 mg/kg.bw i.p.) (24).

Notably, HIIT could also prevent heart damage. For example, studies suggest that HIIT could protect the heart against ischemia reperfusion (IR) injury by reducing the plasma LDH and CK-MB activity, as well as the myocardial infarct size (28). Furthermore, HIIT, compared to the endurance exercise, resulted in a similar or even greater improvement of cardiovascular system in patients (29-31). However, there are few studies about the preventative role of HIIT against the ADR-induced cardiac toxicity. Recently, Jarrett et al. revealed that HIIT before ADR-treatment could protect the heart via increasing the antioxidant enzyme content (17). This finding is also in agreement with our result that eight weeks of HIIT could protect the heart against the ADR-induced cardiac toxicity by decreasing the serum levels of LDH and CK-MB.

There is strong evidence that HIIT triggers higher metabolic signaling (accumulation of intracellular lactate production, AMP, ADP, AMPK, as well as the reliance on carbohydrate oxidation) than moderate intensity endurance training (32). Nevertheless, the molecular mechanisms of the protective effect of HIIT against the ADR-induced cardiac disorders have not been thoroughly investigated. It has been reported that HIIT after heart failure could improve cardiac function by inhibition of ADR-induced changes in the mitochondrial dynamics and biogenesis, antioxidant content, AMPK, and ERK1/2-JNK-P53 signaling pathways (33). ADR-treatment is reported to increase ROS content (34) and bioenergy metabolism impairement (by AMPK signaling inhibition, and mTOR signaling activation) in cardiomyocytes (35). Wang et al. have shown that HIIT per se could upregulate the energy metabolism of cardiomyocytes, and thereby improve the energy production in patients with chronic heart failure (14). Therefore, antioxidants, mitochondrial dynamics, biogenesis, and AMPK signaling pathways could be the potential molecular mechanisms of HIIT in protecting cardiomyocytes against the ADR-induced toxicity.

Cardiac toxicity due to chronic induction of ADR (20 mg/kg.bw i.p.) in rats is associated with a significant increase in the serum biomarkers of cardiac injury after 72 hours. However, HIIT prior to ADR-induction can lead to a significant decrease in the serum levels of LDH and CK-MB. Therefore, HIIT can be a proper protective strategey against ADR-induced cardiac toxicity.