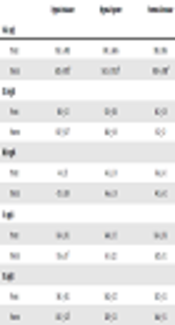 The present study was conducted to investigate the effects of eight weeks of resistance training in different environmental conditions on arterial factors in overweight men.

The present study was conducted in Kermanshah, Iran, on thirty overweight males with a mean body mass index (BMI) of 27.4 ± 1.57 kg/m2, who voluntarily participated in this study. The subjects were randomly divided into a hypoxic and a normoxic resistance training group and a hypoxia exposure group, and performed the training protocols for eight weeks. Vascular endothelial growth factor (VEGF), high density lipoprotein (HDL), low density lipoprotein (LDL), total cholesterol (TC) and triglyceride (TG) were measured before and after performing the intervention.

Atherosclerosis is a pathologic condition that directly affects obesity and overweight, and is associated with the thickening of the inner layer of vessels caused by fat deposits and platelets (1). The progression of atherosclerosis disrupts the blood supply to the brain and other organs (2). A major function of vascular endothelial cells is the secretion regulation of growth factors such as VEGF, which plays a key role in the process of blood supply and angiogenesis, and is negatively correlated with obesity and atherosclerosis (3). Research suggests that stimulants such as hypoxia and training can increase the stimulation of VEGF (4), and the shear stress due to blood flow is a major cause of endothelial vascular endothelial growth factor (VEGF) secretion (5). Obesity reduces the vascular endothelial function, and is associated with impaired mechanisms, including lipid metabolism and hypertension (6). A review study demonstrated correlations between the femoral arterial thickness and factors involved in atherosclerosis, including ankle-brachial index (ABI) and cholesterol (7).

The present research was therefore performed to evaluate and compare the effects of eight weeks of hypoxic and normoxic resistance training and hypoxia exposure on arterial factors in overweight men.

Thirty overweight none-athletic males in Kermanshah voluntarily participated in the present study. The subjects had no history of cardiorespiratory diseases and had not gone to altitudes of over 2500 meters in the two months prior to the intervention. They also visited the research laboratory of the Faculty of Physical Education of Razi University in Kermanshah two days before the intervention to get familiar with the study procedure, 1RM and demographic measurements. In addition, informed written and oral consent was obtained from all the subjects, and they were informed of any potential risks associated with the experiments.

The subjects participated in 24 sessions of training protocols and hypoxia exposure, three sessions a week. The subjects were randomly assigned to three groups, namely hypoxic resistance, normoxic resistance and hypoxia exposure, the day they visited the laboratory. The maximum repetition of resistance was determined for squat and lunge using submaximal repetitions up to fatigue as follows (14).

The levels of VEGF, LDL, HDL, TG and TC were measured one day before and two days after the eight-week intervention.

The subjects were placed in a sitting position breathing for twenty minutes using a mask attached to a Douglass Bag (Australian, model: Model ERA II GO2 Altitude) and filled with 14% oxygen. A pulse oximeter (Nonin Medical INC.Plymouth MN USA) was used to monitor arterial blood saturation in each subject from the beginning to the end of the intervention. The minimum arterial blood saturation was found to be 75% for continuous exercise or hypoxia exposure. In case the oxygen saturation dropped below this threshold during the intervention, or the subjects suffered breathing difficulties and dizziness, they were prevented from continuing the task.

Seven ml of fasting blood samples were collected between 8 am and 10 am one day before and two days after the intervention. VEGF levels were measured using ELIZA kits (Boster Biological, sensitivity of 1 pg/Ml >, made in USA), HDL, TG and TC using Pars kits, and LDL using the Friedwold formula.

To investigate the research hypotheses, the dependent t-test was used for normally-distributed data and Wilcoxon, Kruskal-Wallis and Mann-Whitney U tests for the data with a non-normal distribution. The data collected were analyzed in SPSS-22.

Table 1. The Pre-Test and Post-Test Results Associated with VEGF, HDL, LDL, TG and TC in All the Groupsa

The present study showed a significant increase in HDL and significant reductions in LDL, TG and TC in the hypoxic resistance group, although it did not suggest any changes in lipid profile in the hypoxia exposure and normoxic resistance training groups. Both significant improvements and no changes in lipid profile have been reported in literature (14, 15). Evidence shows that the intensity, duration and volume of exercise affect the changes in lipid profile. Moreover, a minimum duration of eight weeks has been proposed for exercise to affect lipid profile, whereas the majority of researchers using protocols based on below eight weeks of training did not report significant changes (15). Compared to previous studies on resistance training protocols, the present research focused only on two types of training, i.e. lunge and squat. The low volume of exercise can explain the lack of changes in lipid profile obtained in the normoxic resistance exercise group. Investigating the effect of hypoxia exposure on lipid profile in patients with coronary heart disease showed that intermittent hypoxia significantly improves lipid profile after 22 sessions (3 hours per day) (25), which is inconsistent with the present study that reported no significant changes, as the subjects were exposed to hypoxia for only 20 minutes each session. Evidence suggests the critical role of HIF-1 in regulating the metabolism of carbohydrates and fats. In addition, using fat as a substrate required for metabolism has been observed in hypoxia conditions (26).

Normoxic and hypoxic resistance training and hypoxia exposure generally increased the level of VEGF. Hypoxic resistance training also significantly increased lipid profile. Hypoxia can therefore be proposed as a more prominent factor in terms of improving the arterial function. Exercises under hypoxia conditions and their effects on the arterial function have rarely been addressed in literature. Numerous discrepancies observed in the obtained results can be explained by the differences in the intensity and duration of trainings or the type of exercise. Overweight subjects at risk for cardiovascular diseases can generally prevent the disease by employing appropriate training protocols. Optimal training programs are therefore recommended to be provided for these individuals.

The authors would like to express their gratitude to all the study participants and the authorities of the Faculty of Physical Education at Razi University, who helped conduct the present research project. The present article was extracted from a Ph.D. dissertation on sport physiology, and the authors declare no sponsorship.