How to Cite: Ghanbari-Niaki A , Saeidi A, Tartibian B, Qujeq D , Naghizadeh Qomi M . The Response of Brain Kisspeptin and Glycogen at Different Times to Acute Aerobic Exercise with and Without Glucose Solution Consumption in Male Rats. J Clin Res Paramed Sci. 2018;7(2):e85193.
doi: 10.5812/jcrps.85193. 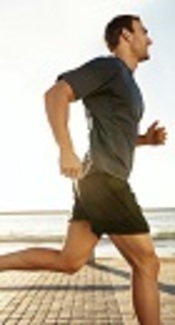 Kisspeptin refers to peptides involved in appetite regulation and responds to energy-decaying agents. The aim of the current study was to survey brain response of kisspeptin and glycogen at different times to acute aerobic exercise with and without glucose solution consumption in male rats.

No significant difference in brain kisspeptin was seen with time, between groups, and for interaction between time and group (P > 0.05). Tissue glycogen analyses showed significant changes between the groups (P < 0.001).

The results of this study showed that brain kisspeptin did not respond to stress and disruption of energy balance and did not relate to the reduction of tissue glycogen in the brain.

Research studies in the field of peptides involved in the balance and adjustment of energy demonstrate that destructive changes in intracellular energy are controlled centrally and environmentally (1). A deeper view of the effective compensatory mechanisms occurring in response to the withdrawal of cellular energy balance in various conditions reveals changes in the peptides which affect appetite, such as NPY, AgRP, orexin, galanin, GABA, nisfatin, visfatin, obestatin, ghrelin, and leptin, and play primary roles centrally and environmentally (2-5). Recently, a peptide called kisspeptin has been identified, which despite its relationship to reproduction, responds to nutritional changes, for instance, fasting, puberty, pregnancy, menopause, stress, and physical activity. Studies on fasting rats suggested that hypothalamic kisspeptin plays a major role in inhibiting the effects of nutritional status and acts as an energy sensor (6, 7). Fasting reduces the expression of KISS-1 mRNA, which is associated with a reduction in circulating leptin (8, 9).

Kisspeptin and its receptor in the brain are primarily expressed in the hypothalamus and pituitary gland (11). The expression of kisspeptin decreases in the presence of leptin deficiency (12). The injection of leptin reduces appetite and increases the expression of kisspeptin (13). It has been reported that kisspeptin neuropeptide mRNA levels drop following severe nutritional restriction in rats (6). Since physical activity is known to disrupt energy balance, there is a fall in the energy reserves of the body, such as glycogen, in various tissues including the brain which is one of the main tissues that secretes kisspeptin. A question that arises is, does kisspeptin respond to a disturbance of brain energy balance after an acute endurance activity? Therefore, the aim of the current study was to survey brain response of kisspeptin and glycogen at different times to acute aerobic exercise with and without glucose solution consumption in male rats.

All the animal experiments were set up in accordance with Iranian conventions policies. It was also approved by the Ethics Committee at University of Mazandarsn. Meanwhile, eighty Wistar male rats (6 - 8 weeks old, 140 ± 10 g weight) were bought from Pasteur Institute of Iran and placed in the Central Animal House in Faculty of Physical Education and Sports Science of UMZ. The subjects were divided 5 in each cage (46 L) at normal dark light cycle. The temperature and humidity were maintained at 22°C ± 1.4°C and 50% ± 5%, respectively. Diet (in pellet form) and water were provided ad libitum. The animals were in the specific age and weight range, and any inability to adhere to the exercise protocol was considered as an exclusion criterion.

Immediately after the exercise, the supplemented groups of rats were given oral glucose solution. D-glucose, purchased from Merck Co., was dissolved in distilled water. The dosage used was 6 mg/g of body weight as 33% solution (15). The saline groups were hydrated immediately after training.

The rats were anesthetized by intraperitoneal injection of ketamine and xylazine while they were fasting for three hours (water was available). The brain tissue was separated and transferred to microtubes that were kept in liquid nitrogen and then stored at −80°C for later assessment. All the experimental procedures including laboratory measurements and training and sacrificing the animals were performed in the morning time between 8 − 11 a.m. in the University of Mazandaran. The tissues were transported to a Chinese oven and homogenized with powder. Kisspeptin was quantified in the brain samples by ELISA. Kisspeptin 1 levels were measured by Eastbiopharm rat kisspeptin ELISA kit (cat number: CK-E90458) according to the manufacturer’s instructions. A tiny slice of the brain tissue was collected to measure glycogen. Brain glycogen was measured by the indirect anthrone reagent method (16).

The normal distribution of the data was determined using the Kolmogorov-Smirnov test and Levene test for homogeneity of variance. Next, independent t-test was used for determining the intergroup difference between the two groups, before and immediately after the training. Two-way ANOVA test was used to compare the saline and glucose groups at different times and the interactions between them. One-way ANOVA test was used to detect any difference between the saline and glucose groups separately. The LSD test was also used. The significance level of the tests was considered as alpha = 0.05.

Kolmogorov-Smirnov test and Levene test showed that all the data were normally distributed and had homogeneous variance (P > 0.05). 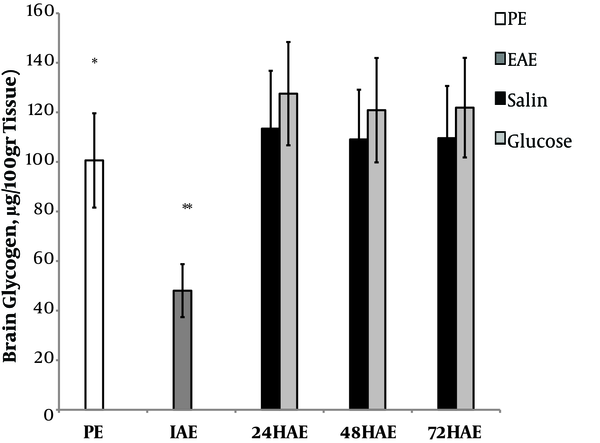 Independent t-test showed a significant difference in brain kisspeptin between the two groups before and immediately after training (P = 0.793).

One-way ANOVA test showed that there was no significant difference between the saline groups and the group immediately before and immediately after training (P = 0.383).

One-way ANOVA test between the glucose groups and the group before and immediately after training did not show a significant difference (P = 0.367) (Figure 2). 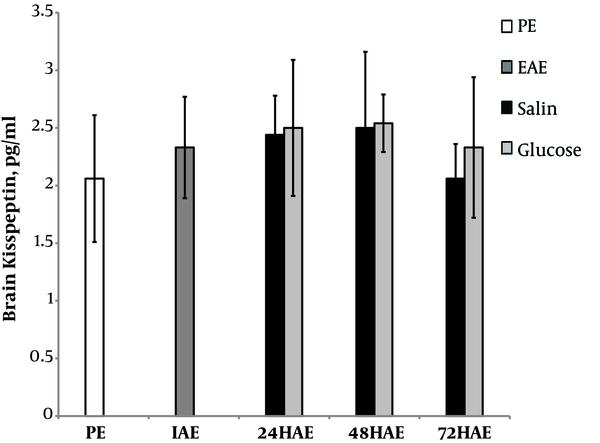 The present study showed that kisspeptin in the brain tissue did not respond to physical training, and change of energy balance did not significantly affect kisspeptin in the brain. Atkinson introduced the theory of energy charging in 1997. Based on this theory, the absolute amount of ATP in the cell depends on the adenylate stores of the cell. So the charging cell maintains its energy under different conditions. The energy charge in the brain is 0.85 - 0.95. Therefore, it is observed that brain has a higher energy charge than other tissues. The energy charge declares that there is little change in the daily rhythm in ATP cells, and the energy charging of cells during physical activity, fasting, and so on remains relatively constant.

Although the turnover of ATP is very high during exercise, the body quickly replaces the ATP stores and does not allow a lot of changes and drops (17). One of the possible reasons for the absence of a significant alteration in the amount of kisspeptin following the long-term training is that the kisspeptin synthesizing neurons are located in two main regions of the hypothalamus, the periosteum region and the arc nuclei (18). This study of kisspeptin changes induced by energy imbalance due to exercise was measured in the entire brain instead of the hypothalamus itself. Other reasons may be the intensity and duration of the exercise training.

After depletion by exercise, muscle glycogen synthesis occurs in a two-phase manner. In the first step, there is a fast, independent of insulin glycogen synthesis, which is between 12 and 30 μM/g water per hour, lasting for 30 to 40 minutes (19). This step, however, is only being activated after muscle glycogen stores are gone considerably, and in the glucose availability condition. In the second stage, which is dependent on insulin, the amount of glycogen synthesis is reduced by 2 to 3 micromoles per gram of water weight per hour in normal conditions (19). However, carbohydrate supplementation can increase the amount of synthesis as a concept, in a slow phase (20), and if the supplement is maintained periodically, it can ultimately lead to a higher natural glycogen or more compensated glycogen (21, 22).

An exercise-induced increase in the glycogen synthase activity catalyzes the fast renewal of glycogen only if sufficient substrate is available. Hence, an essential cellular modification that enables fast increase in muscle glycogen after exercise is an increase in the permeability of the cell to glucose (22). In this regard, muscle contraction has an effective and prolonged effect like insulin on muscle permeability to glucose (24, 25). This is simply because of a prolonged proliferation of glucose transducers in the plasma membrane (22). Increasing the concentrations of glucose transporters is due to muscle contraction activity, however, it takes over 30 - 60 minutes , this is because glucose concentration from plasma membrane decreases ultimately in the absence of carbohydrate supplements (22, 25, 26). Therefore, increasing the permeability of membrane to glucose, all together with glycogen synthase activation, provides a rapid initial synthesis of insulin-independent muscle glycogen after exercise, which significantly reduces muscle glycogen stores (22, 25, 26).

The second step is glycogen synthesis with a significant increase in muscle sensitivity to insulin. This could increase sensitivity resulting in muscle glucose uptake and more glycogen synthesis accompanied with insulin concentration, which usually has no obvious effect on both processes (22, 25, 26). In addition, this process can be maintained for several days by taking appropriate carbohydrates and so having extra glycogen compensation (22, 25, 26).

The reasons for supercompensation of glycogen include the increase of insulin, the use of glucose solution, and increased activity of glycogen synthase enzymes.

The results of this study showed that brain kisspeptin did not respond to stress and disruption of energy balance in the brain and did not relate to the reduction of tissue glycogen in the brain.

We would like to thank Dr. Azarmeidokht Ghahari, the chief of Babolsar Pathobiology Lab for analysis.