How to Cite: Masoumi S Z , Abdolmaleki E , Khodakarami B, Mohammadi Y . The Pattern and Intensity of Primary Dysmenorrhea in the Students Residing in the Dormitories of Hamadan University of Medical Sciences Between March 2017 and March 2018. J Clin Res Paramed Sci.8(1):e85813.
doi: 10.5812/jcrps.85813. 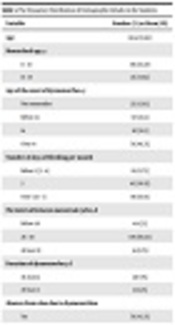 The present study was conducted to investigate the pattern and intensity of primary dysmenorrhea in the students residing in the dormitories of Hamadan University of Medical Sciences, Hamadan, Iran, between March 2017 and March 2018.

The present descriptive cross-sectional study was conducted on a population comprising all the undergraduate students residing in the dormitories of Hamadan University of Medical Sciences. Simple random sampling and a statistical formula were used to select 160 students. The data collected were analyzed in SPSS using descriptive statistics, the chi-squared test and parametric and non-parametric variance analyses.

Given the importance of dysmenorrhea, its effect on women’s quality of life and its inhibitory effects on daily activities, more attention is required to be paid to raising public awareness of the ways of alleviating dysmenorrhea.

Dysmenorrhea or painful menstruation constitutes a common problem in women of reproductive age. Dysmenorrhea is originally a Greek word that describes uterine contractions, and is divided into primary and secondary types (1).

Primary dysmenorrhea is defined as a painful 12 - 72-hour-long menstruation in the absence of provable pelvic diseases that coincides with or precedes menstruation for a few hours (2). The symptoms of primary dysmenorrhea include severe abdominal pains, especially on the midline of the abdomen, which may spread to the back and top of the thighs (3), and are associated with nausea and vomiting (90%), fatigue (85%), lower back pain (60%), headache (45%) and a general sense of illness (4). The pains are usually cyclic and emerge with ovulation six months to one year after the first menstruation (5).

Although dysmenorrhea is not life-threatening, it can affect the quality of life and causes disability, incompetency and inefficiency when the pain is severe (8). Dysmenorrhea can also cause mental problems, isolation and withdrawal in females and prevent them from participating in different social activities (9). Given the current noticeable role of most women in society, they may be absent from work or school for 1 - 3 days a month if this disorder is left untreated (10). Research suggests that primary dysmenorrhea negatively affects women’s concentration and participation in class, their social activities and their general academic achievement. The most common effects of dysmenorrhea on daily life involve the ability to focus and study (75%), changes in physical activities (60%), mental and social health (35%), sleep disorders (26%), absence from school (19%) and hospitalization (3%) (6).

Dysmenorrhea was reported in the US as the most prominent reason for job loss and withdrawal from school. As a common cause of absence from school and workplace, dysmenorrhea was reported, from an economic perspective, to have caused an annual waste of 600 million working hours and 2 billion dollars in the US (11). Given the side effects of dysmenorrhea on performance, especially in young girls, and that females account for almost half of the student population and a major part of the workforce in Iran, appropriate solutions are recommended to be sought to treat this disorder.

The present study was conducted to investigate the status and pattern of dysmenorrhea in the students residing in the dormitories of Hamadan University of Medical Sciences.

The present descriptive cross-sectional study was performed between March 2017 and March 2018. Simple random sampling and a statistical formula were used to select 160 students with primary dysmenorrhea while considering a maximum sampling error of 50% and a confidence level of 95%. The data were collected using demographic and menstruation status questionnaires. Ethical issues considered included receiving a letter of introduction from the university to present it to the subsidiaries, respecting the participants and observing their rights, ensuring the confidentiality of the data and accurately collecting the data.

The questionnaires included demographic information and menstrual details. The McGill pain questionnaire used to evaluate the intensity of menstrual pains classifies dysmenorrhea into three levels of mild (0 - 3.3), moderate (3.4 - 6.6) and severe (6.7 - 10). Han et al. (12) and Younesy et al. (13) confirmed the validity and reliability (r = 0.89) of this questionnaire, which is used to determine the pain intensity on a scale of 0: lack of pain to 10: severe pain. This questionnaire has been widely used in research, and according to Phips and Bick (2003), it is a well-known reliable criterion for pain measurements (14).

One hundred sixty subjects out of all the unmarried undergraduate students residing in the dormitories of Hamadan University of Medical Sciences completed the questionnaires. The maximum and minimum number of participants respectively belonged to the Faculty of Public Health (33.75%) and the School of Nursing and Midwifery (16.25%).

In terms of education level and employment status of the parents, most fathers were employed (69.37%) and had academic education (40%), whereas most mothers were housewife (81.87%) with a high-school diploma (38.75%).

The menstrual details obtained from the second part of the questionnaire were as follows:

The majority of the study girls (28.75%) had a menarcheal age of 14, and experienced painful menstruation after the age of 16. Irregular menstrual cycles were observed in 40 (25%) of the subjects, while 120 (75%) had regular menstruation. The majority also experienced seven days of bleeding in each menstrual cycle, while the interval between their successive periods (the first day of one menstruation to the first day of the next) was 28 days.

Most of the subjects reported a one-day long pain in each menstrual cycle (Table 1).

Table 1. The Frequency Distribution of Demographic Details in the Students

The intensity of menstrual pain caused absence from school in 44.37% of the participants, and the highest frequency of absence was associated with a half-day absence. Analgesics were used by 64% of the students to relieve the pain, and Gelofen by 40.78% as the most frequently-used painkiller. Most of the students (52.43%) used analgesic drug only once a day.

The highest frequency of this disorder was associated to level 2 or moderate dysmenorrhea (42.5%), and the lowest to level 1 or mild dysmenorrhea (27.5%) (Table 2).

The present study found the dysmenorrhea intensity to cause 43.75% of the students to miss the classes, which is consistent with a study conducted in Mexico reporting a 42.1% rate of absence in the students (18). This absence has been differently reported in literature, ranging from 5% in India to 45% in the US (15).

Medicines were used to alleviate menstrual pains by 64.37% of the subjects. The most commonly-used medicines comprised non-steroidal anti-inflammatory drugs and simple analgesics. However, combined oral contraceptive pills were never used by the participants. A study conducted in Canada found 60% of the subjects with dysmenorrhea to have used painkillers, mainly including simple analgesics, non-steroidal anti-inflammatory drugs and contraceptive pills respectively (20), which is consistent with the present results. In line with the present research, Amiri Farahani et al. found Gelofen and Mefenamic to be respectively the most commonly-used painkillers (21).

The present study limitation included using a pain measurement criterion. The pain intensity cannot be measured given that pain is a mental and abstract phenomenon for which specific thresholds can only be defined based on the perception of the individuals involved. Different factors affect the pain intensity, including exercise, socioeconomic status and nutrition. In terms of these effects, the present findings cannot be generalized to all young females. Furthermore, the authorities are recommended to pay more attention to nutrition in students. Given that women play the key role of future mothers and are considered part of the society’ workforce, gyms equipped with the necessary facilities are recommended to be established in student dormitories.

The results showed high mean levels of dysmenorrhea in most of the students. Paying attention to this problem as a potential effect on learning is therefore crucial in universities.

The authors would like to express their gratitude to all the authorities and the students who patiently helped conduct this study.