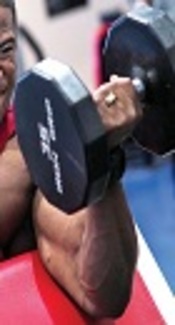 The present study was conducted to investigate the effects of a nine-week resistance training program on serum levels of malondialdehyde (MDA) in 17 - 21 year-old sedentary men.

In the present quasi-experimental study, 36 volunteers with no history of physical and mental illnesses and regular physical activities were randomly assigned to three groups of 12 men, including progressive resistance training group, moderate resistance training group and control group. Thee experimental groups underwent nine weeks of resistance training with weights; the control group was, however, banned from any forms of exercise. The training programs comprised three 3-week courses. In the progressive group, the intensity and volume of training gradually increased during these courses once every three weeks, whereas the moderate group underwent the same level of moderate resistance training during the whole nine-week program. Ten cc of fasting blood was taken from the anterior brachial vein of the subjects before training at 9 AM, i.e. pre-test and 72 hours after each course, i.e. posttest. The blood samples were transferred to the laboratory to have MDA levels measured using the kits manufactured by the Zell-Bio Company. Repeated measures ANOVA and post-hoc Tukey test were used to analyze the collected data.

The increasing intensity of daily resistance training with weights’ from light to moderately severe appears to increase the compatibility of oxidative stress and decrease lipid peroxidation .

The compatibility associated with oxidative stress and its effects are novel issues associated with the health effects of regular physical activity. Oxidative stress refers to oxidative reactions caused by creating free radicals, i.e. molecules with uncoupling electrons in their exterior orbit and an appetence to react to and decay oxidation with cellular stretchers and macromolecules (3). Living organisms and cells for neutralizing these adverse effects present defensive mechanism involving enzymes, namely the antioxidant system (3). Oxidative stress also refers to a condition in which the level of cellular oxidants produced exceeds the physiological capacity of neutralizing organs (3). Physical exercise has many health benefits and long exercise periods have beneficial effects, including improving the antioxidant system capability and decreasing the number of free radicals generated (4). Intense physical activity, however, endangers human’s health by generating excessive free radicals and through the oxidation of biological macromolecules (4). The membrane’s lipids degradation during oxidative stress leads to dangerous substances entering the intracellular space. Lipid peroxidation can be detected by measuring different indices such as MDA as the most important one.

MDA is the result of fatty acids oxidation with more than two double bonds. This molecule is a relatively stable aldehyde that may separate from its original location and emerge in other body fluids, making its measurement possible (4).

Although intense physical exercise is known to associated with the increased production of free radicals and oxidative stress, many studies have shown that the long-term compatibility caused by physical activities may eventually reduce oxidative stress and reinforce the antioxidant system (5). In addition to the known health effects such as improving the cardiorespiratory performance, reducing body fat and strengthening the skeletal system, regular physical activity appears to prevent a wide range of diseases associated with oxidative stress and free radicals such as cardiovascular disease, type 2 diabetes, Rheumatic arthritis, Alzheimer, Parkinson, and certain types of cancer (6). People who follow regular exercise programs benefit from reduced risks of diseases and enjoy a better quality of life (6).

Azizbeigi et al. (7) compared the effects of resistance, endurance, and parallel training on antioxidant and oxidative stress levels in healthy young men, and found that the MDA level significantly reduced in all groups. Margonise et al. found that the increased intensity of resistance training can increase lipid oxidative stress levels in young men and change the direction of compatibilities and increase the plasma MDA level.

The present quasi-experimental study was conducted on two experimental groups and a control group, each comprising 12 volunteers. After completing written consent forms, the subjects were evaluated in terms of general health, daily physical activity, the normal range of BMI (18.5 - 24.5), history of cardiovascular diseases, respiratory and liver failure, hormonal disorders, anemia, diabetes, physical injuries, orthopedic status and history of regular exercises during the previous three months. The subjects were randomly divided into three groups of 12 subjects, including the progressive intensity resistance training group, the moderate resistance training and the control group. Before beginning the training program, the subjects’ anthropometrical characteristics were measured and they were familiarized with the training program. The study began by taking10 cc of fasting blood from the subjects’ anterior brachial vein at 9 AM (pretest), which was repeated in all groups after 72 hours of rest to eliminate the effects of acute exercise. This process repeated for 9 weeks. The blood samples were transferred to the laboratory to have MDA levels measured using the kits manufactured by the Zel-Bio Company.

After a 10-minute warm up with light weights at the beginning of every week, the subjects’ maximum strength was measured using the Berzinsky equation. The experimental groups underwent three sessions of resistance training, whereas the control group was avoided from training. Both experimental groups participated in the first and second training sessions (3 days a week, 4 sets of 10 with 70% of one maximum repetition strength with 60-second rest intervals).In the third course, the progressive resistance group underwent a heavier program (6 days a week, 6 sets with 80% - 90% of one maximum repetition strength with 120-second rest intervals), while the moderate resistance group repeated the second program course for three weeks. They performed leg press, leg curl, bench presses, shoulder with barbell, and biceps and triceps with a barbell. The upper and lower body were moved alternately.

The foods consumed three days before blood sampling provided by subjects using dietary recalls forms were analyzed and the calorie content and absolute and relative percentages of the macro nutrition of the foods were determined using the nutritional software nutrition-4.

The Kolmogorov-Smirnov test was used to confirm the normal distribution of dependent variables and Levene’s test was used to affirm the homogeneity of variances. The means were compared using repeated measures ANOVA. Tukey’s test was utilized due to the existing significant mean differences. The data were analyzed in SPSS. P values less than 0.05 were considered significant.

Table 1 presents the descriptive characteristics of the subjects, Table 2 the results of repeated measures ANOVA and Table 3 the results of post-hoc Tukey test.

Table 1. The Subjects’ Pretestphysical Characteristics
Table 2. The Results of Repeated Measures ANOVA in Groups and Time of Measurement

a The symptom of significant differences at a level of P < 0.05.

a The symptom of significant differences at a level of P < 0.05.

A course of intense-enough physical activity can increase oxidative stress and cause certain symptoms in body’s natural fluids (5). This activity may be resistance aerobic or anaerobic endurance and speed activity (5). Although the exercise intensity is a major factor in developing oxidative stress, the prior preparation of subjects is a key factor in identifying the desired intensity of exercise. In other words, this intensity differs with the prior preparation levels of athletes and varies from one person to another (5). Other factors including nutritional status, rest and anxiety levels may also affect the oxidative stress range (8).

However, the intensity of physical activity, duration of recovery periods between sets and training sessions, and nutritional status of individuals are significant factors in achieving compatibilities (11, 12). Very intense training sessions without taking adequate rest and proper nutrition reduce physical functioning and disproportionately increase the risk of oxidative stress syndrome (13, 14).

The present results showed that nine weeks of very intense daily resistance training with weights significantly decreases the serum levels of MDA, which was consistent with the findings of Gaini and Sheykh al-Islami, who found a decrease in oxidative stress symptoms following long periods of resistance exercise, and with the findings of Ramel and Vincent (2, 15) suggesting that athletes and non-athletes have no significant differences in terms of MDA. This discrepancy can be explained by shorter training periods and unprepared subjects in Ramel and Vincent’s study.

These findings were also inconsistent with those obtained by Margonise suggesting an increase in MDA and other indicators of lipid peroxidation during daily resistance trainings. This difference appears to be linked to the stepwise increase in the training intensity during preparation in the progressive intensity training group, which developed the oxidative stress compatibility.

Given the key role of nutrition (16) in oxidative stress variations, nutritional information was recorded by the subjects 72 hours before every blood sampling. These data were analyzed inNutrition-4, and showed that despite the significant increase in the total calorie intake and food macromolecules in the exercise group compared to in the controls, no significant differences were observed between thee experimental and control groups in terms of relative percentage of food macromolecules. This finding reflects the control of nutrition effects exerted on oxidative stress.

Different mechanisms explain the reduction of lipid oxidation during long periods of physical activity, including the most important one, i.e. the increased number of mitochondria and changes in the enzymes of the electron transport chain which reduce free radical formations and the electron leakage to the outside of the chain (1, 17-20). This compatibility does not appear to be based on reducing the serum production, as an increased number of mitochondria and the enzymes of the electron transport chain are adaptive and can be effected by aerobic exercise (7, 12). The decreased activity of oxidase xanthine enzyme can be another mechanism contributing to reducing oxidative stress and serum MDA (21). The activity reduction of this enzyme is affected by increasing the capillary density, which is a compatibility mostly affected by aerobic exercise (22) and probably reducing and redistributing ischemia in resistance activities. Nevertheless, research suggests resistance training significantly affects the capillary density (20).

The increased muscle resistance against mechanical stress, reduced activity of phospholipase A and reduced fragmentation in proteins carrying iron and zinc are others mechanisms contributing to decreasing the production of free radicals and the associated oxidative stress, as addressed in literature (10, 23).

The reduced oxidative stress syndrome during long periods of exercise is consistent with a large body of literature (3, 15). The lower reduction of this symptom in the moderate intensity exercise group and significant differences between the moderate and severe exercise groups at post-test suggest that resistance training should be sufficiently intense and long to create compatibility in oxidative stress.

The findings generally suggest that daily and intense exercise activities are required to achieve compatibility and reduce lipids oxidation. The increasing intensity of daily resistance exercises with weights from light to moderately severe accompanying with an appropriate rest and nutrition can decrease lipid oxidation and other biological macromolecules.