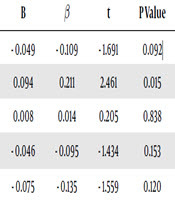 Depression is one of the most probable side effects of myocardial infarction (MI) besides its sudden occurrence, and is affected by various factors, such as personality traits.

Hence, the present study was conducted to compare 10-item and 60-item big five inventories in explaining the symptoms of depression in patients with acute MI.

Patients’ mean age (69.2% males) was 62.1 ± 11.1 years. The results showed a significant relationship between depression and factors of extraversion, agreeableness, and conscientiousness in BFI-SV and factors of extroversion, neuroticism, and agreeableness in NEO-FFI (P < 0.05). The results of regression analysis showed that BFI-SV explained 6.7% and NEO-FFI explained 5.8% of the variance of depression score (P < 0.05).

BFI-SV explains the symptoms of depression in patients with MI as much as NEO-FFI. Thus, the researchers can use the 10-item version to assess the personality traits of patients with MI in future studies.

As a fatal incident, myocardial infarction (MI) affects about 1% - 5% of the world population (1, 2). In Iran, 166 cases of MI lead to death on a daily basis (3), which mainly results in many physical and psychological consequences. Besides physical problems reported one year after the event in more than 40% of the patients (4), sudden and unexpected MI can lead to psychiatric disorders like depression (5).

As one of the most likely consequences of MI, depression is observed in 13% - 87% of the patients (6, 7). However, recent studies have shown depression is not just induced by acute heart events, but factors such as female gender, younger age, marital status, smoking, hospital stay, fat intake, functional limitation, social support, negative disease beliefs, history of anxiety and depression, and personality traits including type D and neuroticism are involved in it (8-10).

A wide range of studies have stated the role of personality factors in the incidence of cardiovascular diseases and MI (11-13), but few studies have compared the short and long forms of a personality model such as the five-factor model. The original questionnaire for measuring the five major personality factors has 240 items and its short form has 60 items (14, 15). Recently, a shorter form of this inventory has been standardized with 10 items for research purposes (16). Patients are often tired with long forms with many items and avoid answering accurately. Thus, it is often advisable to use shorter standard tools for evaluating the status of patients with acute diseases (17, 18).

The present study was therefore conducted to compare 10-item and 60-item big five inventories in explaining the symptoms of depression in patients with MI.

The study population in this cross-sectional study comprised all patients with MI admitted to Imam Ali (AS) Hospital in Kermanshah (Iran) during April-September 2018. The participants entered the study using consecutive sampling. During the mentioned time, 293 patients with MI were admitted to the hospital: 38 were excluded due to failure to meet the inclusion criteria and 4 due to their unwillingness to participate in the study. The inclusion criteria were a definitive diagnosis of MI by an experienced cardiologist, age range of 18 - 80 years, having at least elementary education, and willingness to participate in the study. The questionnaires with more than 20% missing answers were excluded. Finally, 250 questionnaires were analyzed. After the initial screening of the patients by the research team, the eligible patients were identified. After providing the necessary guarantees to patients for the confidentiality of their identity, their written consent was obtained. Then, the patients completed the questionnaires in the presence of the questioner.

The research team questioner went to the admissions ward of the hospital and identified the target population on a daily basis and gave them the questionnaires. A brief face-to-face interview was first performed with each patient to establish a therapeutic relationship and obtain the written consent from patients to participate in the study. Then, the questioner briefed the patients on how to respond to the questions. Demographic data and medical records of patients, such as age and gender, education, occupation, marital status, smoking, hypertension, hyperlipidemia, diabetes, history of MI, and family history of heart diseases reported by patients were recorded by the questioner in research forms. Then, this self-reported information was matched with the medical records of patients completed by the cardiologist and incorrect information was corrected. After questionnaires were completed by the subjects, they were collected individually and in the presence of the researcher. Finally, the data was recorded and analyzed in SPSS 20. In the initial interview with patients, the researchers explained the nature of the work to them and asked them to participate in the study to observe ethical considerations. They were then asked to sign a written consent, and complete the questionnaires. Moreover, the patients were assured that their information would remain confidential.

The original NEO form was developed to evaluate the main five personality factors by Costa and McCrae in 1989, and then repeatedly revised. The 60-item form of this scale was designed in 1992. The inventory is based on five major personality factors of neuroticism, extraversion, openness, conscientiousness, and agreeableness. Twelve items are designed for each of the 5 personality factors. The responses are graded as a 5-point Likert scale from totally disagree to totally agree. In the Iranian population, Cronbach’s alpha of this test for subscales is from 0.39 to 0.83, and its concurrent validity with Eysenck’s questionnaire is from 0.47 to 0.68 (19).

This questionnaire evaluates the five big personality factors through ten items. The original designers of the questionnaire selected the questions with the help of consensus of experts and empirical analyses to reach the main traits (16). In the 10-item scale, each big factor is measured by two items. Scoring is based on a 5-point Likert scale from totally disagree = 1 to totally agree = 5. This tool has acceptable reliability, convergent validity and divergent validity (16). In Iran, Cronbach’s alpha has been reported as appropriate for all factors and the whole scale (0.60 - 0.69) (20).

First, descriptive information related to demographic factors, disease risk factors, and personality traits and depression was reported. Then, non-violations of the assumptions of linear regression such as normality, non-collinearity in predictive variables, and the existence of a significant correlation between predictor variables were examined (23). After confirming the assumptions, to examine the effective personality variables in depression symptoms and determine the exact contribution of each of the variables, the data was analyzed using descriptive statistics (mean and standard deviation), Pearson correlation coefficient and multiple linear regression analysis (concurrent method) in SPSS 20. Two separate regression models were designed: In the first model, evaluated personality traits were entered into the model with a questionnaire of 10 items for predicting depression. In the second model, personality traits assessed with the 60-item questionnaire were inserted into the model. All of the predicting personality factors entered the model simultaneously. All tests were of two domains and were significant at 0.05 levels.

Table 1. The Comparison Demographics and Risk Factors Between Both Sexesa

Table 2. The Correlation Between the Personality Factors and Depressiona

Table 3 shows the results of multiple regression analysis for predicting depression using 10-item form of the questionnaire. As seen, none of the components alone can predict symptoms of depression (P > 0.05). However, all personality factors can significantly affect 6.7% of the variance of depression score (F = 3.519, P = 0.004).

Table 3. The Multiple Regression Model for Predict Depression by NEO-10a

Table 4. The Multiple Regression Model for Predict Depression by NEO-6a

The present study was conducted to compare 10-item and 60-item big five inventories in explaining the symptoms of depression in patients with acute MI. The results showed that the 10-item version explains 6.7% and the 60-item questionnaire explains 5.8% of the variance of the depression scores in patients with MI, and that the two tools are not different. If shorter standard tools are designed appropriately, they can be effective in evaluating patients over a shorter time and at a lower cost (24). Furthermore, longer tools do not necessarily cover all dimensions of a variable or factor (25).

Among the limitations of the study are that only patients with MI were included and other patients with coronary heart diseases, heart failure, heart valve diseases, and patients with invasive interventions including CABG were excluded. It is recommended that in future studies, all groups of patients with heart diseases be enrolled into the study. Non-randomized sampling was another limitation of the current study. The tool for measuring depression (one of the DASS subscales) in the present study may be more inefficient than structured interviews such as SCID-I. Using specific tools to measure depression symptoms should be considered in future studies. Moreover, the patients in our study were limited to a specialized cardiac hospital in western Iran. It appears that selecting the patients from different health centers from all over the country and increasing the sample size in future studies may help obtain more accurate results.