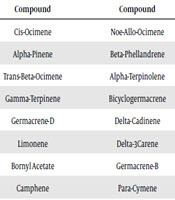 Staphylococcus aureus is one of the important causative agents in mastitis.

The aim of this study was determination antimicrobial effect of Ferulago angulata and different common therapeutic antibiotics on growth of Staphylococcus aureus isolated from subclinical mastitis cases.

In this study the antibacterial effect of Ferulago angulata essential oil, aqueous and hydro alcoholic extract on Staphylococcus aureus growth was done and compared with common therapeutic antibiotics such as tetracycline, erythromycin, kanamycin and gentamicin by diffusion disk method. Minimum inhibitory concentration and minimum bactericidal concentration were tested through tube standard method.

Staphylococcus aureus is a Gram-positive, round-shaped bacterium that that causes various infections in humans and animals. The prevalence of staphylococcal mastitis in the milk industry and its products has led to significant economic losses worldwide (1). The most important of these damages is the reduction in the amount of milk and the disruption of milk production. Mastitis is a response from the body to the damage to the breast tissue. Bacteria is producing mastitis from the teat enter the tubers and, after deployment in the tuber, create toxin (2).

In subclinical mastitis, the appearance of milk is normal, but milk composition changes such as increased white blood cells and breast or somatic cell cells (SC), decreased milk fat, decreased casein, lactose depletion, milk serum, increased milk chlorine, increased glycogen and reduced milk production (1). Diagnosis of subclinical mastitis can be detected by counting the number of somatic cell milk (3). Most infections caused by Staphylococcus aureus are subclinical and delay in diagnosis and treatment result in disease progression and form an acute form of mastitis (4). So early diagnosis of subclinical mastitis and its treatment is one of the most important the problems of the cattle industry and dairy factories (5). Drug resistance to common antibiotics in animal husbandry is important in the pharmaceutical industry and the treatment of microbial diseases common in the animal husbandry and veterinary medicine. The use of medicinal plants in various forms, such as essential oils and plant extracts, is an appropriate solution for the replacement of natural substances with chemical and synthetic drugs (6). Antimicrobial and antioxidant properties of natural herbs can be a good idea for obtaining new antibiotics (7). The Chavir, known as Ferulago angulata, is located in the west of Iran, especially in Kermanshah Province. This herb was traditionally used as a digestive, hemorrhoid treatment. Ferulago angulata, as a natural and rich source of monoterpenes has an antibacterial effect (8).

Extracts and essential oils from seeds and plant aerial parts, have strong antimicrobial effect. Hydro alcoholic extract of Chavir effect in immune system of rainbow trout, which improves and strengthens the defenses of the body of the fish (9). The phenolic compounds in the extracts and essential oils of medicinal plants are considered as antioxidant and antibacterial compounds and components in these plants. Essential oil and extracts of Chavir plant have numerous antioxidant properties due to its phenolic and flavonoid combinations (10).

Regarding the occurrence of drug interactions and the importance of complications of Staphylococcus aureus subclinical mastitis in the food industry and the production of dairy products and the importance of native herbs in each region, the aim of this study was to compare the antimicrobial effect of essential oil, aqueous and hydro alcoholic extract was used with antibiotics commonly used in the laboratory against Staphylococcus aureus isolated from subclinical mastitis cases.

Ferulago angulata were collected from Dalahoo Mountains in Kermanshah Province in Iran. After identified by the herbarium of Islamic Azad University, Kermanshah Branch, essential oil extraction (stems, leaves and flowers) was performed by hydro distillation and clevenger-type apparatus (1928) for 3 hours (11). In order to extract, the whole plant was dried (stems, leaves and flowers) and powdered. Extracts were extracted from distilled water and ethanol 80% solvents separately. The mixture was mixed with 50 g of powder with 250 mL of ethanol 80%, and the resulting mixture was stirred and stirred for 72 hours with a magnetic stirrer. Then filtered by Watten filter and dried under reduced pressure at 37°C with rotator evaporator (9).

Three hundred milk samples were collected from traditional and industrial cattle in Kermanshah Province. Sampling was carried out in a completely sanitized and sterile manner. Teats was washed with water, then dried disinfect with 70% ethanol. Ten milliliter of milk were collected in sterile tubes. Then, samples were kept in the freezer (-20°C) until the appropriate bacteriological tests were performed (12).

To determine the sensitivity of Staphylococcus aureus isolated from bovine mastitis to different concentrations of essential oil and extract of Ferulago angulata, disk diffusion test was performed using Kirby-Boer method.

A 24-hour culture of a bacterial suspension containing 0.5 McFarland dilutions was prepared as 0.5 × 108 × CFU/mL and uniformly grown in a medium of Mueller-Hinton agar (Merck, Germany). Antibiotic disks erythromycin, kanamycin, tetracycline and gentamicin (antibacterial medicine company) were placed on sterile foam and incubated at 37°C for 24 hours and the diameter of the inhibition zone was measured. Sterile disks were discarded at concentrations of 30, 20, and 40 mg/mL of aqueous and hydro alcoholic extracts, and then disks were transferred to the microbial contaminated area of the Mueller-Hinton agar. In order to determine the antimicrobial activity of essential oil, 10.5 and 20% essential oil was prepared by dimethyl sulfoxide (DMSO). Sterile disks were placed on the surface of the culture medium of the Mueller-Hinton agar contaminated with germs and 10 mL of essential oil was discharged with concentrations prepared on the disks. Plates containing extracts and essential oil disks were incubated in a culture medium infected with germs at 37°C for 24 hours and the diameter of the non-growth holes with caliper was measured in millimeters. The experiments were repeated 3 times.

A micro dilution broth was used to determine the minimum inhibitory concentration (MIC) and Minimum bactericidal concentration (MBC). Dilutions of 2, 4, 8, 16, 32, and 64 mg/mL of aqueous and hydro alcoholic extracts and dilutions of 1%, 2%, 4%, 6%, 8%, and 10% of Chavir were prepared and filled into tubes test specimens were added to the Muller Hinton medium. Then to each tube, each 1 mL of the Muller Hinton medium, the concentration of 1 × 106 CFU/mL was added. All tubes were incubated at 37°C for 24 hours and then the results were examined. The minimum dilution of extract and essential oil which inhibited bacterial growth at concentrations was considered as the minimum inhibitory concentration (MIC). All of the tubes lacking turbidity (non-growth of bacteria) were cultured in a Mueller-Hinton agar and at 37°C for 24 hours at incubator, the first cultures in which no bacteria were observed as the minimum bactericidal concentration (MBC) was considered (15).

Table 1. The Most Important Compounds of the Essential Oil of Ferulago angulata
Table 2. The Zone of Inhibition of Staphylococcus aureus Growth by Different Concentrations of Essential Oila

aValues are expressed as mean ± SD. Non-identical letters in a row indicate a significant difference between the antimicrobial effects of various concentrations of the essential oil (P ≤ 0.05).

Table 3. The Zone of Inhibition of Staphylococcus aureus Growth (mm) by Different Concentrations of Aqueous and Hydro Alcoholic Extract (mg/mL)a

The results of this study showed that essential oil and extract of Ferulago angulata have significant antibacterial effect on Staphylococcus aureus isolated subclinical mastitis.

Regarding the healthy appearance of milk in the subclinical mastitis, it can be stated that the disease is one of the important health problems in the milk industry and its products and significant economic and health consequences. It entails innumerable economic losses to the dairy industry of the country. On the other hand, increasing the resistance of antibiotics in human and animal made serious dangers in humans. Use of natural herbs such as Ferulago angulata with high and impressive antimicrobial effect can be a good alternative to synthetic antibiotics in the pharmaceutical industry.