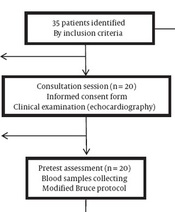 The present study aimed to investigate the effects of 8 weeks Yoga and cardiac rehabilitation training on IL-6 and hs-CRP after coronary artery bypass surgery.

It could be proposed to add Yoga training to cardiac rehabilitation program after coronary artery bypass surgery.

The reported prevalence of coronary artery disease (CAD) in adult surveys has raised 4-foldover the last 40 years. The most common method for CAD management is coronary artery bypass graft (CABG) surgery which in itself leads to stress responses that causing long-term admission, physiological disorders and prolonged hospitalization (1). Chen et al. and Jerome reported that inflammation has a key role in atherosclerosis (2, 3). Interleukin-6 (IL-6) and high sensitivity C-reaction protein (hs-CRP) are two important pro inflammatory cytokines in acute phase of inflammation. IL-6 is secreted in response to Interleukin 1-β (IL-1β) and Tumor necrosis Factor α (TNF-α) (4) and hs-CRP releases from the liver by IL-6 secretion (2).

We aimed to study about effects of 8 weeks Yoga and cardiac rehabilitation training on IL-6 and hs-CRP after coronary artery bypass surgery.

The subjects of this RCT study were 20 male patients (40 - 75 years old) who had experienced CABG surgery. Subjects are invited to learn more about how the project is being implemented. They filled out the informed consent form. Also, patient’s echocardiography was reviewed by a physician to determine their ejection fraction (EF). Inclusion criteria included: EF ≥ 35%, no experience for emergency heart surgery, lack of motor disorders, Yoga training experience and associated illness (renal failure, cancer, and diabetes). Exclusion criteria included lack of follow-up and regular attendance at training sessions, changes in patients' echocardiography and increasing of chest pain. In order to observe and record the cardiovascular response of patients to exercise, Modified Bruce protocol was performed (17). Cardiac response was monitored continuously during the test using a 12-lead electrocardiogram. This protocol continued until indications of discontinuation of maximal exercise testing (including fatigue, shortness of breath, chest pain, hypertension and maximal heart rate).

Vein blood sample were collected at baseline and at the end of the study under fasting conditions by an expert person. The patients were in sitting position for at least 15 minutes. All samples were centrifuged for 15 minutes at 3000 rpm to separate serum from plasma. Blood samples were stored at -80°C for testing at the appropriate time. The IL-6 and hs-CRP plasma levels measurement were performed by using Human IL-6 ELISA kit (Diaclone, France) with 2 pg/mL sensitivity and Human High Sensitive CRP, ELISA kit (ZellBio GmbH, Ulm, Germany) with 10 ng/mL Sensitivity respectively according to their manuscript. After qualifying for the study, Patients’ names were stored in envelopes using codes assigned to them and they were randomly assigned into two groups: cardiac Rehabilitation training (or CRT group, n = 9) and Yoga combined with cardiac Rehabilitation training (or YCRT group, n = 10) by a third person (other than anchors). The subjects in two groups performed training in accordance with Table 1.

Table 1. Summary of the Training Protocol

Training sessions were done in Cardiac Rehabilitation Center of Shahid Rajaie Cardiovascular, Medical and Research Center in Tehran for 8 weeks. For understanding Yoga training intensity, we used a 20-point Borg’s scale (rate of perceived exertion or RPE). The optimal pressure sensation in present study was considered based on proportional to patients' ability (between 9 - 11 score). Subjects who stopped attending for any reason were excluded from the study (CRT group n = 7 and YCRT group n = 7). The flow chart diagram is shown in Figure 1. 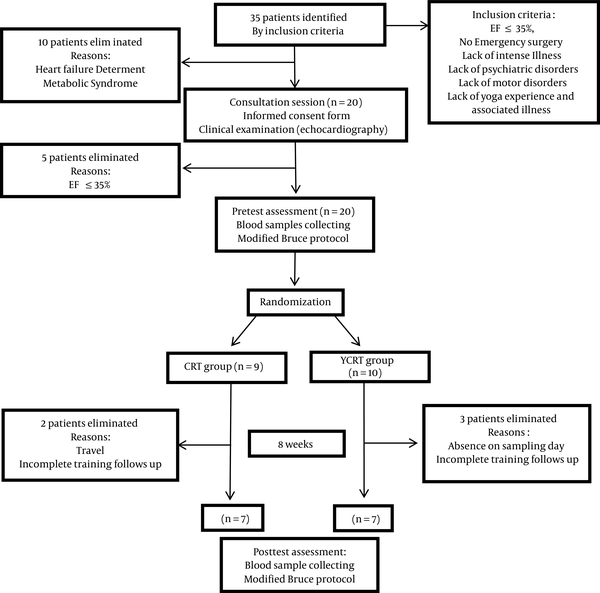 All statistical analyses were performed by using SPSS (V. 21). Descriptive and inferential statistics were used for data analysis. The distribution of data related to the variables of research was studied by Shapiro's test. While testing the assumptions of covariance analysis, this test was used to compare between groups (P ≤ 0.05).

Demographic characteristic of subjects are shown in Table 2. There weren’t any significant differences in the distribution of these variables among two groups.

This is a first RCT study that considers the effects of Yoga and cardiac rehabilitation training combination on IL-6 and hs-CRP levels after coronary artery bypass surgery. The present study showed that despite the low to moderate decrease in IL-6 and hs-CRP values, there wasn't significant difference between the two interventions.

There are some studied that emphasized our founding. Morgan et al. in a meta analyzed showed a moderate reduction in CRP levels and a small but not significant reduction of IL-6. Based these results they proposed that further methodologically studies must be done to determine clinical implications of these findings (12). Irwin et al. reported that Yoga is a multidimensional behavioral therapy that integrates moderate physical activity, deep breathing, and meditation to promote stress reduction and relaxation, which could potentially influence the immunity (18).

Growing bodies of RCT studies have investigated the therapeutic value of Yoga interventions (15, 18).

The findings of some studies were inconsistent with our findings. Kim et al. investigated that cardiac rehabilitation training after percutaneous cardiac intervention (PCI) surgery in contrast to control group could decrease TNF-α, IL-6 and CRP (20). Also it should be noted that in contrast to our study, some subjects had emergency surgical experience.

In another study, 6 months cardiac rehabilitation training reduced ICAM-1 but did not affect IL-6 and TNF-α level (21). Haybar et al. reported that 12 sessions of cardiac rehabilitation training (2 sessions per week) couldn’t reduce hs-CRP levels significantly (22). Studies that reported inflammatory markers reduction were different in the characteristics of the control group, stage of illness, pattern, dose and severity of training with our study.

It is evident from the research that 3 hours/week and 2 - 3 x/week didn’t give good results, although the duration of a given last up to 6 months or 24 weeks (21). In a review study, Morgan et al. reported that 6 to 16 weeks of Yoga was able to significantly reduce this.

Also, normal physiological concentrations of IL-6 in human blood are relatively low at 1 - 5 pg/mL but increase rapidly in disease conditions and it’s associated with increased mortality (23). The IL-6 and CRP values were higher than the normal values in both groups; so this indicates that the subjects in the two groups were at risk of recurrent heart disease.

Kim et al. reported that 6 weeks supervised training and 8 weeks home-based cardiac rehabilitation training after PCI surgery decreased hs-CRP, TNF-α and IL-6 compared to control group and also IL-6 values had different decline in both groups significantly (20). In a cross sectional study about exercise training characteristics in cardiac rehabilitation programs, this point was made that Borg’s rating of perceived exertion (RPE) was the most frequently reported method of prescribing exercise intensity. Abell et al. reported that when converting all studies intensities to the same scale, a level of 11 - 13 Borg (corresponding to 3 - 4 modified Borg) was still the most frequently used training intensity (24). However, our Yoga training intensity was about 9 - 11, it is suggested that Yoga will work gradually because in the early stages of its benefits it improves flexibility and posture, as well as decreased stress and increase a sense of peace. The longer or more frequent the duration and intensity of Yoga is done will enhance the immunity system gradually and provides many benefits to the body (25).

Given the adverse association between training and these pro inflammatory markers, such training-induced reductions may have clinical relevance (2).

We had some limitations in this study and it should be noted that the low sample size in the two groups could be a reason for low test power and effect size. Considering the importance of follow-up period and control group, we also suggest same studies with 2 and 6 months follow-up period and wait list control or Yoga group.

Thanks and appreciation are offered to all colleagues and researchers who helped us with this article.