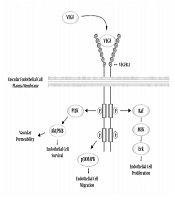 The Effect of Physical Activity on VEGF and HIF-1 Signaling

The purpose of the present study was to investigate the context of research into the physiological roles of VEGF and the most important potential mechanisms that may lead to a temporary decrease in serum VEGF, as well as to perform a desirable conclusion and provide more relevant data from previous research.

In this study, articles were searched in specialized databases and 40 related articles were selected based on inclusion and exclusion criteria. Then the effect of physical activity on VEGF and HIF-1 signaling was investigated.

Exercise and physical activity by stimulating and activating VEGF and HIF-1 signals may induce generating new arteries and angiogenesis.

Substantial biochemical and physiological changes occur in the human body following physical activity to improve performance (1). Increased capillary density or angiogenesis is one of the most important adaptations at the skeletal and cardiac muscle levels (2). Proliferation, differentiation, and migration of capillary endothelial cells are required for the formation of new vessels, either by budding or dividing of existing capillaries (3).

Angiogenesis, on the one hand, increases oxygenation to the skeletal muscle and provides an efficient context, and on the other hand, reduces the incidence of myocardial infarction, stroke, and hypertension (4); and is one of the main criteria for success in sports competitions, especially endurance activities and increasing maximum oxygen consumption (VO2max). Increasing the capillary density by elevating the level of diffusion, increasing the time of exchange between blood and tissue, and decreasing the oxygen diffusion distance, rises the arterial-venous blood oxygen difference and increases VO2max (5).

Studies show that physical activity stimulates the process of angiogenesis through a set of growth factors. The most important growth factor involved in angiogenesis is vascular endothelial growth factor (VEGF) (6). This factor is a 45-kDa glycoprotein that is secreted in response to stimuli such as hypoxia and shear stress, and performs its signaling through binding to its receptors in endothelial cells. Afterwards, VEGF provides angiogenesis through the up-regulation of anti-apoptotic components of DNA synthesis, destruction of basement membrane, and phosphorylation of endothelial adhesion components between cells and tight junctions.

As shown in Figure 1, upon release of VEGF and binding to its specific receptor at the endothelial cells surface through phosphorylation, it activates the Raf, p38MAPK, and PI3K pathways, which provides the basis for vascular endothelial cells proliferation, migration, permeability and survival, respectively, and it eventually causes vascular formation (7). VEGF also increases capillaries dilatation and their reception capacity, and by preventing platelet aggregation, reduces clot formation and vascular obstruction. Taken together, these factors increase blood flow and oxygen transport to the target tissue. VEGF causes the formation of apertures in the capillaries endothelium and increases vascular leakage, thereby increasing the duration of blood supply to the capillaries and the exchange of respiratory gases (2). 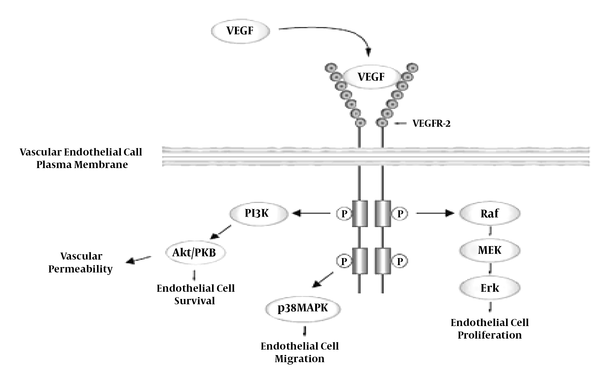 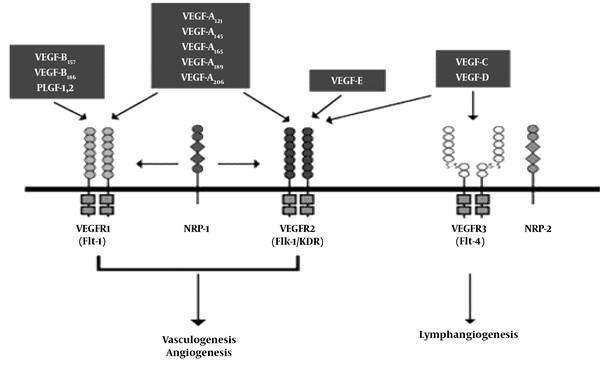 VEGF family and its receptors 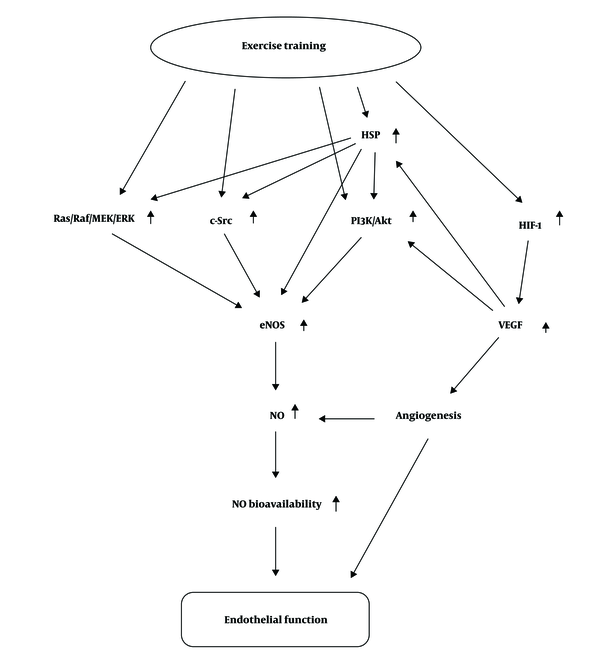 Exercise training by activating the AKt kinase pathway and increasing eNOS levels increase VEGF gene expression in the cardiac muscle (11). Increasing the intensity of exercise increases the accumulation of lactate and adenosine in the body (12). Adenosine increases cAMP concentration and consequently increases VEGF expression through activation of the Az receptor. On the other hand, adenosine has been shown to be involved in the release of cellular VEGF. Stretching and muscle contraction also lead to the activation of a large number of cells, including skeletal muscle myocytes, satellite cells, interstitial fibroblasts, vascular smooth muscle cells, pre-sites, endothelial cells, and VEGF release into the interstitial space and bloodstream (13).

VEGF response varies according to different training guidelines: Very intense and short-term trainings are likely to make no difference in VEGF and ultimately angiogenesis.

Studies have shown that the higher the intensity of activity, the better the secretion of some hormones, including cortisol. A slight increase in cortisol concentration prevents VEGF secretion from endothelial cells (14). High-intensity activity through the involvement of the hypoxia process affects the rate of transcription and translation of VEGF mRNA, and these changes ultimately increase the level of VEGF in the bloodstream (12). Also, since the level of VEGF gene expression in response to hypoxia in slow-twitch fibers is higher than that in fast-twitch fibers, it is possible that invocation of the types of fibers may also contribute to the level of serum VEGF in response to the activity.

Physiological-structural changes induced by VEGF on VO2max increase due to adaptation of endurance training through increased vascular leakage, increased capillary dilatation and reception capacity and prevented platelet aggregation, clot formation and vascular obstruction, increase blood flow and oxygen transport to the target tissue, and in the long term, lead to increased tissue capillary. 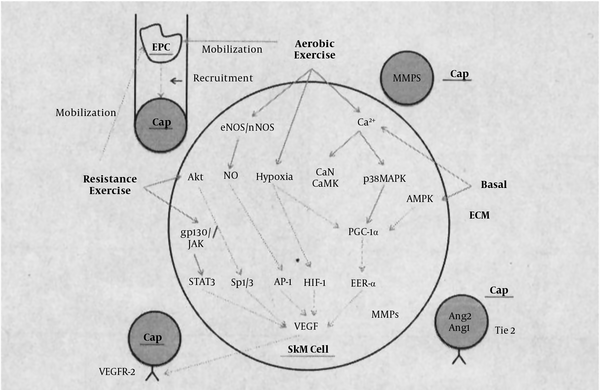 Effect of endurance and strength training on the activation of angiogenesis

In another study, the effects of gender and physical activity on resting VEGF levels and submaximal training were investigated. The results of this study showed no differences between the two sexes. Although the possible mechanisms are not well known, men have more muscle mass to secrete VEGF. On the other hand, women have 2 to 3 times more estrogen and leptin hormones that increase the VEGF gene. Therefore, no difference was observed between men and women at rest and submaximal training.

According to Figure 5 Another factor affecting angiogenesis is mechanical forces. During resistance training, muscle contraction and stretch increase and the blood flow increases by 10 to 20 times, increasing muscle tension, and as a result of these mechanical forces, endothelial cells become stretched and the blood flow increases and vasodilation occurs. On the other hand, as shown in Figure 4, these forces increase calcium, and this increase by rising NOS and COX induces dilation (16).

Effect of hemodynamic forces and vasodilatation

According to Figure 7 During exercise training, reactive oxygen species (ROS) also increase, which increase VEGF through the AMPK and P38MAPK pathways, one of whose consequences is the formation of angiogenesis (15).

The role of ROS on angiogenesis

Angiogenesis occurs during physical activity from a variety of pathways, but if a person becomes inactive for any reason, based on the following figure, the conditions return to their original state and, with continued inactivity, the vessels become smaller and their functions decrease (17).

According to Figure 8 The most likely mechanisms that lead to a temporary decrease in serum VEGF may be the following:

Effect of physical activity and inactivity on vascular structure and function

1) Increased binding of VEGF to its receptors in the endothelium, which ultimately stimulates the process of angiogenesis in local tissues such as the heart and skeletal muscle.

2) Binding of VEGF to other proteins, such as heparin sulfate and EPC, whose increase protects excessive blood vessel leakage against increased VEGF.

Hypoxia is another major drive of the angiogenesis process. Under hypoxia, there is a remarkable increase in the expression and content of HIF-1 protein expressed in a variety of mammalian tissues and in the skeletal muscle in particular. This protein is composed of two subunits, HIF-1α and HIF-1β, which HIF-1α has a short half-life (approximately 5 minutes) and is extremely sensitive to oxygen, while HIF-1β is not very sensitive to high levels of oxygen.

Under normoxic conditions, HIF-1α is degraded by hydroxylation (loss of OH factor). When the oxygen level is high, there is little amount of HIF-1α that disappears with VHL protein command and cannot bind to HIF-1β, but under hypoxic conditions, HIF-1α degradation is blocked because hydroxylation is inhibited. Thus, the HIF-1α protein accumulates under hypoxic conditions and this increase in density provides the basis for the binding of HIF-1α and HIF-1β and the formation of the HIF-1 complex. Hypoxia is involved in the gene expression of angiogenic factors through regulation of HIF-1 elevation, thereby promoting tissue vascularization. On the other hand, one of the strongest stimuli to initiate the angiogenesis process is hypoxia, which regulates the VEGF transcription process.

According to Figure 9 research on exercise has shown that combining hypoxia with physical activity results in increased VEGF protein content and expression. Some researchers have reported an increase in HIF-1α expression by performing one bout of endurance training. Therefore, it may be an important factor involved in adaptation responses to endurance training. Also, some researchers have found that during endurance training, the first response to adaptation to hypoxic stress in the muscles is HIF-1 transcription, which regulates glycolysis and angiogenesis in response to low levels of oxygen in tissues. On the other hand, changes such as increased capillary density, pulmonary ventilation, cardiopulmonary function, mitochondrial volume, fatty acids intake, oxidative fibers utilization, hexokinase enzyme activity, liver regeneration and decreased lactate production may be affected by the regulatory role of HIF-1. 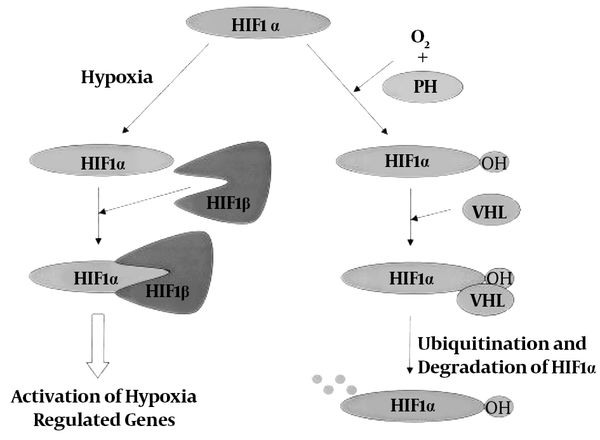 How HIF-1 is activated by hypoxia

Some researchers consider HIF-1 alpha a key factor in the response of the skeletal muscles and tissues such as the lungs to endurance training. In this regard, a study showed that 8 weeks of training in the hypoxia-normobaric conditions increased serum VEGF protein levels 44%, while, in the same period, the levels in the normobaric group increased only 17%. Thus, the results showed that although endurance training improved VO2max and VEGF, endurance training under hypoxia could accelerate this improvement. On the other hand, extraverted activity can affect the angiogenesis process by reducing the hypoxia process compared to introverted activity. Inflammatory responses to extravascular activity by altering the expression of extracellular matrix-derived proteases and precursor proteins such as matrix metalloproteinases induce capillary dilation, endothelial cell activation, and destruction of the capillary basement membrane.

Continuation of these conditions causes major changes in the expression of angiogenesis regulating factors including VEGF and ultimately changes in angiogenesis and capillary density. On the other hand, a study examined the effect of exercise training on the hypoxia induced levels of neonatal lungs of pregnant rats. The results showed that HIF-1 levels in the neonatal lungs increased while neonatal weight remained unchanged; this suggests that regular endurance training during pregnancy can be considered as an appropriate activity to help the fetus grow. There was also a study on elderly subjects that showed a significant increase in HIF-1 levels following a long-term training program.

Exercise and physical activity by stimulating and activating VEGF and HIF-1 signals can cause generating new veins and angiogenesis, which can in turn, result in cell survival in different tissues and success in sports competitions, especially endurance sports. These activities increase the capillary density by increasing the diffusion level, increasing the time of exchange between blood and tissue, and reducing the oxygen diffusion distance, increase the arterial-venous blood oxygen difference and VO2max; on the other hand, VEGF enhances capillary dilatation and reception capacity, which results in increased blood flow and oxygen transport to the target tissue and ultimately improves the performance of athletes (5).

Thanks and appreciations are offered to all colleagues and researchers who helped us with this article.

Copyright © 2020, Journal of Clinical Research in Paramedical Sciences. This is an open-access article distributed under the terms of the Creative Commons Attribution-NonCommercial 4.0 International License (http://creativecommons.org/licenses/by-nc/4.0/) which permits copy and redistribute the material just in noncommercial usages, provided the original work is properly cited.
download pdf 2.25 MB Get Permission (article level) Import into EndNote Import into BibTex
Number of Comments: 0