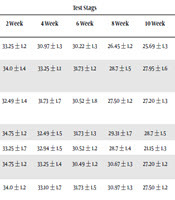 Stability of Iodine in Iodized Salt Against Heat, Light and Humidity

Iodine has undeniable effects on human in all stages of life and its deficiency during fetal stages causes mental retardation, which incurs huge costs for treatment and care.

The aim of this study was to evaluate the effect of heat, humidity and light on the iodine content in iodized salt.

In this analytical-descriptive study, five brands of refined iodized salts were randomly selected from supermarkets in Babol City. All tests were performed in the Chemistry Laboratory of Paramedical School in Babol University of Medical Sciences. In the current study, the samples were kept for three months under different conditions of humidity, without humidity, light, darkness, and temperatures of 37°C, refrigerator and ambient. The iodine amount of samples was tested every 15 days using titration method based on Britain Pharmacopoeia. Data were analyzed with ANOVA in SPSS.

The results indicated that ambient temperature, darkness and non-humidity were the best conditions for keeping iodized salt.

Iodine is an essential element for the production of thyroid hormones, and its deficiency is currently considered one of the causes of brain damage across the world. An adult needs 150 µg of iodine per day to grow normally, of which about 90% is gained from food and 10% from water (1-4). Iodine deficiency is one of the most important health issues in developing countries like Iran (5). Iodine deficiency disorders (IDDs) mainly affect the health of more than a third of the world’s population (6).

IDDs include goiter, cretinism, intellectual disability and physical disabilities such as growth retardation, movement and mobility deficiencies, strabismus, lack of muscular coordination and deaf-mute (7). Iodizing the salt is one of the effective ways to prevent and control IDDs (8, 9).

Storage conditions of iodized salt such as light, temperature, and humidity can affect the iodine stability. Previous studies have shown about 58.5% of iodine content was lost by storing salt at room temperature with a relative humidity of 30% - 45% in sealed bags after three years. Therefore, constant and accurate monitoring of iodine content in the produced and consumed salts in the community are very important (10). Similar studies indicate that iodine is reduced by physical environmental factors such as light, heat and humidity. Dasgupta et al. suggested that salt storage at high humidity significantly reduced iodine content (11).

In addition, Diosady et al. stated that high humidity led to the loss of iodine in iodized salt (12). Iodine less than the standard (30 ppm) in consumed salt causes failure in the country’s program against IDDs, while iodine more than the standard (50 ppm) has adverse effects on the community health (13).

Considering the importance of iodine for community health, the present study evaluated iodine stability in different conditions of light, humidity and temperature in refined iodized salts.

In this descriptive-analytical study, samples of refined iodized salt marketed in Babol (5 salt brands labelled as 1, 2, 3, 4, and 5) were randomly selected and the initial content of iodine in the samples was measured. Then, iodine stability of samples was studied in different conditions of ambient light, darkness, humidity, without humidity and ambient and incubator temperatures of 37°C.

The iodine content of samples was tested every 15 days in the Chemistry Laboratory of Paramedical School in Babol University of Medical Sciences using titration method recommended by British Pharmacopoeia. The results were reported as mean ± SD after three repeats.

The results were analyzed using paired t test and ANOVA in SPSS.

The concentration of iodine was totally analyzed for 240 times over a period of three months at ambient light and darkness, humidity and non-humidity, ambient temperature, refrigerator temperature and temperature of 37°C every 15 days.

Comparison of initial iodine concentration with its changes in different conditions in samples is presented in Tables 1 - 5.

Table 1. Comparison of Initial Iodine Concentration with its Changes in Different Situations in Sample 1 of Salta

Table 2. Comparison of Initial Iodine Concentration with its Changes in Different Situations in Sample 2 of Salta

Table 3. Comparison of Initial Iodine Concentration with its Changes in Different Situations in Sample 3 of Salta

Table 4. Comparison of initial iodine concentration with its Changes in Different Situations in Sample 4 of Salta

Table 5. Comparison of Initial Iodine Concentration with its Changes in Different Situations in Sample 5 of Salta

Considering that humidity was the only variable in conditions (1, 2) - (3, 4) - (5, 6) and (7, 8), it can be said that these differences occurred due to humidity. In other words, iodine concentration reduced more significantly in humidity than non-humidity condition.

Given that only the light and dark were variable factors in conditions (5, 7) and (6, 8), it can be said that light was responsible for reducing iodine in samples.

Therefore, based on all findings, it can be concluded that the best condition for salt storage is ambient temperature, dark and non-humid. The results of the current study are the same as those of a study in 2008 (14).

Besides, the findings of this study are consistent with those of Mahdinia and Nasehinia who suggested salt with iodine concentration less than 40 ppm should not be sold (15).

Dasgupta et al. (11) in the United States demonstrated that storage at high humidity significantly reduced iodine content, which agrees with the results of the present study.

Similar to the current study, Biber et al. (10) illustrated that about 58.5% iodine of salt was lost at room temperature with a relative humidity of 45% - 30% in sealed bags after three years.

The results of a study indicated that iodine stability of salt is higher in autumn and winter due to the lower humidity, which is consistent with those of the present study (16). Another study suggested that high humidity led to loss of iodine in iodized salt (17).

On the other hand, the results of the current study are inconsistent with the study of Hassanzadeh Khayyat and Jalali Moghaddam Shari (18) who reported slight changes in iodine content of salt in different conditions of humid, non-humid, light, dark and at different temperatures over 8 months.

The authors would like to appreciate Babol University of Medical Sciences.

Copyright © 2020, International Journal of Health and Life Sciences. This is an open-access article distributed under the terms of the Creative Commons Attribution-NonCommercial 4.0 International License (http://creativecommons.org/licenses/by-nc/4.0/) which permits copy and redistribute the material just in noncommercial usages, provided the original work is properly cited.
download pdf 127.59 KB Peer Review Comments ( 111.79 KB) Get Permission (article level) Import into EndNote Import into BibTex
Number of Comments: 0