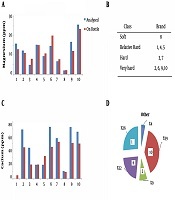 Assessment of Bottled Water Quality in Kermanshah City Based on Calcium and Magnesium Hardness: Consumer Awareness and Laboratory Studies

Today, the use of bottled water has increased significantly for various reasons, such as the low quality of tap water, presence of hazardous chemicals in piped water, ease of transport, and accessibility. Therefore, considering the quality features of bottled water is of utmost importance. The present study was conducted in the two stages of questionnaire and laboratory with the aim of determining the correlation between the quality of hardness when bottled water is purchased and evaluate the calcium and magnesium contents in the laboratory. The applied questionnaire was designed based on water hardness in four sections of knowledge and attitude, and its validity and reliability were confirmed. The calcium and magnesium contents were determined using standard methods and the inductively coupled plasma mass spectrometry apparatus. The obtained results indicated that the most important indicators of purchasing bottled water were softness availability, brand, and coldness. Contrary to consumer claims, the most commonly used bottled water (60% of the brands) were observed to be those with high hardness. Therefore, it could be concluded that factors such as availability, marketing, and percentage of the consumption market are the most important influential factors in the consumption rate of bottled water.

Today, the use of bottled water (also referred to as mineral water in Iran) has increased significantly due to the low quality of tap water, presence of hazardous chemicals in consumable water, ease of transport, and availability (1, 2). Recently, a pronounced tendency has been reported in the consumption of bottled water rather than public water distribution network systems similar to other countries. In addition, the use of bottled water has increased in areas where the quality of drinking water in the public distribution network systems is not satisfactory.

In a study in this regard, Somlai et al. (3) reported that the consumption rate of mineral water in Hungary was 28 liters per person, which had increased to 85 liters per person by 2000. Similar studies have also indicated that the consumption of bottled water is on the rise in several other countries daily. For instance, the use of bottled water in China was reported to increase from 6.4 million liters in 2001 to 8.5 million liters in 2002 due to the shortage of the consumable water supplied by public water distribution network systems. In Germany and Austria, the average rate of mineral water consumption has been estimated to be 80% per person per year (4). The rising trend in the consumption of bottled water could also be attributed to the public concerns regarding the quality of piped water, presence of disinfection by-products, water scarcity in tourist destinations (especially during warm seasons), efficient bottled water marketing, and changes in the consumer habits in recent years. Furthermore, the presence of disinfection by-products and prevention of waterborne diseases have been reported to be the major causes of the increased consumption of bottled water in industrialized and developing countries, respectively. While the leading consumers of bottled water are European countries, an upward trend has also been observed in Asia and the Pacific (15%) (5).

No accurate statistics are available regarding the use of bottled water in Iran, while some findings have confirmed the increase in consumption rates (6). Based on the definition proposed by the Food and Drug Administration (FDA), bottled water should meet specific standards, and its quality and properties must be constant. The water parameters that are based on the maximum permissible levels or primary standards are considered essential in this regard, while the established quality of bottled water is considerably costly and requires the quality control of the product. However, these measures do not seem necessary due to the market sales in the country by the production plants. On the other hand, the lack of public awareness regarding the quality of bottled water supplies has not created internal and external incentives to improve water quality. Taste and odor are the prominent water quality criteria that could be assessed easily.

The present study aimed to investigate the public awareness regarding the odor and taste of bottled water based on the hardness quality, as well as the brand importance of bottled water. Bottled water samples with popular commercial brands were assessed based on their calcium and magnesium ions and total hardness and compared with the values mentioned on the bottle label.

A questionnaire was designed and distributed among the individuals in the selected area in order to evaluate the quality of bottled water in terms of taste and odor. The questionnaire contained four types of items on the knowledge and attitude of the respondents regarding the consumed bottled water. Some of the important investigated parameters in the questionnaire included the bottled water consumption rate, consumer awareness of the taste (hardness) and odor of the bottled water, quality considerations upon purchase, and brand preference while shopping.

The inductively coupled plasma-optical emission spectrometry (ICP-OES; Perkin-Elmer, Optima 7300) was used to analyze the multivalent cations in water (calcium and magnesium), which caused water hardness. A standard solution of calcium and magnesium was prepared within the desired ranges, and the calibration curve was plotted with the coefficient of determination (R2) of 99.98. Afterwards, the samples were measured using the standard methods for the examination of water and wastewater (7).

According to our findings regarding public awareness and attitude, although 70% of the studied population used bottled water once a week, they preferred bottled water as much as the water supplied by the public distribution network systems. However, attention to the bottled water content label was less than 20%. Approximately 50% of the consumers did not pay attention to purchasing specific bottled water brands although claiming that the difference in the quality of bottled water was considerable.

As can be seen in Figure 1, the most important parameters to the consumers in the purchasing of bottled water were availability, pleasantness, coldness, and commercial brands. However, less attention was paid to the contents mentioned in the bottled water label and product quality. The results of the present study indicated that the majority of the consumers had no experience of odor in purchased bottled water. According to the findings regarding water hardness and its effect on water quality, the majority of the respondents were aware of the hardness of water (75%), while they were not aware of its permissible level (55%) and the fact that metals ions caused water hardness. In addition, the consumers considered hardness to be an important influential factor in purchasing bottled water, and approximately 25% of the respondents felt water hardness to some extent. 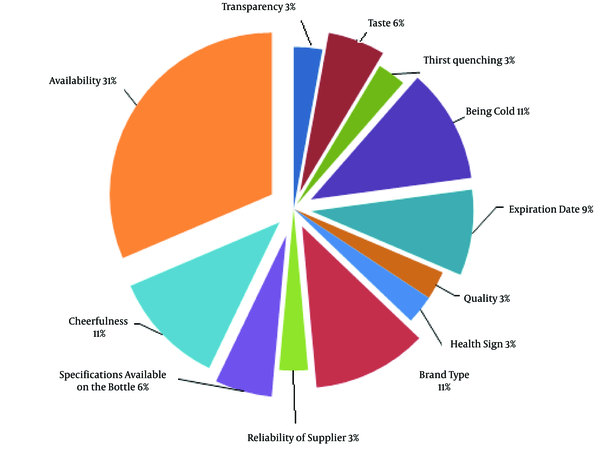 The most important factors in preparing bottled water

In the next phase of the study, water hardness was assessed based on the contents in the questionnaire. Moreover, the contents of calcium and magnesium ions in the bottled water samples were analyzed (Figure 2A and B). The measured values were compared with the values mentioned on the bottle label, and it was observed that in most brands, the measured values were higher than the values labeled by the manufacturer. The difference in the magnesium content was lower compared to calcium ions. However, the levels of calcium and magnesium ions and hardness were below the standard limits in all the studied samples. 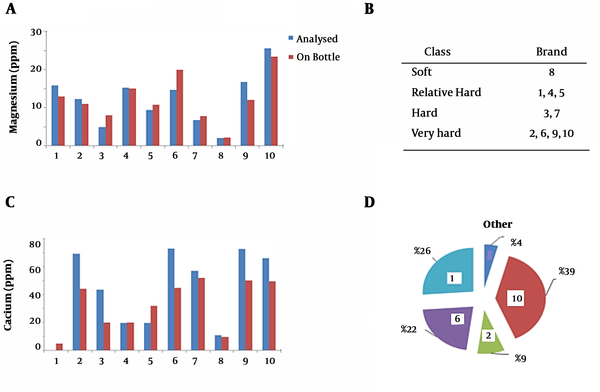 Figure 2C shows the classification of various brands based on water hardness classes. Accordingly, more than 60% of the samples were classified as hard and very hard water. In addition, the maximum total hardness was observed in samples two, six, nine, and 10 (40% of the brands), while the minimum value was observed in sample eight (10% of the brands). Approximately 30% of the samples were classified as relatively hard water, and 20% were categorized as hard water.

As is depicted in Figure 2D, despite the high degree of hardness in the commercial brands with high hardness, they were regarded as the best-selling brands of bottled water. This is consistent with the results obtained by Loloei and Zolali (5), which indicated that Damavand and Koohrang commercial brands of bottled water were classified as hard water, while Vata bottled water has been categorized as soft water, which is in line with our findings. In another research, Mosheri et al. (8) reported that the bottled water distributed in Tabriz City (Iran) was 50% hard, 10% very hard, 20% relatively hard, and 20% soft water. Moreover, the mentioned study demonstrated that the measured values had significant differences with the values mentioned in the content labels of the water bottles (8).

Hygienically, excessive water hardness may cause indigestion, kidney stones, and cardiovascular mortality. Moreover, the acidity of water is regulated by the hardness of water, thereby influencing the reabsorption of calcium and magnesium in the renal tubule. On the other hand, the levels of calcium and magnesium could contribute to gastric cancer, Alzheimer’s disease, and cerebrovascular diseases (13-15).

According to the results, the consumed amount and commercial brands of bottled water were affected by the changes in the public culture, pleasantness, accessibility, coldness, brand name, and expiration date. A high percentage of the general sample population in the study (70%) had a public attitude toward the hardness factor in drinking water. Contrary to the findings regarding the public awareness of water hardness, the most commonly used bottled water brands were those classified as hard water based on the calcium and magnesium content.

Copyright © 2020, International Journal of Health and Life Sciences. This is an open-access article distributed under the terms of the Creative Commons Attribution-NonCommercial 4.0 International License (http://creativecommons.org/licenses/by-nc/4.0/) which permits copy and redistribute the material just in noncommercial usages, provided the original work is properly cited.
download pdf 283.42 KB Peer Review Comments ( 94.16 KB) Get Permission (article level) Import into EndNote Import into BibTex
Number of Comments: 0