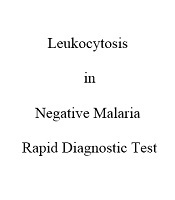 Definitive tests are not routinely available in Ghanaian district hospitals for diagnosing febrile illnesses among children under five years after excluding malaria with the rapid diagnostic test (RDT). Most of such febrile presentations are likely microbial. If an infection-induced WBC elevation is demonstrated consistently enough in such malaria-RDT negative febrile illnesses, it could become a diagnostic aid.

Retrospective data from the clinical records were obtained for 432 children from 6 months to 5 years of age, who had presented with fever (temperature ≥ 37.5°C). Their respective WBC counts were also documented and statistical analysis of the data carried out.

A significant relationship was demonstrated between the malaria-RDT negative status and the patient’s elevated WBC count (P < 0.001). Leukocytosis was absent in 58.6% of RDT-negative febrile children. Patients who tested RDT-negative were twice as likely to have elevated WBC counts (OR = 2.19) than RDT-positive patients.

An elevated WBC count has demonstrated a potentially weak relationship with a negative malaria-RDT status among febrile children U-5 in DPH. Standing alone, however, the WBC may not be decisive for the evaluation of U-5 febrile presentations after excluding malaria.

The febrile child presents a diagnostic dilemma to many clinicians in Ghanaian district hospitals, especially when the initial malaria-RDT is negative (1). In a national survey of 2,557 children under five years who had developed a fever in the preceding fortnight, malaria-RDT positive status was documented in 36.4% (2). This was a drop from the 48% RDT-positive prevalence rate observed in the 2011 Ghana - Multiple Indicator Cluster Survey (MICS) (2). These findings suggest that a sizeable population of febrile children under-5 may not have malaria (3) and require, perhaps, further investigations to ascertain their diagnosis and, subsequently, the appropriate treatment. The actual proportion of malaria-related U-5 febrile illness presenting to district hospitals in Ghana has been suspected in some studies to be much higher than reported in the national surveys (4). However, observations from other studies conducted on the continent support the decline in the magnitude of malaria’s dominance as the commonest cause of childhood febrile illnesses in the sub-region (5, 6).

A high WBC count, also termed leukocytosis, is used to describe an assay value greater than 11,000 per mm3 (11 × 109 per L) (7). It is mostly what the bone marrow responds with in the event of an infection or an inflammatory process (7). Some prominent studies in Africa have presented findings which purport non-malarial microbial infections as increasingly important causes of childhood febrile illnesses (8). In a study among febrile out-patient children under ten years in Tanzania, malaria was found in 10.5%, viral infections in 70.5%, and bacterial infections in 22%; microbial infections depicted here as being the commonest causes of non-malarial febrile illness in this study population (9). In another retrospective study among hospitalized patients, infections were proven to be the commonest cause (52%) of elevated WBC (greater than 15,000/mm3) (10). These findings seem to build some ground for the potential use of the WBC count as a proxy for an ongoing infectious illness, especially when it is readily available as is the case in most limited-resource district hospitals in Ghana.

It has been a long held clinical fact in many guidelines that the elevation of the WBC count in the setting of fever is highly likely to be the result of an infectious process (11). Zubler’s original study on infection-related leukocytosis, by employing a limited number of participants (n = 99), did not identify any statistically significant relationship between the presence of an infection and an associated elevated WBC count (11). After malaria has been ruled out in an acutely febrile child U-5 presenting to a typical Ghanaian hospital, the next likely cause of this illness could be safely presumed to be from a bacterial or viral infection. In such a case, finding an elevated WBC could be a very useful diagnostic accessory, especially if it is observed to be elevated consistently enough in a convincing majority of such patients.

Coinfections, sometimes, could prove challenging in the determination of the primary pathology causing a fever. D’Acremont et al., in their two-centre non-ramdomized study in Tanzania discovered 22.6% of their 1005 study participants had coinfections (9) while this was the case in 6% of the 682 participants evaluated by Guillebaud et al. (3). However, be it viral, bacterial or polymicrobial in etiology, febrile leukocytosis once confirmed, would still support the likely association with some form of infection in most tropical settings among children under five years of age. Some studies have gone ahead to attempt confirmatory tests without very convincing results. In one of these works after administering specialized tests, the vast majority (59.5%) of febrile childhood illnesses did not demonstrate an identifiable causative agent (3). From this particular study, it may be inferred that the quest for an exhaustive panel of specialized diagnostic tests for tropical infections among children would, perhaps, not be cost-effective after all. Additionally, these specialized testing techniques employed in such studies, including rapid point-of-care diagnostic tests, may not soon be readily available and affordable in many parts of Ghana.

This retrospective study was carried out among children under five years in the Dormaa Presbyterian Hospital to analyze any such relationship which could be found to exist between the occurrence of febrile presentation and the concurrent finding of an elevated WBC count after malaria had been excluded.

The study was retrospective as well as cross-sectional in design utilizing secondary data. Archived information on febrile children reporting to Dormaa Presbyterian Hospital between March and June, 2014 were retrieved for this research.

The Dormaa Presbyterian Hospital is situated in the Dormaa Municipality of the Brong-Ahafo Region of Ghana. Because this location is in close proximity to the western Ghanaian border with Cote D’Ivoire, some Ivoirians neighbours occasionally cross into Ghana for healthcare in this facility. It serves as the referral centre for many other clinics, health centres and private hospitals in the catchment area. The hospital has a dedicated 24-hour pediatric department headed by a paediatrician.

Information for this study was obtained from the hospital folders of children older than 6 months and younger than 5 years reporting to the paediatric unit of Dormaa Presbyterian Hospital with a temperature of 37.5ºC and above. These patient records also contained a minimum of the malaria-RDT and complete blood count (CBC) assay reports. The study comprised existing records of both in-patients and out-patients in that period in the past who met the study criteria.

In the pediatric unit, eligible participants for this research were compiled from the legers at the records office. The data was non-randomized and entries continued till the target sample was attained. Using the formula, n = p (1 - p) z2/d2, with P = 0.5 (for an unknown population), z = 1.96 and d = 0.05, the calculated sample size was 385 but a total of 432 had been realized at the close of the retrospective recruitment and utilized as it was, to enhance result reliability.

The data retrieved included temperature, malaria-RDT status, WBC count and hemoglobin (Hb) levels. Data from patients who had a hemoglobin level below 7.0 g/dL was excluded because reactive reticulocytosis was assumed, in such a situation, to represent a confounder for the observed WBC count.

SPSS V. 20 software was utilized in the data analysis and the results of study have been presented using descriptive and analytical statistics with chi-square test (χ2), confidence intervals (CI), P values and odds ratios (OR).

The hospital management and the pediatrician of the unit gave their express permission for the study to proceed and granted access to the needed records. The Committee on Human Research, Publication and Ethics (CHRPE) of the Kwame Nkrumah University of Science and Technology (KNUST) also has given the ethical approval for the study (CHRPE/AP/469/19).

The table below (Table 1) is a two-table representation of the data obtained for this study analysis comparing the Malaria-RDT status of febrile children under-five years with their WBC counts. The null hypothesis for this test of association was that the malaria-RDT negative status in febrile children U-5 did not have any relationship with the WBC count observed.

Not many recent studies have investigated the infectious causes of leukocytosis among children under five years, who present with fever to Ghanaian hospitals. Some research work done to evaluate Ghanaian hospital presentation of U-5 febrile illnesses has disclosed the existence of higher malaria prevalence rates (61.9%) (4) than the reported national estimate of 36.4% (2). With such evidence, the routine administration of the malaria-RDT for febrile illness among children U-5 continues to be justified in these high prevalence settings. This approach, however, still does not offer much assistance in resolving the diagnostic challenge (11) posed by non-malarial U-5 febrile illnesses. It must be recognized that not all non-malarial febrile illnesses in children are infection-related (12) and the importance of a thorough clinical assessment in obtaining an accurate diagnosis cannot be overlooked (12, 13). Haematological cancers in children under five years, which could also be a cause of febrile leukocytosis, are not as common and have been reported to constitute about 6.7% of all childhood cancers in Ghana (14). For these reasons, a vast majority of childhood febrile leukocytosis could be considered to be infectious until proven otherwise.

This study demonstrates a significant relationship between the malaria-RDT-negative status and the occurrence of an elevated WBC count in the same patient, [χ2 (1, n = 432) = 14.15, P < 0.001] (Table 1). The true nature of this relationship, however, should be the subject of further studies in this population. The strength of this relationship is suspected to be rather weak because the majority of malaria-RDT negative patients (58.6%), still had normal WBC counts. This unanticipated finding should be evaluated further in a larger study in the future employing regressional analysis. Again, this study was limited by the inability to make any manipulations retrospectively to account for coinfections. It is not unusual in endemic communities for malaria to be present in the same patient alongside other leukocytosis-eliciting microbial infections but this situation could not be accounted for in the study because of the stated objectives. Occasionally, febrile presentation among children under five years have nothing to do with any pathogen (3, 9) and this could be one reason, perhaps, for which more than half of RDT-negative febrile children were observed to have normal WBC counts. This significance of this category of patients should be appreciated and examined in any future studies.

Another interesting outcome in this focused analytical study was the finding that malaria-RDT negative febrile patients were about twice as likely to have leukocytosis compared to malaria-RDT positive patients (OR = 2.19). This may not be too surprising a finding. However, a much higher odds ratio would have made a stronger case for the WBC as a diagnostic accessory. Nonetheless, this study has taken a vital step to establish the evidence in DPH that U-5 fevers not associated with malaria were more likely to be associated with leukocytosis. Its clinical relevance, however, is not guaranteed from only these results. It remains reasonable then that, for now, established diagnostic guidelines (15, 16) for childhood febrile illnesses would continue to be in clinical use while more research in the area is carried out.

There is a rising proportion of malaria-unrelated febrile illnesses among children under-five years across the African continent. It is, therefore, expedient to obtain accessible and affordable diagnostic evaluation for such patients. An elevated WBC count has demonstrated its potential for possessing some relationship with the malaria-RDT negative status of febrile children U-5 in DPH and thus predicting the presence of an infection. Standing alone, however, the WBC count would not be decisive for non-malarial infections in U-5 febrile illnesses because of the relatively weak relationship discovered in this study. More research is required to develop locally relevant diagnostic guidelines that could incorporate the WBC count.

Copyright © 2020, International Journal of Health and Life Sciences. This is an open-access article distributed under the terms of the Creative Commons Attribution-NonCommercial 4.0 International License (http://creativecommons.org/licenses/by-nc/4.0/) which permits copy and redistribute the material just in noncommercial usages, provided the original work is properly cited.
download pdf 134.59 KB Peer Review Comments ( 113.20 KB) Get Permission (article level) Import into EndNote Import into BibTex
Number of Comments: 0